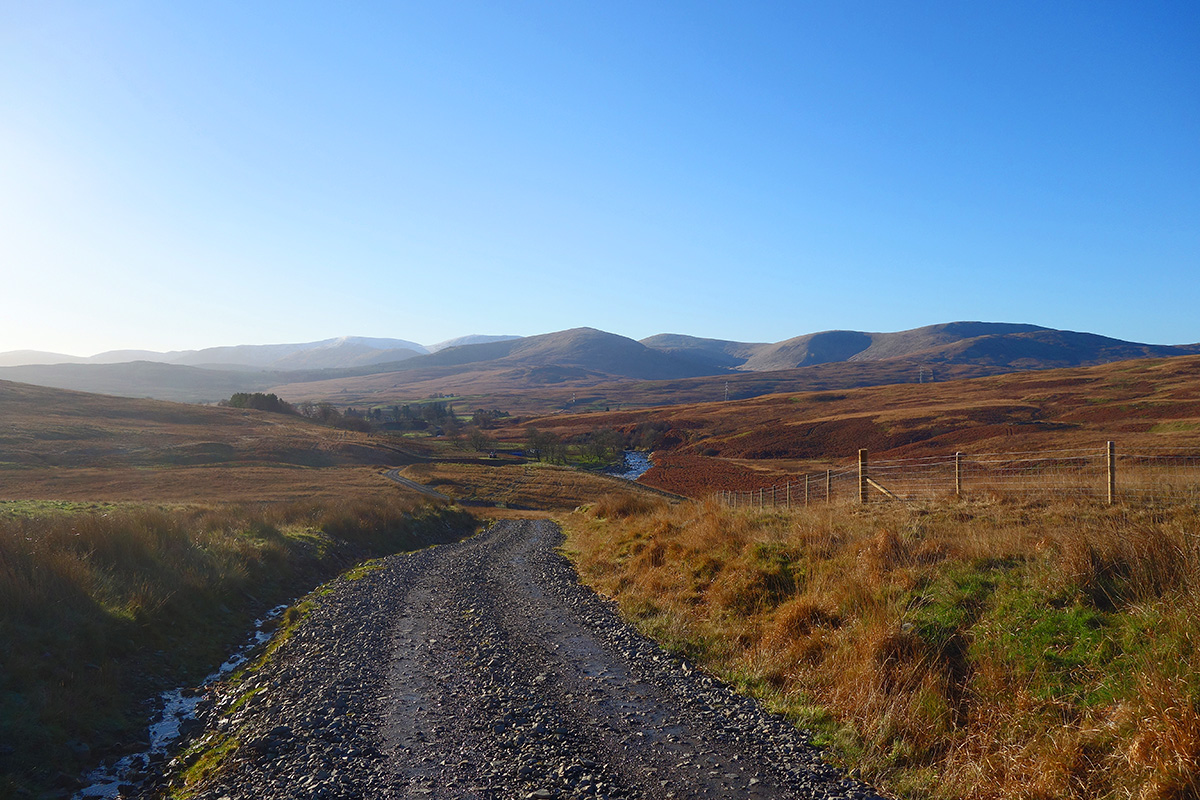 Cairnsmore of Carsphairn is the most northerly of the Dumfries & Galloway Corbett’s, sitting to the north-east of the little village of Carsphairn on the A713 road that links Castle Douglas and Ayr.

A lovely hill that I’ve bagged before, it has been absent from the blog for far too long and has been on my to-do list since the very beginning. So, over the 2021 Christmas period with the freshly-fallen snow, I decided to set off with my camera and my sidekick to bag the final Corbett of the Southern Uplands.

Sitting at an altitude of 2,615ft, Cairnsmore of Carsphairn is quite an ‘easy’ Corbett, with a well-marked route and a path all the way to the summit. I knew there had been quite a bit of construction work on the farmland at the start of the walk and I was curious how much different it would be from what I remembered.

As it turned out, things were actually better than when I’d walked it years ago! 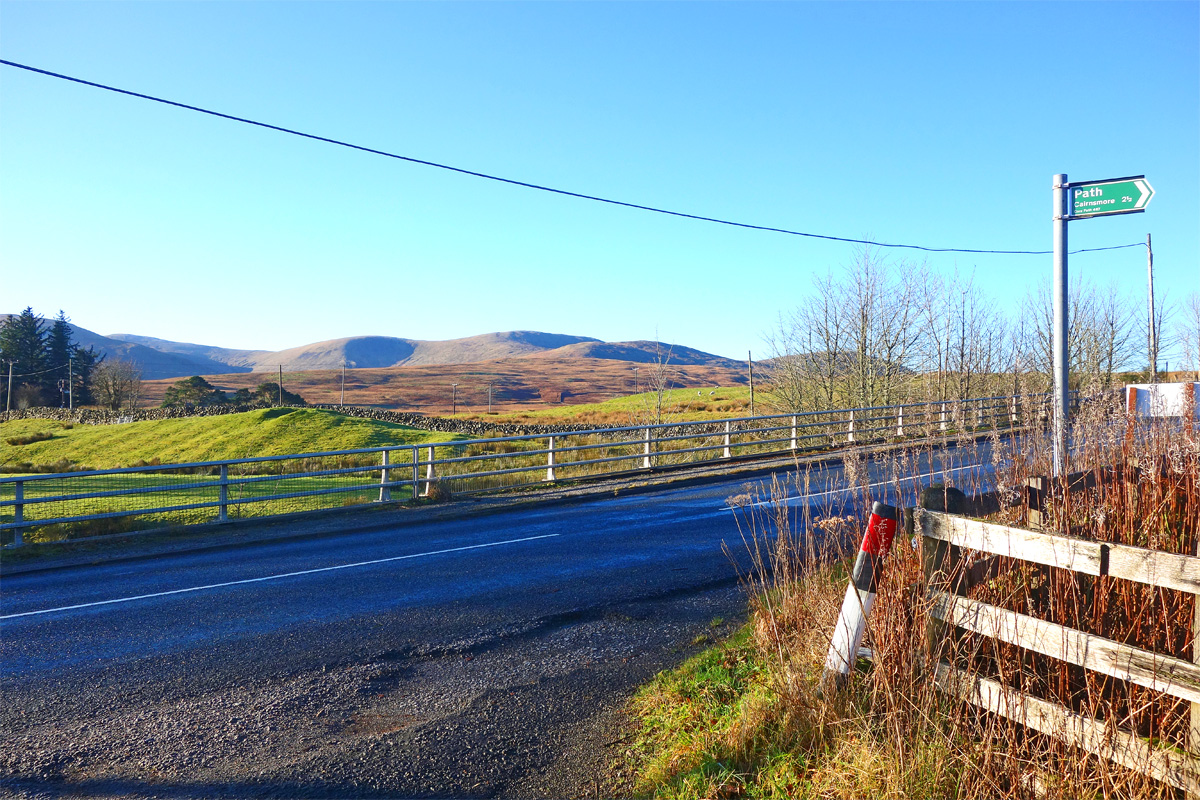 A Stunning Day for a Walk

Parking in the large but narrow parking area before the bridge at the Water of Deugh, I booted up and enjoyed the beautiful sunny morning. It was bitterly cold and all the puddles around me were iced over: the soundtrack of the little river to my side was making things really atmospheric.

I crossed the road to the little house at Bridgend that sits next to the well sign-posted route. I immediately noticed that the track had been re-done with fresh gravel and was in much better condition from walking than it once was. What really caught my eye though was the additions that had been made to the signage! 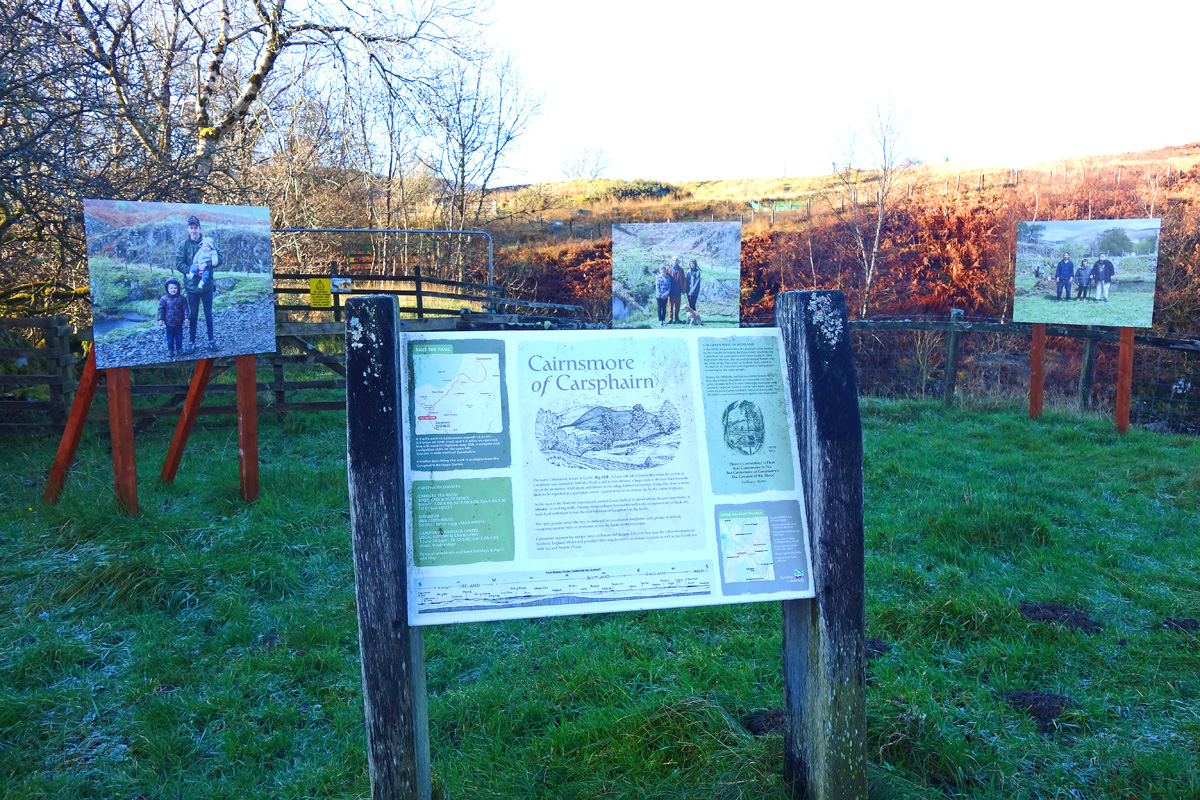 Surrounding the old Cairnsmore of Carsphairn sign is a free-standing gallery of various walkers images: something I’ve never seen before! It makes for an interesting start to the walk and really gives you the feeling of the wide array of walkers who have been here before you.

I had a wee read of the information board and set off along the easy track. There wasn’t a cloud in the sky and the views were gorgeous in all directions. I was already thinking about what the summit views would be like as Messi and I headed alongside the Water of Deugh, pausing regularly to take pictures. 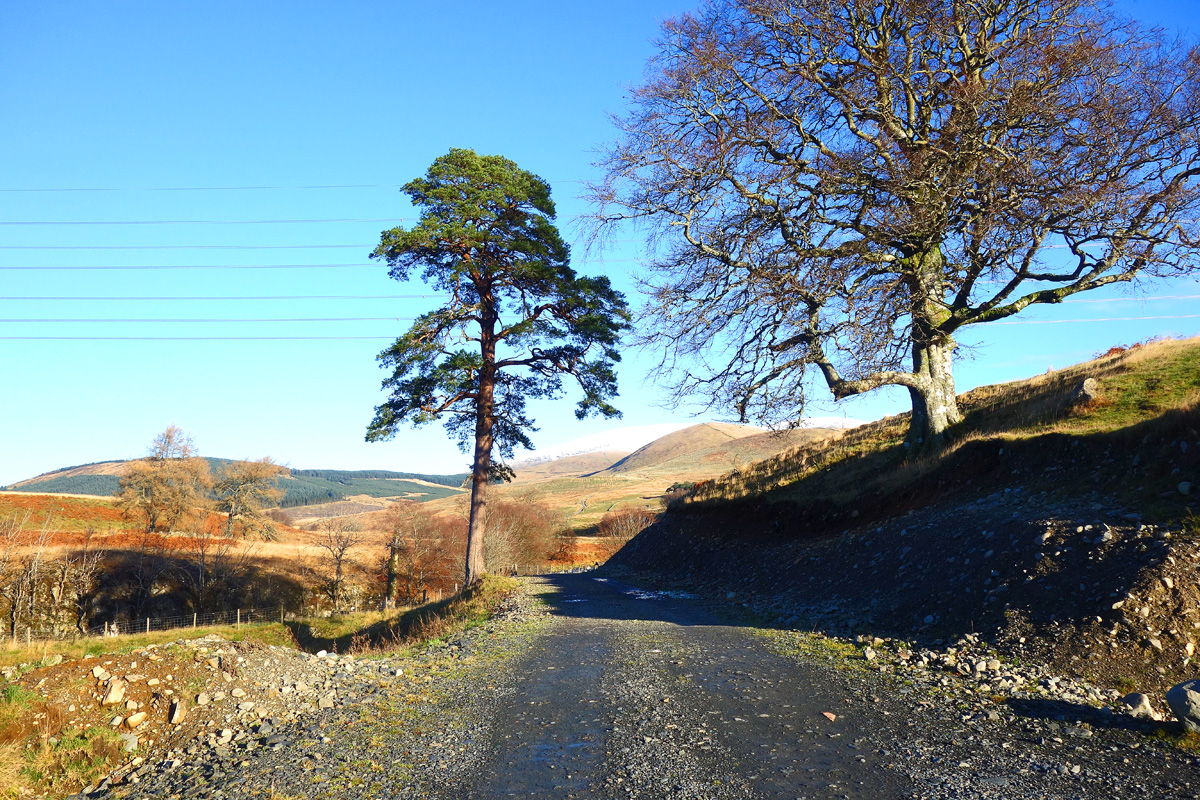 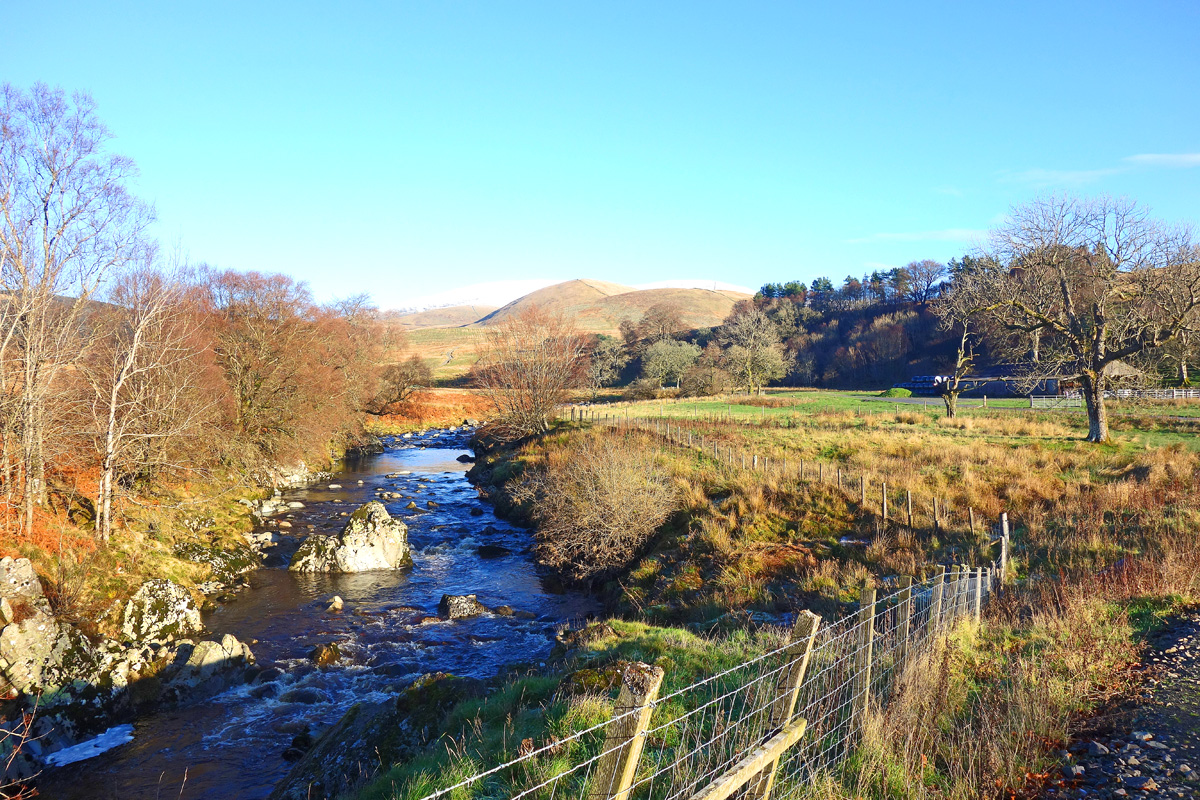 The Water of Deugh Runs Alongside the Track

Cairnsmore of Carsphairn really is a wonderful Corbett for a beginner, between the smaller altitude, easy track and beautiful views it’d be a perfect hill to start someone off with. The final ascent isn’t too steep and the summit is wonderfully flat also.

The freshly laid track was making the walking very easy and I just couldn’t stop taking pictures. The views back to Corserine and the Rhinns of Kells were already stunning. 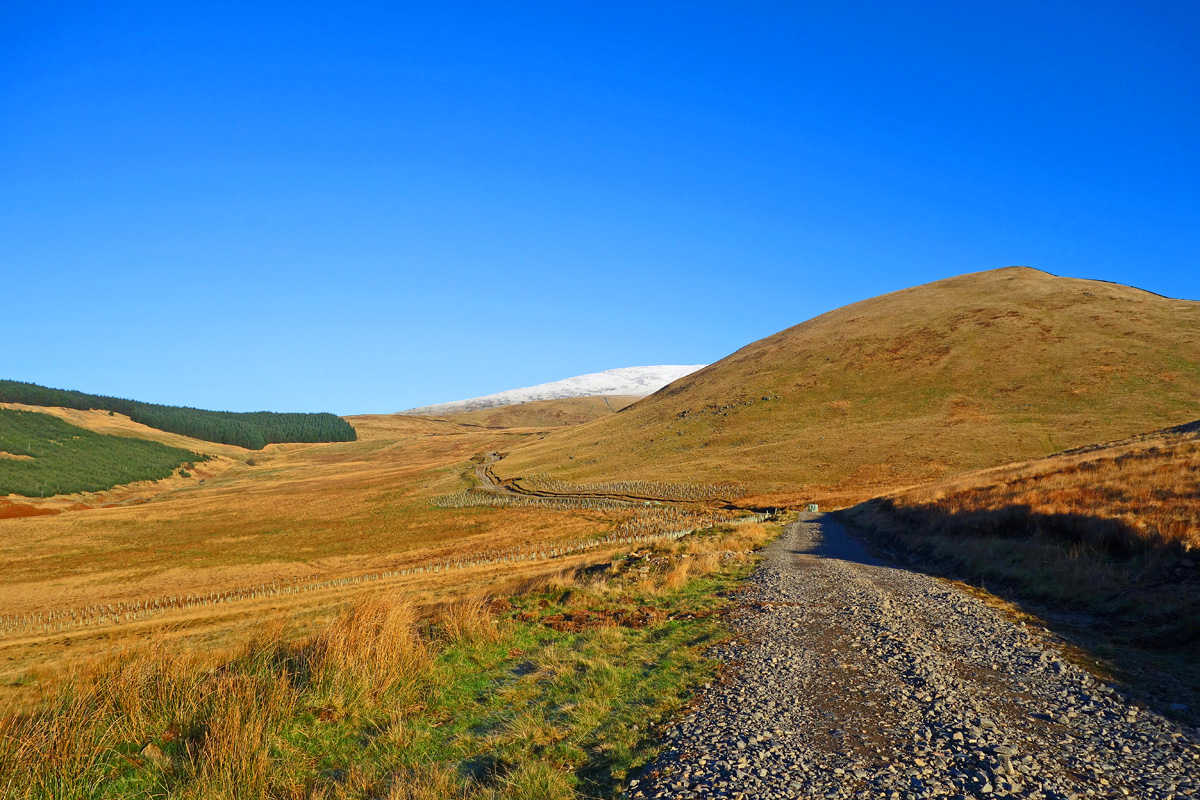 The Snowy Top of Cairnsmore of Carsphairn Comes Into View

The path gently began to climb upwards before arriving at a muddy parking site for work vehicles. They were clearly still working on extending the track further and it was here that the new track ran out and forked at a stone dyke. 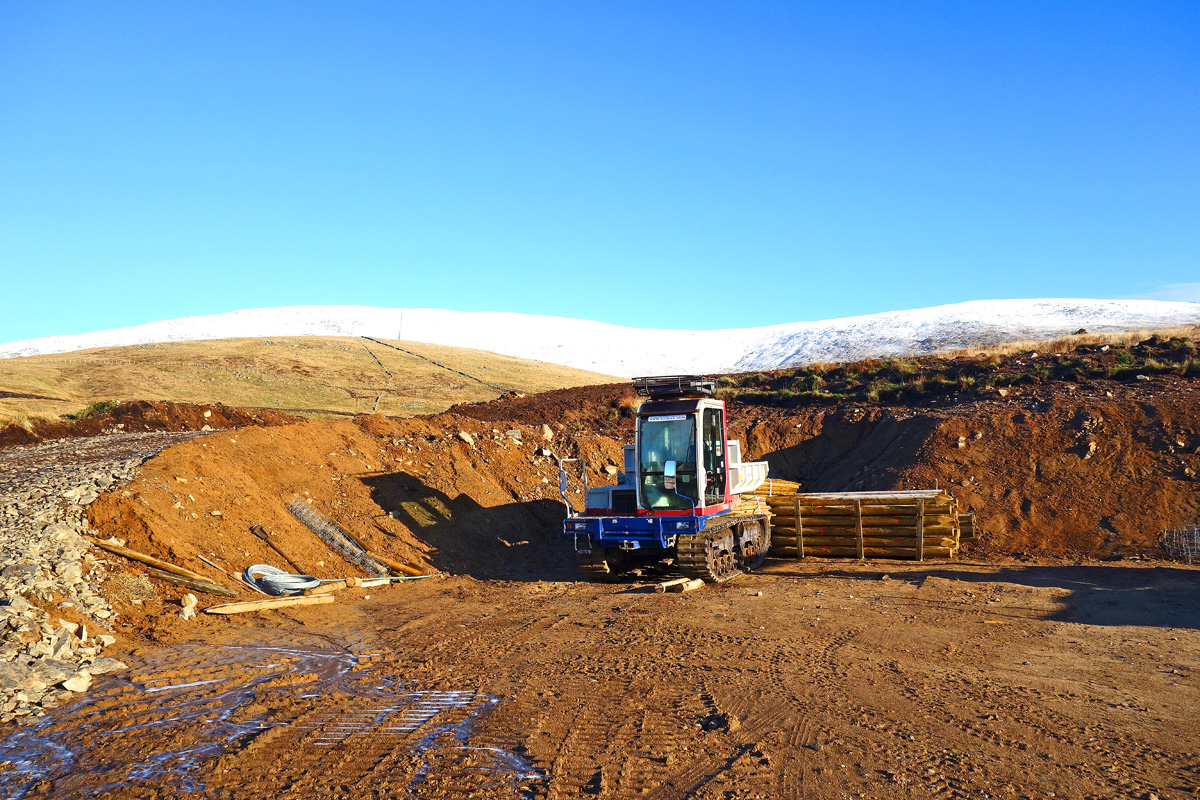 The Dug-Out Work Area Behind Which the Track Ends

I’d suggest taking the route to the right over a nice little wooden bridge and following the dyke all the way to the summit.

It was around midday by this point and I knew it wouldn’t be long before I was on the summit and I was looking forward to crunching through some of the snow that lay ahead.

What I hadn’t anticipated was it being knee-deep! 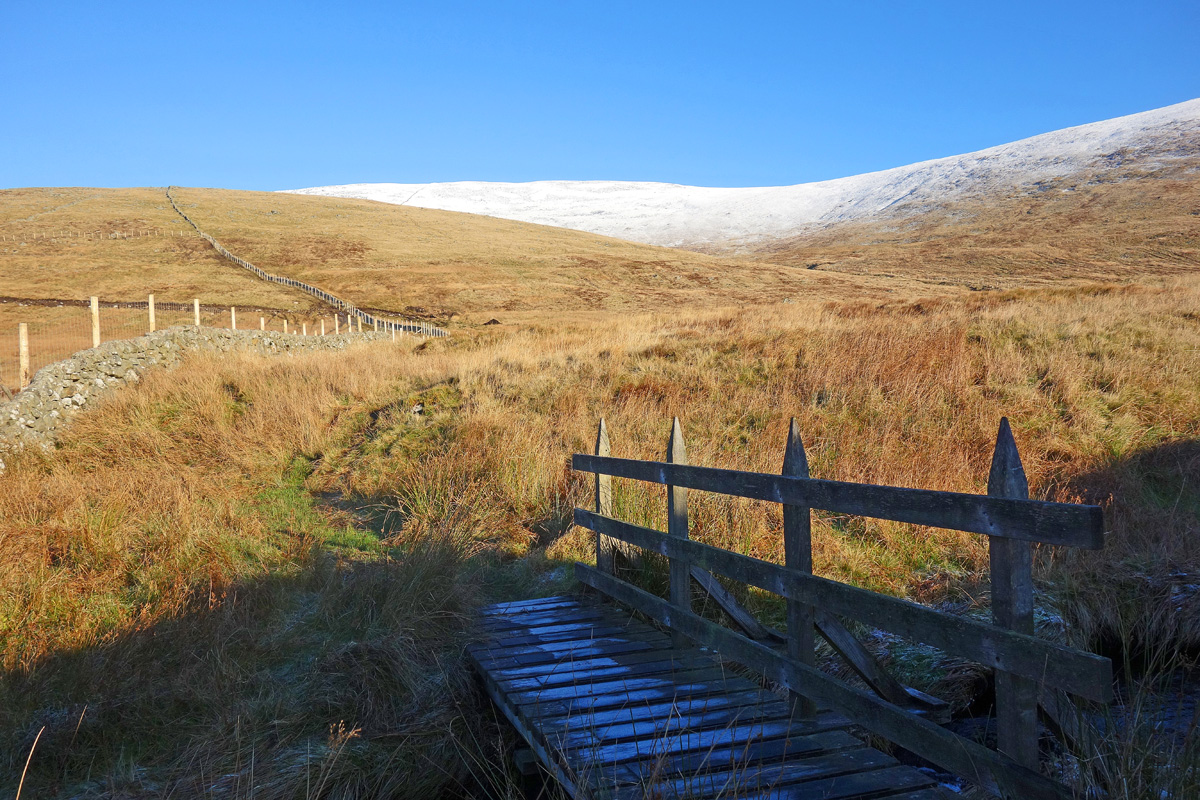 The Wee Bridge and the Push to the Summit Begins!

The ascent began easily enough but once we reached the snow-line things slowed down and I could feel my legs were getting more of a workout as my legs sank deeper and deeper the more we climbed. I love a good winter walk in the snow: often I can’t help but feel like an arctic explorer, out alone in the wilds.

Snow always has a way of making the mountains of Scotland even more dramatic but they were slowing me down too. Rest-stops were becoming a little more common as I caught my breath and prepared to push further. Each time, Messi would sit and stare at me with that all-too-familiar look on his face that says “This is easy. How can you be tired?”. 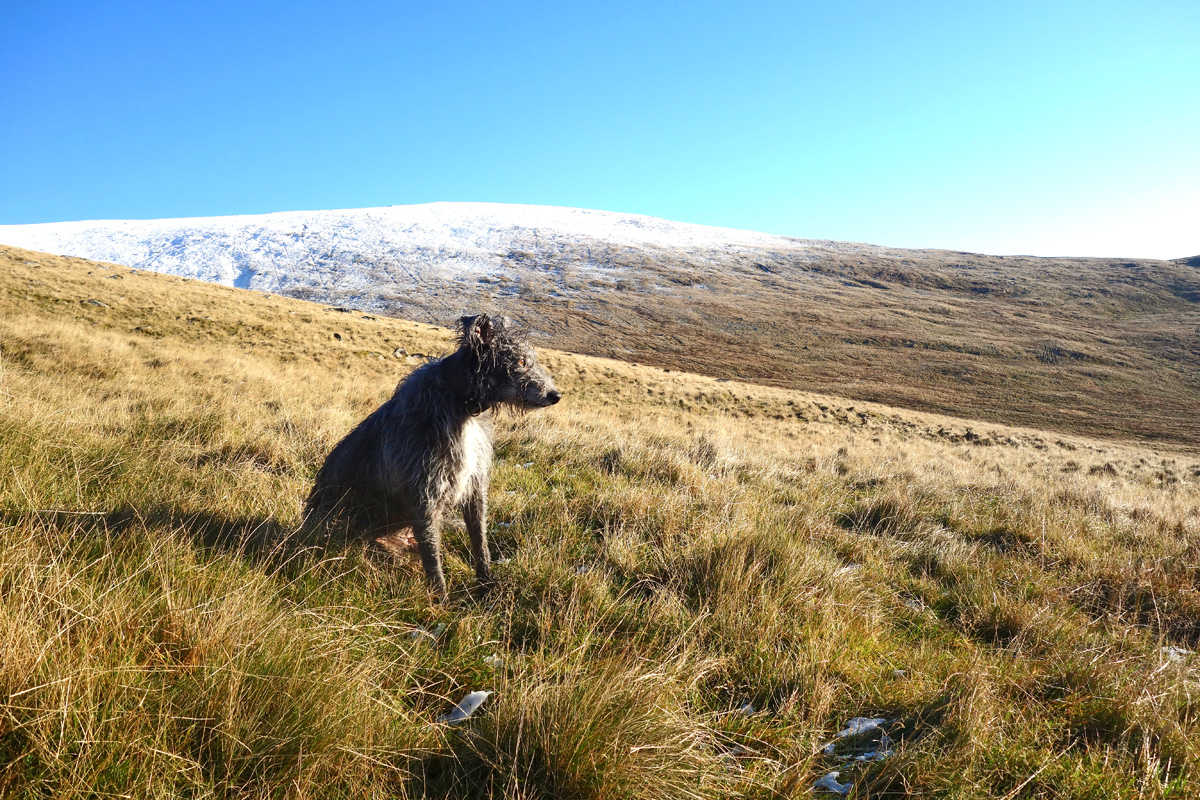 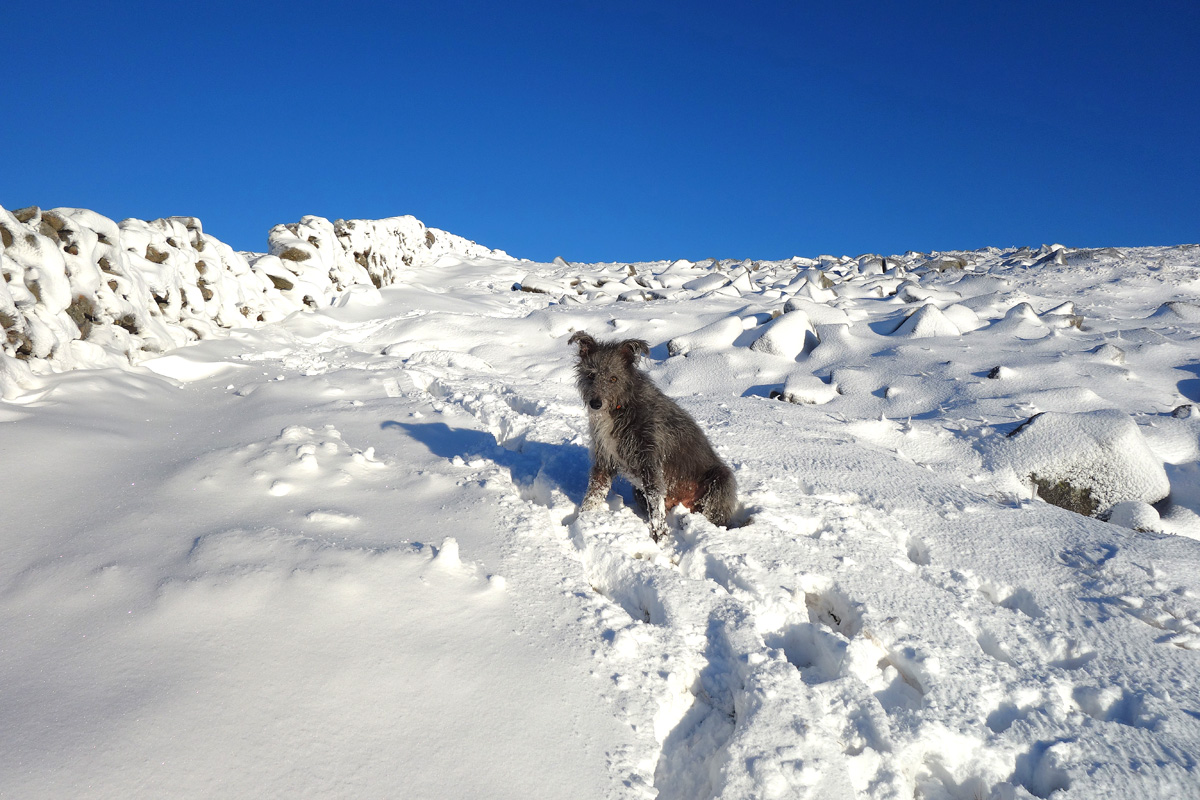 A Bum That Feels no Cold

I was having a great time, trudging through ever-thickening snow and marvelling at the endless sea of blue that was above me. The shade of blue that paints the sky on these cold Scottish winter hill days really is something to behold and is only made more vibrant by the cold, white snow beneath it. 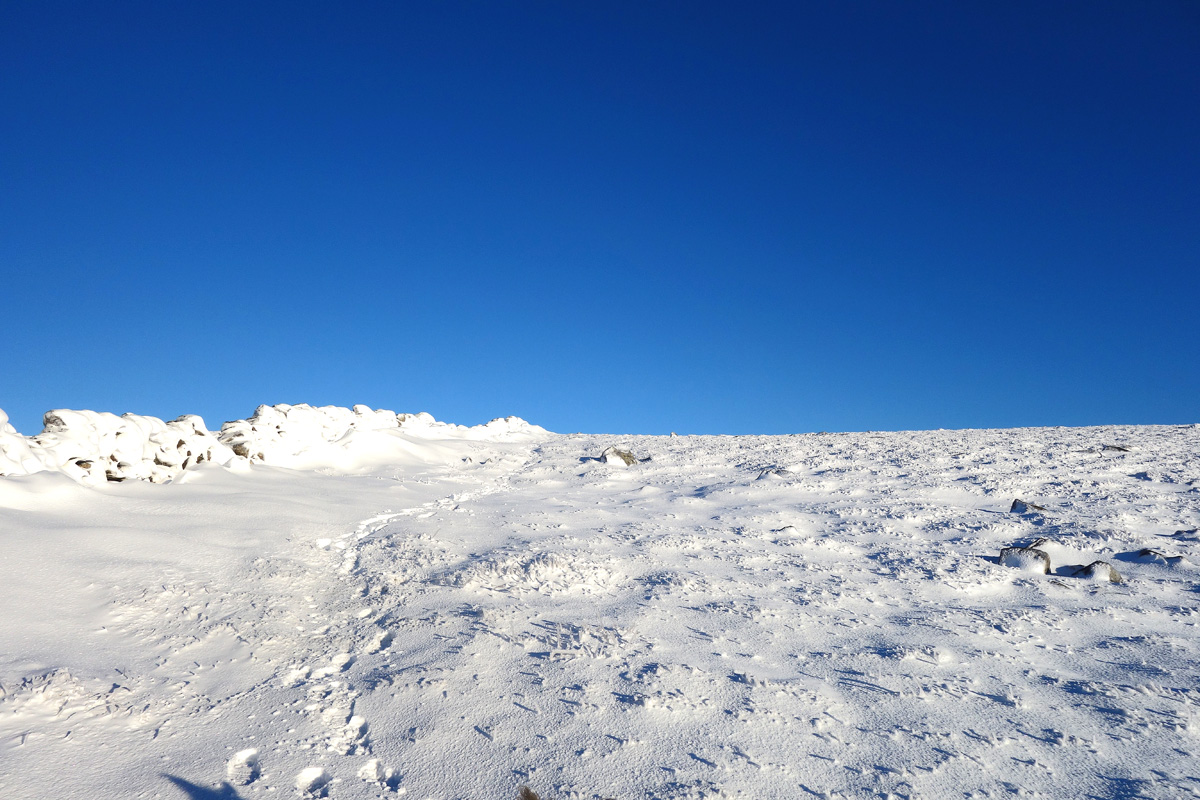 The Final Push to the Summit

One lone walker appeared above and I skillfully used the opportunity to catch my breath. I said “Hello” as he descended and tried to look cool as I got some oxygen into my lungs. I took and deep breath and pushed on, coming over the ridge and immediately being over-awed at the scenery that surrounded me. 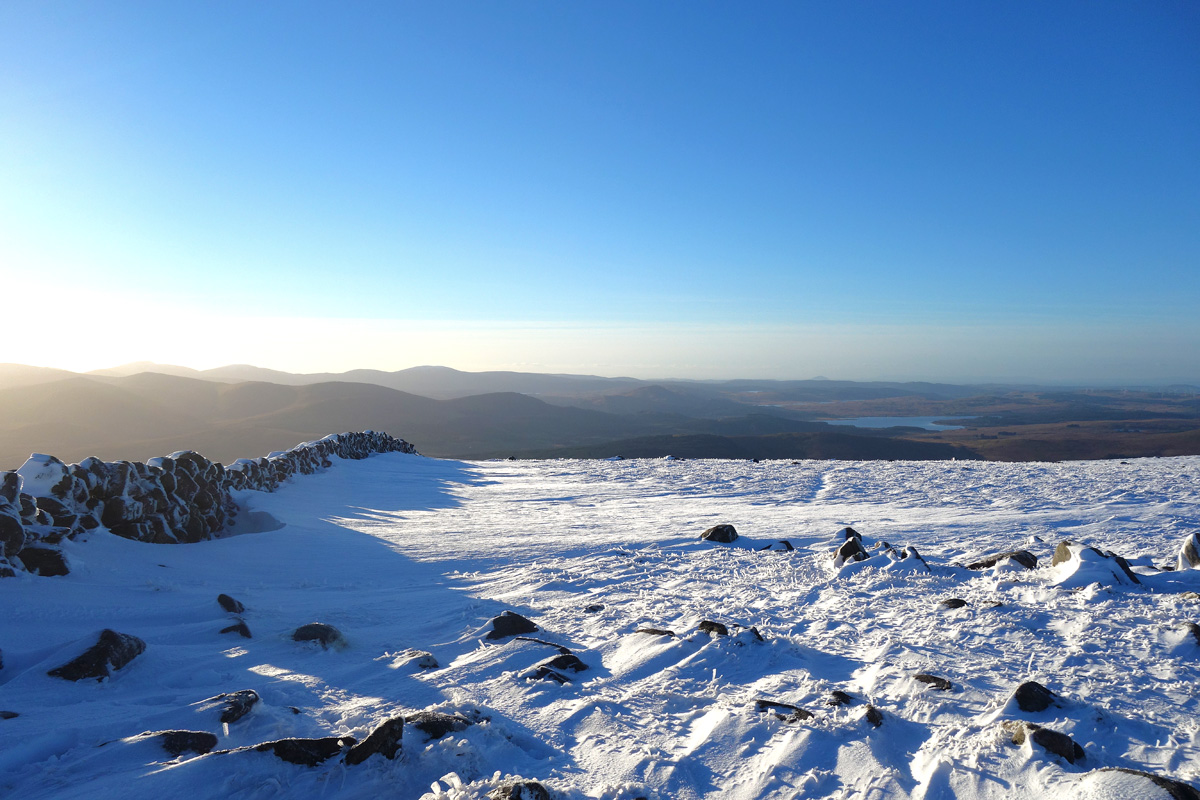 As the trig cairn came into view I was shocked to see a group of walkers surrounding it. They seemed to be packing up their lunch and getting ready to head off and I was delighted that I was about to have the summit all to myself. I waited for them to depart while taking in the views and I knew I’d get a chance to snap a nice picture of them heading away from the cairn. 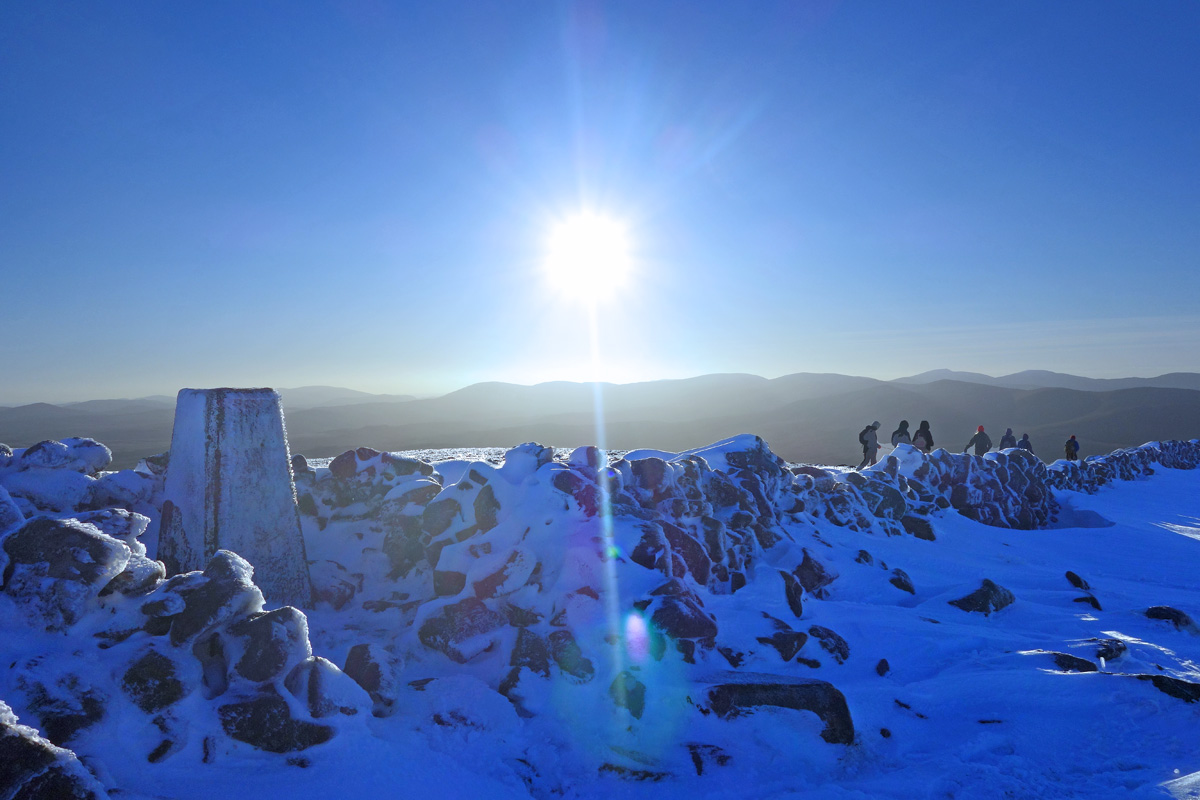 The Group Leaves the Summit

One thing that was becoming very apparent was the cold. If you’ve been on a summit in Scotland in winter you know what I mean. It had been cold at the car when I set off but at 2,615ft with a very strong summit wind it wasn’t long before my fingers were turning that pinkish shade and I was digging out my thermal gloves.

It was really cold.

I handed Messi his pork pie (which seems to be his favourite thing in the world) and hastily took some pictures.

The views were phenomenal in all directions, with barely a cloud in the sky and sweeping views into Ayrshire (and out to Ailsa Craig and Arran), the Solway Firth and towards Glasgow. 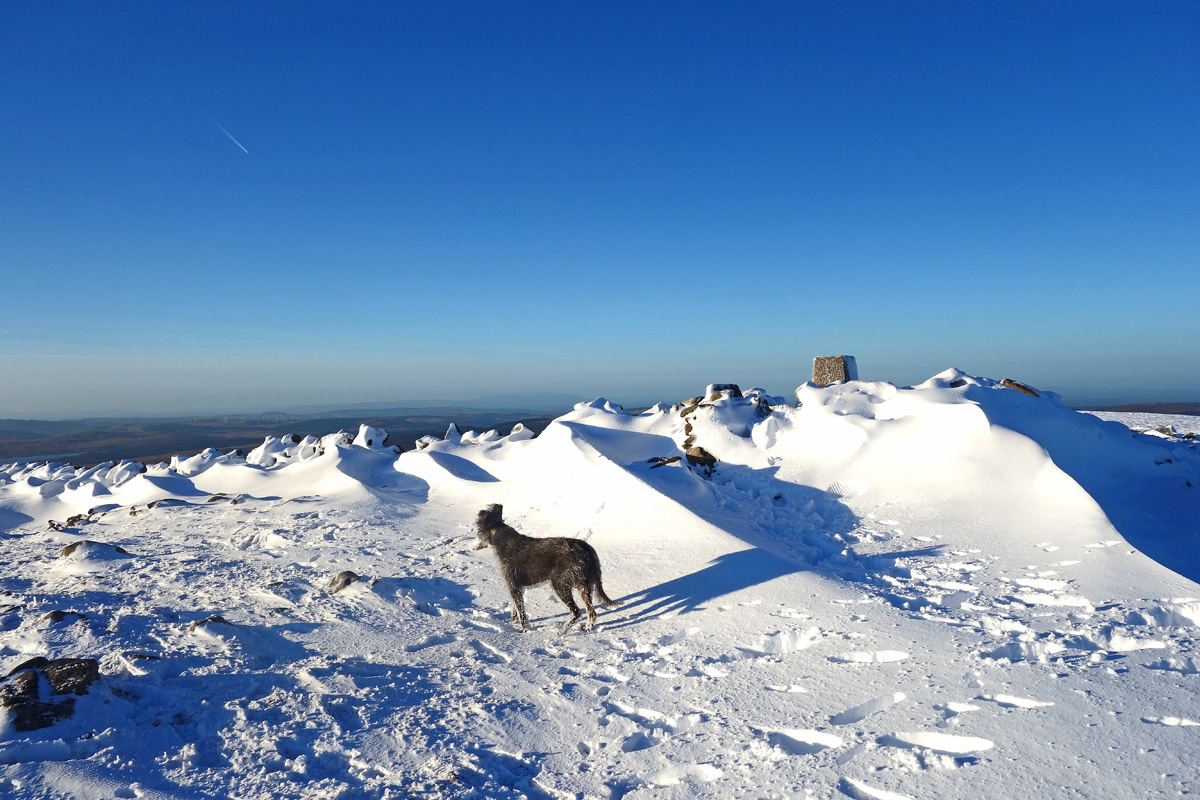 Messi Post-Pie at the Cairn 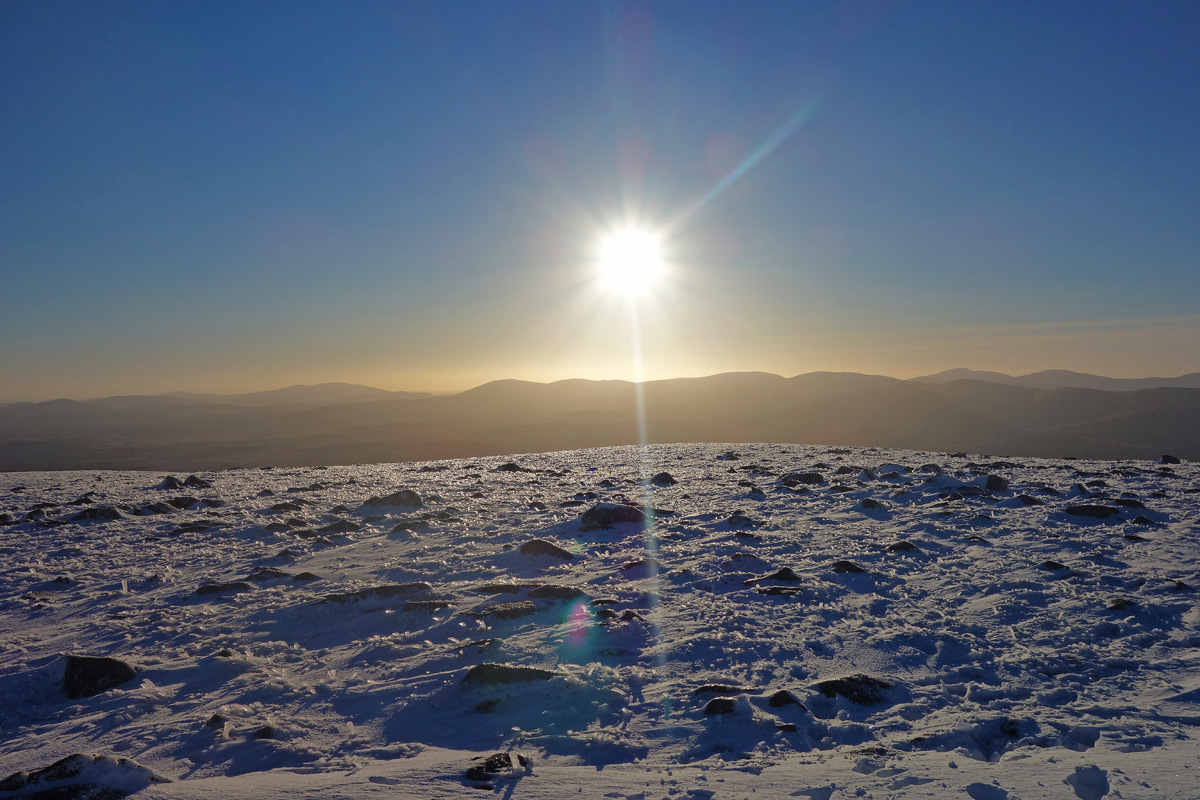 The Stunning Views South With the Lowering Sun 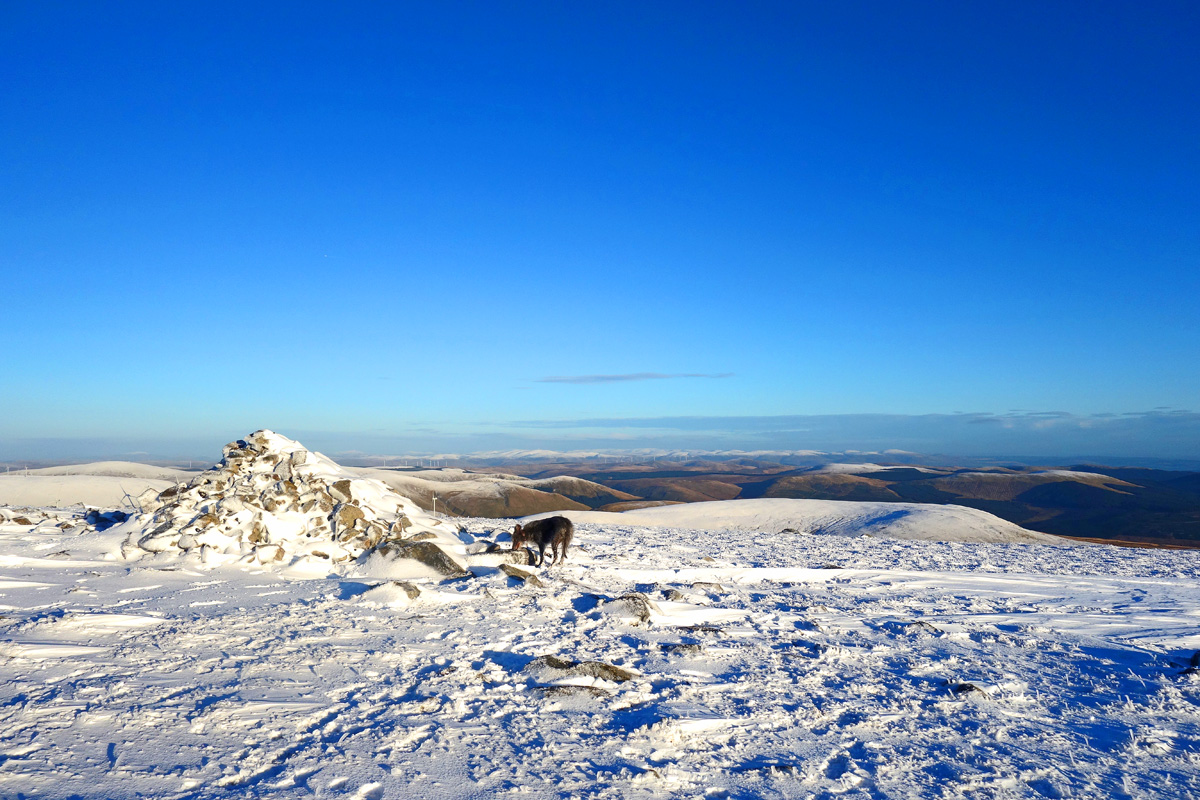 Messi Inspects the Cairn With Endless North-Easterly Views Behind

One necessity of the route for me is to descend via the Black Shoulder and Dunool, the two little subsummits to the south-west of Cairnsmore of Carsphairn. This makes the walk more interesting and makes for a lovely descent beside a stone dyke, directly facing the Rhinns of Kells.

I noticed only one set of prints in the snow for my chosen route and was surprised that almost nobody had been bothering with it! It certainly makes for a better walk and so we set off…and immediately started sinking into deeper and deeper snow.

I was up to my knee’s with Messi beside me, hopping like a rabbit through mountains of soft snow while I stumbled around. For some reason this image of us both was very funny to me and I must have looked like quite the weirdo laughing hysterically while stumbling and falling. All that was missing was the Benny Hill theme. (I’ve been on the summit before, I should stress, so I knew there were no hidden drops or dangerous crags). 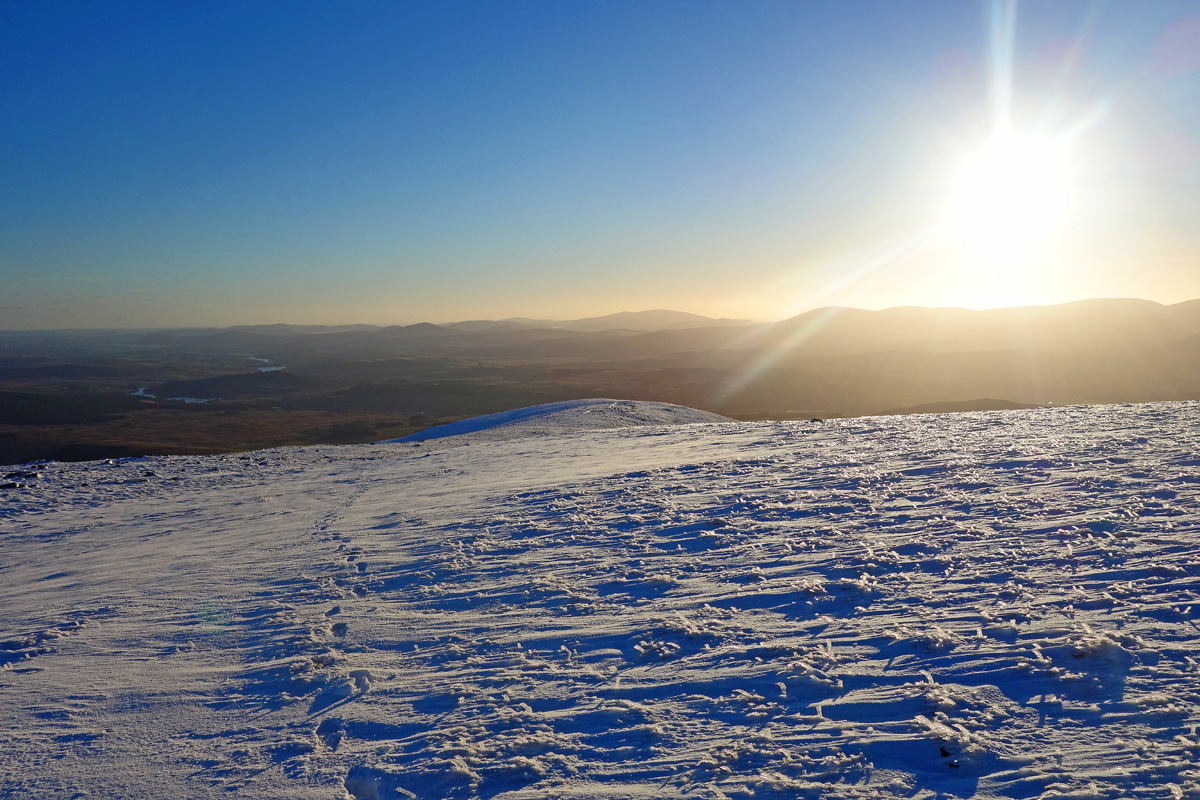 Lone Tracks as we Descended

The descent really is lovely as you follow a small fence that becomes a stone dyke, all the way back down. Eventually the snow cleared and I was enjoying an easy sunset walk on the little path through the heather. 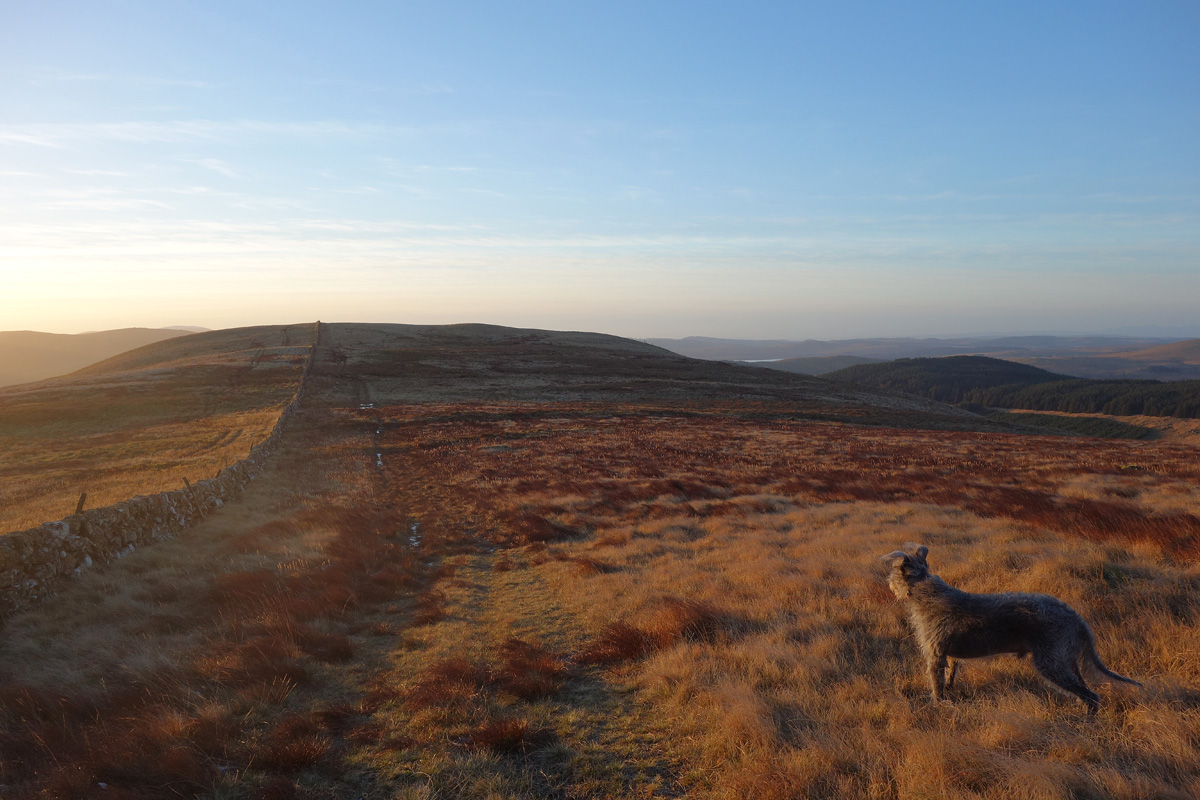 The Colours Were Beautiful 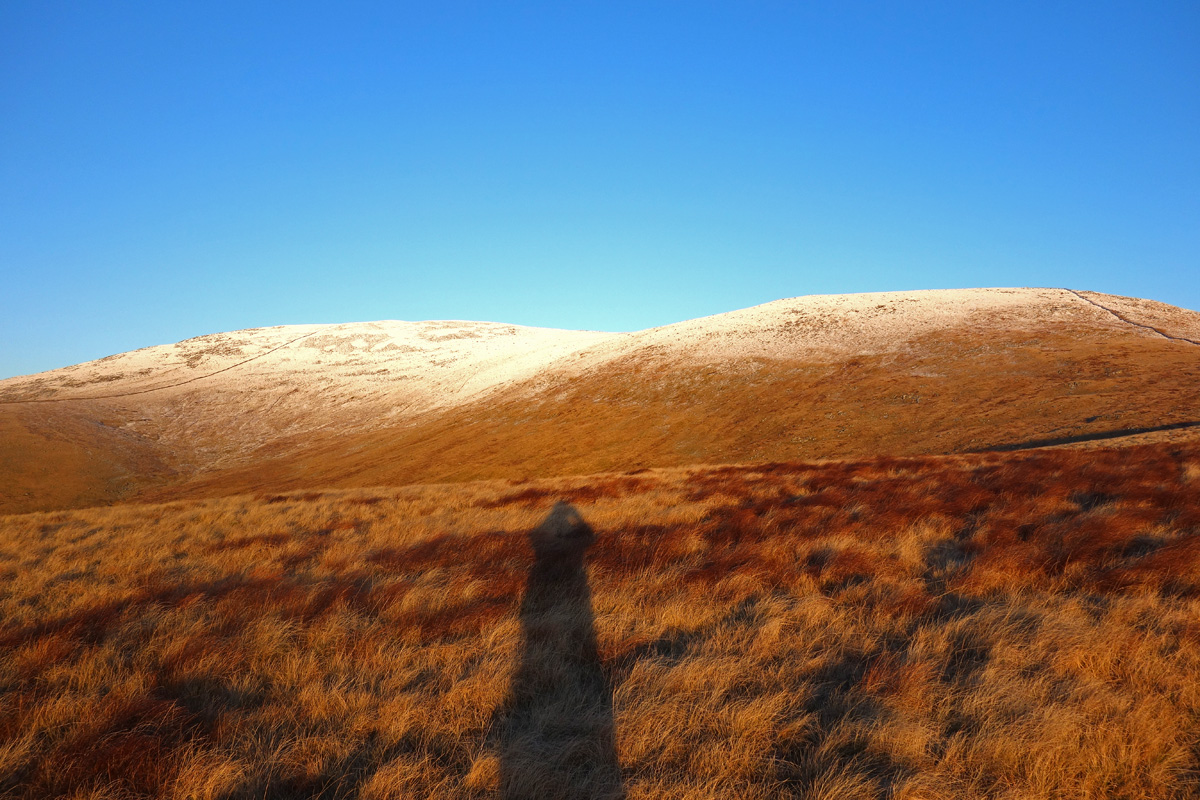 Eventually, the track drops quite steeply at Dunool and a little burn flowing west takes you back out to the original gravel track. The sun had set behind the hills and I was now very much alone: making for a very relaxing walk back to the car.

Cairnsmore of Carsphairn is one of those hills that isn’t going to be mentioned by many walkers. It’s not the biggest, the route isn’t the longest and even in Dumfries & Galloway it is overshadowed by neighbouring Corbett’s like Corserine and Merrick. Yet, I love it. It’s a great day out on the hills, with stunning views and a lovely feeling of remoteness.

If you’re in the area, don’t overlook it! 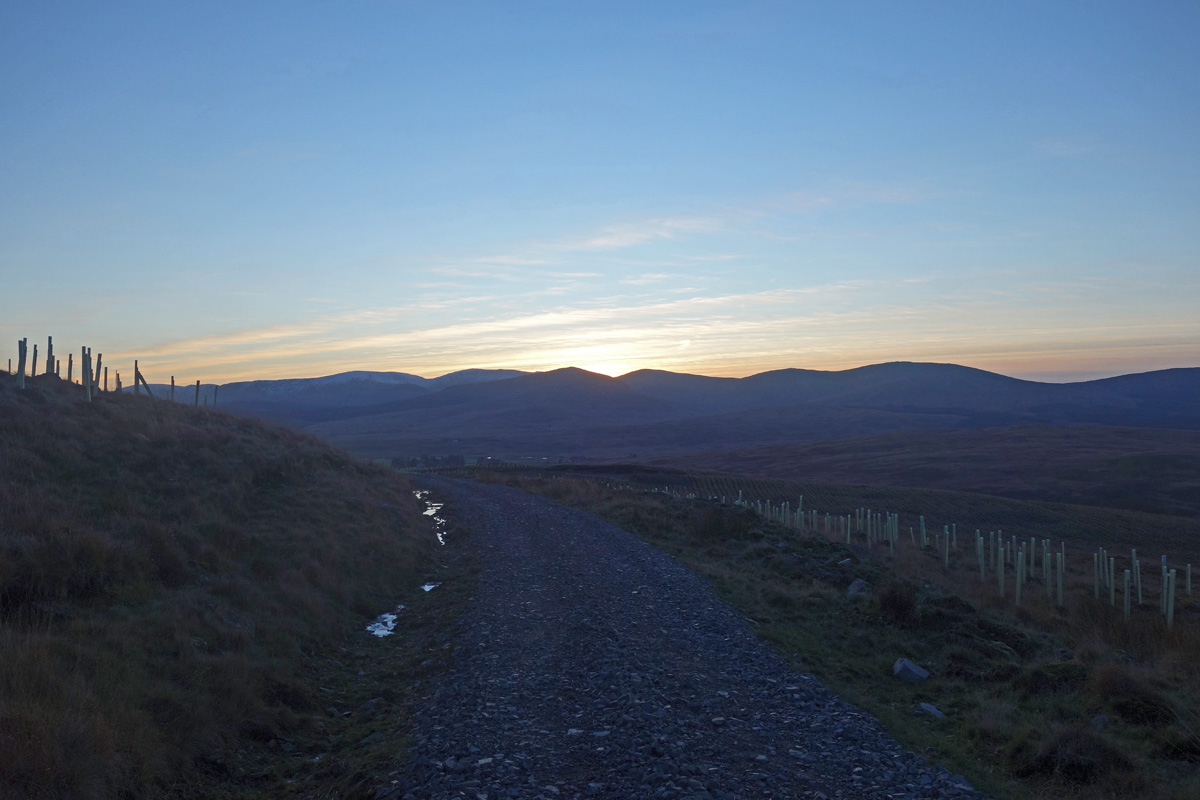