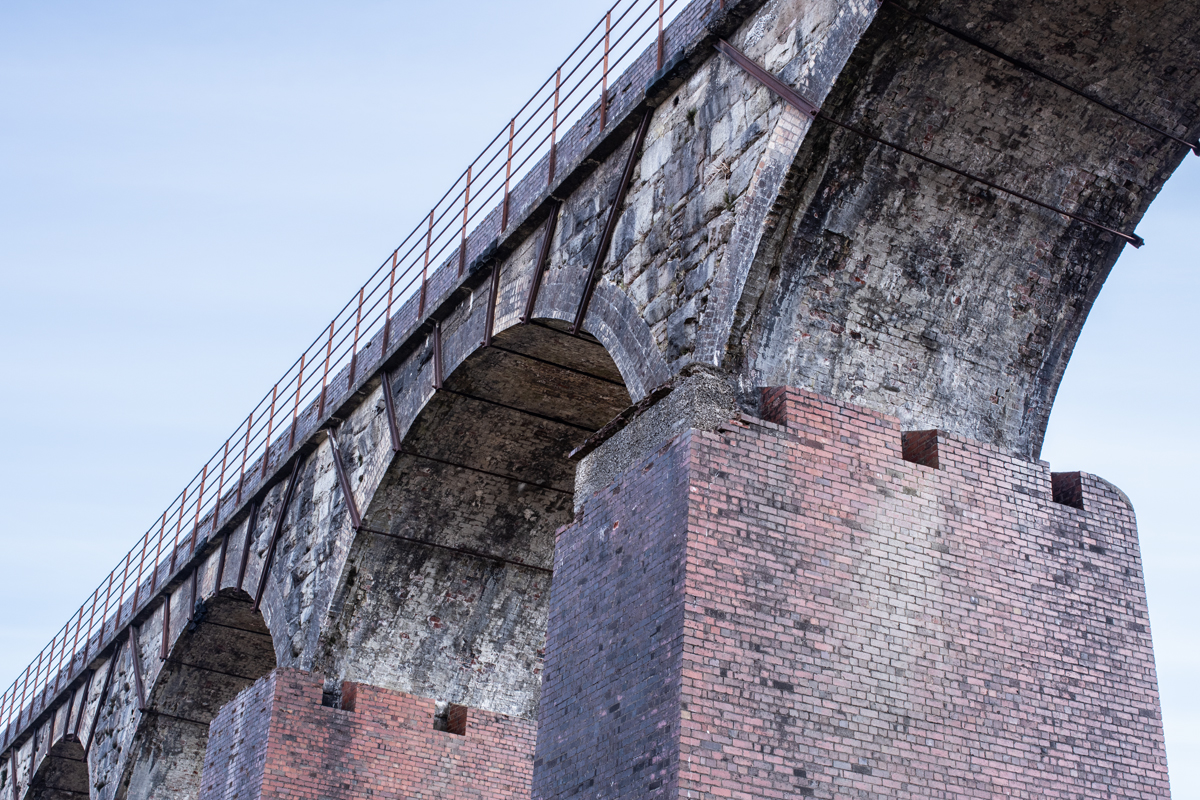 One of the walks I’ve always wanted to do for the blog is visiting the Big Water of Fleet Viaduct that sits in the hills above Creetown and south of Clatteringshaws Loch in Dumfries & Galloway. Part of the now defunct Portpatrick railway that ran through Dumfries & Galloway, the Big Water of Fleet Viaduct was built in 1861 and ferried visitors to the area until the outbreak of WWII when trains thundered across it carrying munitions from the piers at Stranraer.

At 900ft long, 70ft high and with 20 segmented arches it is an impressive and imposing structure. My favourite quote in regards to it comes from a reference on Canmore:

“This viaduct was a continual source of trouble. It underwent heavy repair as early as 1912, and each pier was encased in brickwork from 1927 onwards, this task being completed in 1945.”

With a glowing reference like that, who wouldn’t want to see it?

So on a bright spring day I stood at the start of the Forestry Commission track, just below Clatteringshaws Loch, and set off south for the viaduct. Be careful you choose the correct track! This route starts at the well sign-posted Cycle Route 7 ‘Off-road to Gatehouse of Fleet’ (just south of the River Dee), not the ‘Raiders Road’ track this is just over the little bridge before Clatteringshaws Loch (heading north-east).

I’d walked a bit of this track before on a relaxed Sunday walk to see Loch Grannoch and as I headed out, with Messi next to me, I was looking forward to seeing the loch on such a bright spring morning. The going was easy (and would remain so all day) on smooth Forestry Commission tracks and the gentle (but slightly chilly) spring breeze was making it all very pleasant: no scorching heat or midges to speak of. 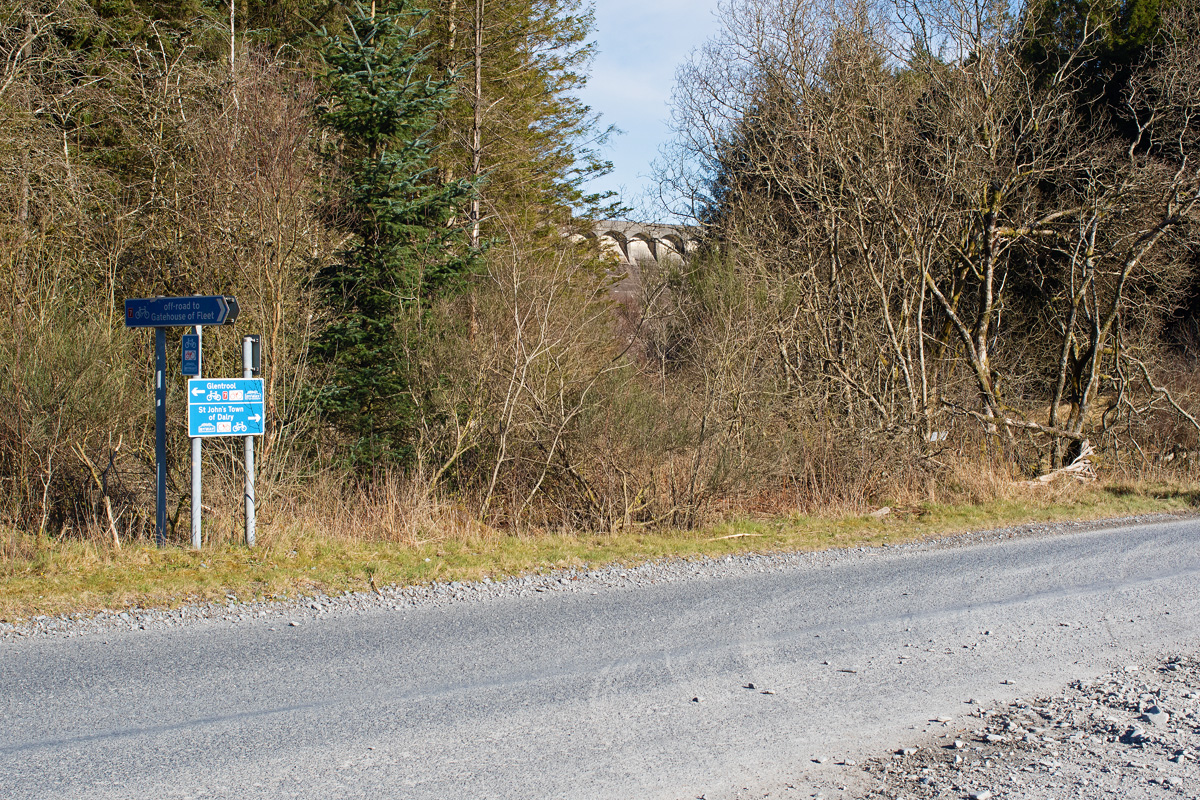 ‘Off-Road to Gatehouse of Fleet’ With Clatteringshaws Loch Behind 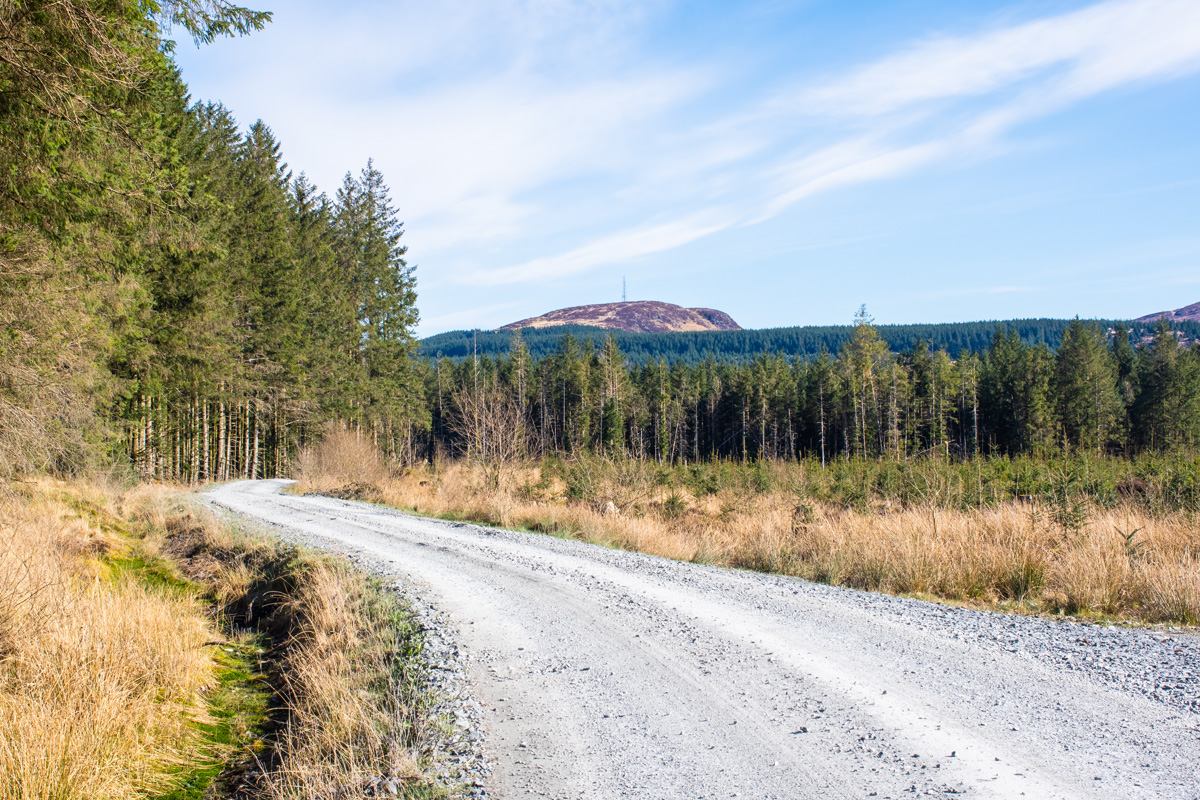 The first target is to reach the north end of Loch Grannoch which is easily done in 20/30 minutes from the start of the walk. We’d already had some excitement as a Forestry Commission logging truck had thundered by us and, for some reason, Messi had decided he rather fancied hunting Scania’s and had trotted off after it (I have no idea what he would have planned on doing if he had caught up to it) but  after a wee word from me, we were coming through the opening in the forest line and getting our first look at Loch Grannoch. 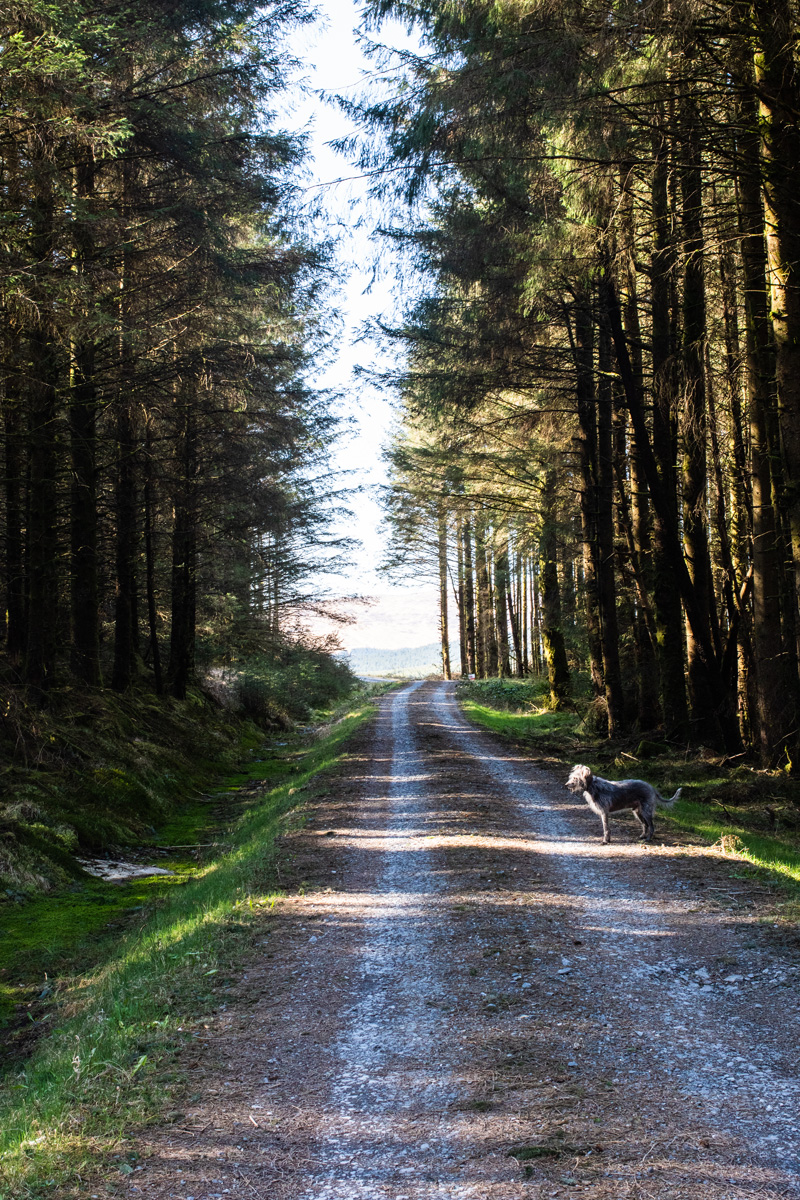 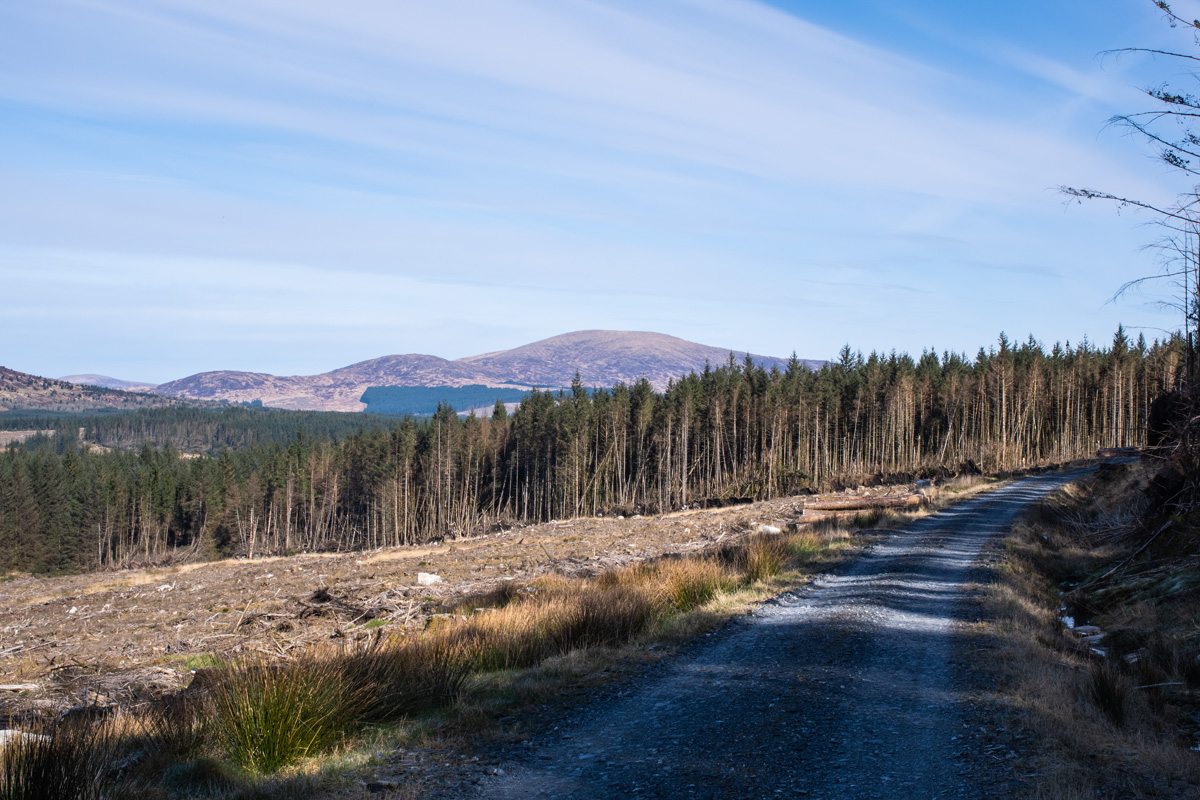 Looking Back to Meikle Millyea 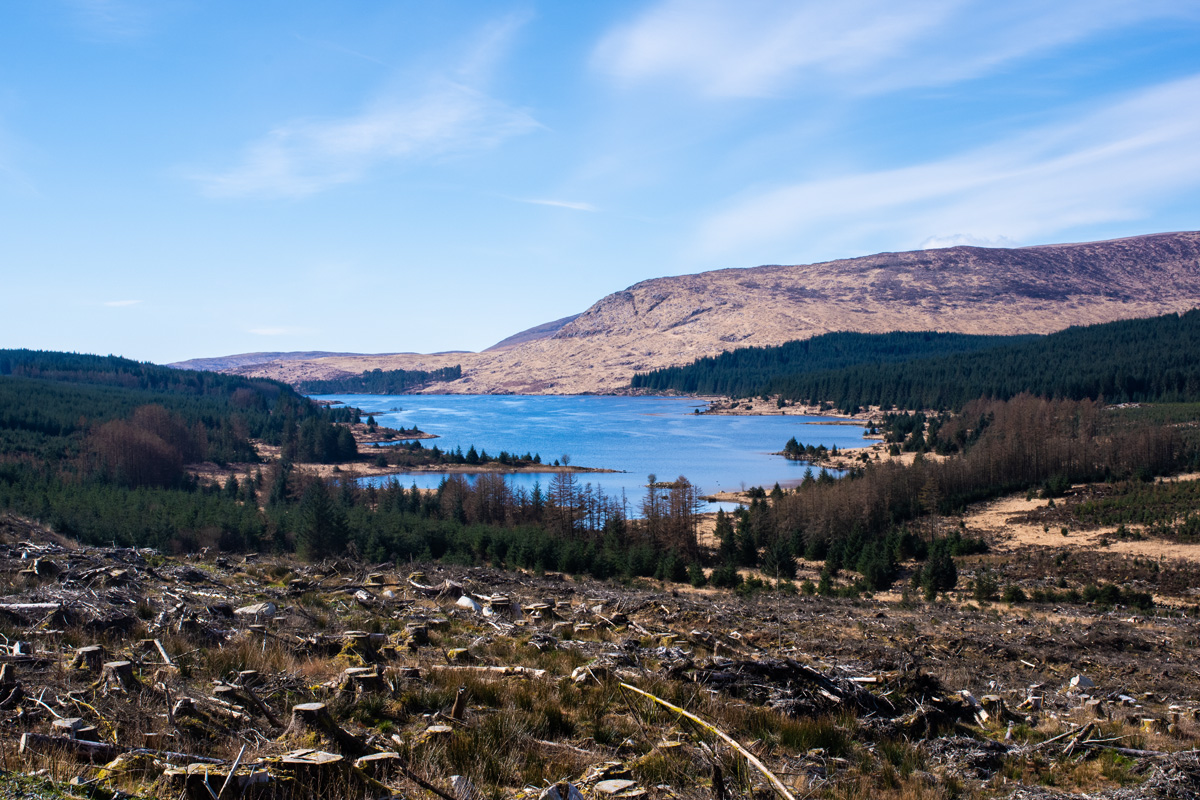 The views were wonderful on such a lovely day, with the surrounding hills covered in bright spring sunlight and Loch Grannoch a lovely shade of blue. I can’t stress enough how lovely this area is and how easy the walking is. From serious hikers to holidaymakers looking for a wee stroll in Dumfries & Galloway, the walk out to the start of Loch Grannoch is well worth your time. This track really is more a question of distance and how far you are willing to go rather than one of strain and ascent.

The track follows the east-side of the Loch and remains at a pretty steady gradient throughout. I was soaking up the atmosphere. Birds were singing, there was a gentle, cool breeze and there was barely a cloud in the sky. My walking buddy was enjoying himself too: not a single person in sight and as we headed further along the track we were well out of range of the logging trucks.

It was quiet, it was calm and it was isolated. 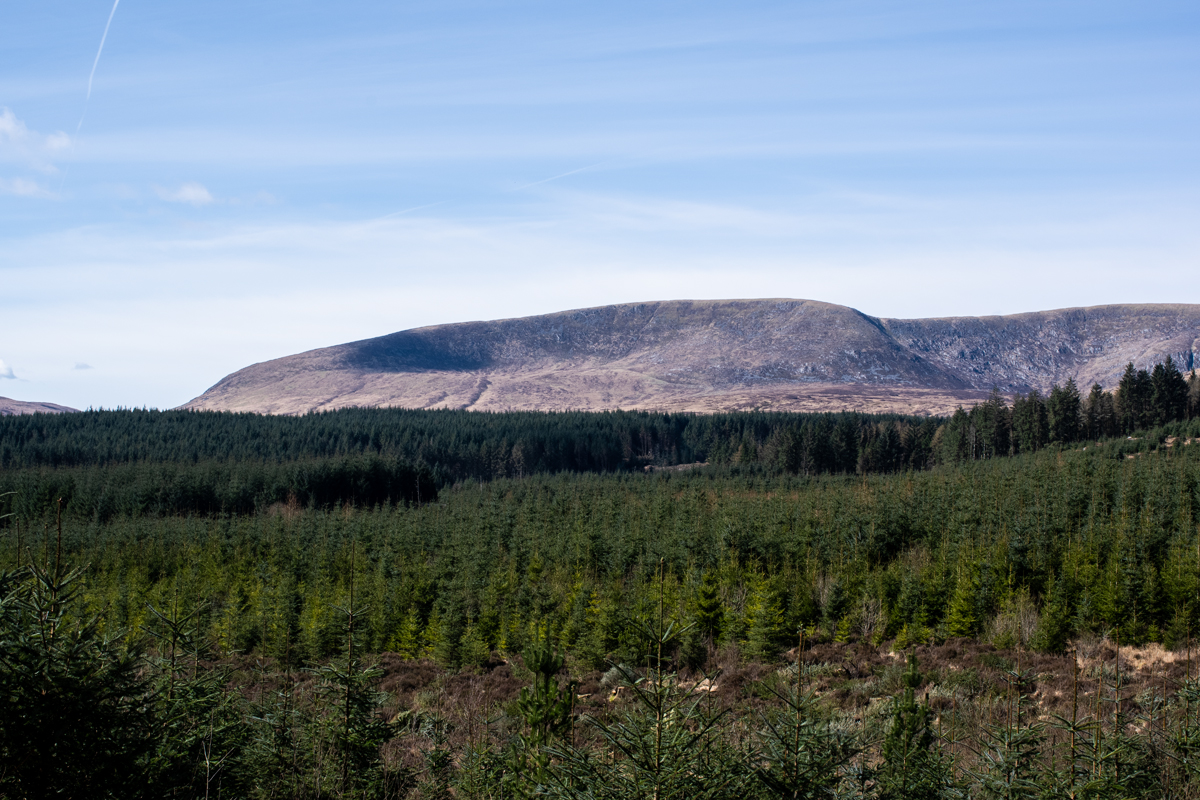 Looking to the Knee of Cairnsmore

The track started to descend a little as we entered deeper woodland. There were lovely views over to the Cairnsmore of Fleet range and as I checked my OS map, I could see we were starting to get very close to the target, even though there was no sign of it because of all the trees. 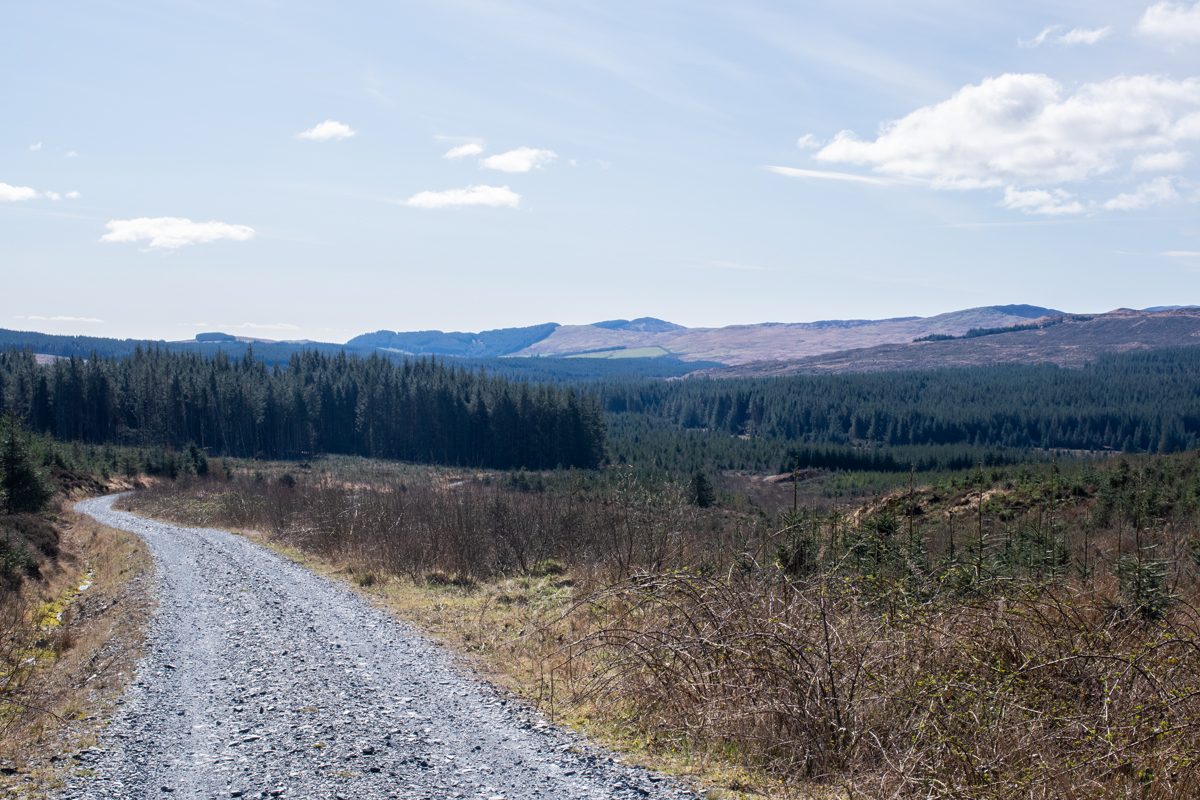 Descending Into the Forest

We were almost there!

I’d only seen images online. What would it be like? How big would it be in person? Would there be a good bench?

I ask the important questions. 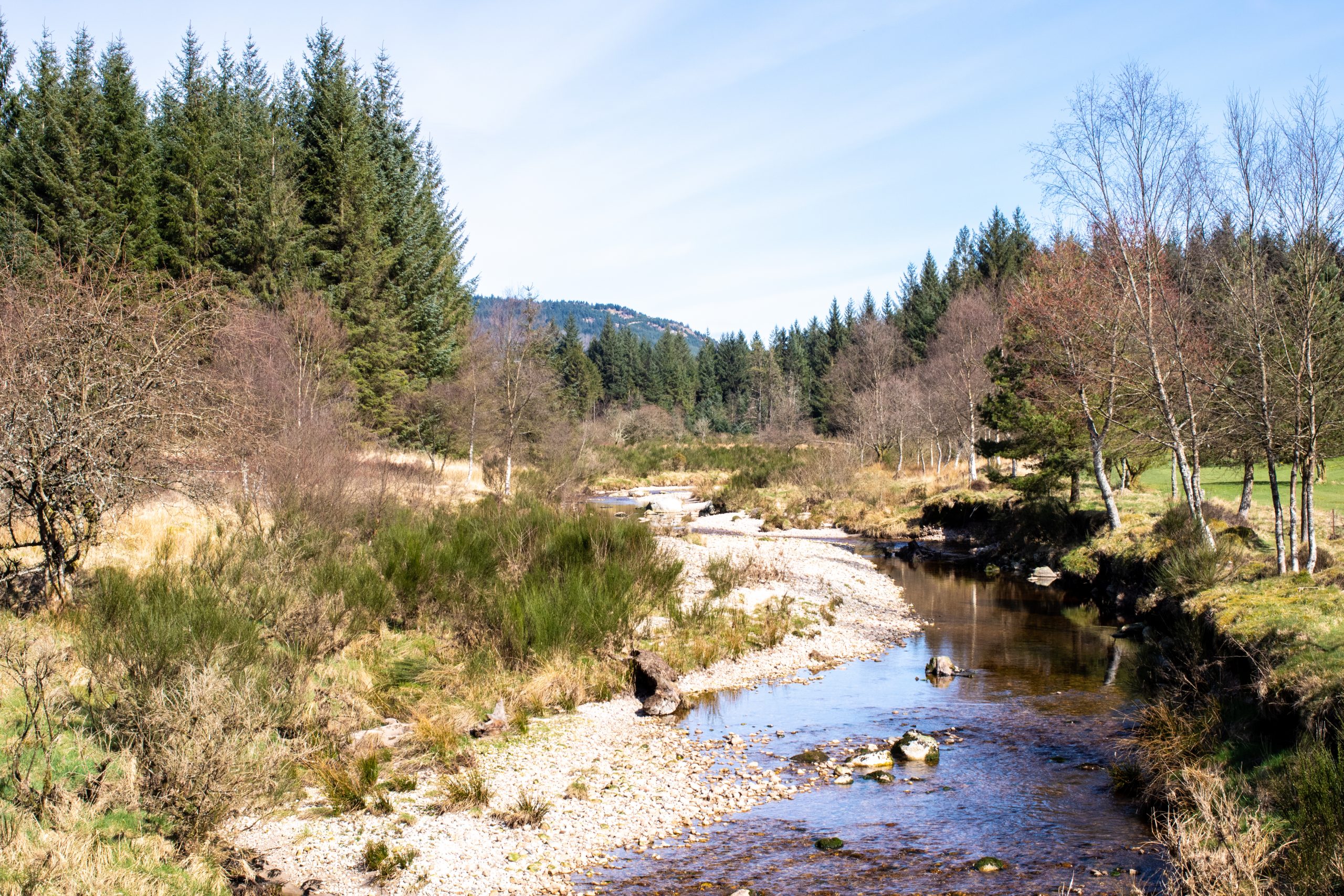 Passing Over the wonderfully named ‘Big Water of Fleet’ 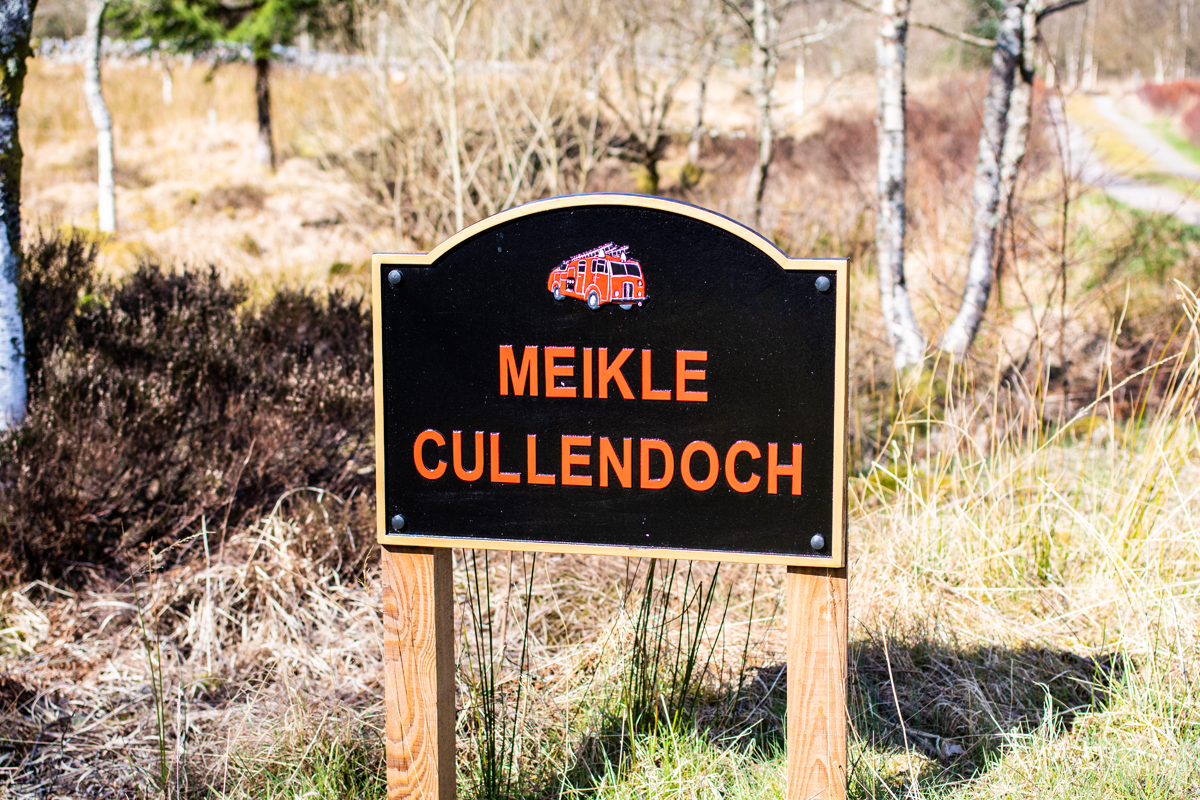 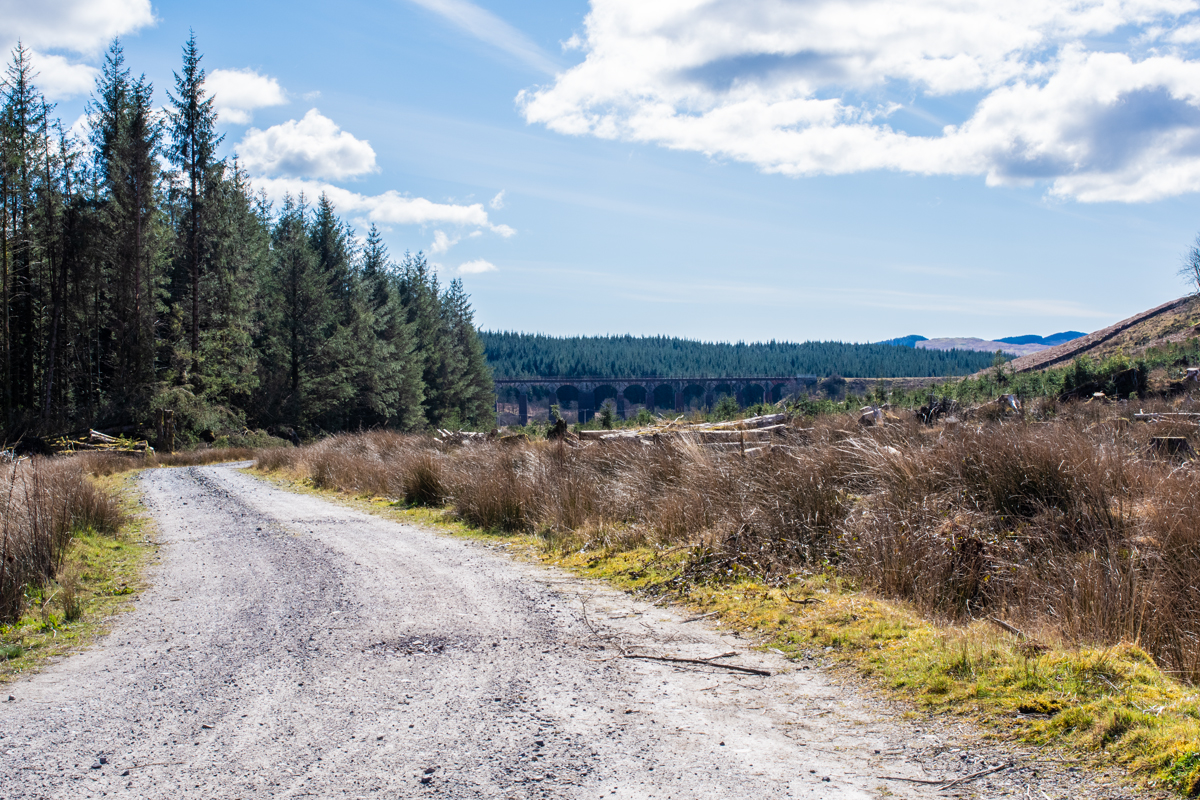 The First Look at the Viaduct

Then it came into view. A huge viaduct, surrounded by woodland. A lost piece of civilisation in a beautiful, sceneic area which looked simultaneously completely out of place while also seeming grandiose and very pretty.

I also got to see a brand new sign. One which I can honestly say I’ve never seen before. 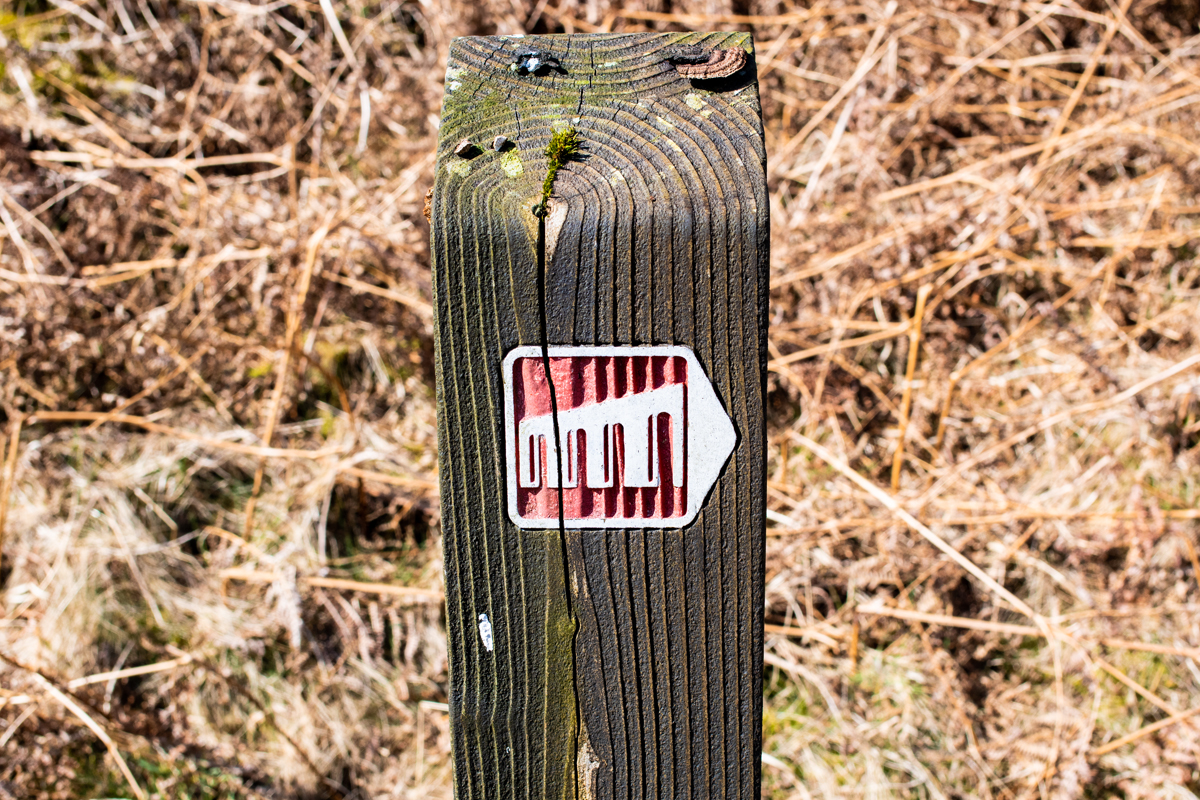 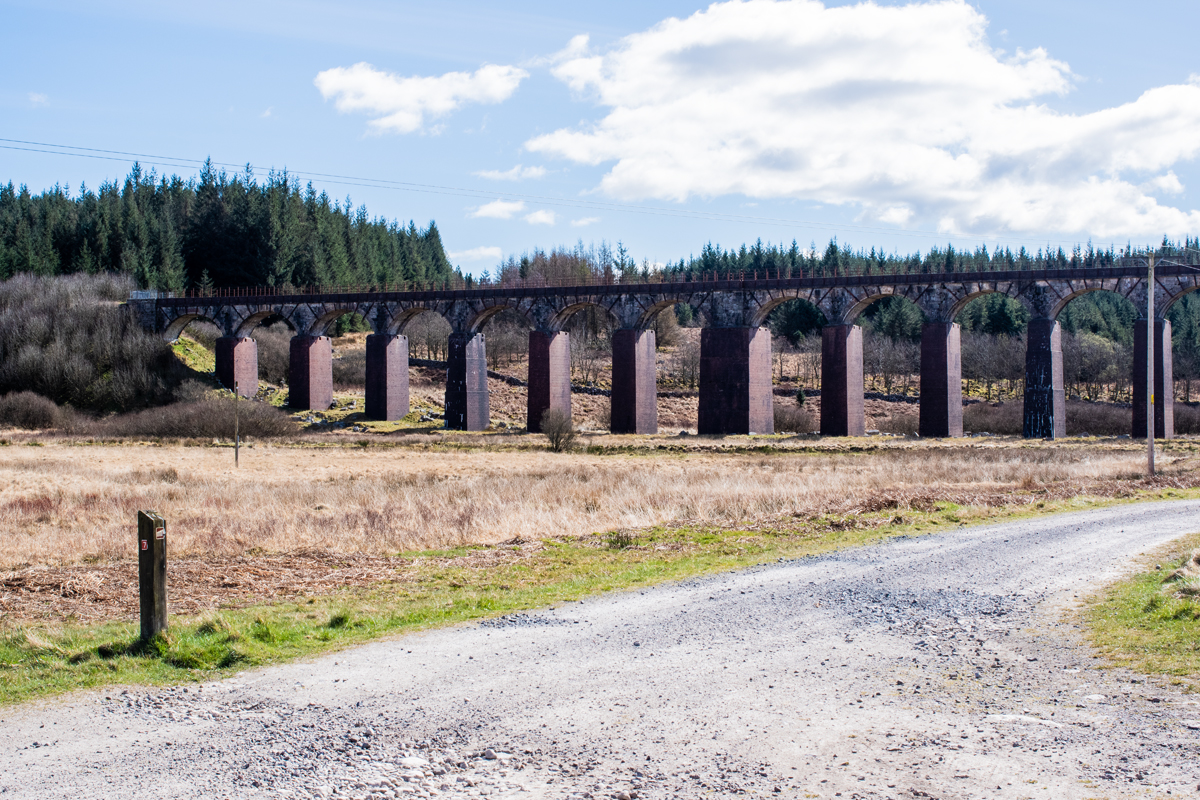 Arriving At The Viaduct

You don’t get a true sense of scale until you arrive at the viaduct. It’s huge. A long, sprawling concrete and brick monster with the river and a little road that pass under it.

The viaduct sits in the Cairsnmore of Fleet National Nature Reserve and can be accessed, by car, from Creetown. A mere 6 miles away (15 minute drive).

I’d expected to be impressed but what I hadn’t expected was how lovely the area was. The viaduct sits in the Cairsnmore of Fleet National Nature Reserve and can be accessed, by car, from Creetown. A mere 6 miles away (15 minute drive).

There is a small visitor centre, parking areas, picnic tables and benches. The viaduct even has an information board. You see, you don’t actually have to DO the hike I was doing if you are on holiday in the area and just want to see this wonderful bit of construction. You can simply drive. 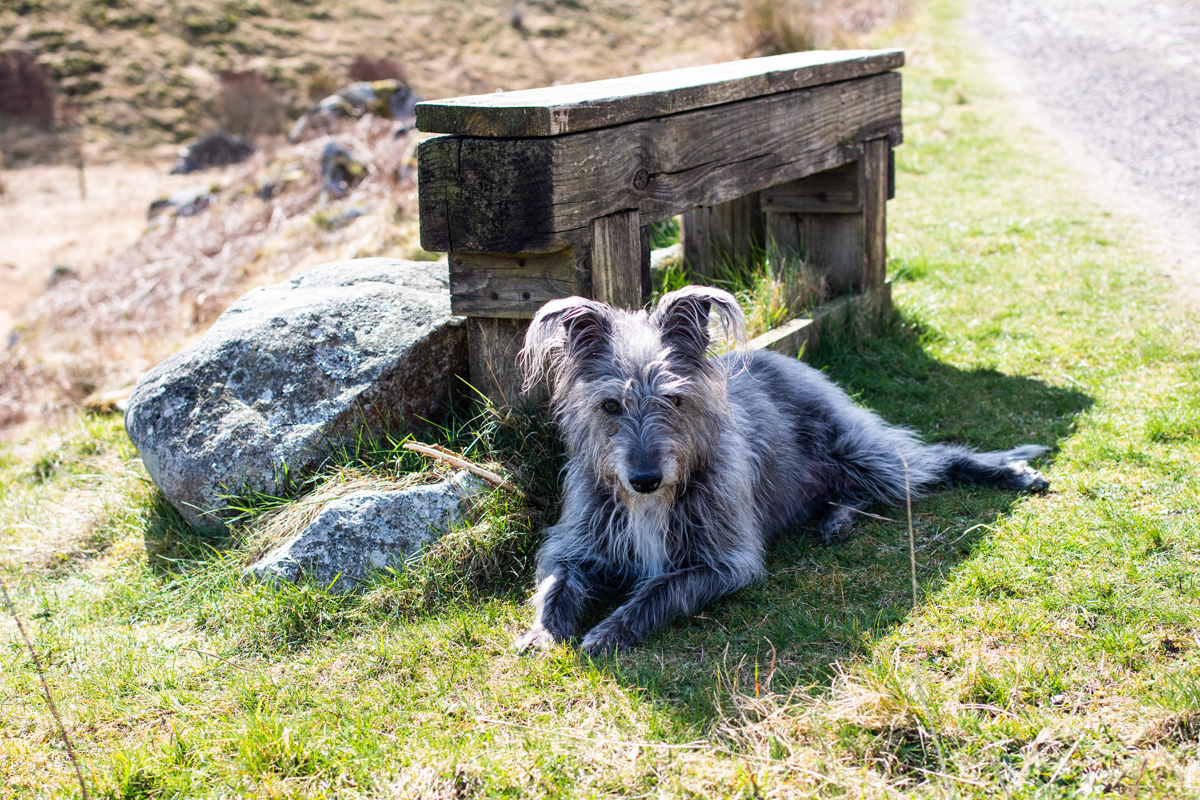 I was spoilt for choice for what to do at this point. I, of course, had some lunch with me and I knew Messi would be eager to get his share. However, he had to wait a bit longer as I couldn’t wait to climb to the top of the track that runs up the west side of the viaduct. I wanted to see the views! And be up high!

But the views were worth it.

Sweeping views over the moors to Cairnsmore of Fleet are the reward for those who take the small stroll to the top. A hill I have done before and which has a special place in my heart as I watched the sunset from the summit of it the year prior. 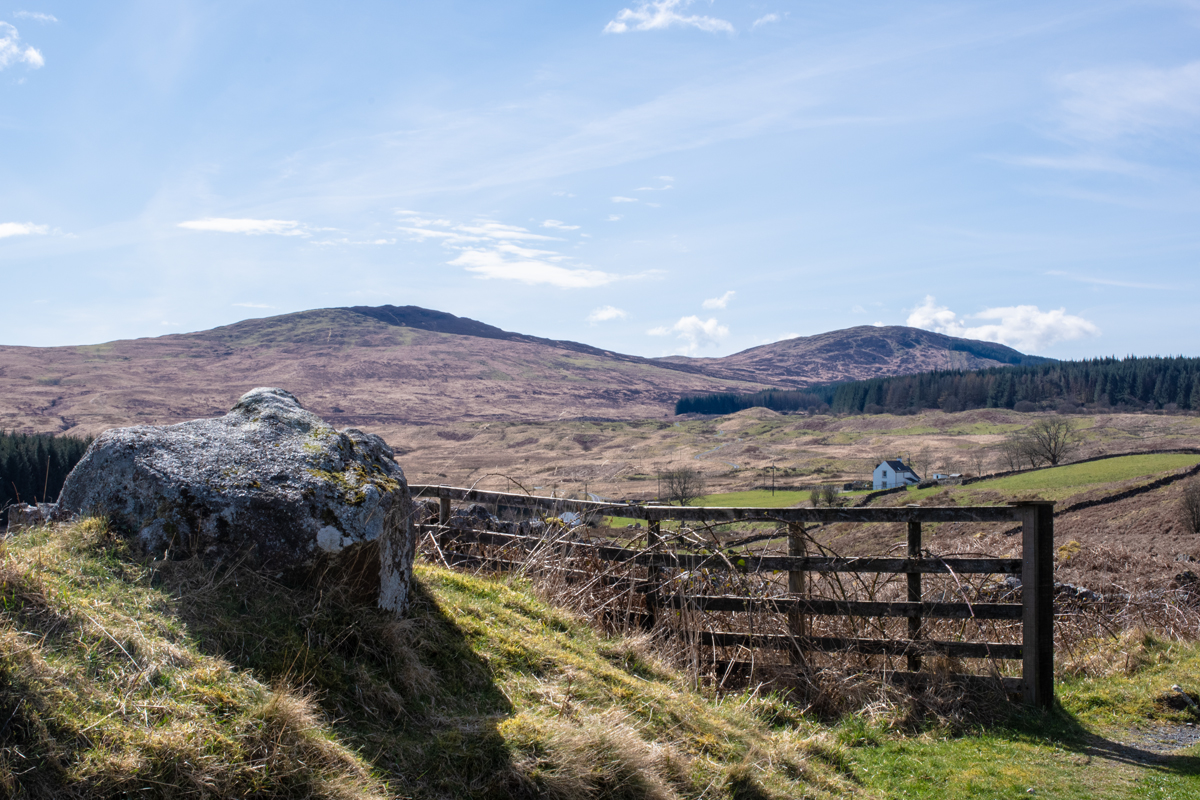 The Stunning Views to Cairnsmore of Fleet

A small track leads off from the top of the viaduct which is actually part of a small circular walker from the visitor centre, along the quiet road and to the viaduct. I was far more interested in actually stepping foot on the historic structure.

We ventured on top and had a wee stroll along it to the half-way point. Where Messi decided it was as good a place as any for a breather and collapsed in a wee shaded spot. I was taking pictures in all directions, looking at the river flowing under us far below and constantly turning to admire the views to Cairnsmore of Fleet. 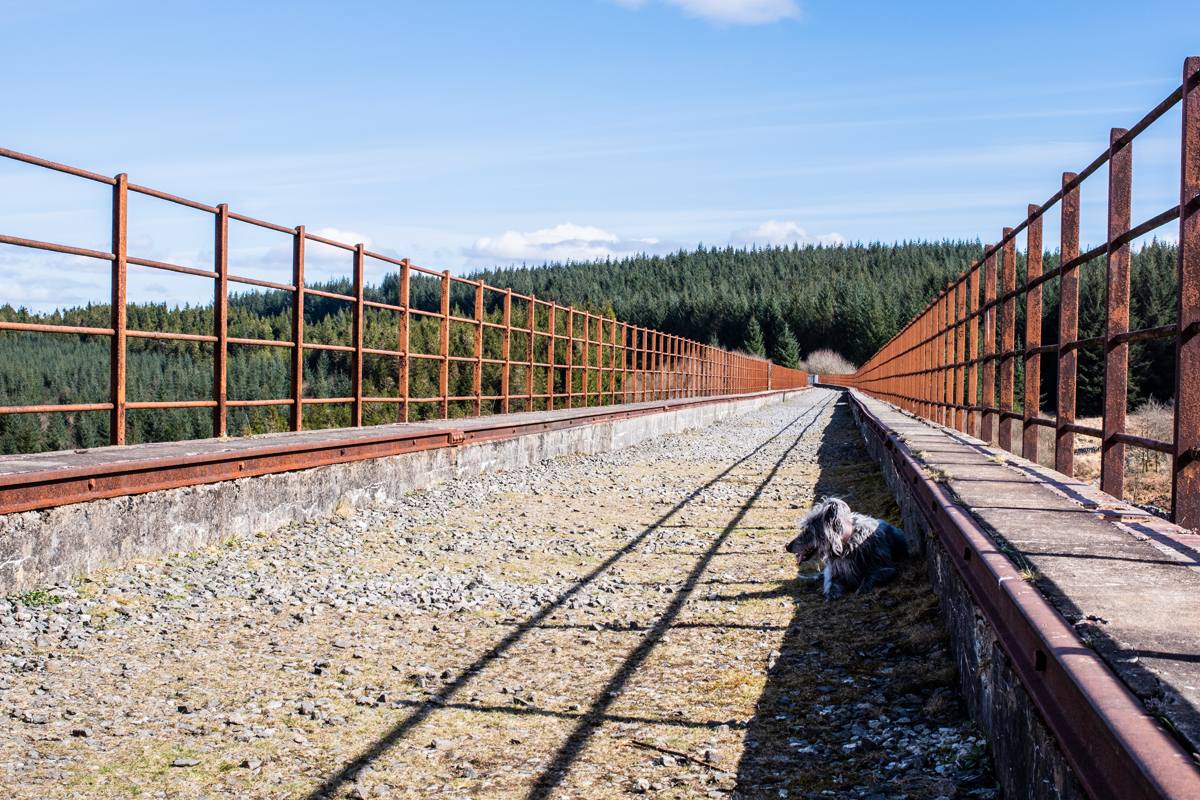 Sprawling 100+ Year-Old Viaduct or Good Place for a Seat? 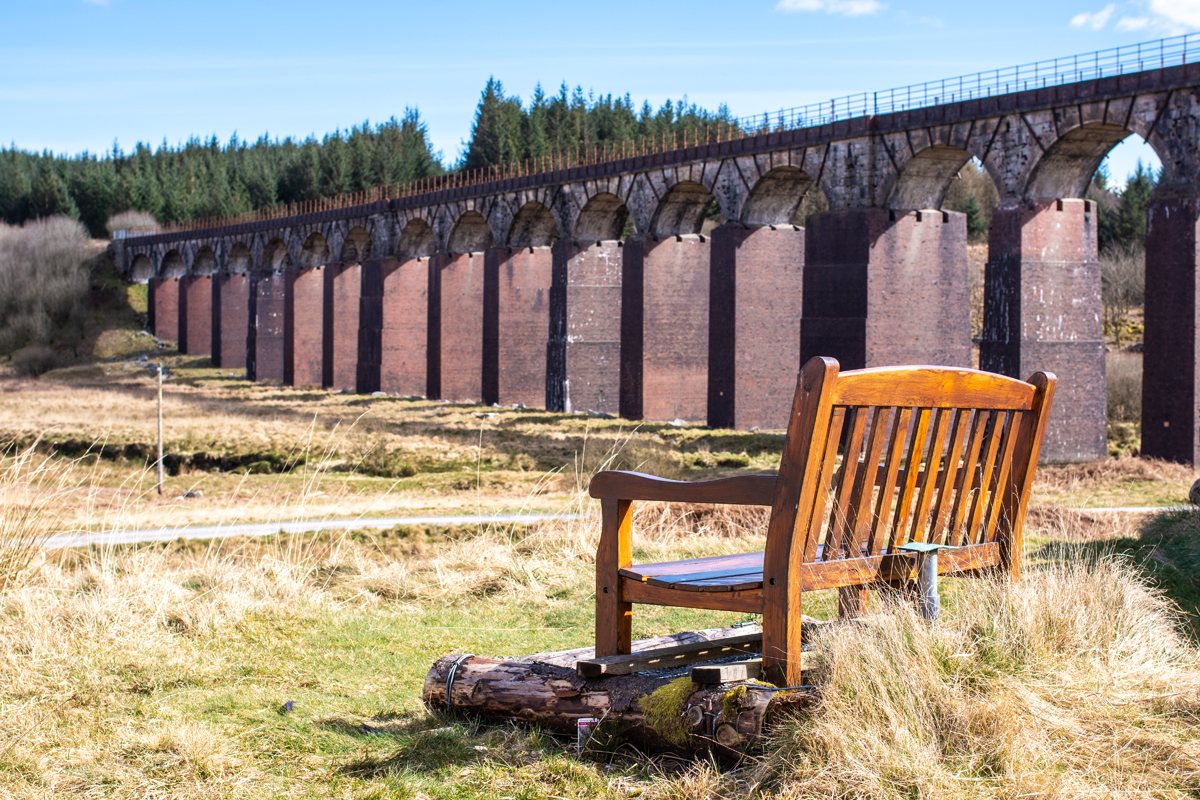 A Perfect Place for a Bench

Eventually we descended and I sought out a bench. One that sits alone caught my eye, on a little elevated mound just below the viaduct. We had lunch underneath it as cars arrived with visitors. Two friends got out of their car and were immediately enamoured with the viaduct and the information board.

Another car arrived, this time a young couple and their toddler, and they too stood with their necks craned upwards at the viaduct.

I can only imagine how many visit this remote area every year and marvel at this old, abandoned structure.

Looking up at the Amazing Architecture (Note the reinforced brick struts) 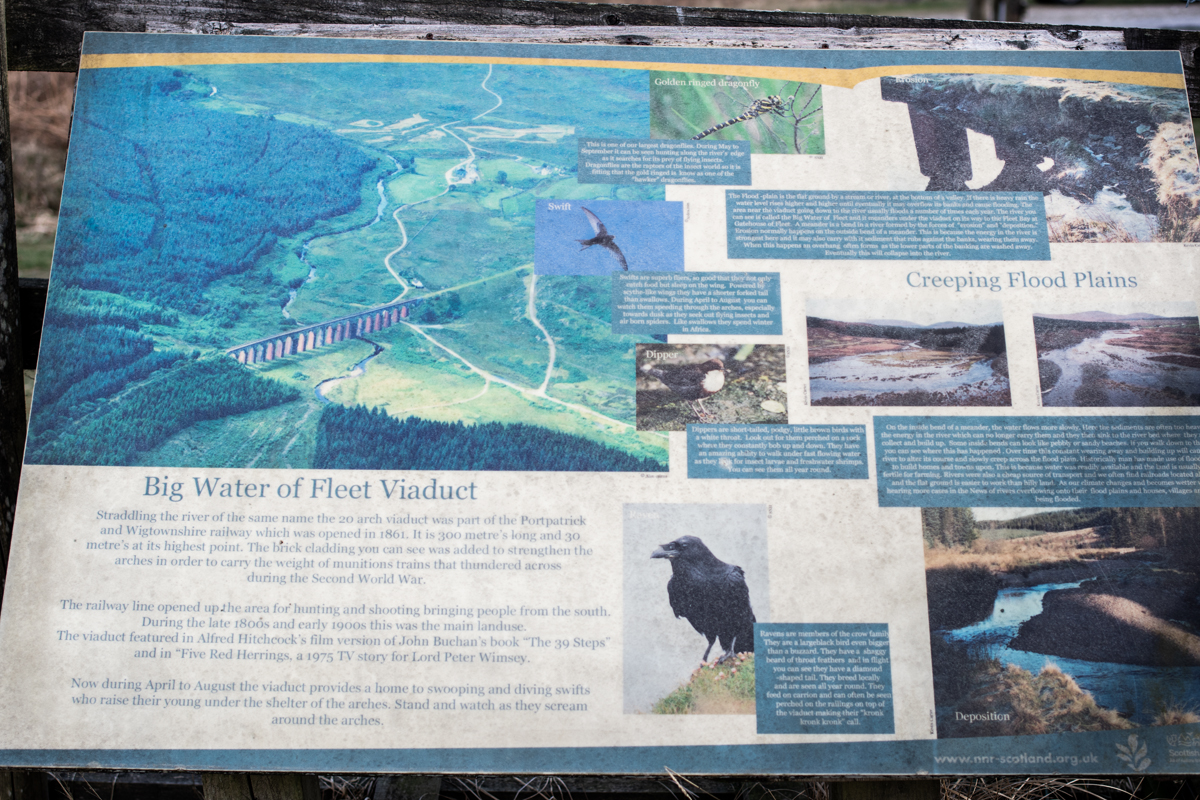 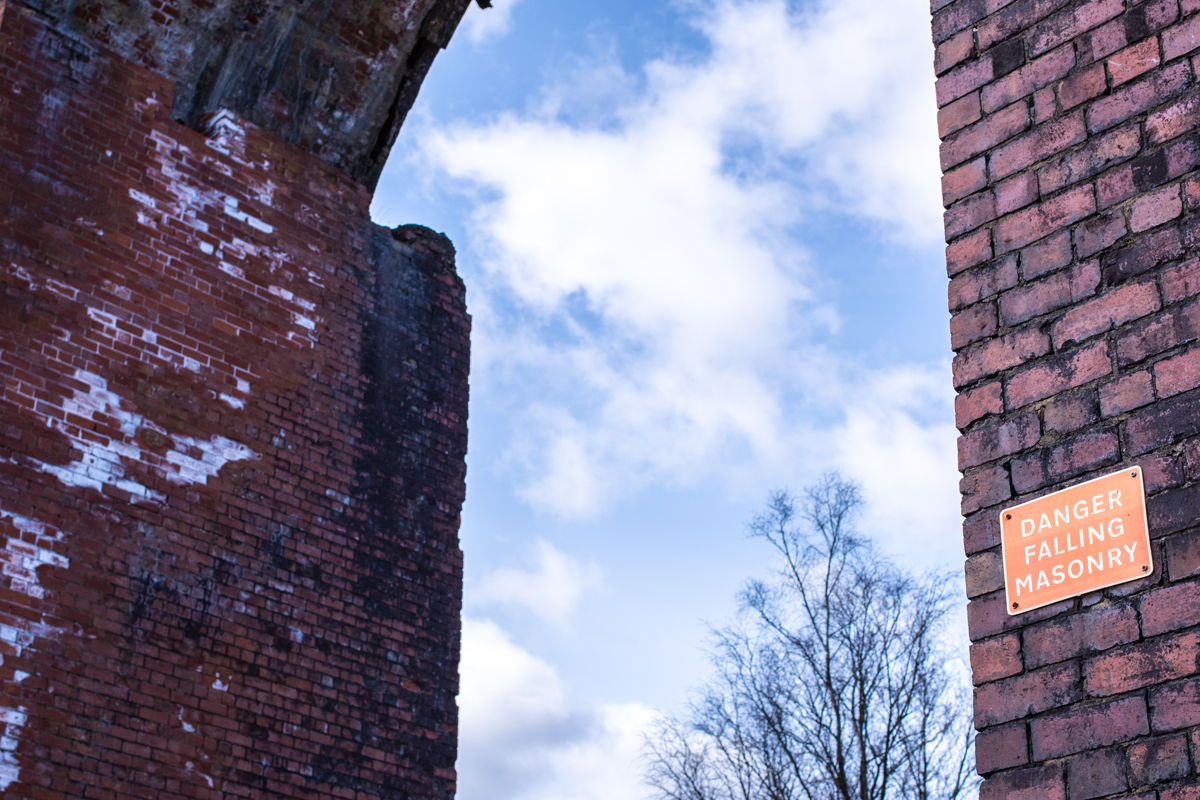 I’d spent about at hour at the viaduct. Taking pictures, eating lunch and soaking in the atmosphere but eventually I knew I had to head home. Which, for me, meant carrying on further south towards Creetown and I have decided not to go into too much detail about the end of the walk. It follows the little road and twists and turns south down to Creetown. It is quiet, it is pretty and there are many sheep in many fields. I’d strongly recommend it but it likely isn’t possible for most.

But it is the viaduct which is the true star of this story and I want to leave it that way. Whether you walk in from the north, via the track at Clatteringshaws Loch as I had done, or if you drive up from Creetown or maybe even if you drive/walk from Gatehouse of Fleet, you owe it to yourself to find your way to this remote piece of history in Dumfries & Galloway.

It’s completely free but the memories should last forever. 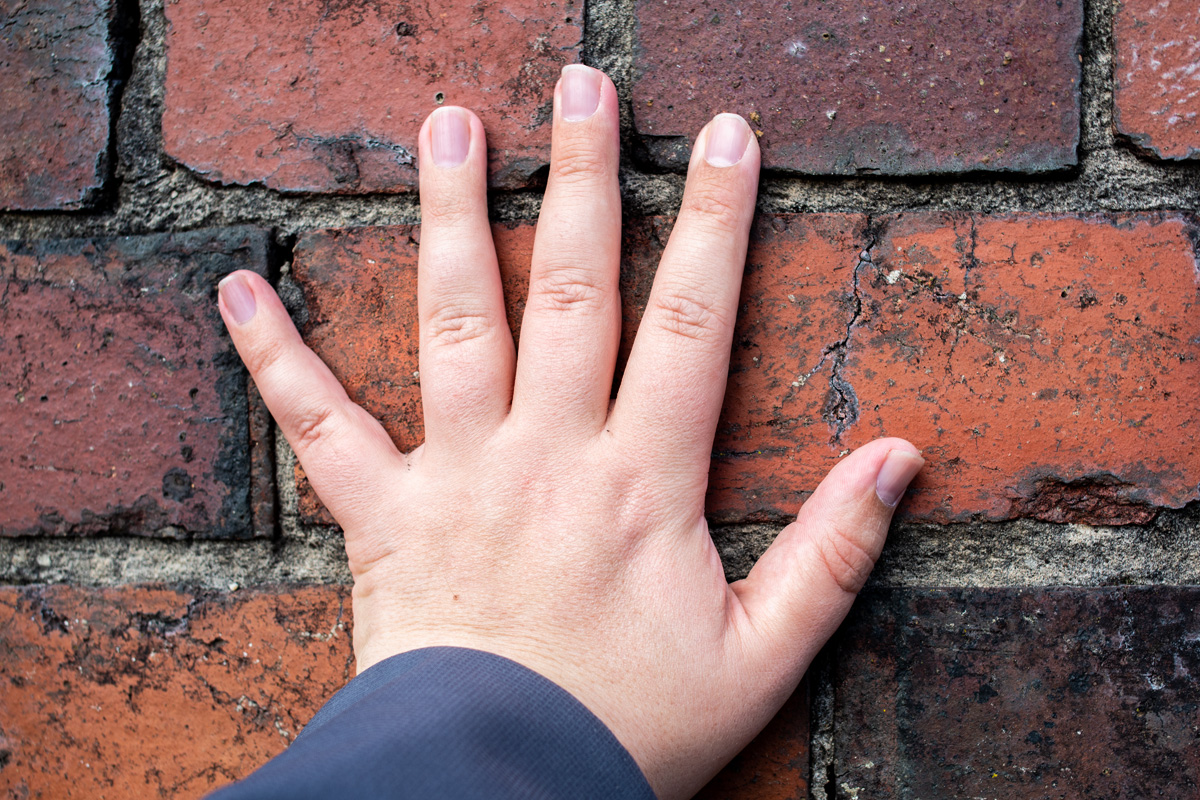 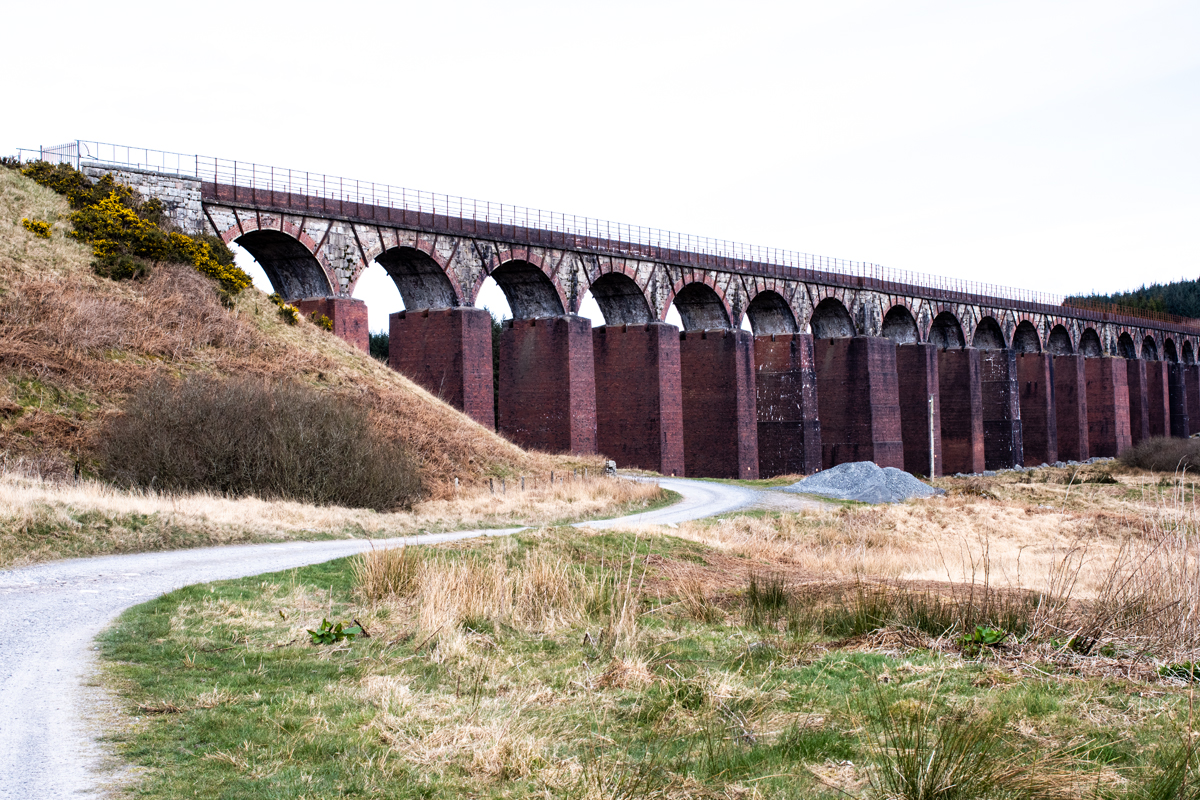 Looking Back to the Viaduct 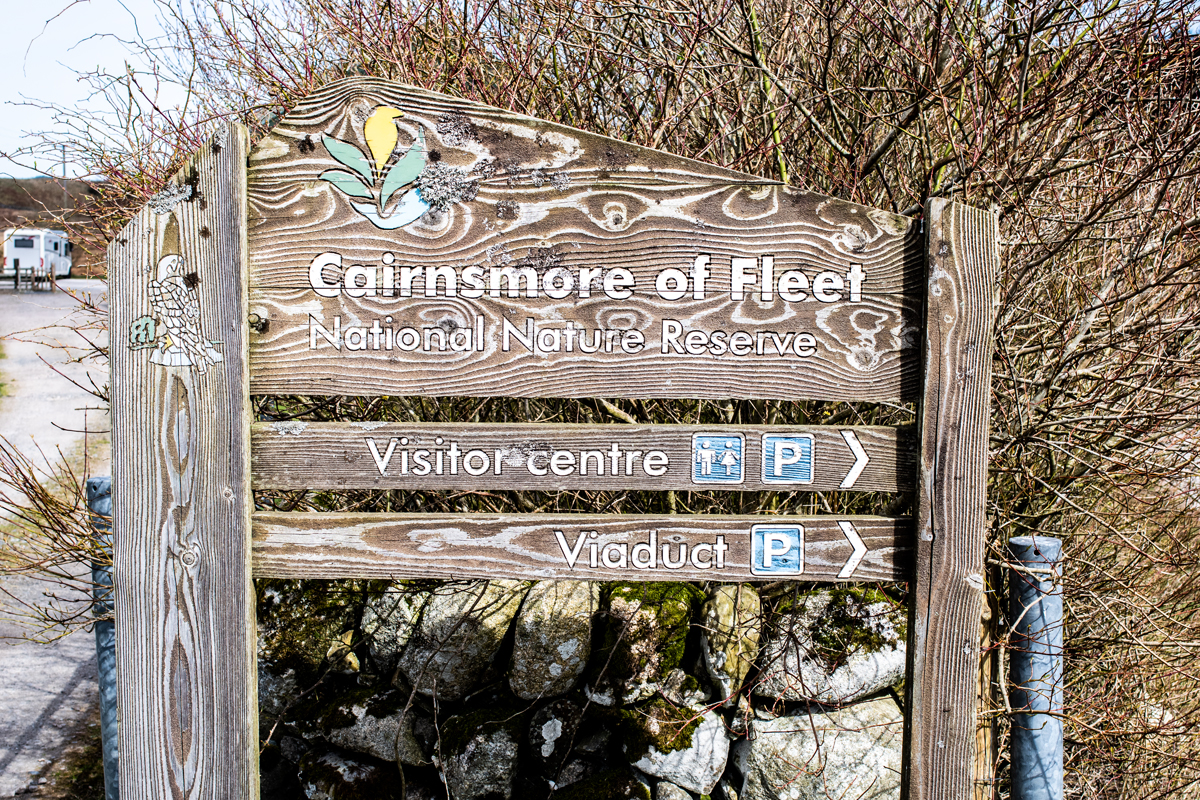 The Sign at the Cairnsmore of Fleet Nature Reserve 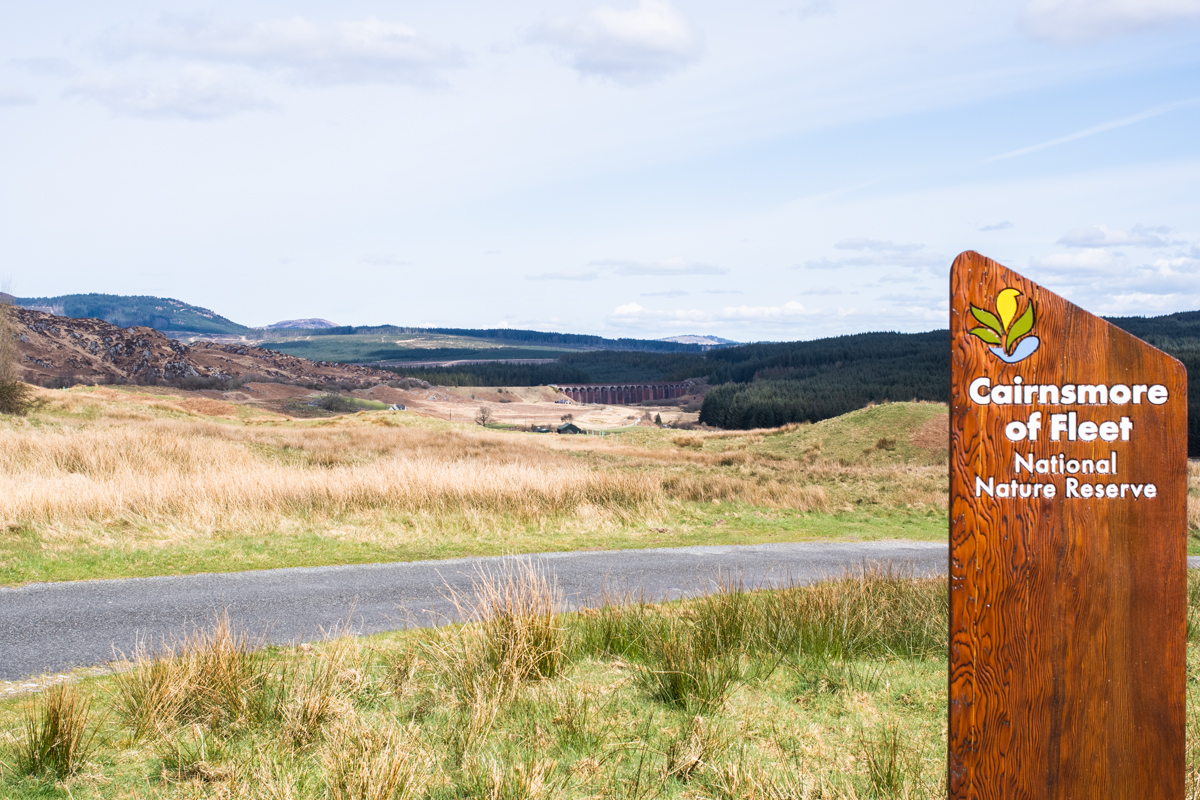 Route Length: Varies! I walked from Clatteringshaws Loch to the small village of Carsluith, via Creetown, which was a distance of 17 miles.

Driving/walking to the visitor centre from Creetown is 6 miles and should take you about 15 minutes (by car).

Walking from Clatteringshaws Loch, to the viaduct and back should be about 16 miles.

Driving/walking from Gatehouse should be about 7 miles.

Parking at the Viaduct: FREE