The walk to St. Ninian’s cave is without doubt, one of the best walks I have ever done. The sunshine was blistering, the views were spectacular and the ultimate goal of the cave on a beautiful, secluded beach was a fascinating reward for my efforts.

What makes this walk so special is the destination: St. Ninian’s Cave. St. Ninian is the earliest known Christian missionary to Scotland (whose name is known). He built a church at Whithorn, where he was bishop, and later died in 431. He is credited with converting the southern Picts to Christianity, of having at least 10 miracles attributed to him and is clearly an important figure in the early history of Scotland. Even the infamous King Robert the Bruce is said to have went to St. Ninian’s tomb at Whithorn to pray for a cure for his leprosy. To this day there are schools named after him in Scotland and the 16th of September is ‘St Ninian’s Day’. Christians still pilgrimage to his tomb in Whithorn and to his cave: a place where it is said he would pray in seclusion.

Walk Distance: Approximately 11 miles. (5 1/2 miles to the cave and the same return route) 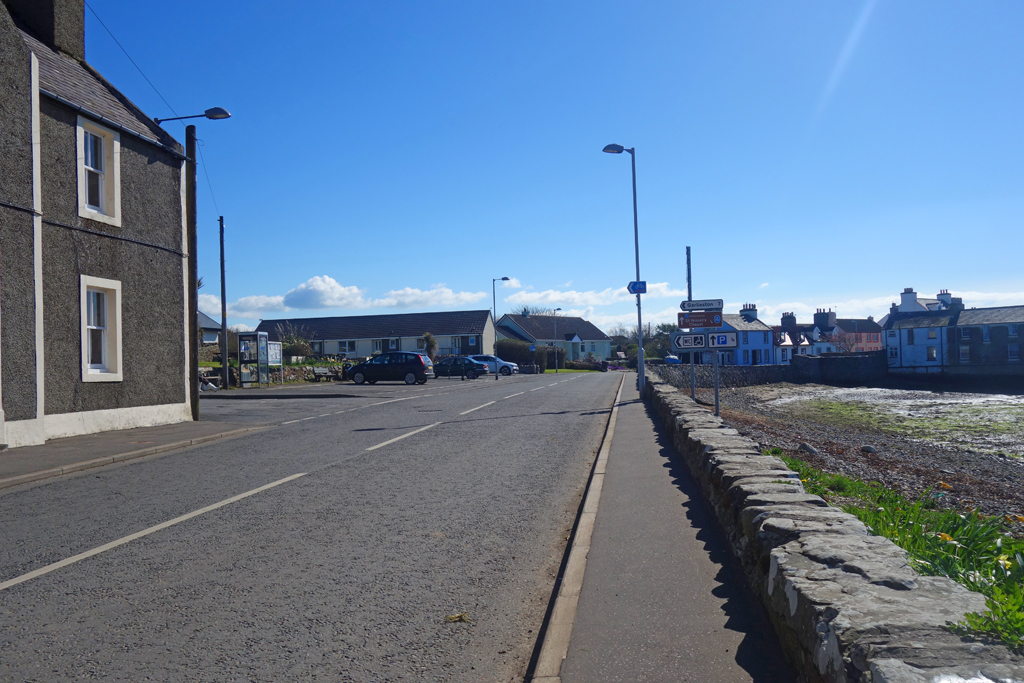 The Car Park at the Isle of Whithorn

Heading For The Cave

I headed for the Isle of Whithorn on what was a beautiful, blue morning. I’d read quite a few walk reports on various websites about reaching St. Ninians Cave. You see, the walk can be done via different routes. The easiest being a 2 mile walk from a farm, or a slightly longer 4 mile walk from a nearby caravan site but neither of these routes appealed. Checking my OS maps had revealed the possibility of following the wonderful ‘Coastal Paths‘ provided by Dumfries & Galloway Council that stretch for miles along the coastline of the region. I had previously walked on one of these paths for my walk to Cruggleton Castle. I had found one of these paths starting in the picturesque Isle of Whithorn that follows the coastline for just over 5 miles until it reaches St Ninian’s Cave. It was perfect.

It seemed appropriate to do the walk this way. After all, St Ninian had a chapel in the village and perhaps he had walked this route himself to get to the cave. I must give the local council credit as the coastal path is well signposted: the sign is just a few hundred yards behind me from the picture above. 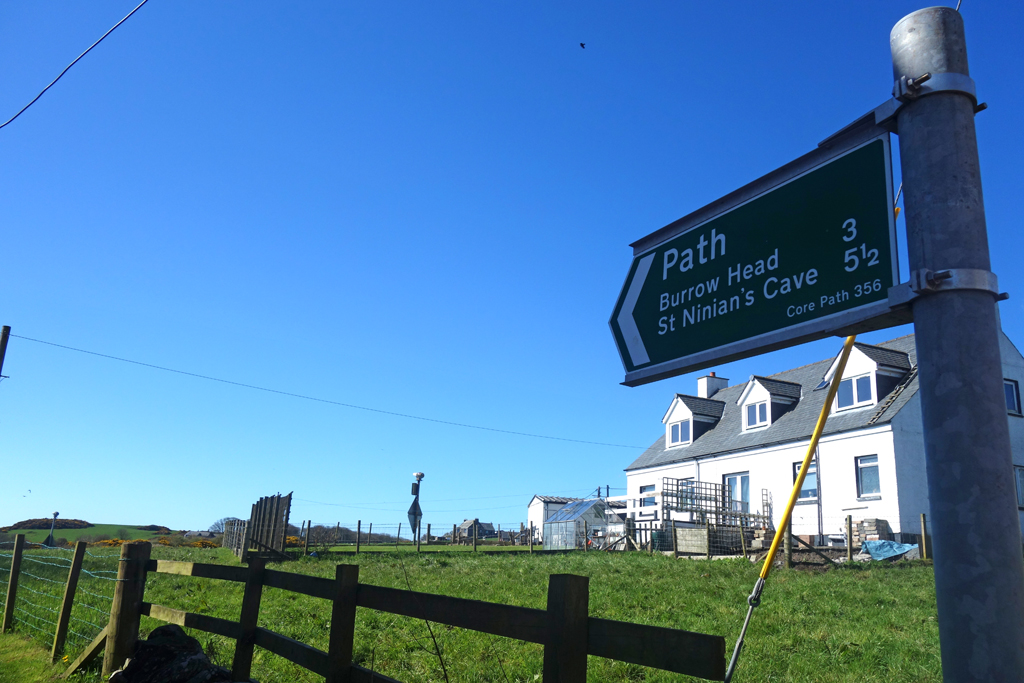 The walk immediately lead me into the fields and, in the first, were some young cows. They were no bother except for their usual curiosity about the dog. They were easily bypassed and I was immediately being distracted by the views. I’d been walking for 10 minutes and the bay at the Isle of Whithorn was gorgeous. 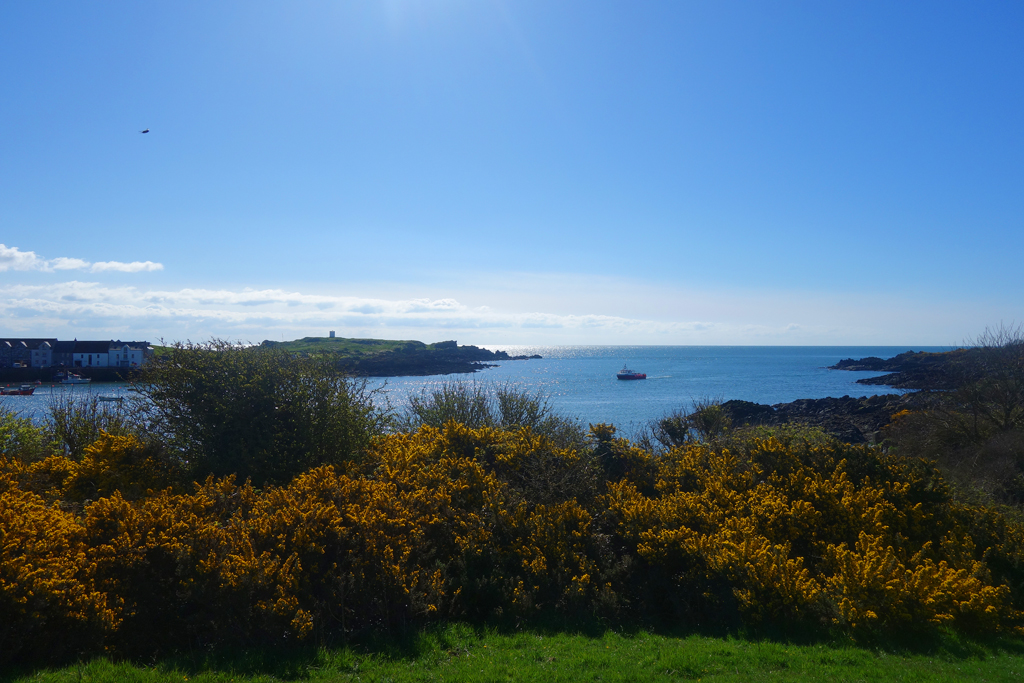 A Boat Approaching the Harbour 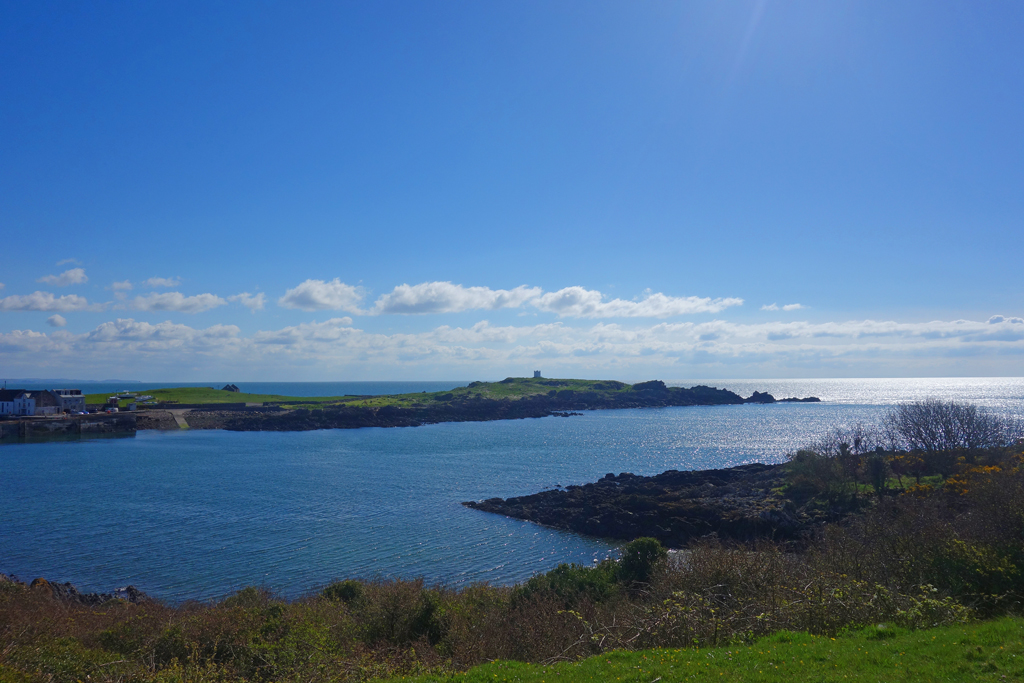 By this point I hadn’t walked a mile and I’d already taken a few dozen pictures. The weather was turning even warmer and it was starting to feel tropical. Things would only get better the further I walked. Messi was off the lead and running free too: he was having a fantastic time. 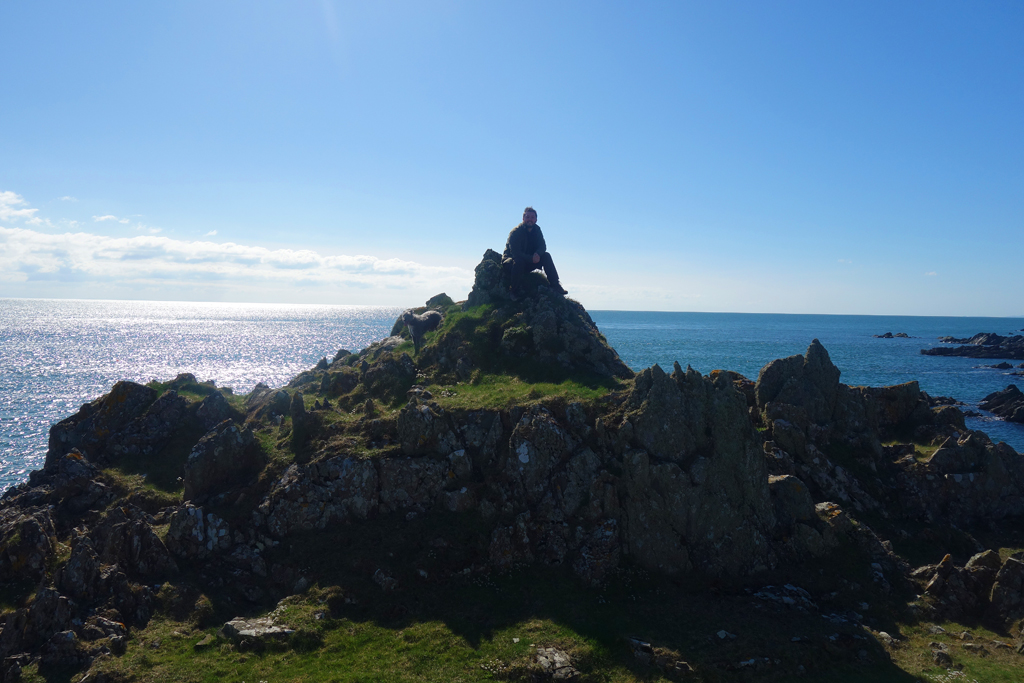 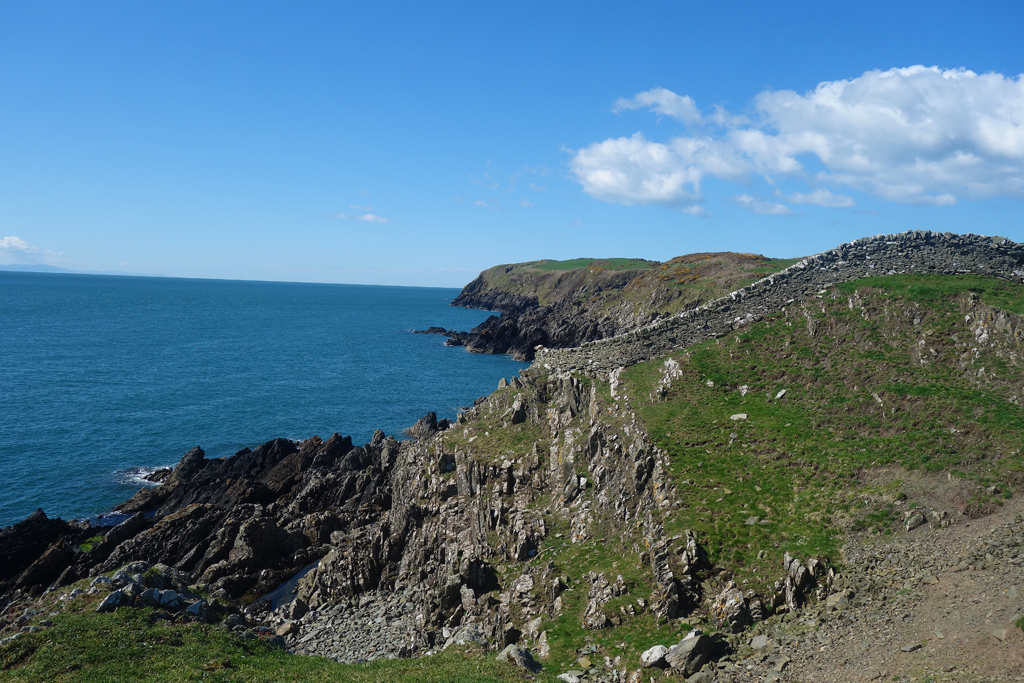 The Route Ahead: A Sprawling Coastline

As we walked, the coastline just got more and more dramatic. The cliffs got higher, the views opened up more and the walk just kept getting better. At various points, little inlets had pools of beautiful turquoise water in them. The contrast in colour was incredible. 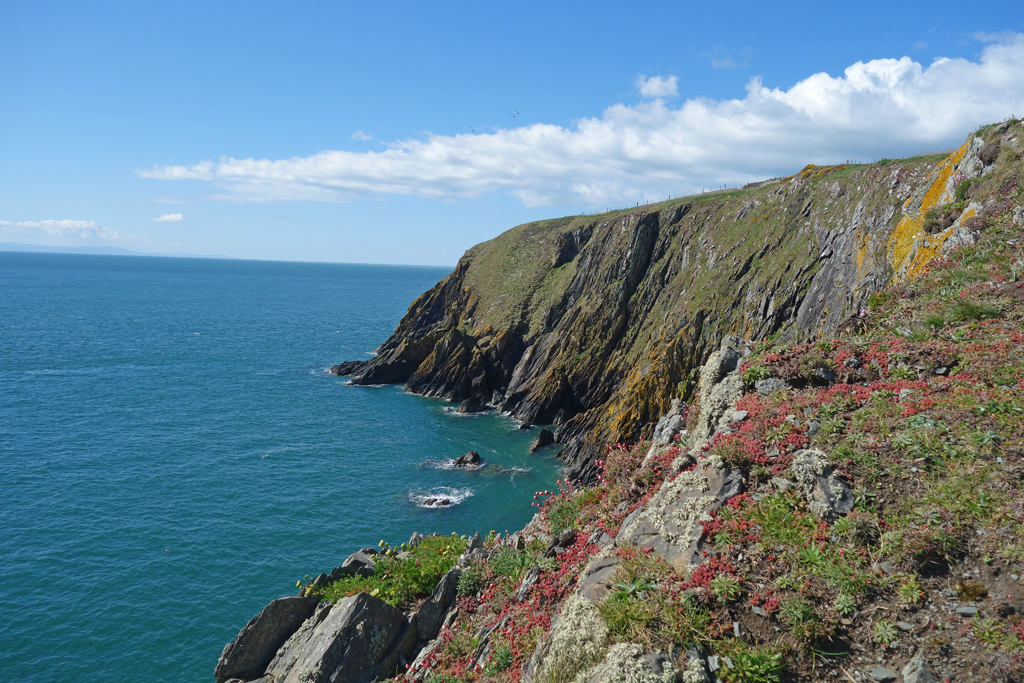 Before I left I’d faced the decision so many of us face before a walk. What to wear? It was blue that morning and quite mild. Should I put some layers on just in case? Should I just wear a light fleece perhaps? It IS Scotland after all and it was the end of April….I decided to wrap up a bit and wear a couple of fleece’s. You can never be too sure, you know?

Huge error. By this point everywhere was bathed in sunshine and I was somewhat overdressed for the occasion.

In my defence…it IS Scotland and who was expecting this? 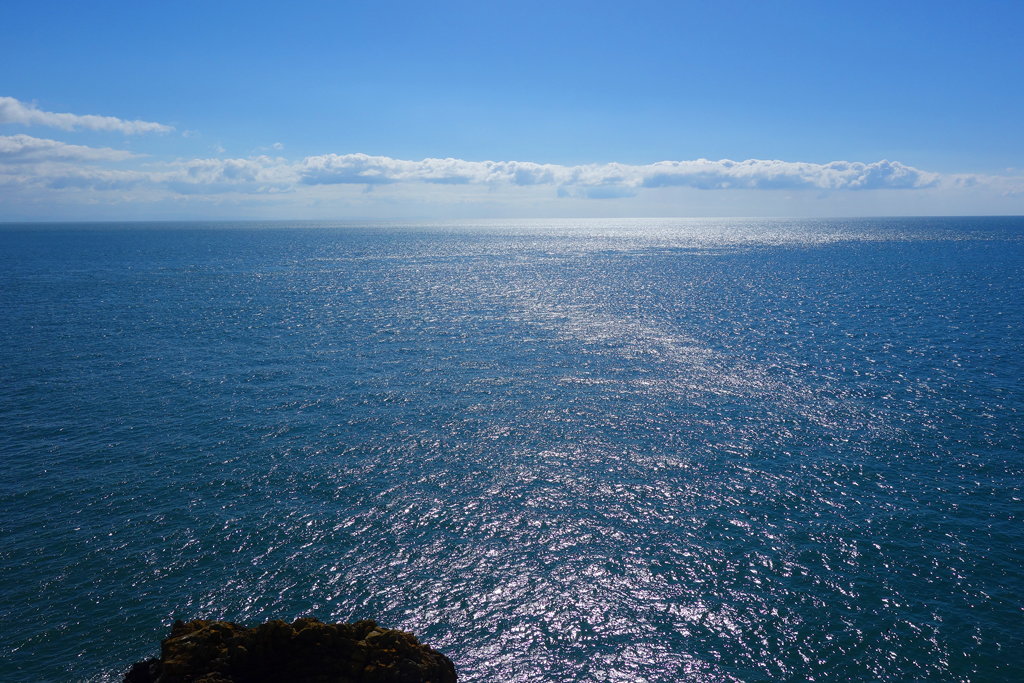 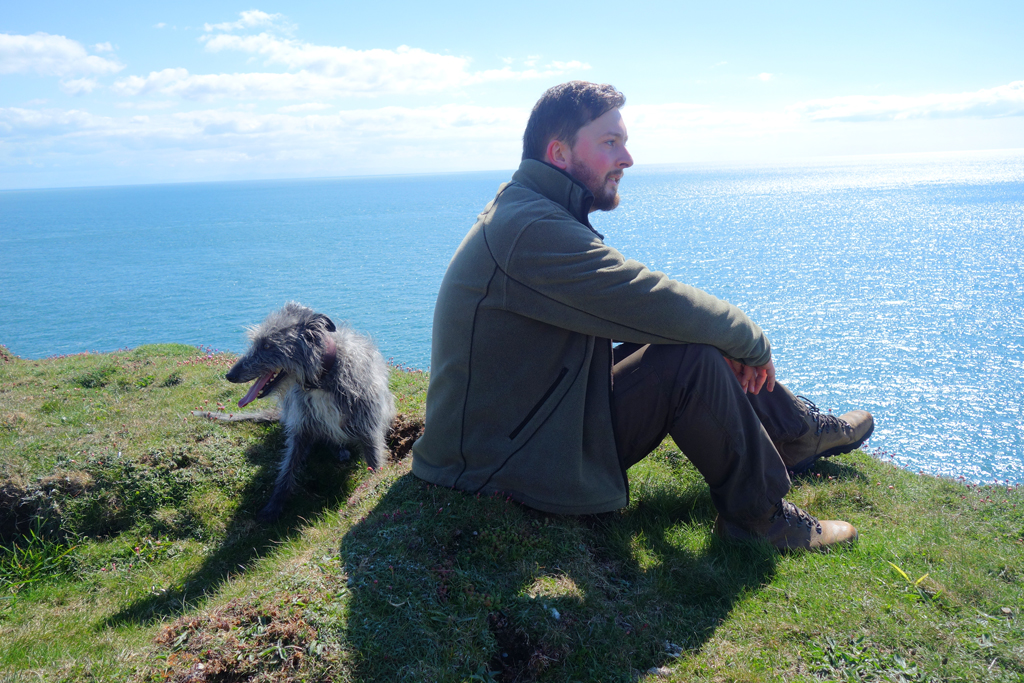 One thing to bare in mind with the whole walk is that this walk is very exposed and there are almost sheer cliffs a couple of feet from the track. Thankfully my walking buddy is a sensible fellow but if you are scared of heights or are planning on bringing small children it is definitely something to bare in mind as any serious fall would easily be fatal.

The coastline in this region has a very rich history not just geologically but socially. Shipwrecks and smugglers were a staple of this region and the route passes some wonderful caves that definitely let the imagination run. 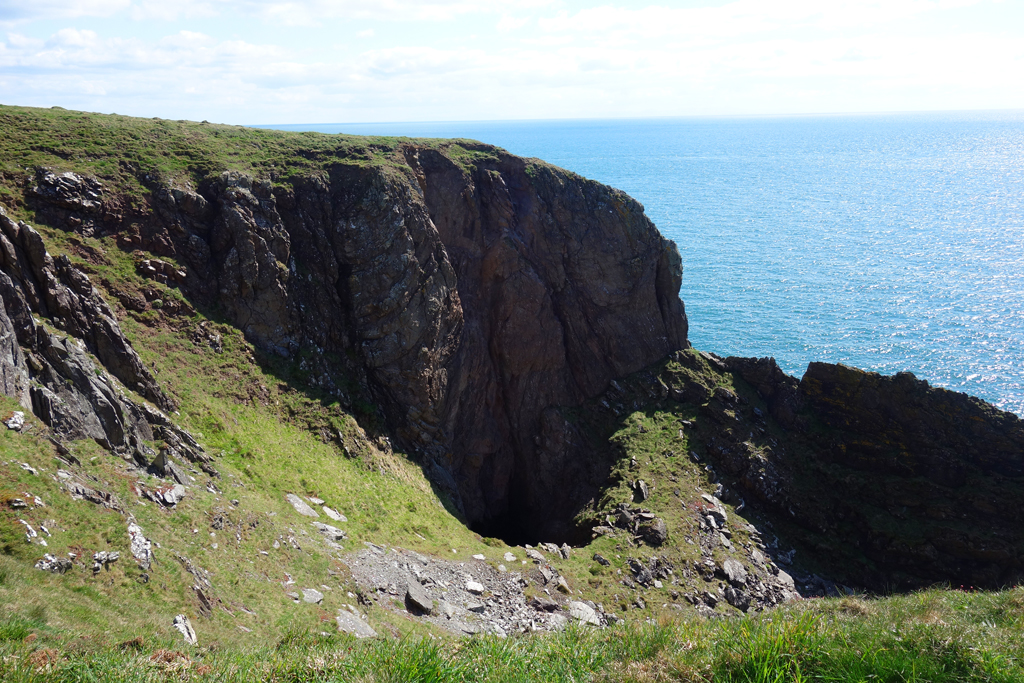 The Dramatic Cliffs and Smugglers Cave

At around the half-way point of the walk you will reach the Burrowhead Holiday Village which is a relatively small caravan park. There are some excellently placed benches on the coastline here which offer sweeping views in all directions.

For the entirety of this walk you will have views of the Isle of Man however it is at this point where you are looking directly towards the Island itself and I couldn’t help but marvel at how close it is to this southern tip of Scotland. To the right, the Mull of Galloway is also easily visible and it creates a very impressive panorama. A real feast for the eyes.

Plus did I mention the benches? 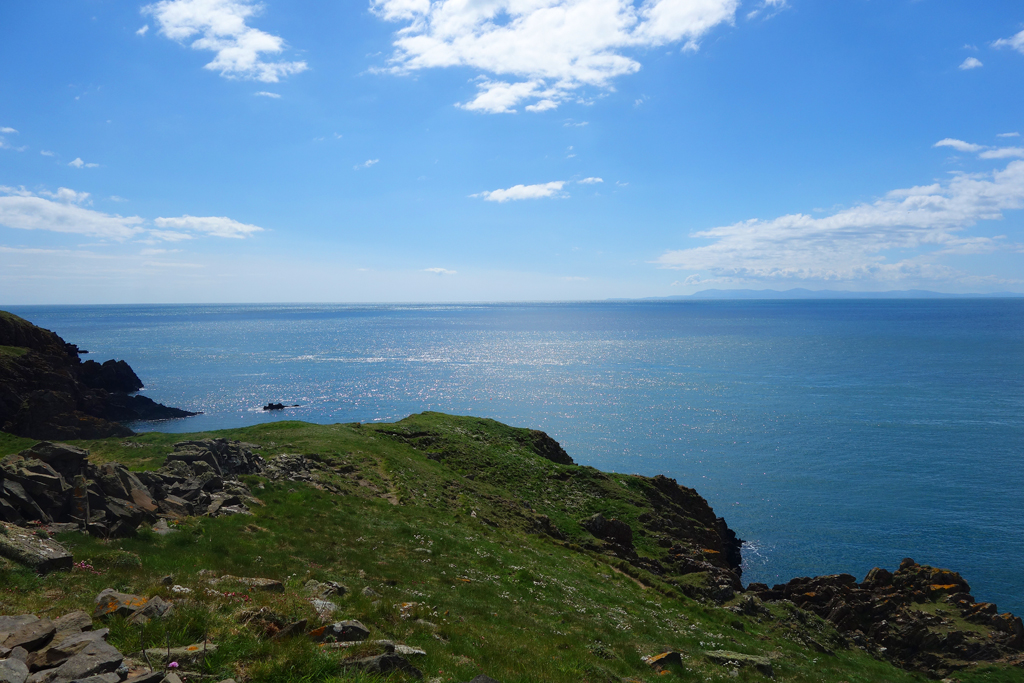 Looking to the Isle of Man

Another wonderful feature of this walk is the wildlife. We saw rabbits, gannet’s, roe deer, cormorants and plentiful evidence of badgers. One particular highlight was a small, rocky outcrop that had at least 8 cormorants perched on it. Of course, I needed a picture of this and I immediately began commando crawling towards the cliff edge. 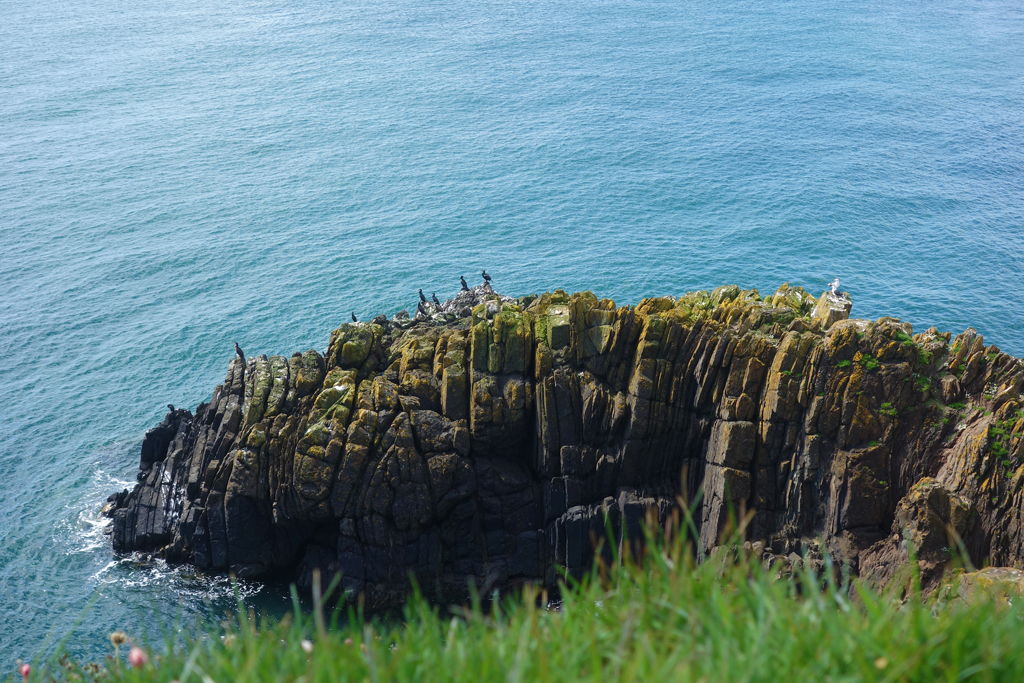 Not far beyond this point, you will get your first look at St Ninian’s cave. It sits on a secluded beach, far below the cliffs. From this point the track starts to wind downwards. I was genuinly excited at this point. What would the cave be like? What would the beach be like? I wasn’t sure what to expect and the sense of anticipation was building, especially seeing the beautiful setting of the cave. 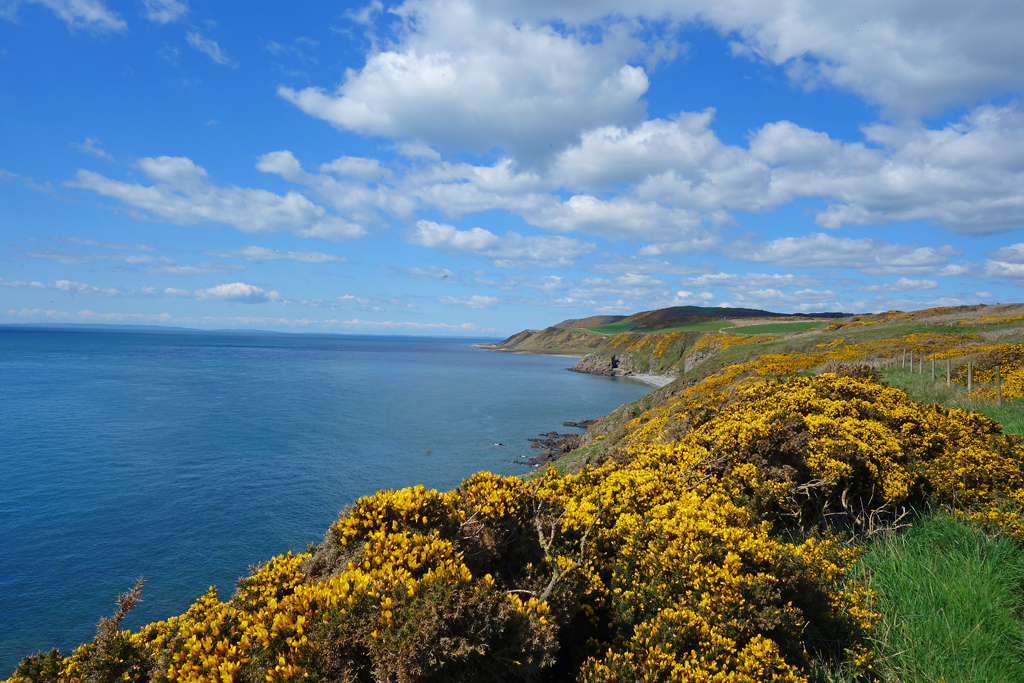 The Cave Comes Into View

I also want to reiterate that the walk is wonderfully signposted. Even at this point, there were still walking posts guiding us forward. 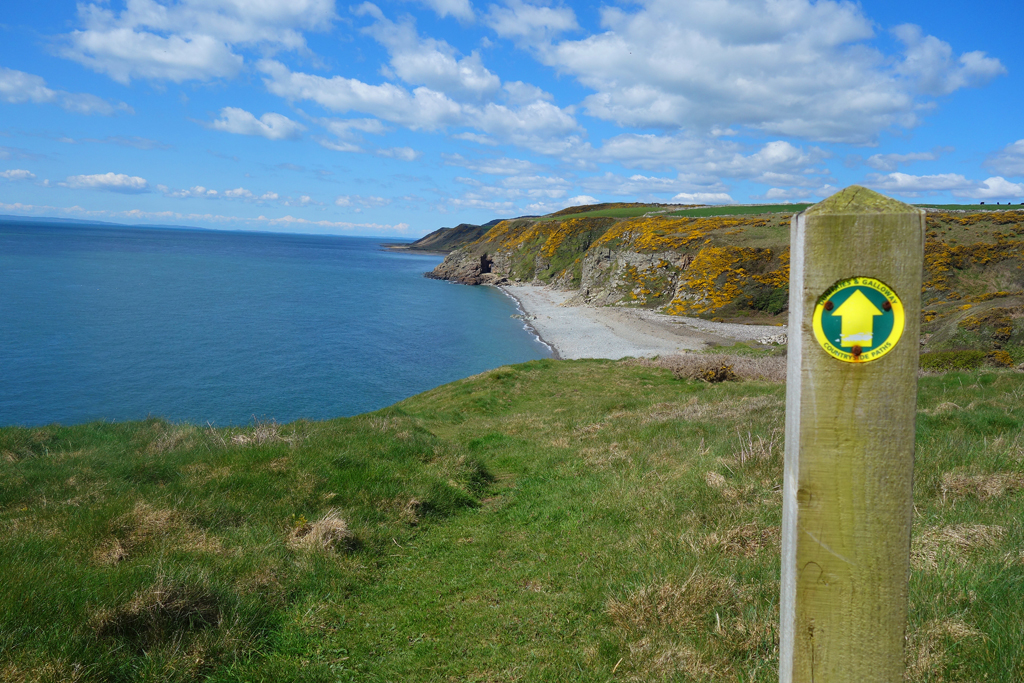 Now so far in this story I have tried to be informative and to give some kind of narrative to this walk. However, paragraphs of text will not do justice to what we experienced when the path dropped down onto the beach. The beauty of this secluded beach examplifies why I started this website and why I love to be outside exploring.

The sun was shining. I discovered that the beach was actually full of beautiful, rounded pebbles and stones. The sea water was some of the clearest I have ever encountered: I could easily see the sea bed for a considerable distance. As I was enjoying all of this a small boat sailed into view. A localman at work, collecting the buoys in the sea. His boat gently bobbed along as we strolled towards the cave, making a fantastic backdrop to the final stage of our journey.

As for the cave itself? It was incredible. A small cave. More like a large dent in the rockface. However, there is an information plaque (kudos to Historic Environment Scotland for providing this) and, perhaps more poignantly, there is a huge amount of life in this small cave. Not animal life, rather, evidence of pilgrimage by many people over the centuries who have carved their names on the rocks and others who have left momento’s of deceased loved ones. The cave is littered with crosses and even coins, some of which are very old and weathered. Some of the carvings on the rock face were dated in the 18th & 19th centuries.  It was an incredibly atmosphere place to be.

Now allow me to stop talking and show you this beautiful spot on Scotland’s coast. 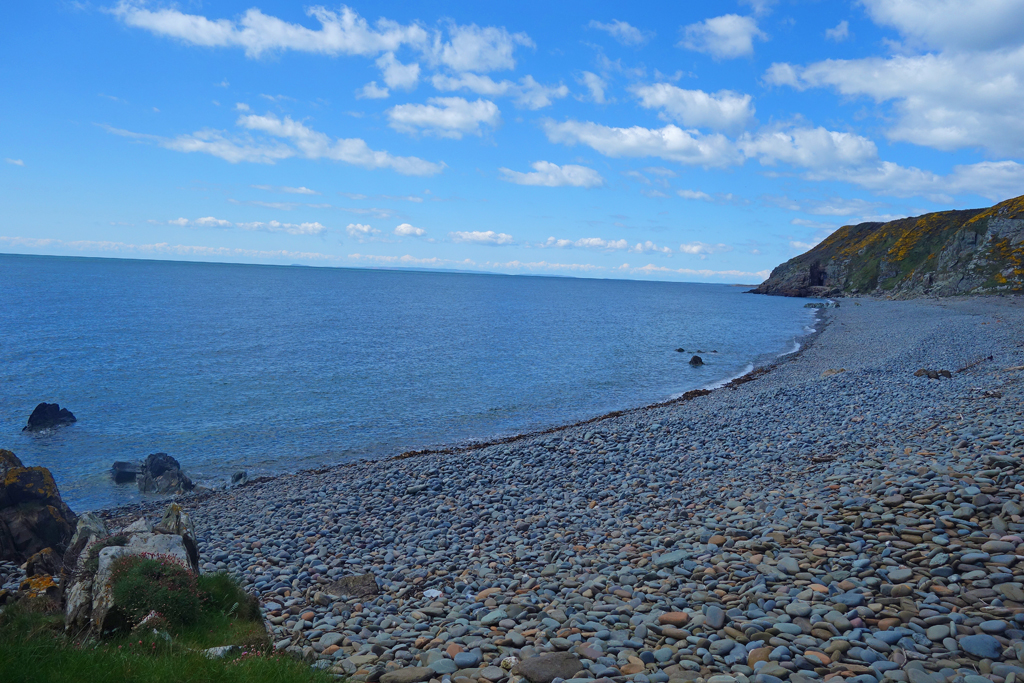 Arriving on the Beach 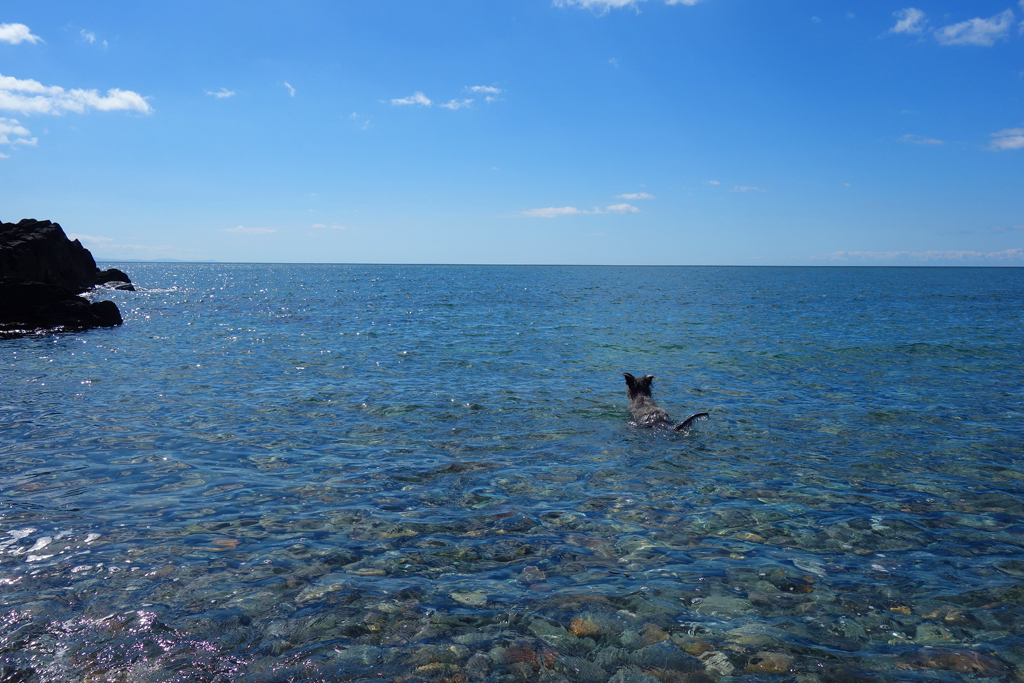 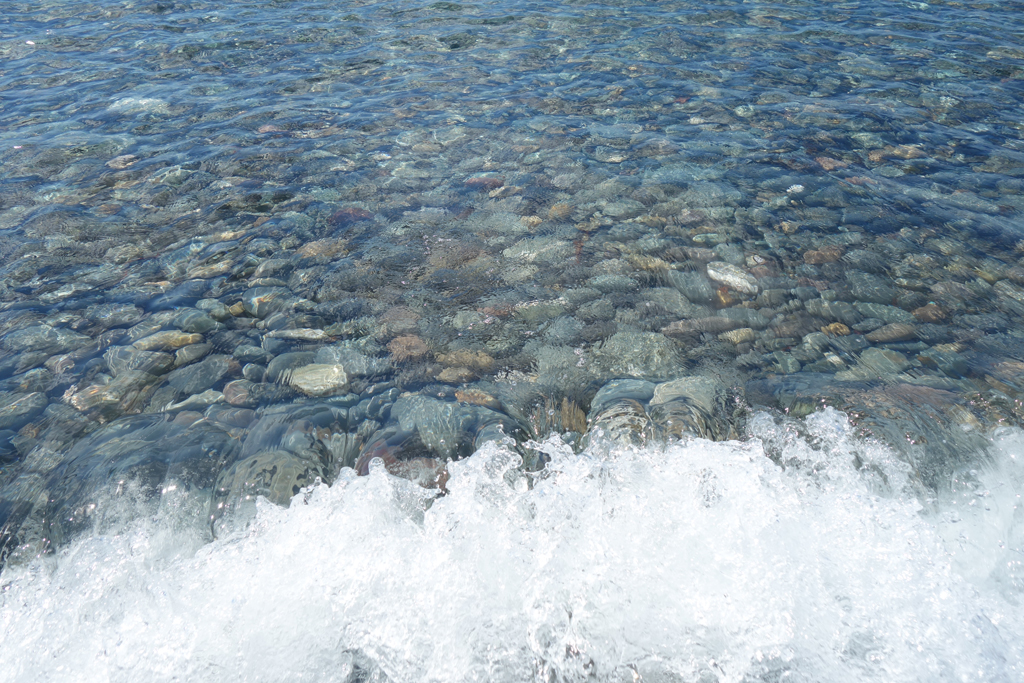 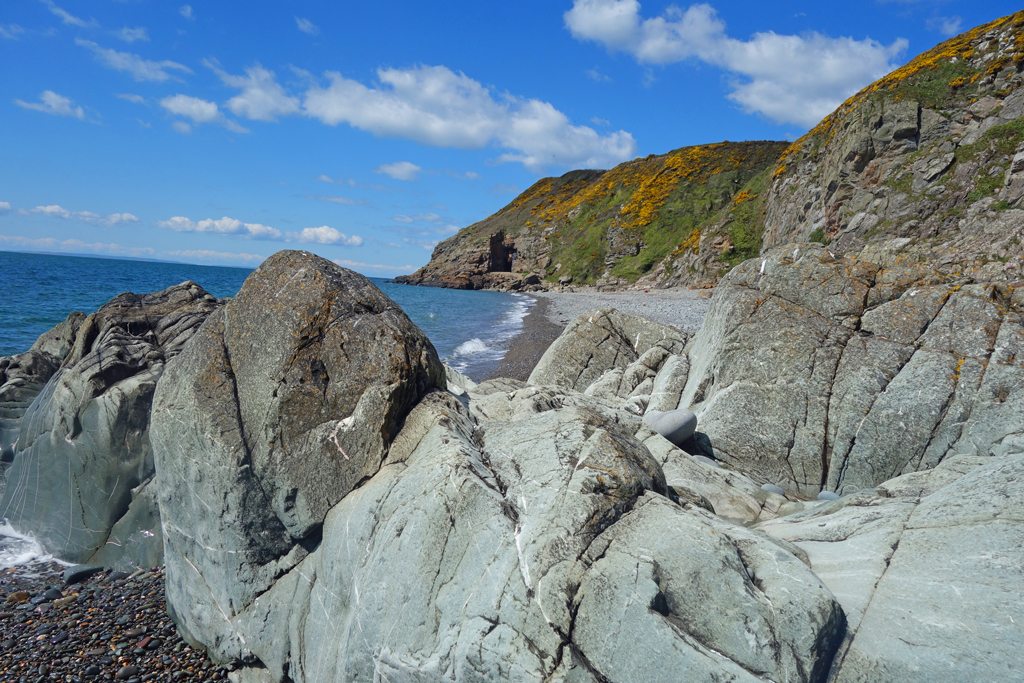 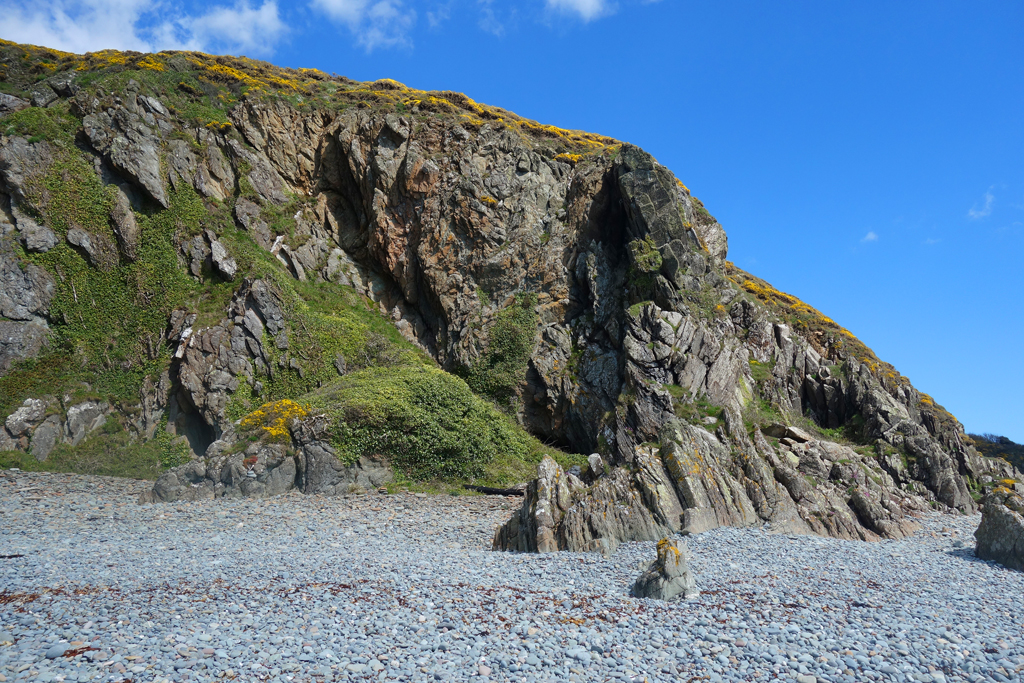 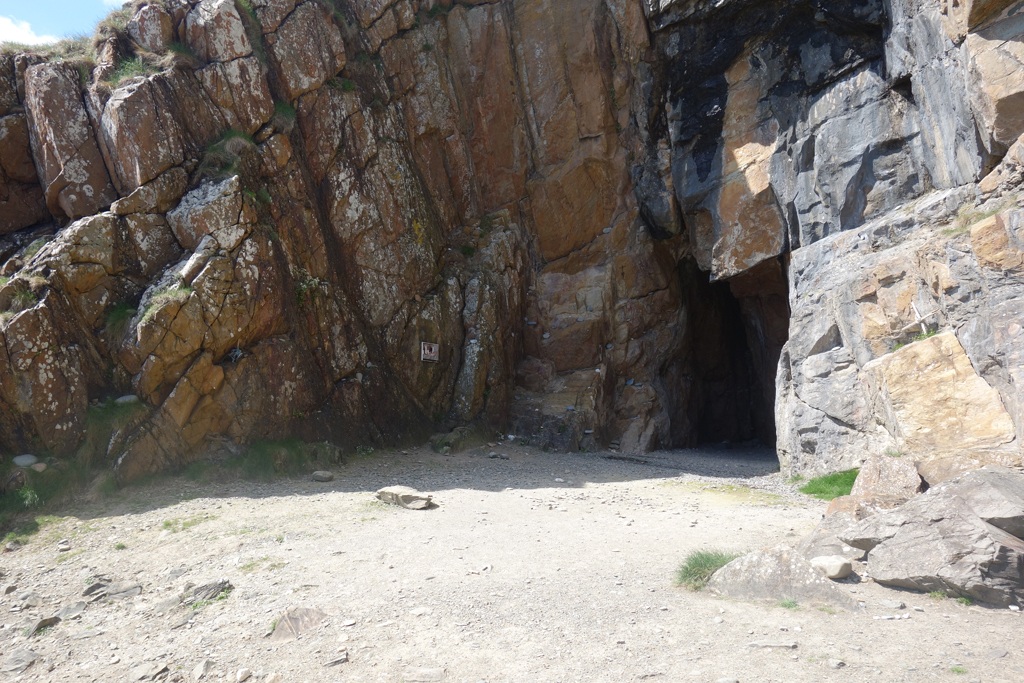 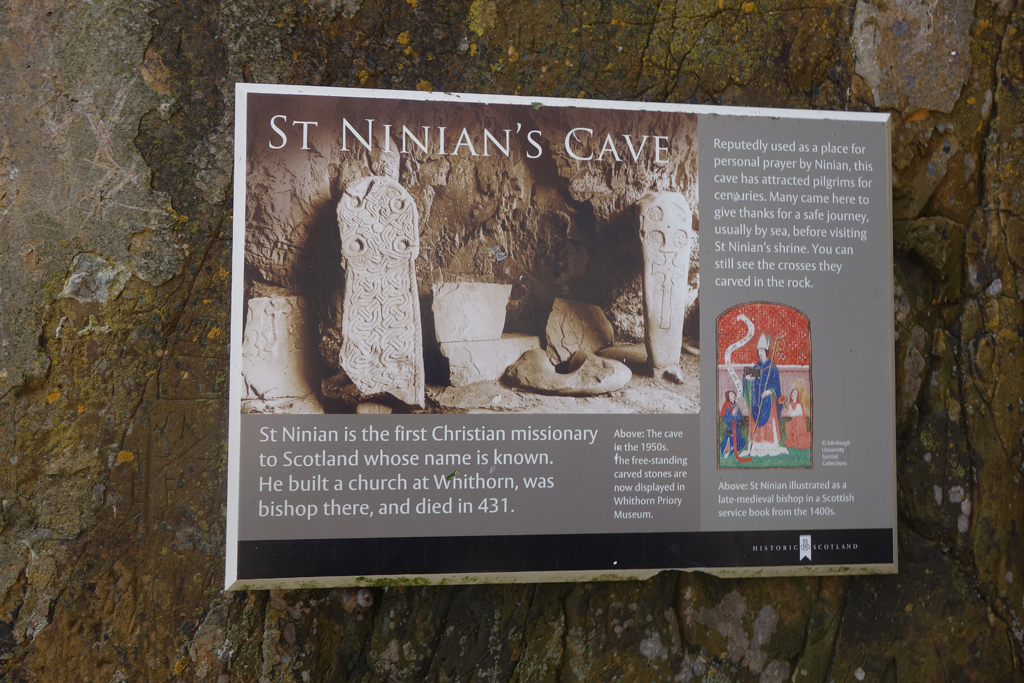 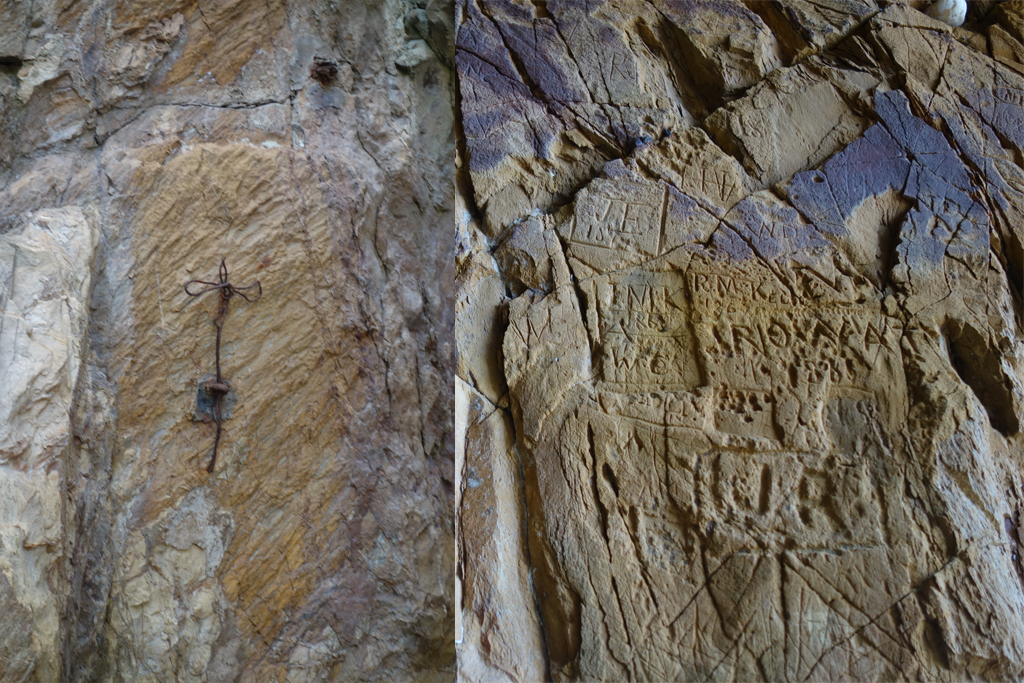 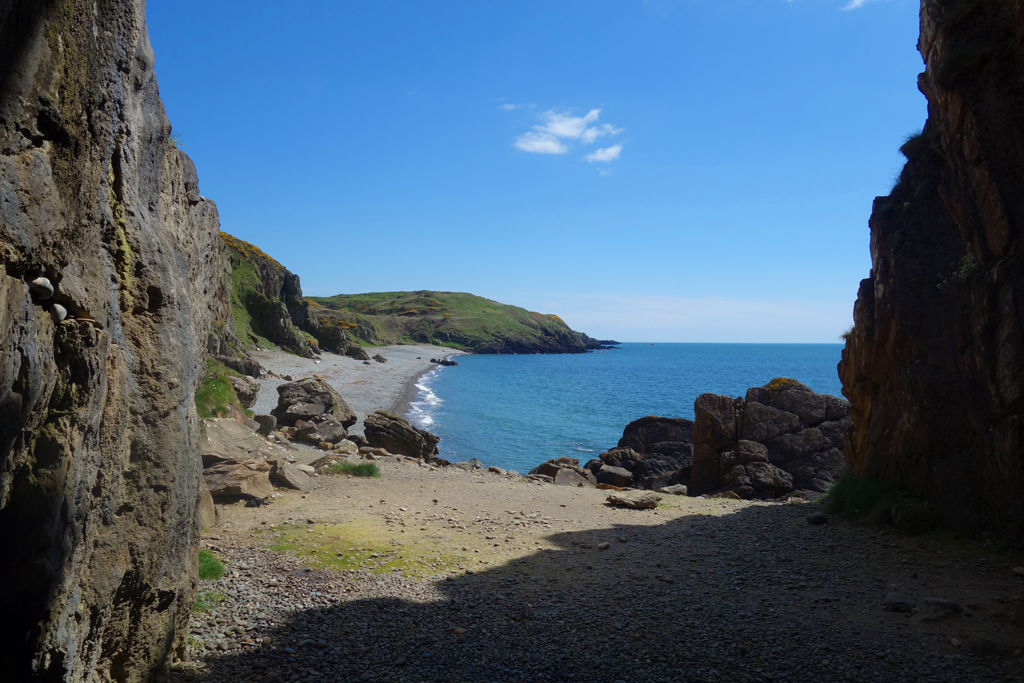 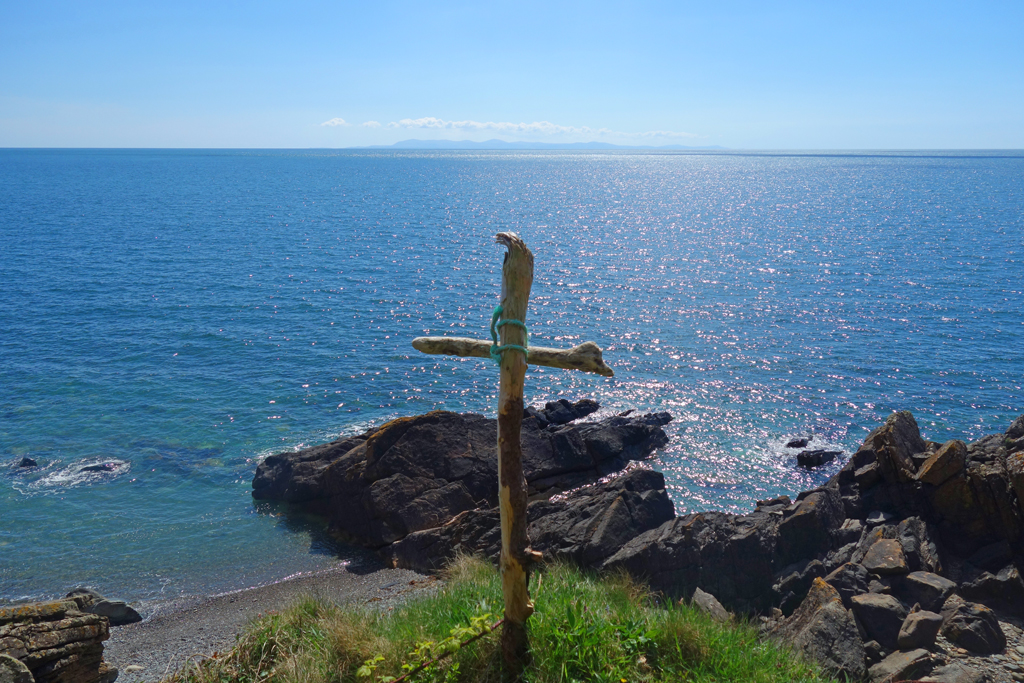 I spent a long time on the beach. Taking photo’s, admiring the cave, reading the inscriptions and marvelling at the amazing views. Eventually, I departed and returned via the same route back to the car park at the Isle of Whithorn.

I have done a lot of walks in my life and, excluding mountains, this certainly ranks as one of the best I have ever done. It was a spectacular day and so well signposted that no navigation was required.

I strongly recommend you do this walk if you live in the area or if you are on holiday in Dumfries & Galloway.