Sometimes a great walk doesn’t need beautiful sunshine and blue skies: sometimes it needs rain, clouds and healthy dose of blizzard. That’s what I got on my recent hike up Hart Fell.

Hart Fell is a Corbett lying about 6 miles to the north-west of the pretty little town of Moffat in Southern Scotland. At 2,650 feet it’s nowhere near the largest of mountains that Scotland has to offer but I was excited. Hart Fell lies at the end of a glen and my research had suggested that the best way to climb this hill was to complete the ‘Hart Fell Horsehoe’: an 8-mile ridge walk around the circumference of the glen. So on a grey friday, when everyone else was at work, I headed off towards Moffat.

Just past Capplegill is a parking area and it wasn’t long before I was ready to head off. It was still grey but the rain had stopped and it gave Hart Fell and the glen a gloomy atmosphere. 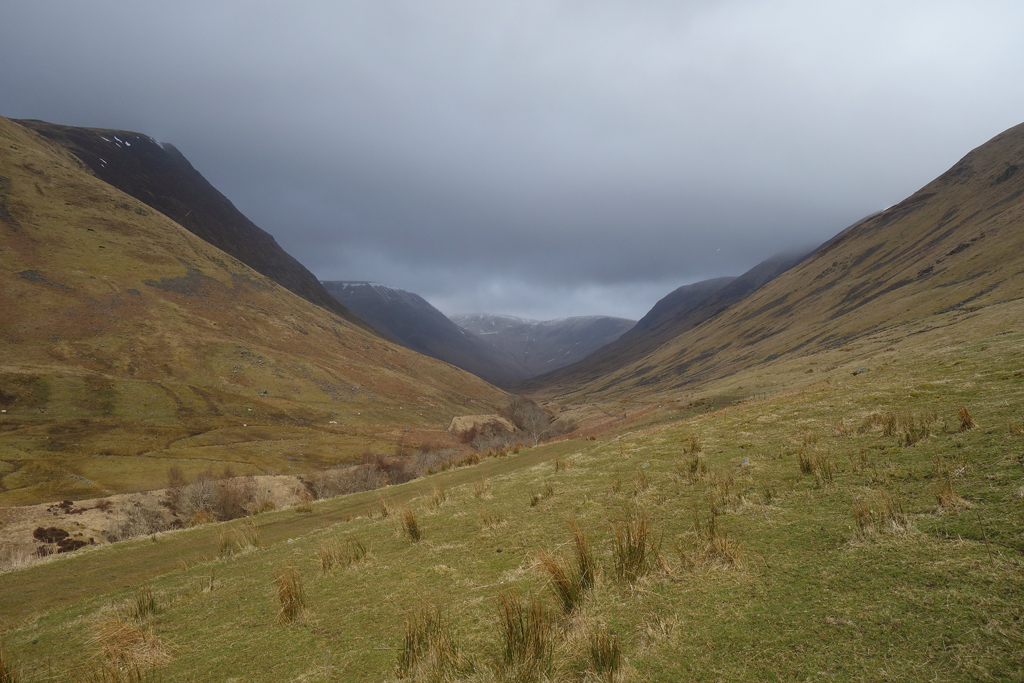 A Look Down the Glen: Hart Fell in the Distance

Unfortunately for me, there would be no pleasant glen-walk to get myself warmed up before tackling the Corbett. If I wanted to do the horseshoe properly I would have to ascend. Immediately. Thankfully I had opted against the large breakfast before I left. My warm-up would be a steep climb!

(Unlike what some other guides suggest, I would recommend turning RIGHT from the position pictured above. This saves you having to cross the burn to the left and makes the return walk much more pleasant) 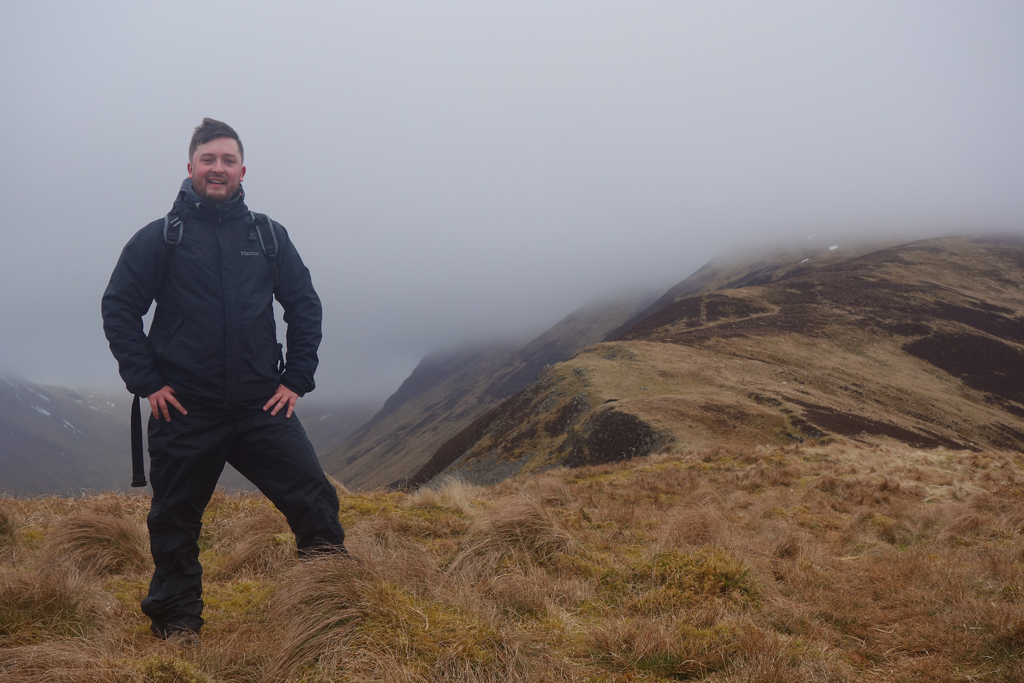 Pausing for a Break: Note the Soon-to-be Essential Waterproofs…

…And The Rather Cute Locals

No amount of baby goats or photo stops could stop the inevitable ascent up into the mist. What would it be like up there? Perhaps not so bad. Maybe just misty. Perhaps a gentle powdering of snow? It was the end of March after all… 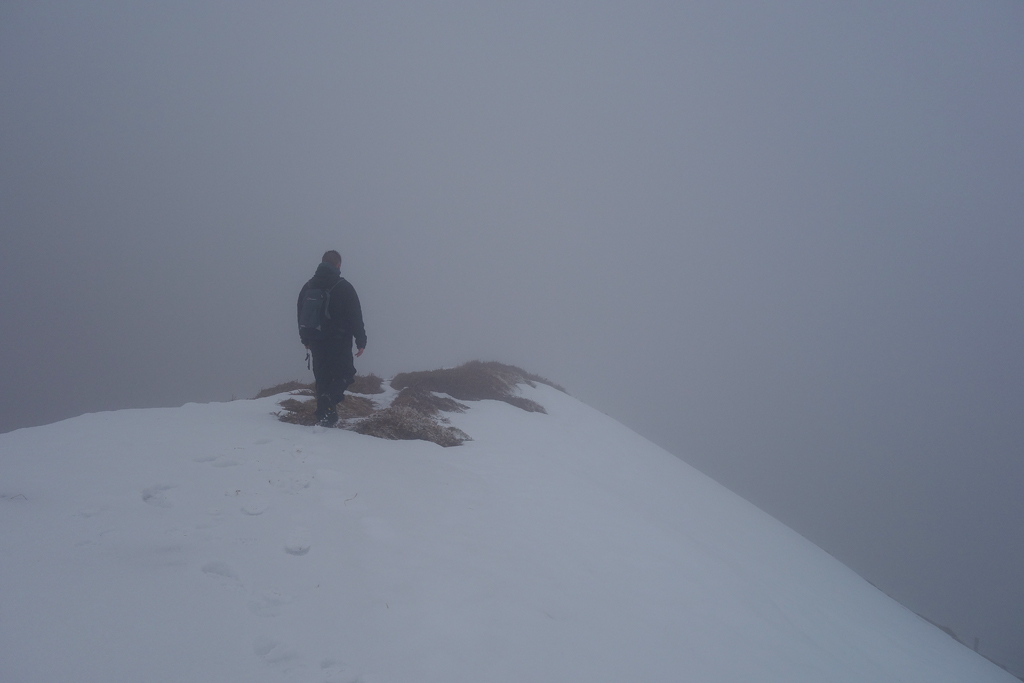 In all seriousness I was loving it. The snow was crunchy, the mist was thick and the silence was beautiful. I love walking in these conditions, it’s like being in the wild. No people, no cars…no anything. When the mist did break, the views and atmosphere were spectacular. 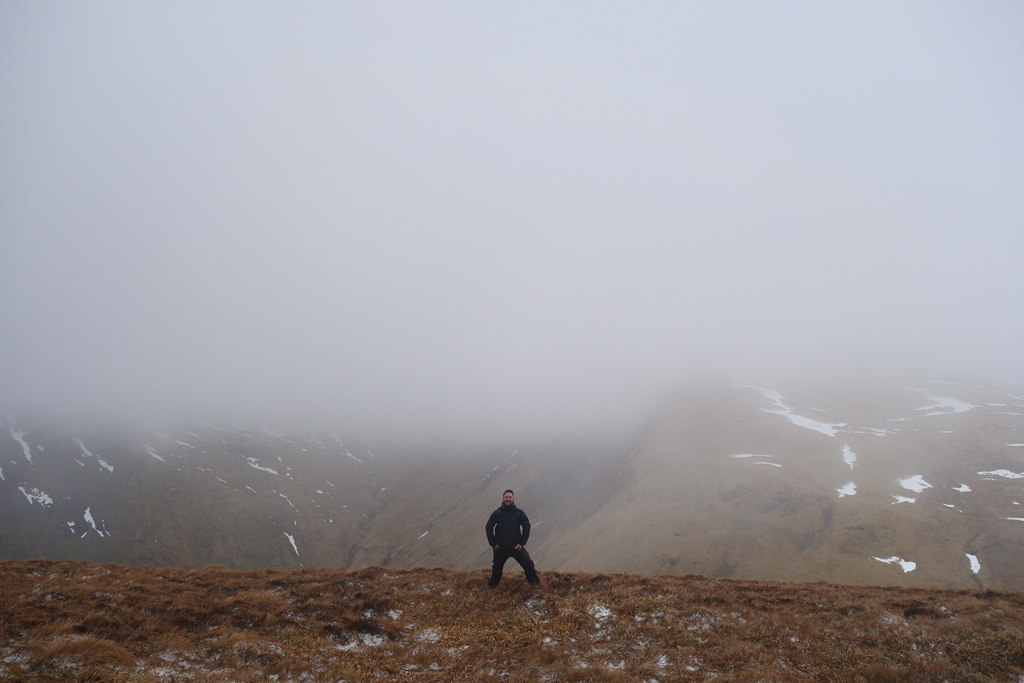 Walking this horseshoe route is, in my opinion, the best way to walk Hart Fell. Walking the ridge requires a lot of ascent, descent and then more ascent. It is not an easy, flat ridge but every loss or gain of altitude brings with it new views, new perspectives and more scenery. 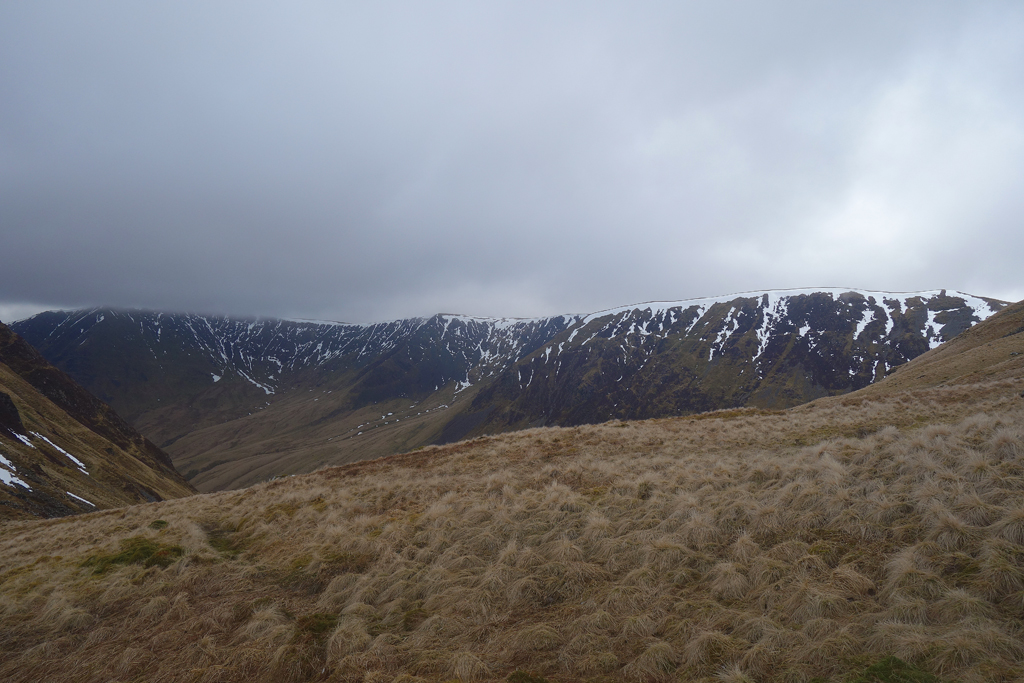 Looking to the Other Side of the Glen 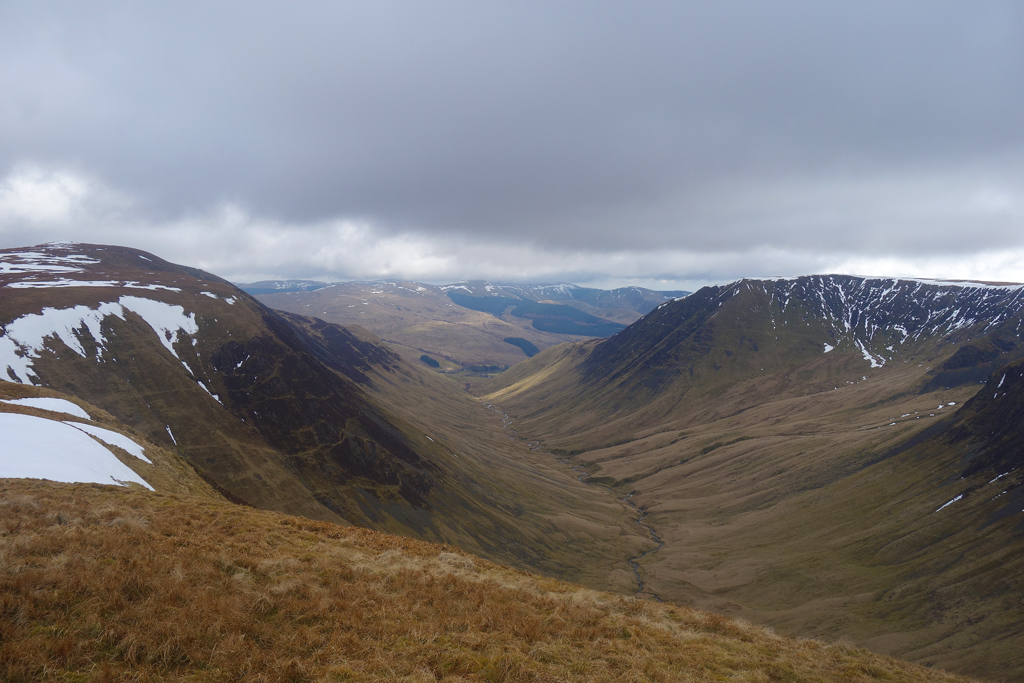 At this point in the day, the weather finally broke. As the summit was getting closer and closer, the clouds lifted, the sun appeared and I got my first look at blue skies! It was almost as if Hart Fell had decided to reward me for my efforts and give me some views. It also made for a wonderful contrast to the gloomy conditions I had faced up to this point in the walk. To reach the summit, you simply have to follow the fence-line until the cairn appears. 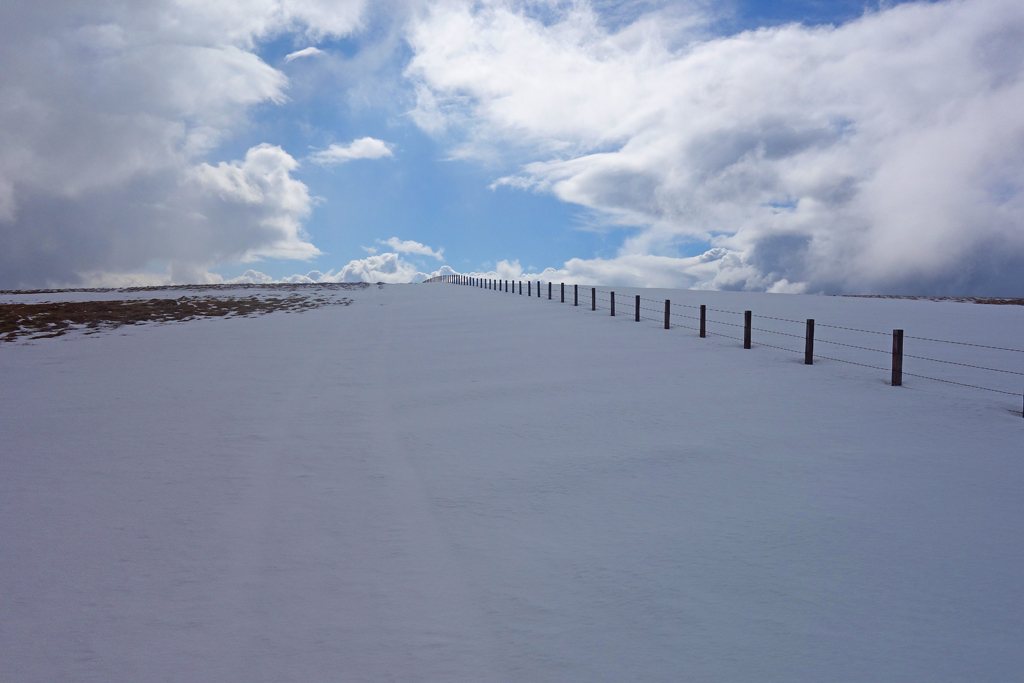 The Final Push to the Summit: Blue Skies Appearing! 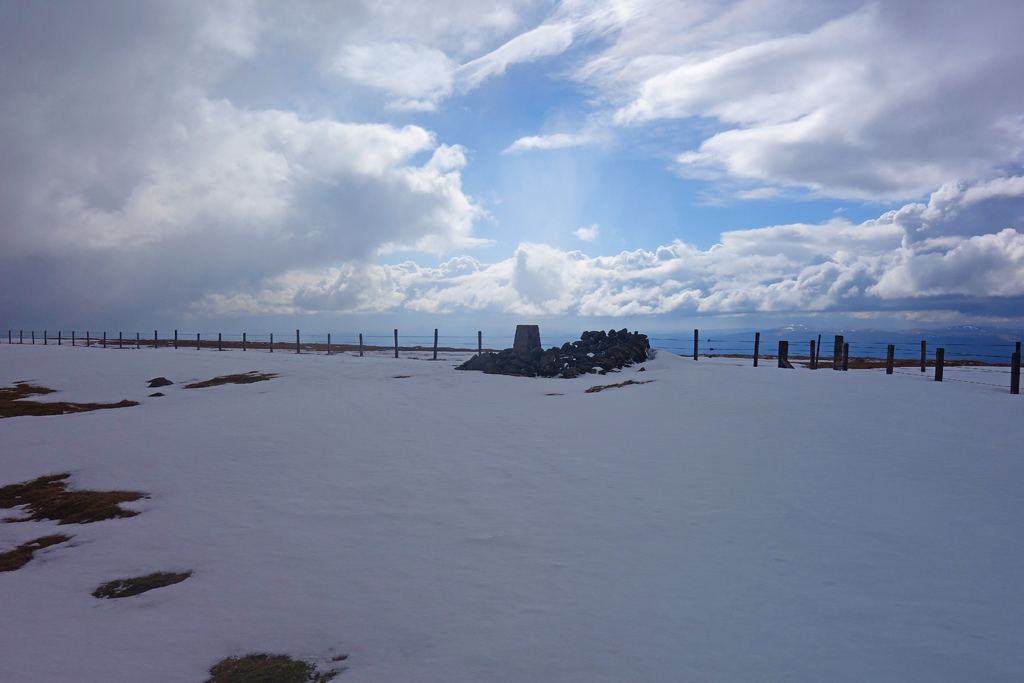 The Summit Cairn is Revealed 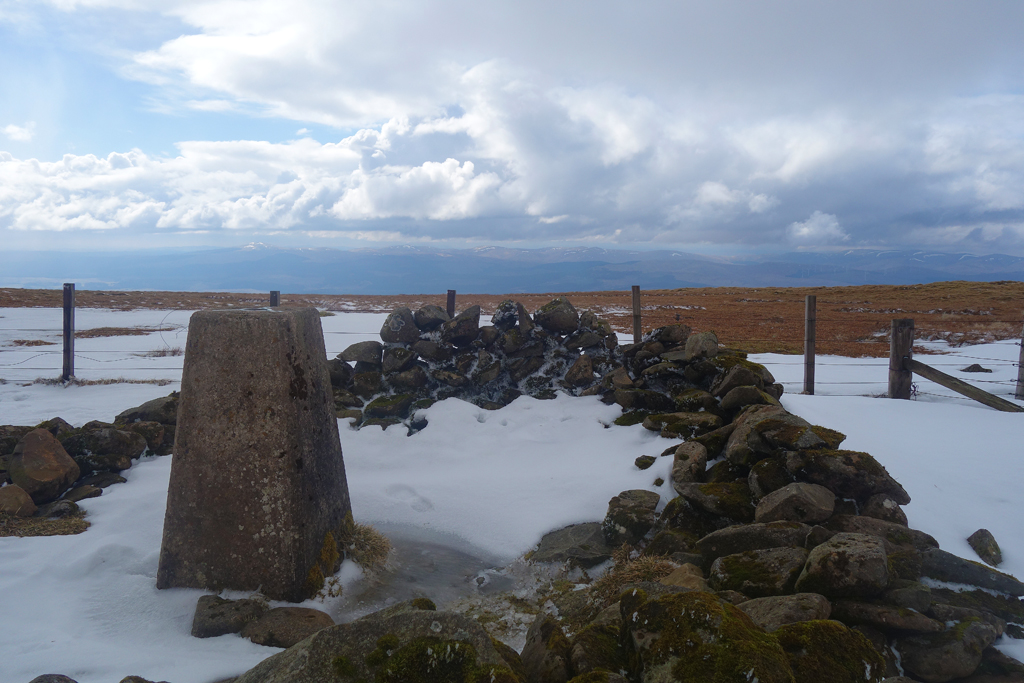 The views from the summit were superb. Due to the prominence of this summit in the lowlands, the views to the north spread for miles and, as the weather had eased, it was quite pleasant to sit at the cairn and enjoy the solitude this summit had brought. I’d been enjoying the views to the north so much (and my sandwich for that matter) that I hadn’t quite noticed the change of heart from Hart Fell in regards to my pleasant lunch break. 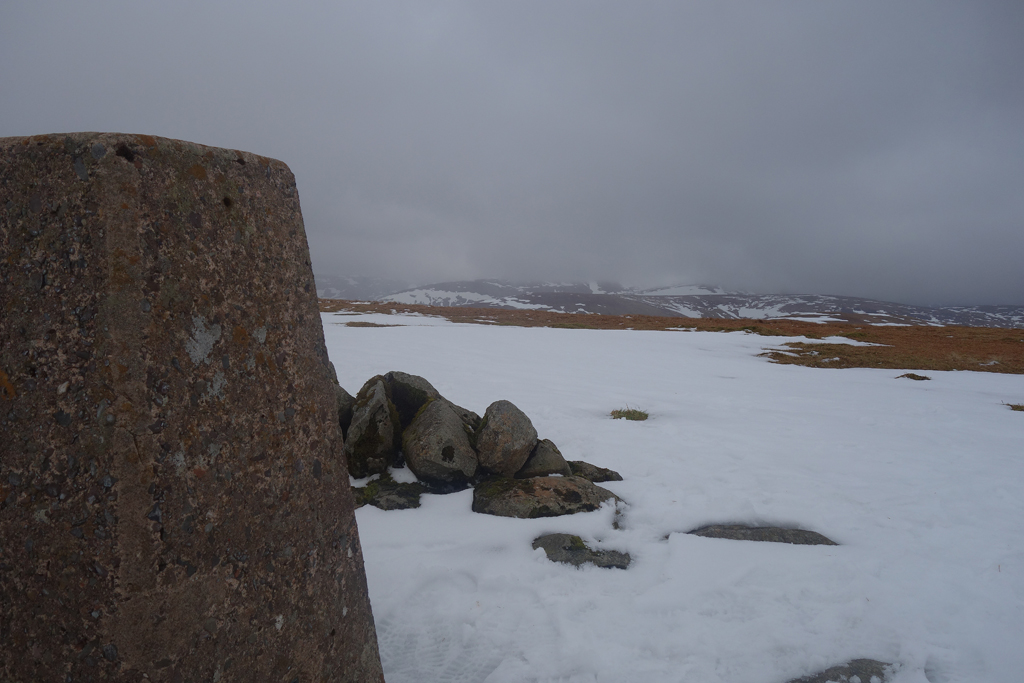 Another Wave of Mist Approaching

I quickly finished my lunch and made my preparations to depart the summit. Hopefully it was just some mist with perhaps a little drizzle…

I was wrong. Hart Fell had decided I would pay for my nice lunch by suffering a blizzard. 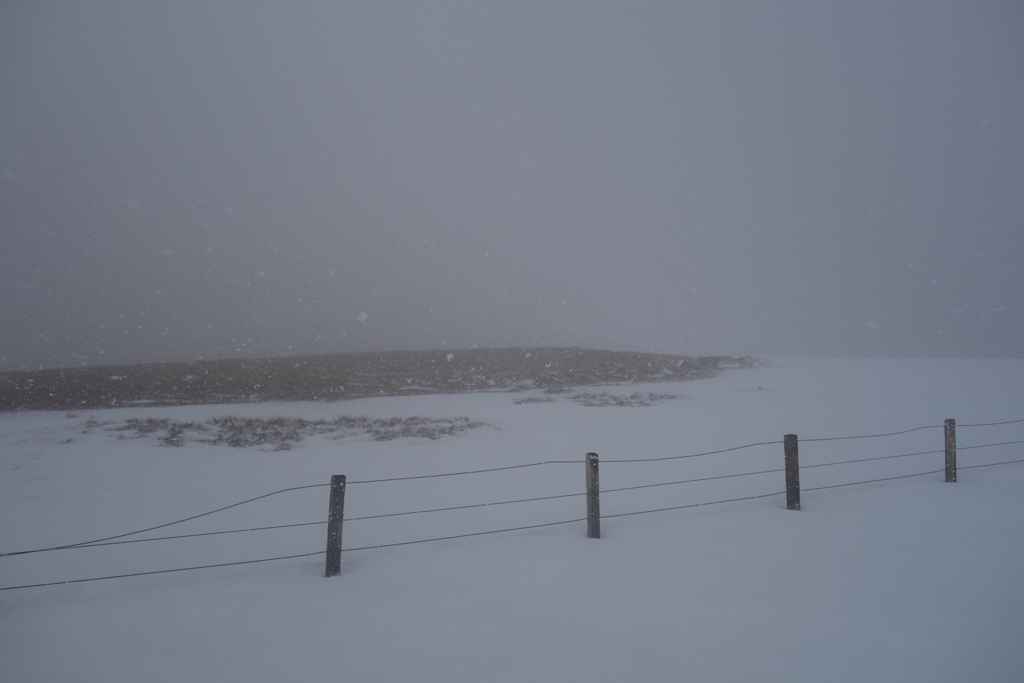 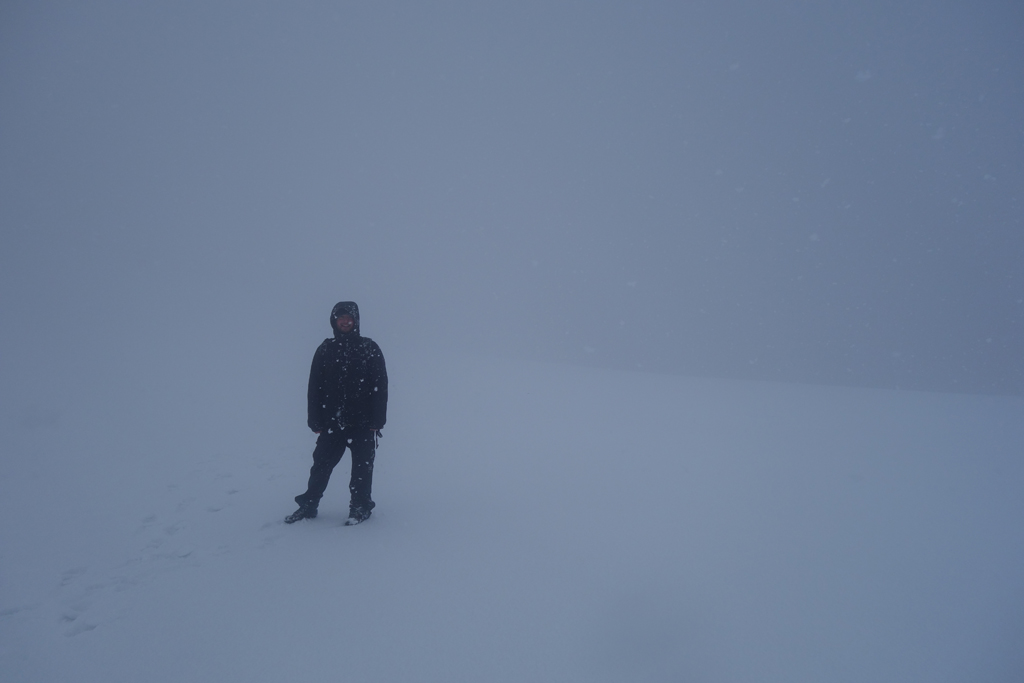 The snow was not mild. Initially it was stinging, driving hail which then morphed into huge white flakes. It was relentless and it had descended in minutes. In traditional Scottish fashion I’d had all the seasons in one day. Mist, drizzle, sunshine and now snow.

Do you want to know the best part? I was loving it. I’d been up hills, down hills and back up hills. I hadn’t seen another person all day. It had been sunny and now it was snowing in blizzard conditions. None of this was a hassle. It was just a joy to be out in the hills. It was a midday, it was a Friday and all across the country people were couped up in office buildings staring at PC’s while others were labouring in factories. Here I was in this beautiful part of Scotland and I was caught in some snow. I felt alive. 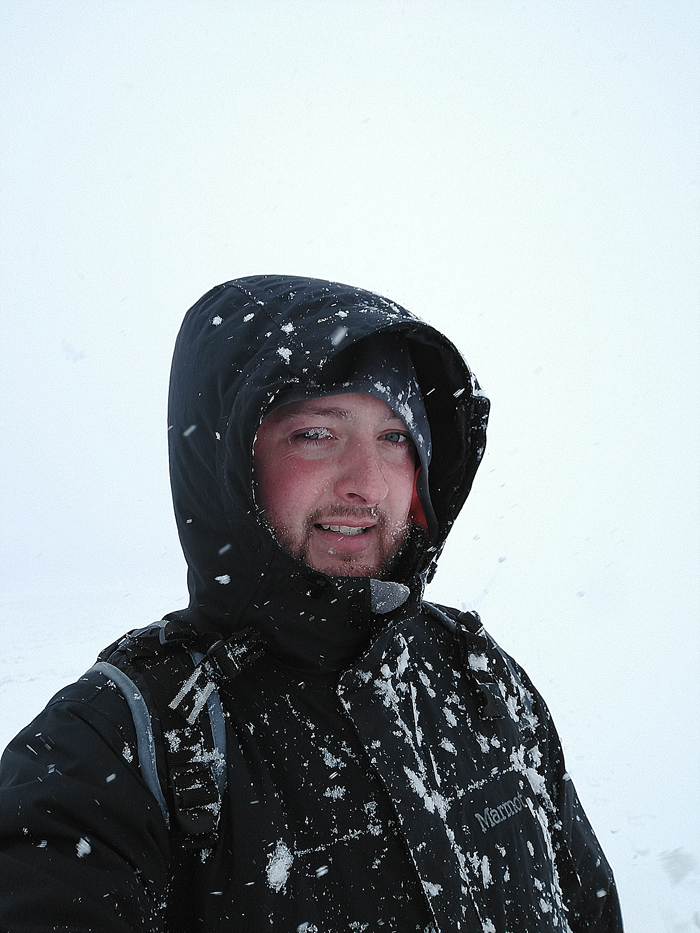 The weather eventually eased and the snow stopped. The return walk along the ridge was pretty easy-going and slowly but surely the cloud started to lift and the views of this beautiful glen started to return. If you decide to do this walk via this route you will eventually descend towards a very pretty gorge through which the hang burn runs. 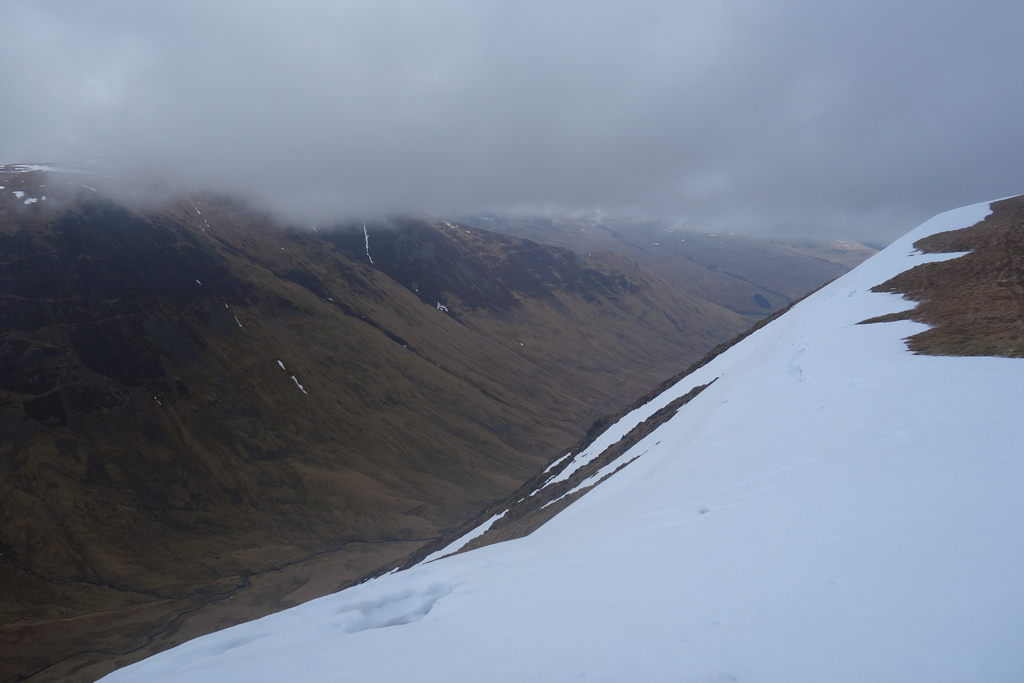 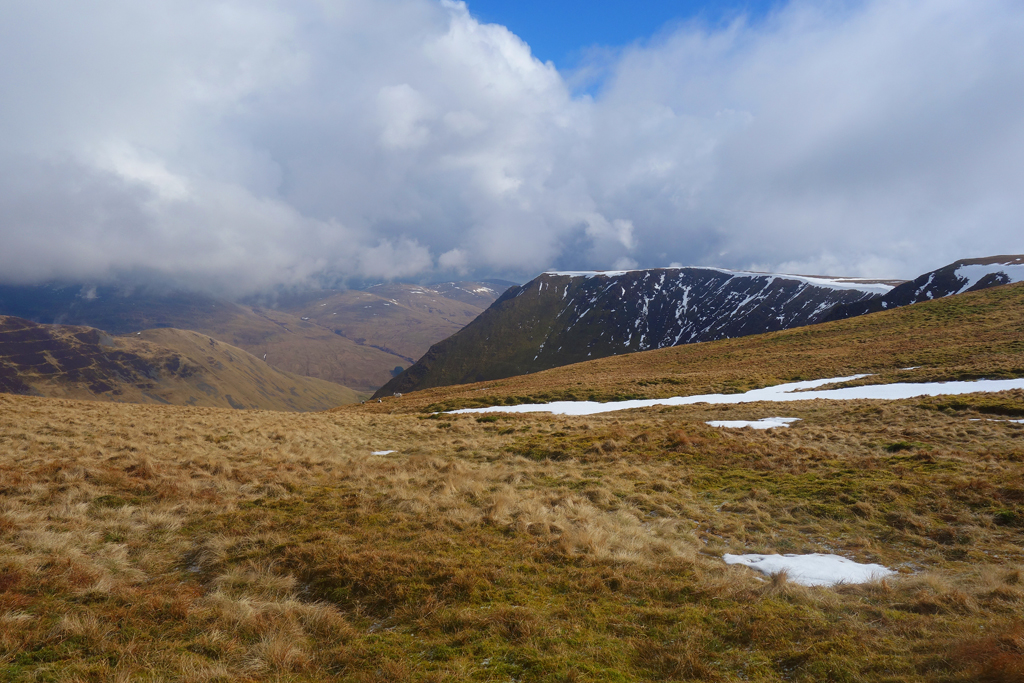 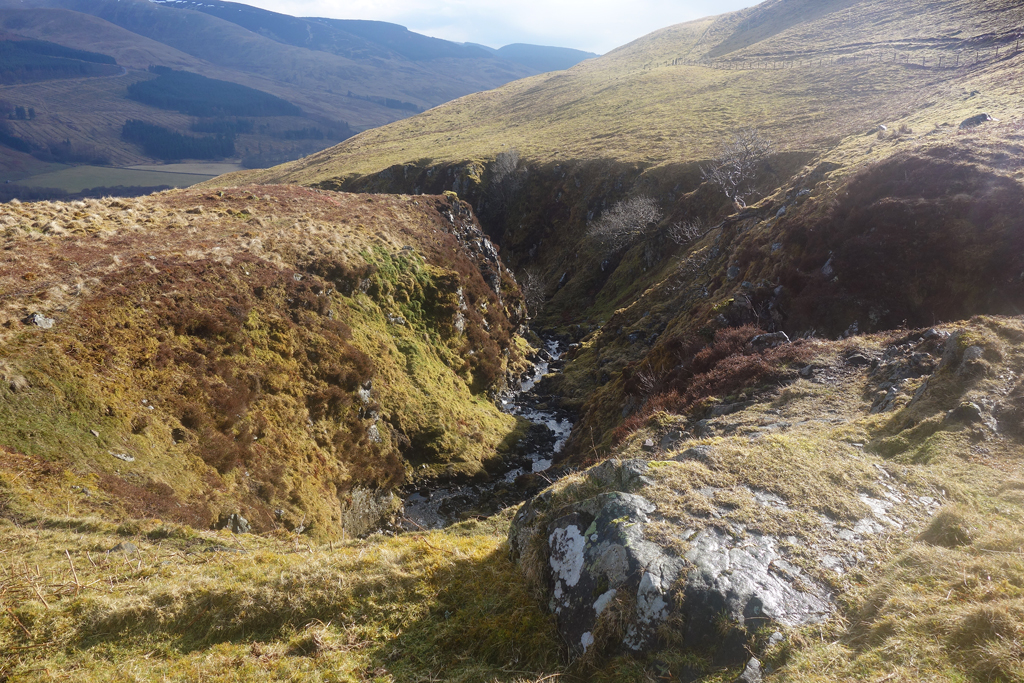 The Gorge With the Hang Burn

The gorge has a very pretty waterfall which is created by a zig-zagging burn just above it.  It’s a really nice spot to stop for a break and listen to the water.

From this point on, the walk simply follows the burn back down to the main road, a very short distance from the car park. 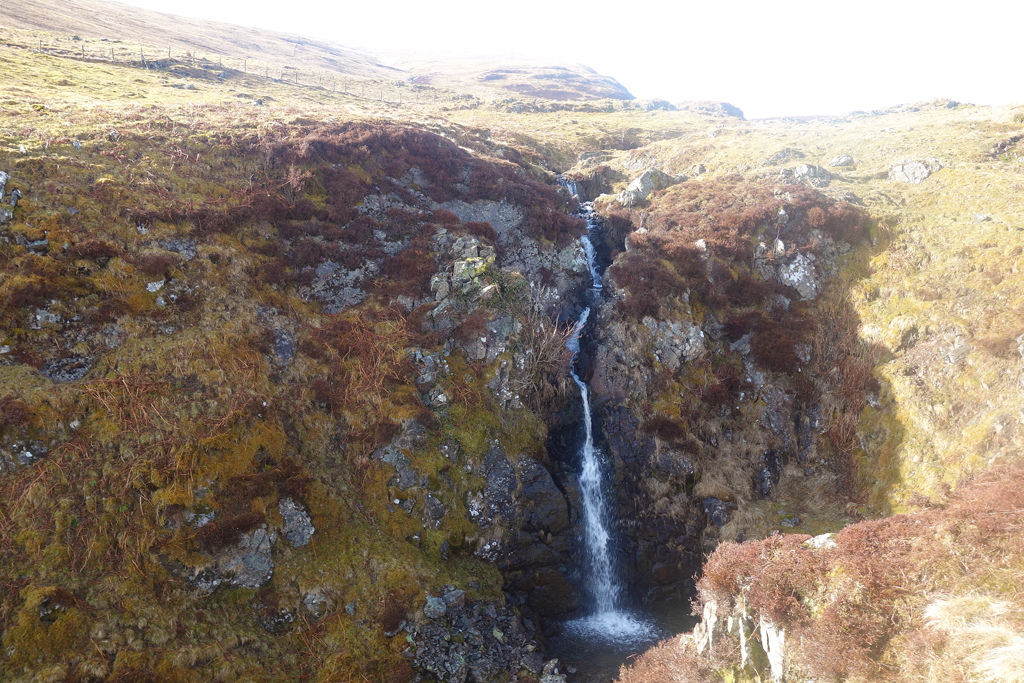 I can’t speak highly enough of the horseshoe at Hart Fell and how much fun I’d had on this walk. The unpredictable and temperamental weather only made the day better and I always love crunching through some snow! I’d had a wonderful day on this hill all for the price of the diesel it had taken to get me there.

Hart Fell may only be a small Corbett but it is big on enjoyment, especially if you follow the horseshoe route. If you can, I’d definitely recommend that you spend a day at Hart Fell.