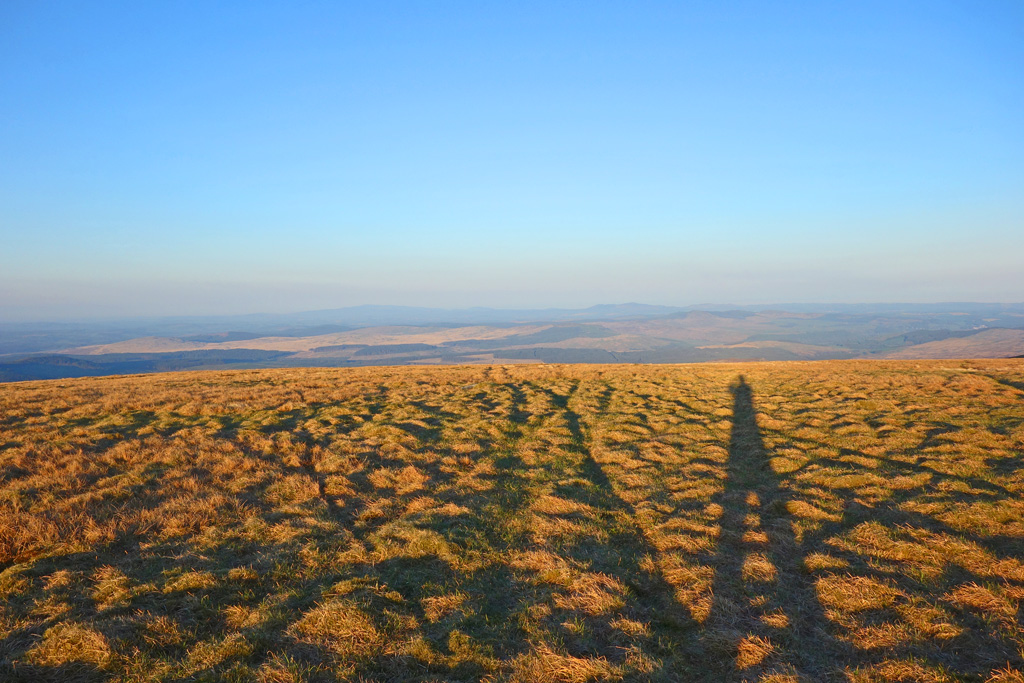 Cairnsmore of Fleet is a relatively small hill, with a tragic history, in Dumfries & Galloway, nestled on the coast between Creetown and Newton Stewart. Standing at 2,333ft it is classified as a ‘Graham’ (a mountain between 2,000 – 2,499ft) and, despite having climbed it before, it has always been on my re-do list for one very specific reason:

To catch a coastal sunset.

Cairnsmore of Fleet is situated at the hamlet of Palmure, right where the River Cree meets the sea at Wigtown Bay. From the summit, views stretch out over the Isle of Whithorn to the Isle of Man in the south, to Stranraer in the west and into Ayrshire in the north.

Despite having climbed a few hills in my time, I’ve never actually set out to climb one with the sole purpose of watching the sunset. If I’d been wild camping somewhere it would’ve been easier but this had to be done in one go: I needed a nice day, very few clouds and to time it just right. Too early and I’d be waiting on a summit, too late and I’d miss the main event.

Thankfully, it went perfectly and I got to witness one of the most beautiful sights I’ve ever seen.

I arrived at the little parking area, reached by turning off the A75 just before Palnure, at around 17:15 just as the last walkers were leaving. It had been a beautiful day at the end of May, with warm sunshine and barely any clouds and I’d suspected walkers would be out making the most of it but I’d had my heart set on doing this one completely alone and I was glad when the other car left as I was putting my boots on.

I’d made sure to pack some suntan lotion this time (too many times I’ve sunburnt myself on the hills, which is really stupid when climbing thousands of feet towards to the sun!) and, of course, I stopped for a pre-walk selfie. 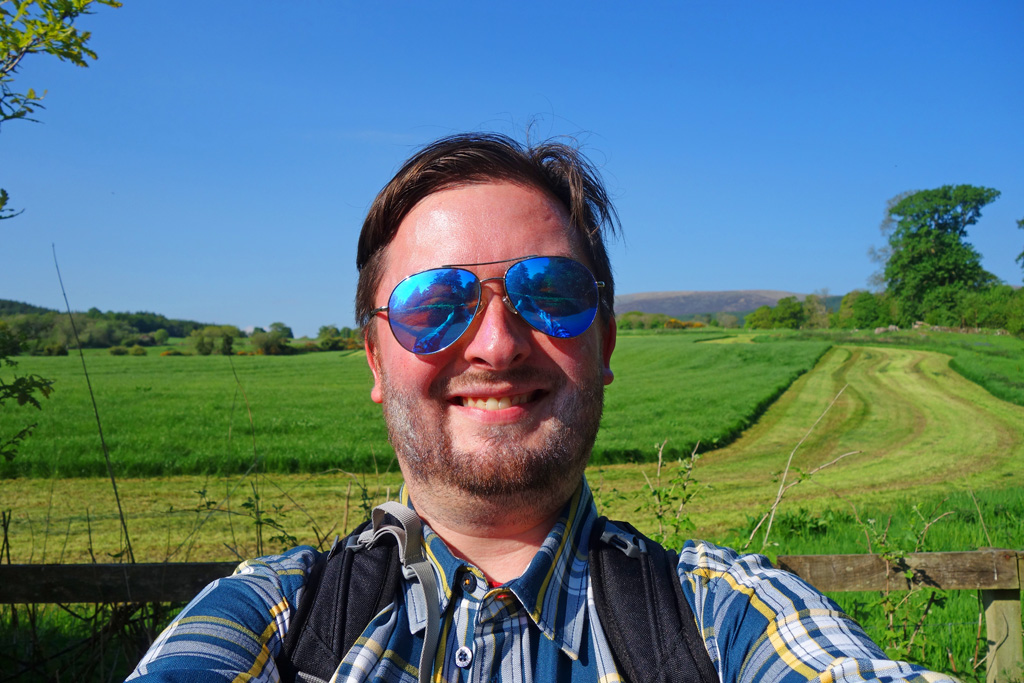 Once through a little gate at the parking area you enter the wonderfully atmospheric woodlands that surround Cairnsmore House. I’d only just started out, was on a time limit and yet I couldn’t resist taking pictures of all the colours that were surrounding me! Purples, reds and pinks of the rhododendron bushes were everywhere.

Following the little road was easy and it eventually leads to a wee ‘Hill Footpath’ sign that leads deeper into the woods. 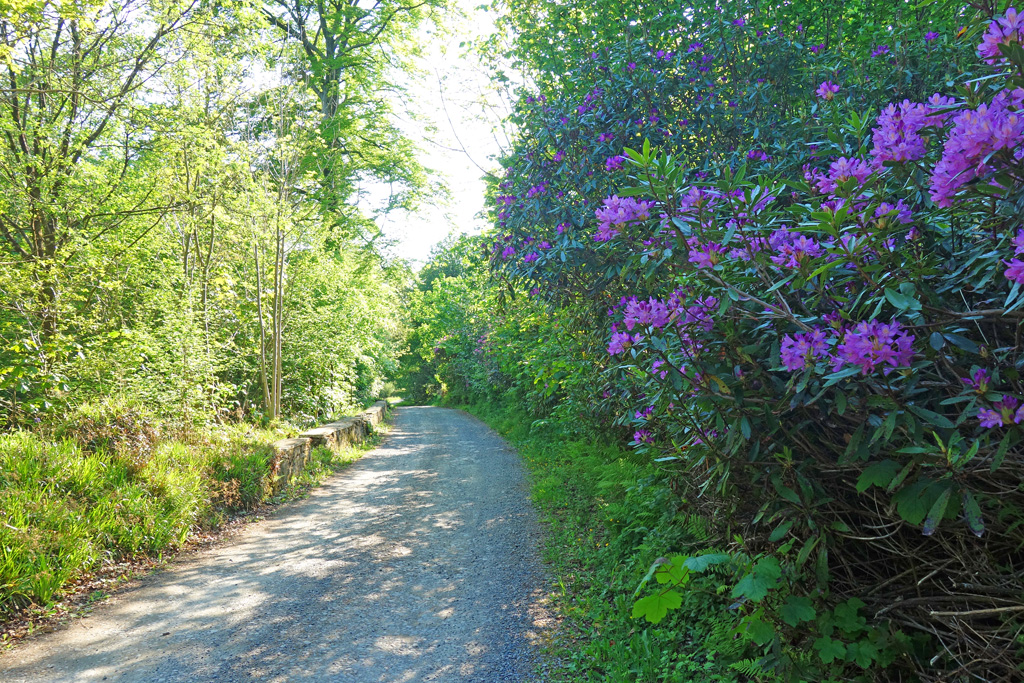 The Road With Purple Rhododendron Bushes 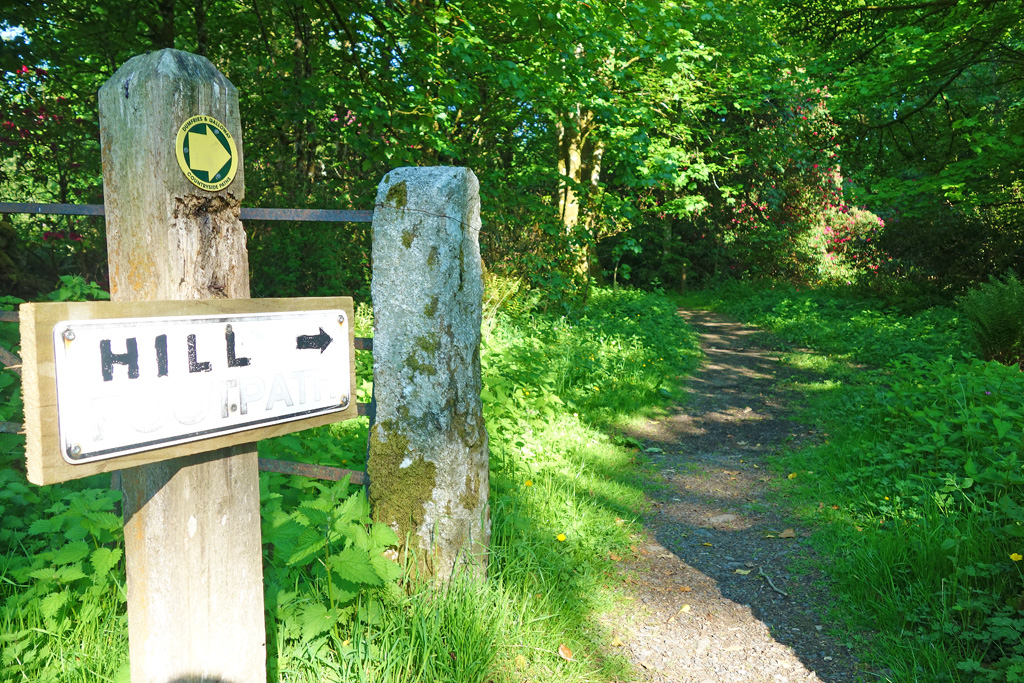 The Little Sign, Taking you off the Road and Into Deeper Woodland 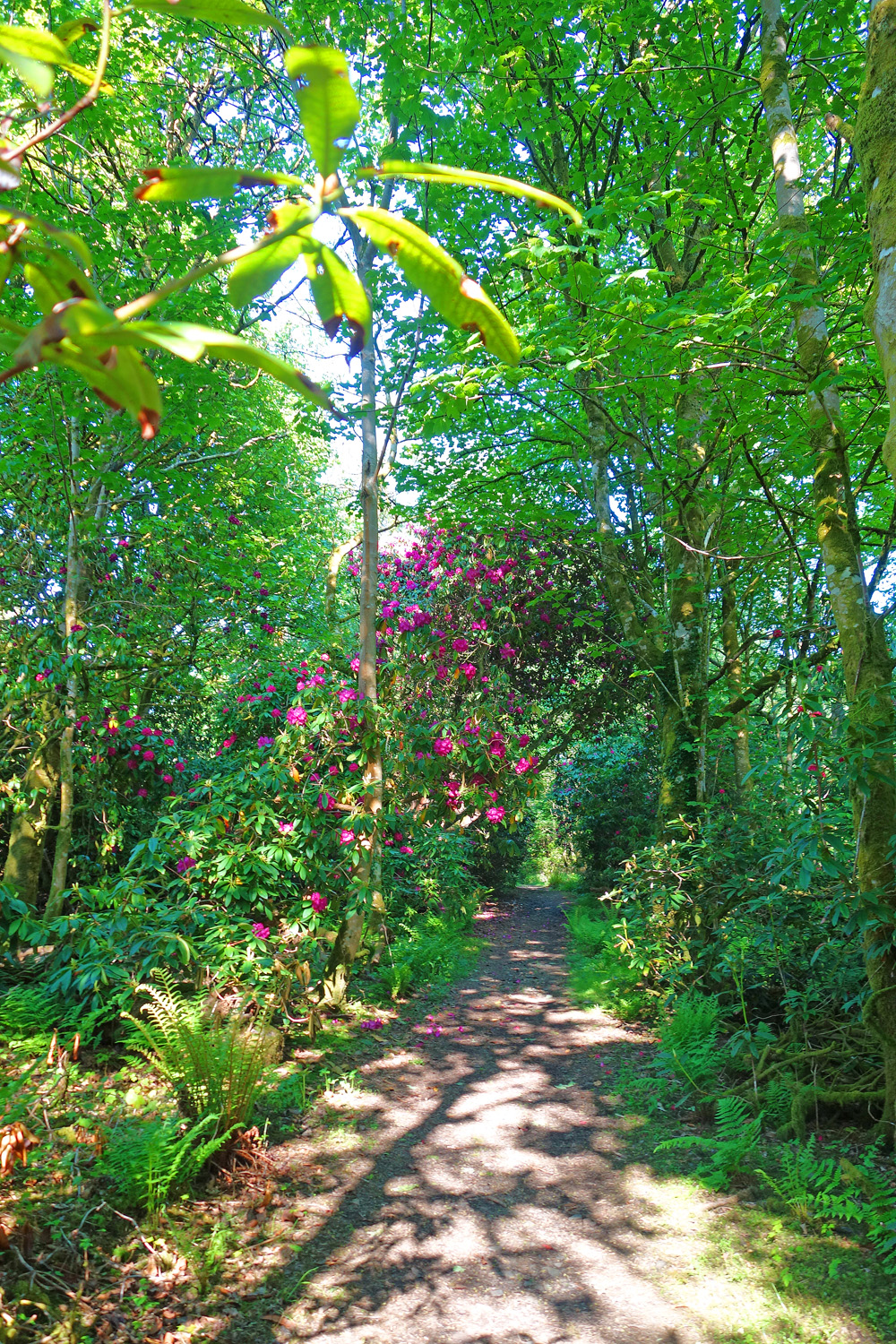 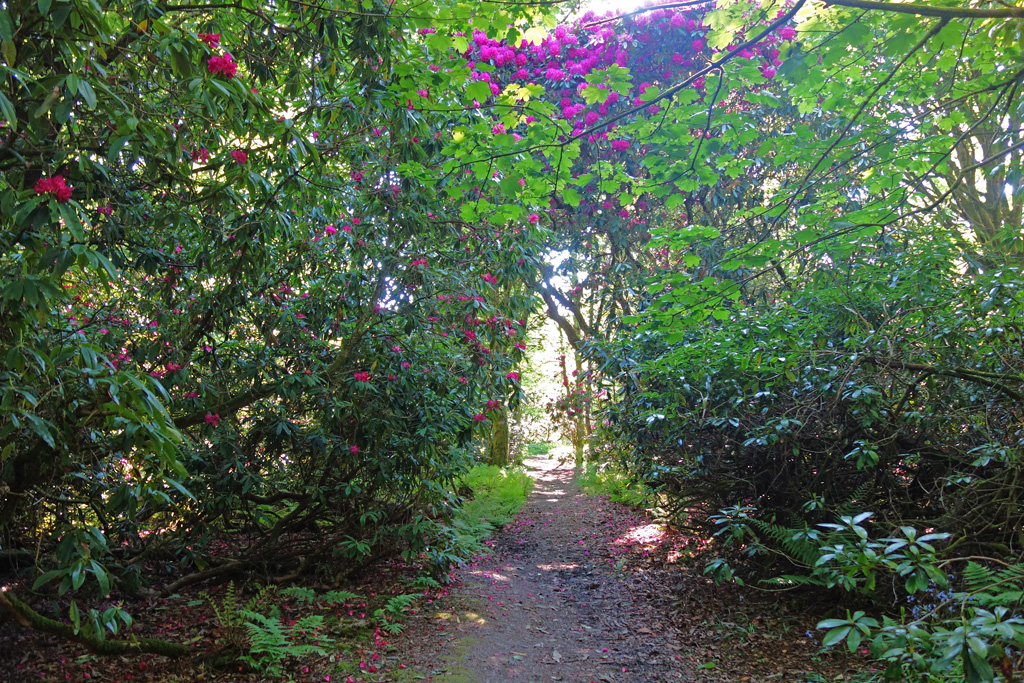 As I walked through the maze of colours I couldn’t help my mind wandering. It felt like I was walking through an exotic jungle somewhere. At any moment I felt like David Attenborough could stroll out of the bushes and discuss the wildlife with me.

I must also admit I also couldn’t forget the scene in the original Jurassic Park movie, where Robert Muldoon is hunting the Velociraptors and Ellie has to make a break for the maintenance building. (If you have any idea of what I’m talking about please feel free to let me know!)

The woodland suddenly ended and I was out on a small track in front of open sheep fields. A few pretty (and noisy) cock pheasants were roaming around as rabbits hopped through the herds of sheep. The track stops at the entrance to one of the fields and it is important to enter and head diagonally upwards through the field. 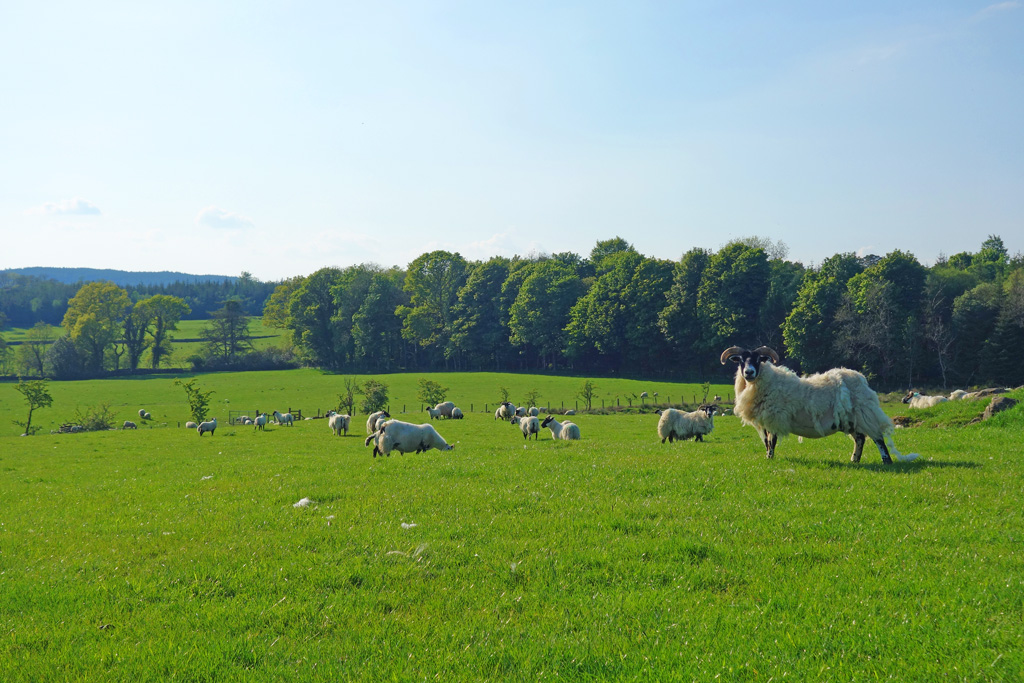 The Locals Enjoying the Sun 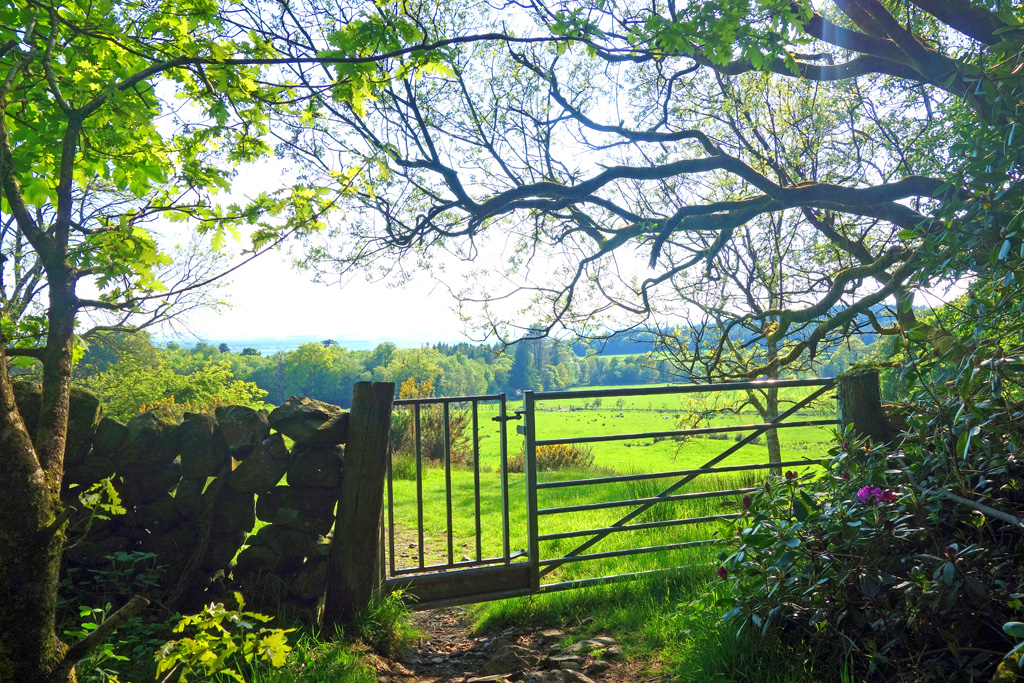 After stopping to enjoy the small, shaded field of bluebells I continued onward and was making good time. At this point things got a bit harder. The path (a cobbled path that takes you right to the summit) is far more open than before, climbing through pine woods as it gains altitude and the views just got better and better. My enemy at this point was the heat: despite being evening, the sun was still high in the sky and I was slowly being cooked.

Thankfully, I reached a wonderful little stone seat which was perfectly placed to take in the views. 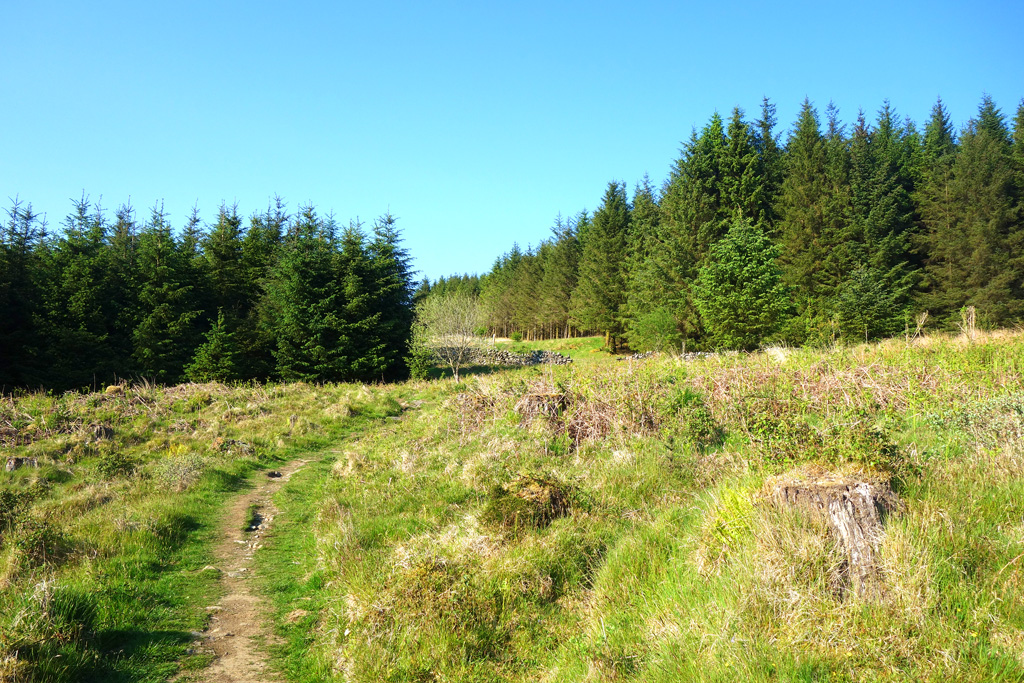 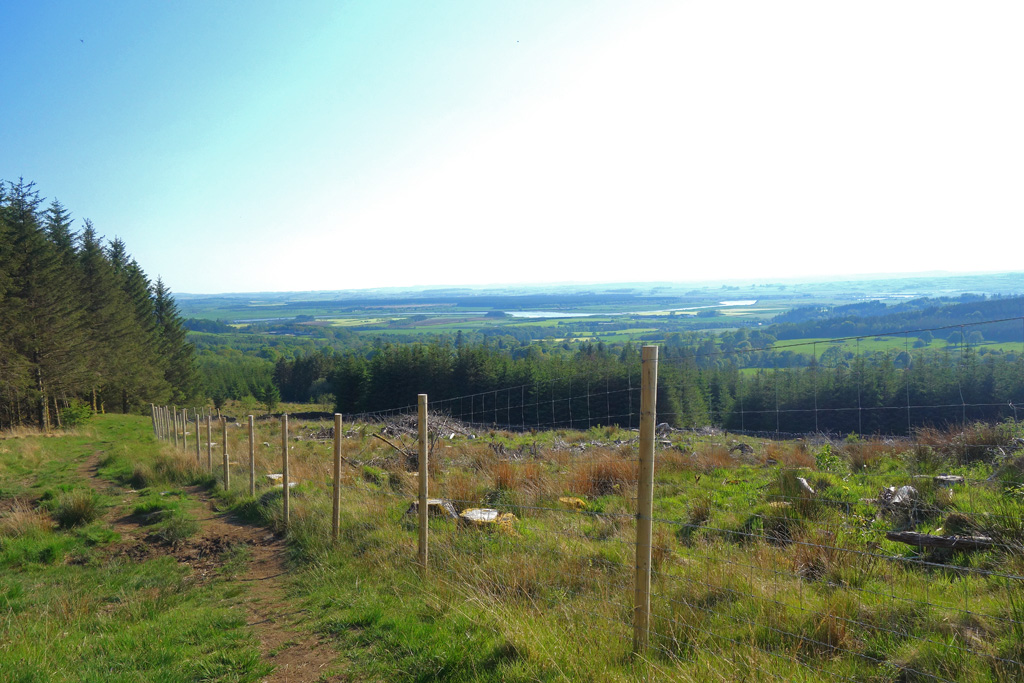 Looking Backwards Over the Cree Estuary 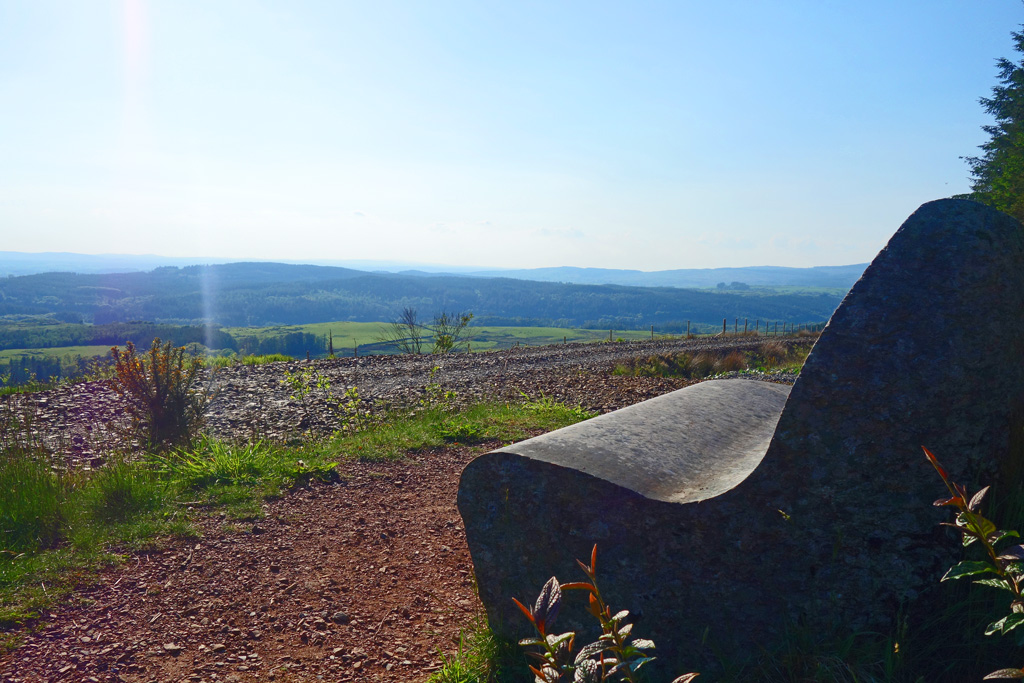 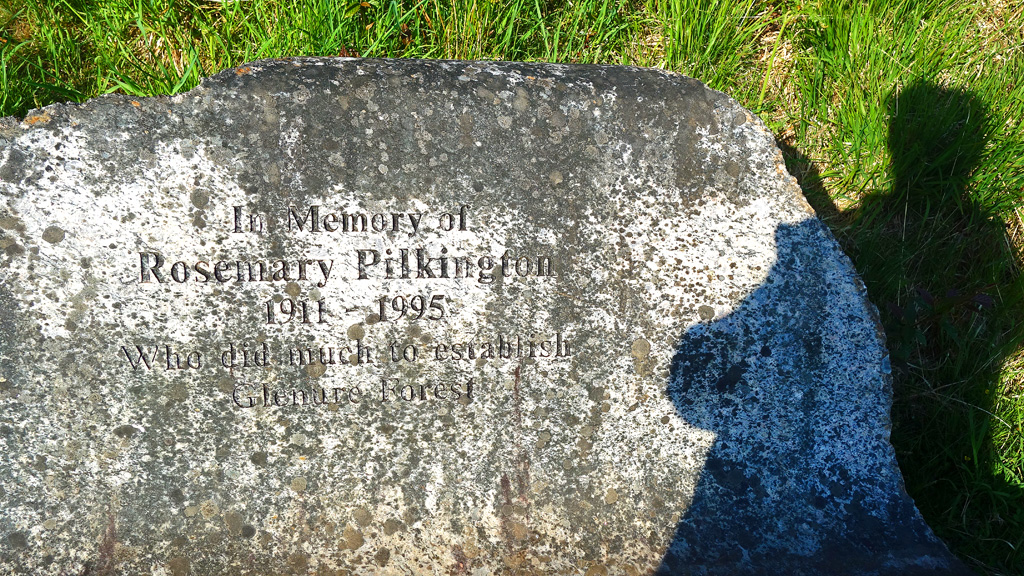 ‘Rosemary Pilkington who did much to establish Glenure Forest’

The stone seat is dedicated to a ‘Rosemary Pilkington’ and it really is situated in a wonderful spot. The views stretch for miles and on such a nice night it was perfectly placed for me to take a break and try to cool down.

It was around this point I realised I was making very good time and could afford to slow down. I only had to climb up through this last section of woodland and I’d be on the moors above and facing the final push to the summit. 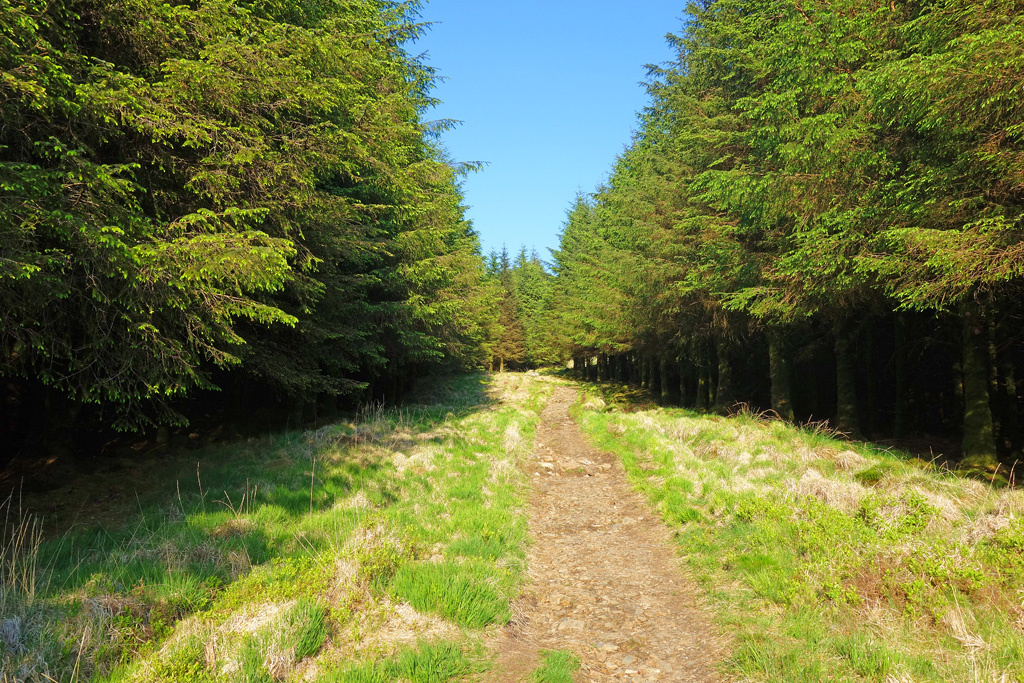 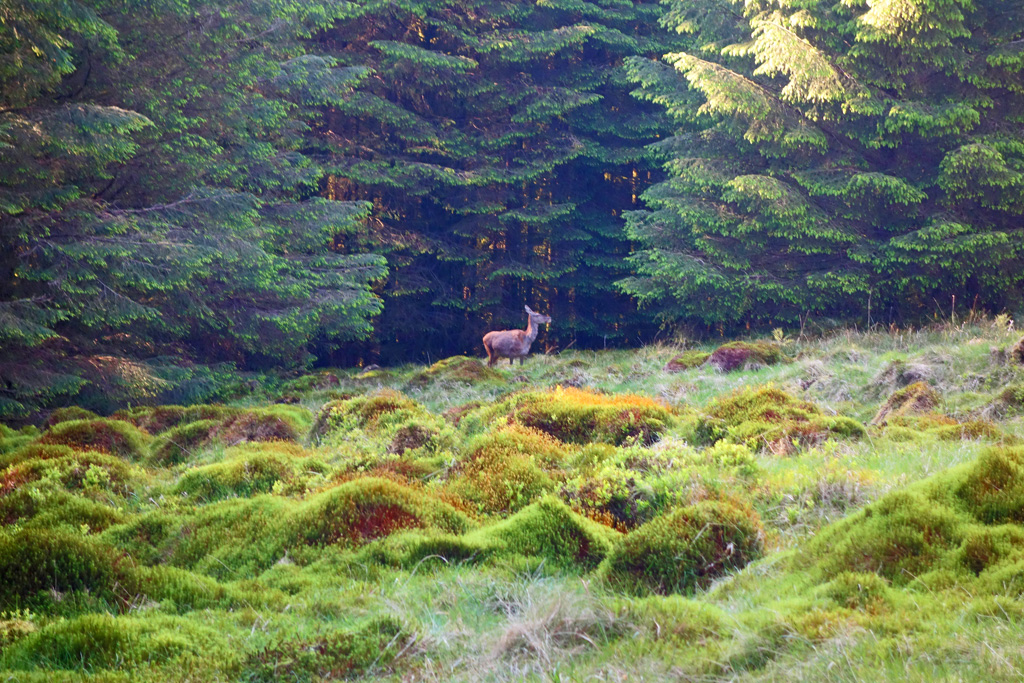 Red Deer in the Forest 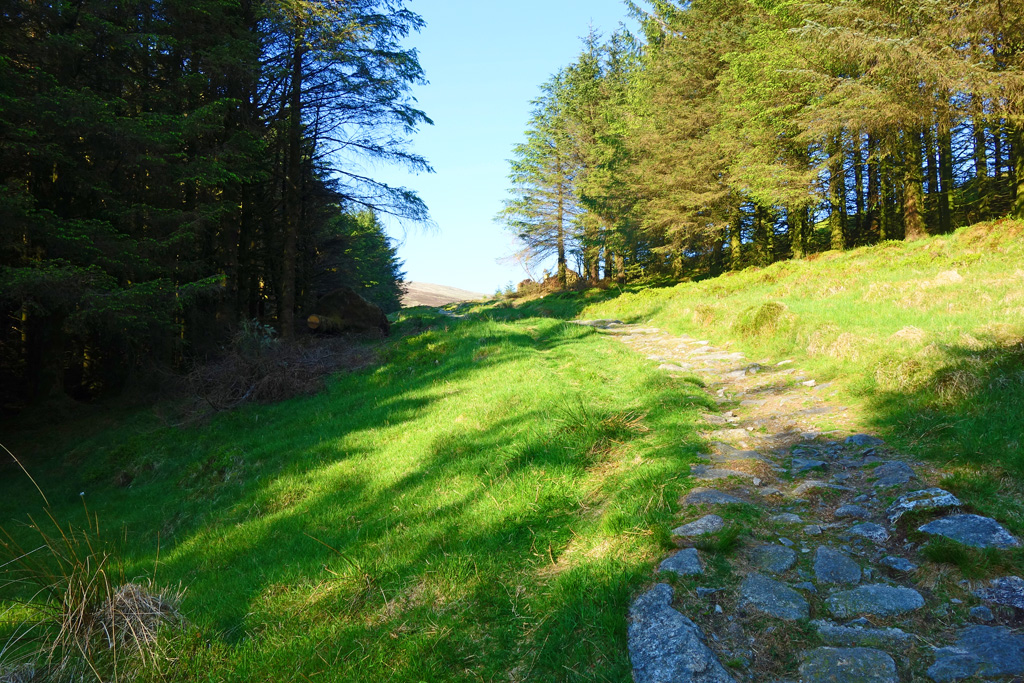 Just About to Exit to the Moorland

Things were becoming wonderfully atmospheric. A lone red deer had strolled out of the treeline, casually observing me as I took a picture and continued on my way. Two cuckoo’s were having a calling competition somewhere in the trees as I walked along the deserted path.

It wasn’t much longer before I left the woods and saw my target for the night. 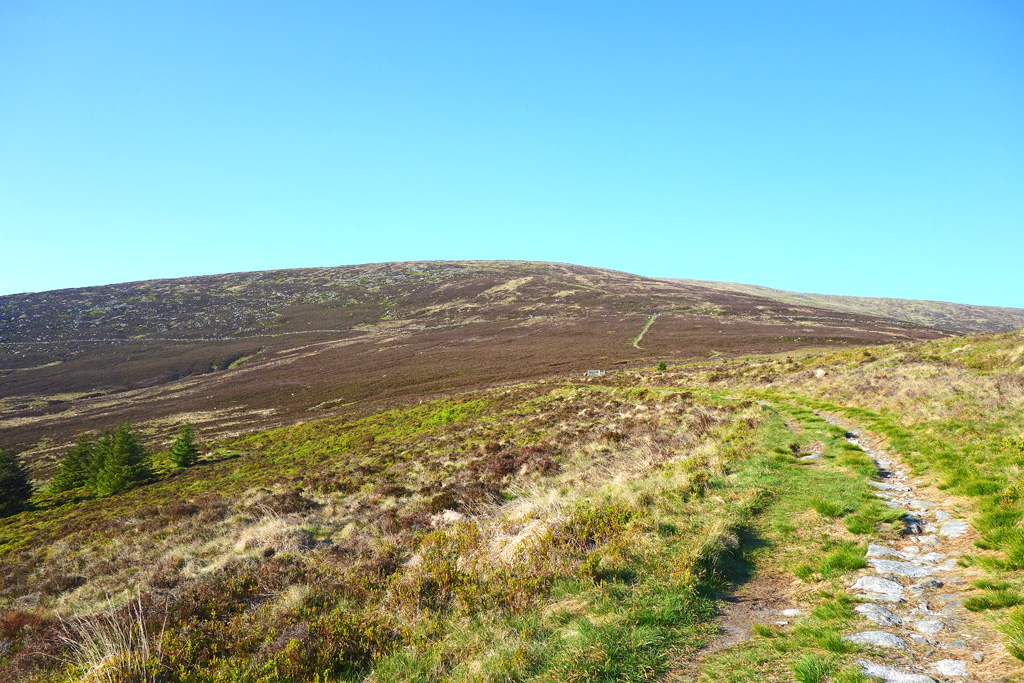 Cairnsmore of Fleet Comes Into View

With the sun still high in the sky I had arrived at the base of Cairnsmore of Fleet! The clear track passes through a small gate a twists up along the east side of the hill. Having plenty of time I took plenty of pictures and took even more rest stops (there are a great many rocks and boulders at the edges of the path which are perfect for a seat).

To my surprise I looked back and saw a lone cyclist coming up behind me, probably to enjoy a quiet ride to the summit on a peaceful summer night. He overtook me and made it to the summit, before turning around and heading back: I was glad I’d have the summit all to myself for the sunset I’d been so looking forward to. 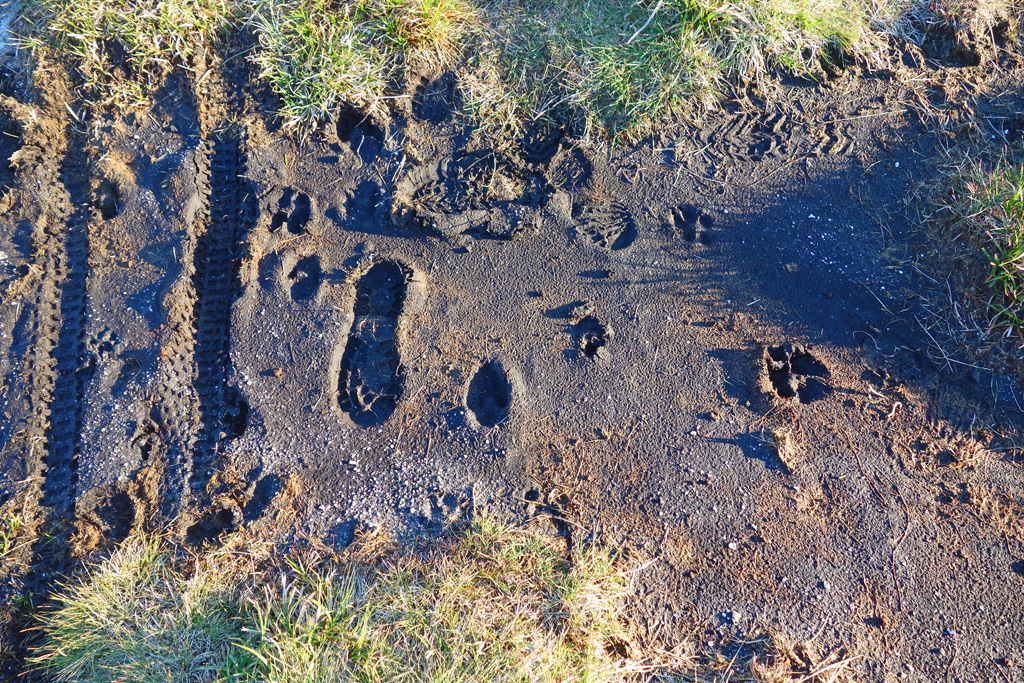 Tracks, Boots and Paws: Quite the Selection of Visitors! 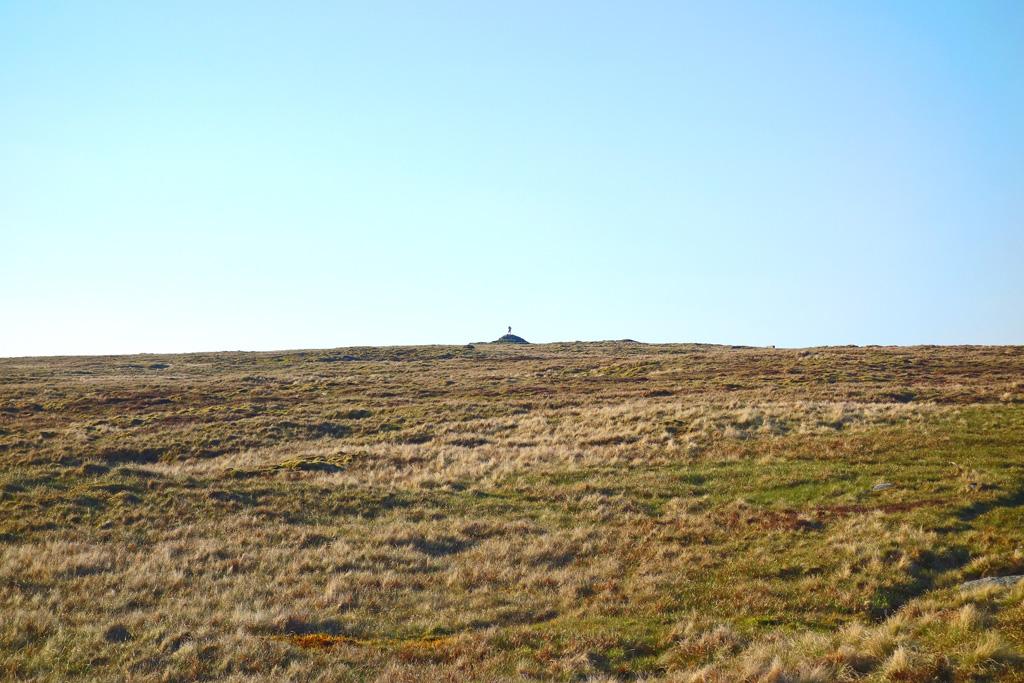 The Cyclist at the Shelter Cairn 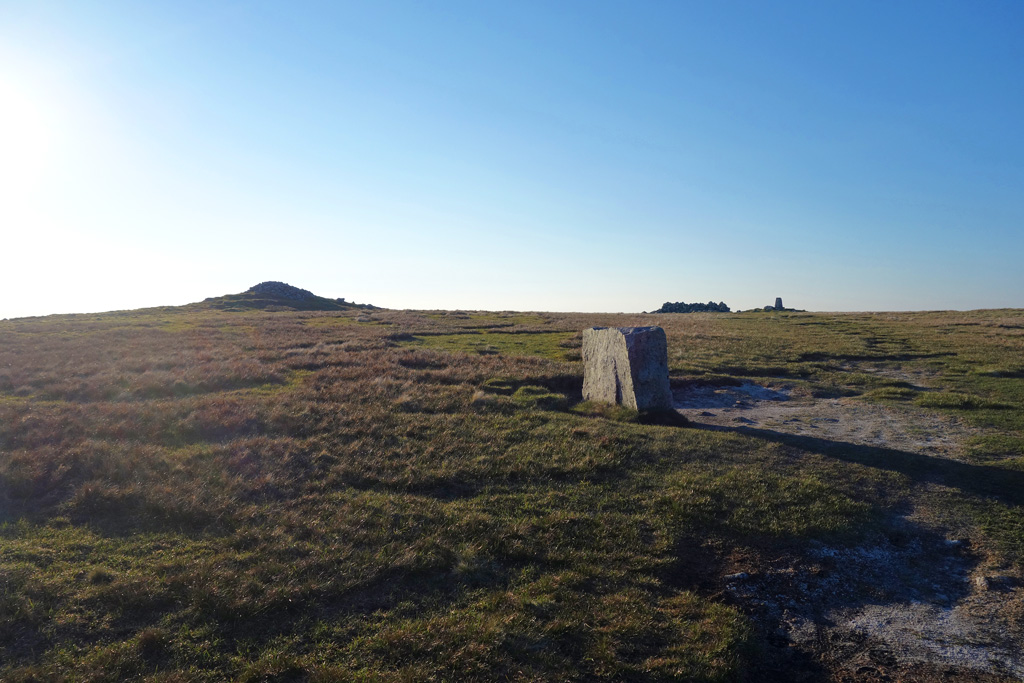 The Summit With Trig Cairn, Shelter Cairn, Ruin and the Memorial

Air Disasters on Cairnsmore of Fleet 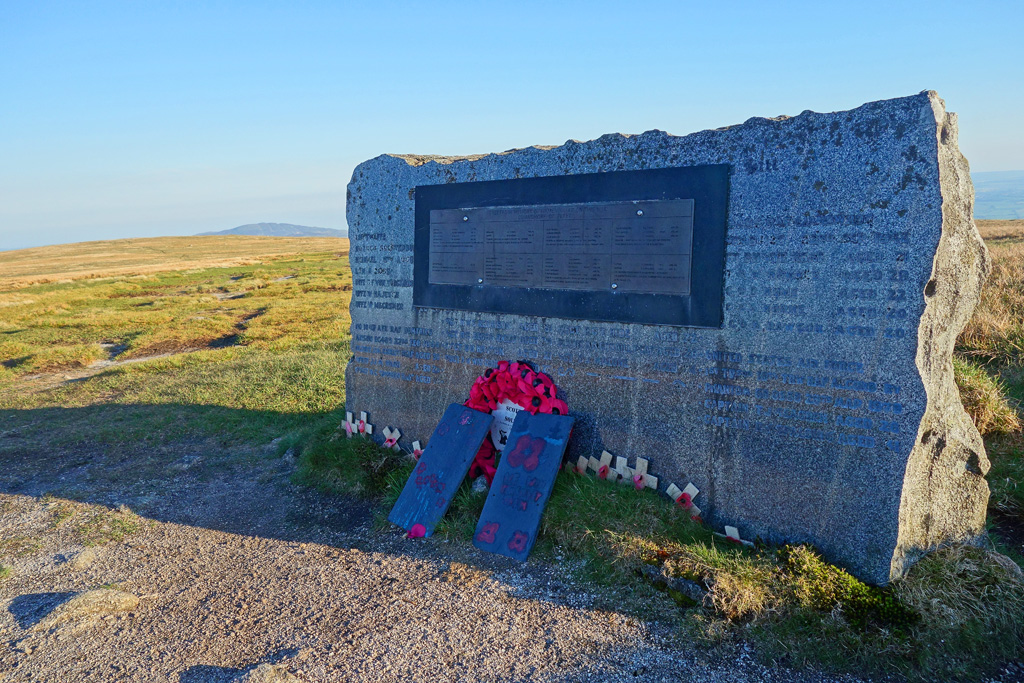 As you may have noticed at the start of this blog post, I referenced the tragic history of Cairnsmore of Fleet. By that, I meant the 4 aircraft that have crashed on the hill, accounting for the deaths of 25 men.

Of these crashes, 3 occurred during the Second World War with one being a German aircraft (a Heinkel 111, based in Holland) with the most recent crash occurring in 1979. Most of the names were of young men in their 20’s however the one that stood out to me most was of Flight Sergeant M.C Simpson, based at R.A.F Dumfries, he died on the hill on the 22nd of February 1944 at the age of just 19.

I was struck with a deep sense of perspective. Here I was, excitedly looking forward to filming a sunset for my blog, when a 19 year old teenager had never returned from this hill. 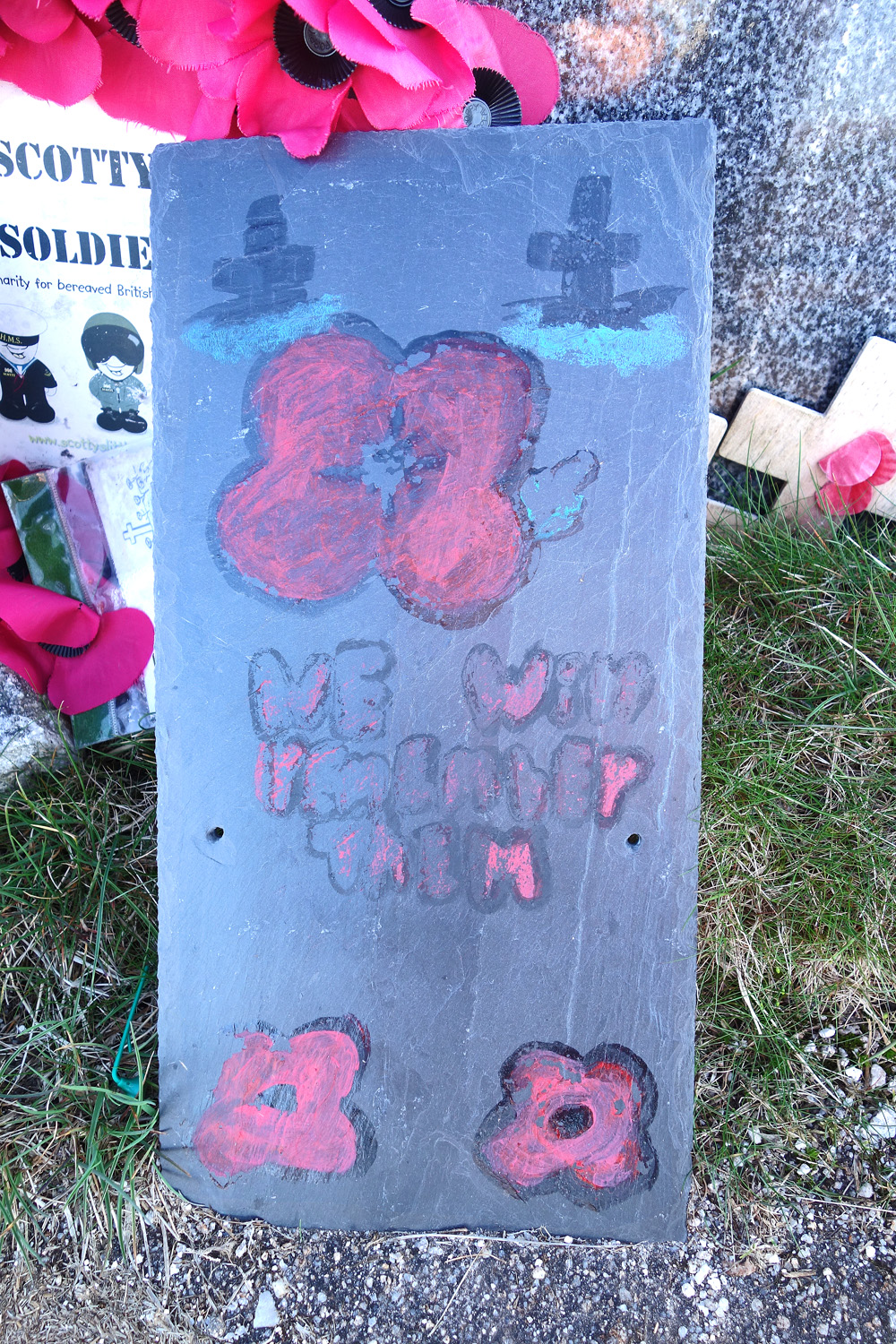 ‘We Will Remember Them’

It was around 20:15pm at this point and sunset wasn’t due in Dumfries & Galloway until about 21:40. I’d planned on beginning to film the sunset around about 21:10 in order to have a full half hour of watching the sun fall into the sea in the west.

Having just under an hour to burn was no problem. I was at 2,333ft at yet there was only a gentle breeze blowing on the summit, the sun was still warm on my skin and there wasn’t a human in sight. It was desolate, it was quiet and it was beautiful.

I roamed around the summit, gazing for miles in all directions and taking a lot of pictures.

Then, I set up my equipment, sat down and just took it all in. 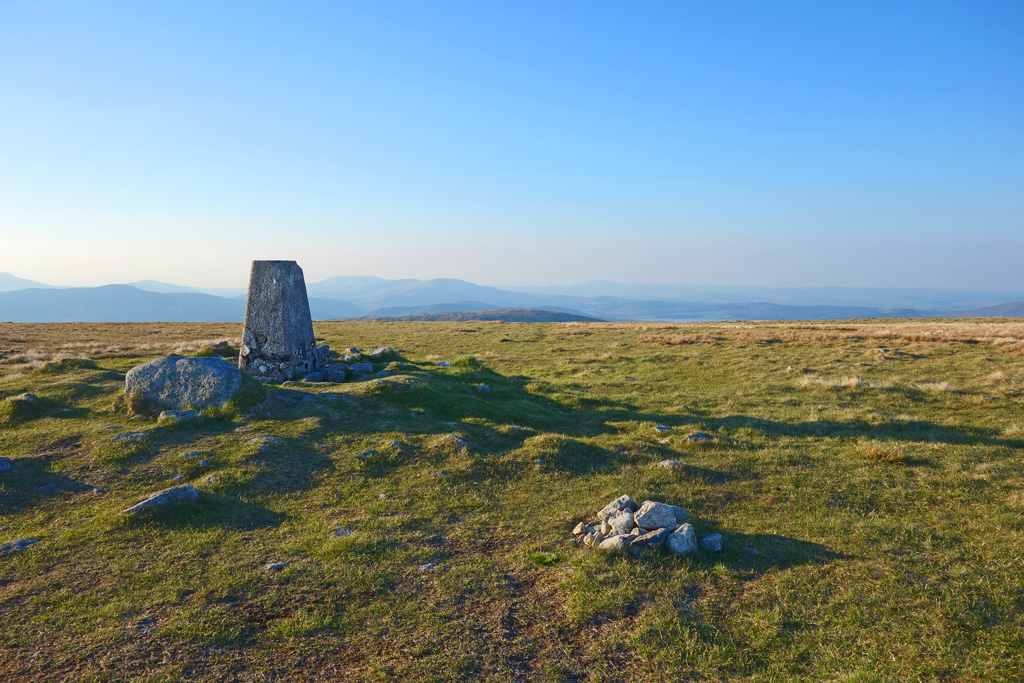 The Views to the North West 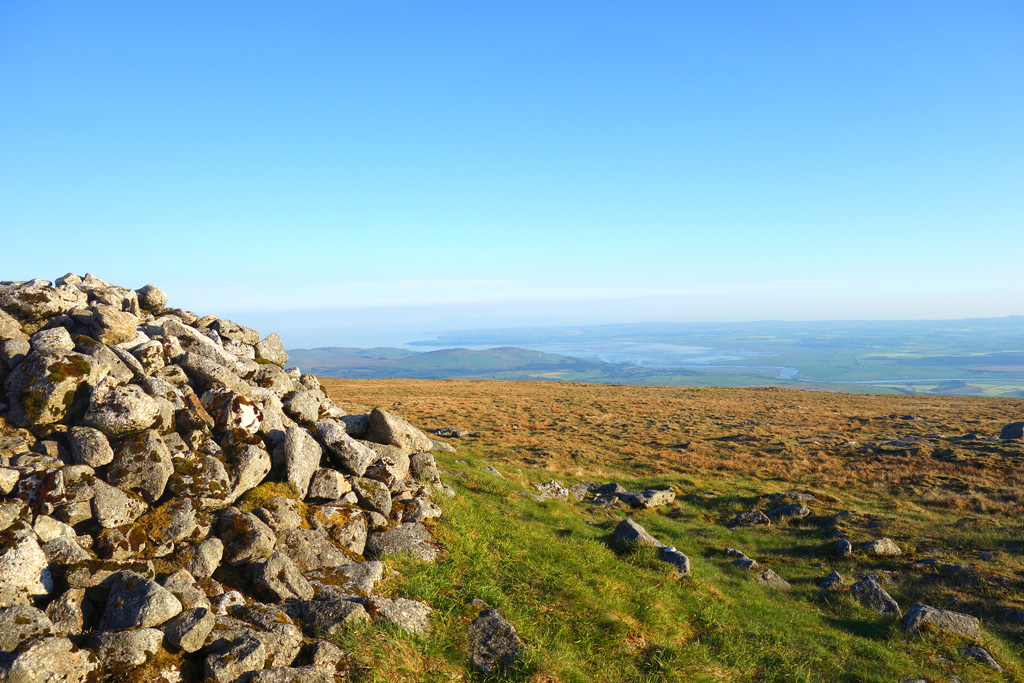 The Views South over Wigtown Bay and the Isle of Man

The Views to the East

The Sun Setting Over the Cairns 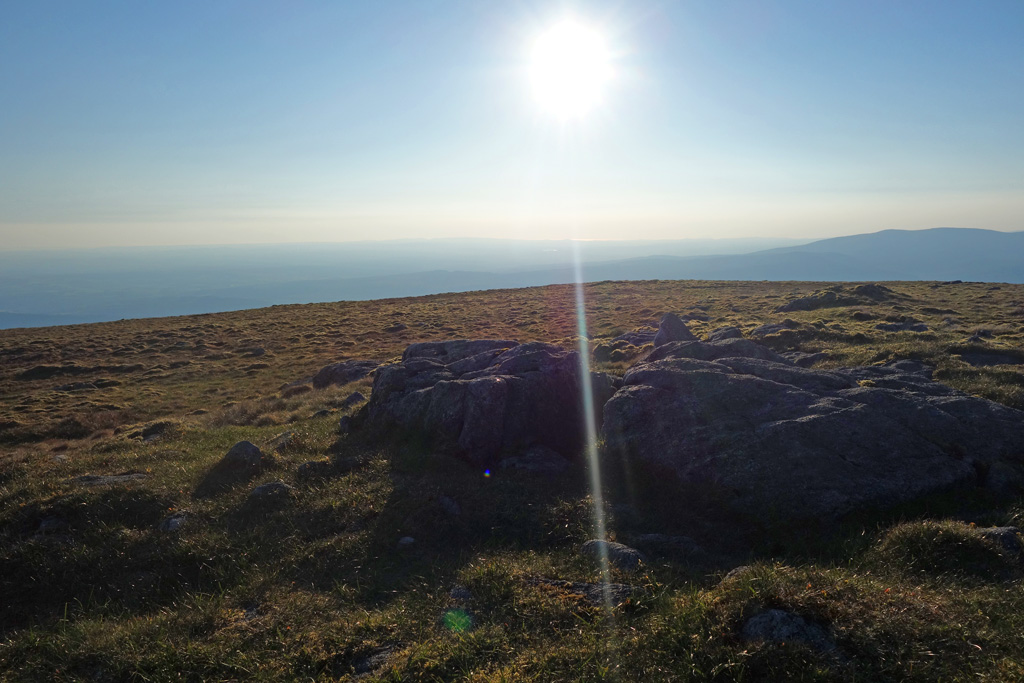 My Seat for the Main Event

Watch The Sunset With Me

Feeling awed and slightly giddy, I packed up my things, took one last stroll around the summit and headed home in the dusk light. The wonderful pinky/orange glow basked the moors and made the walk down from the summit a surreal experience. The silence only added to it.

In the distance I saw Creetown light up, as the streetlights came on and the faint lights from the houses were visible. It was very picturesque.

I’d also planned ahead and brought a torch with me for the descent through the woods. By the time I reached the sheep fields I had walked through earlier it was almost pitch dark: which made the final leg back through the dense, flowered woodland amusingly creepy! (It’s amazing how the presence or absence of light can totally transform a place).

When I reached my car I was removing my boots in complete darkness. Still I was reflecting on that sunset, on the colours and the beautiful tranquillity I’d felt on the summit.

It’s something I will never forget and something I fully intend to do again. Perhaps on a Scottish island in a future post.

If you ever get the chance to do something like this, do it. 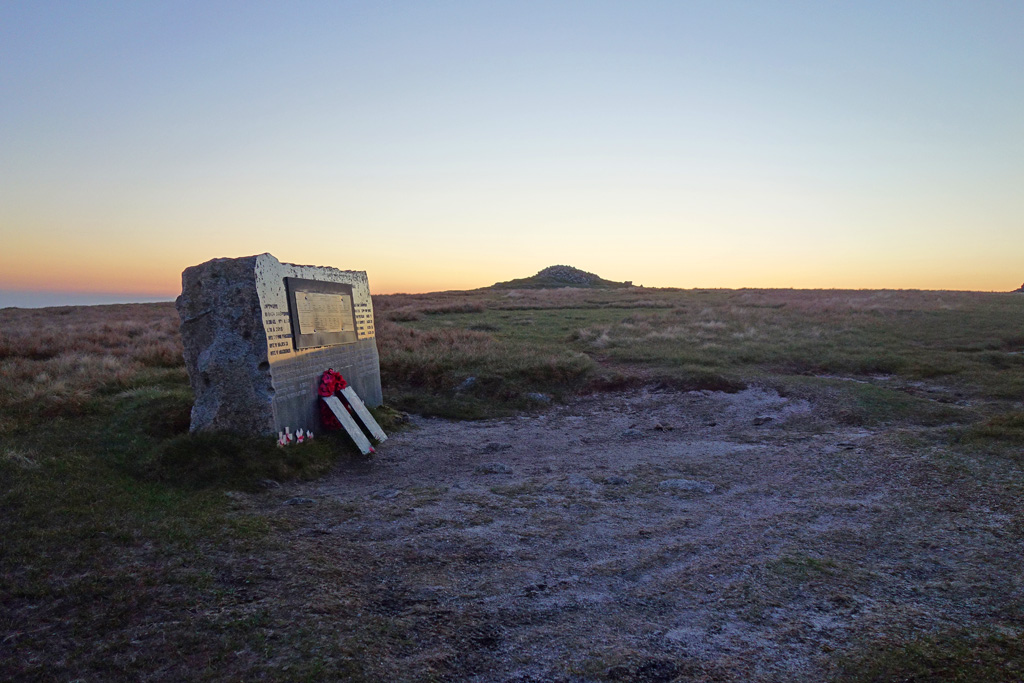 The Memorial at Dusk 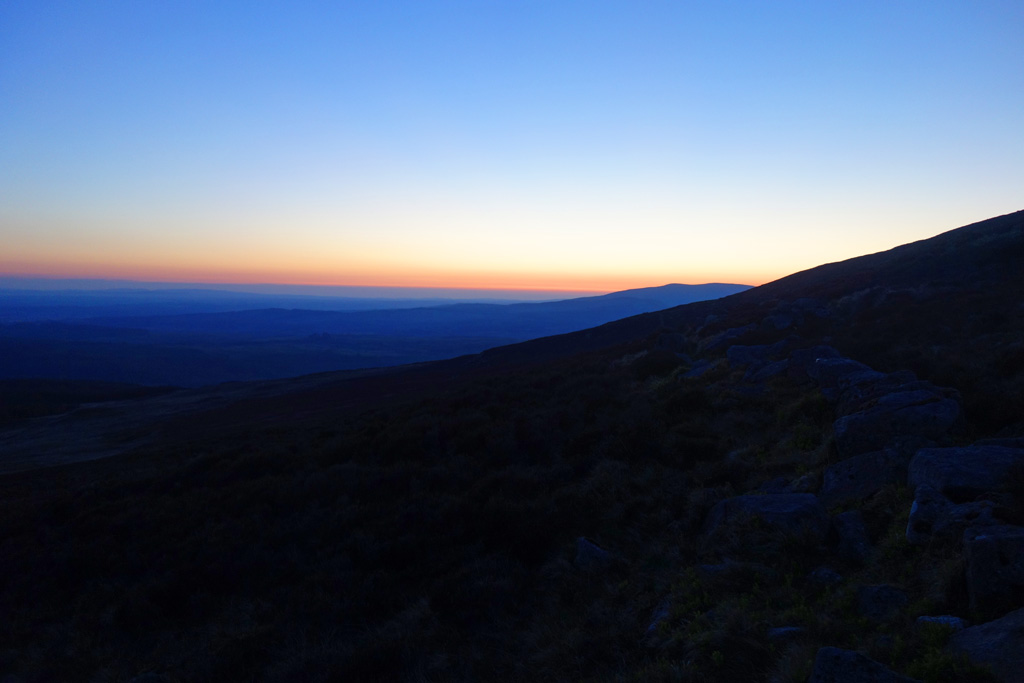 Heading Home at Dusk: The Colours Were Amazing