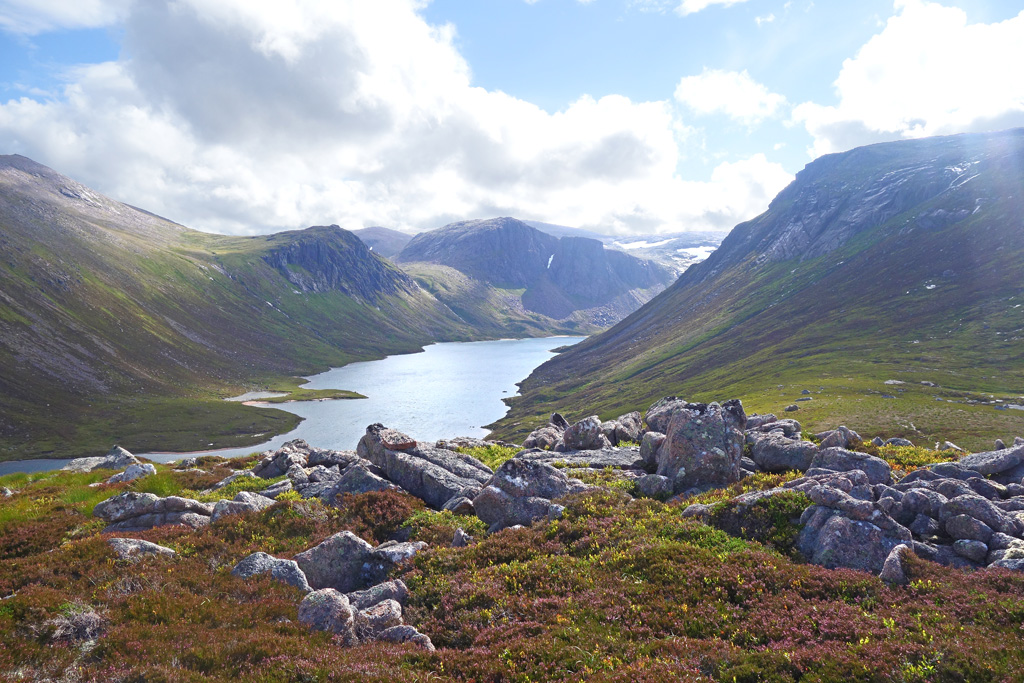 One of the places I have wanted to visit most in Scotland is Loch A’an (or Loch Avon) in the Cairngorms, a sprawling loch nestled in the crags below Ben Macdui and Cairngorm. These two peaks are the 2nd and 6th highest mountains in Scotland and I’d always known that this spectacular setting would make for a fantastic wild fishing trip. Containing wild brown trout and arctic charr (which I have never caught) and being the source of the River Avon, a fantastic salmon river, Loch A’an had always been a special place in my mind to one day fish.

Loch A’an is oriented southwest-northeast and is bounded on three sides by precipitous mountains, cliffs and crags…

The ending of travel restrictions due to Covid-19 saw a plan take shape. Take my wild fishing gear, a tent and cross my fingers that the weather would be as good as the Met Office had promised and head out to fish one of my bucket-list lochs.

Did I meantion the 3,580ft Munro I would be bagging in the process?

It seemed silly to just go fishing when there are so many spectacular Munro’s in this area so the plan, naturally, evolved into heading off from the Glenmore Lodge Road car park just south-east of Aviemore. From here, the track would take me to Bynack More, a 3,580ft Munro, then I’d continue south to Loch A’an. Here, the tent would be pitched and fishing would hopefully commence.

The circular route ended up being about 24 miles all-in and definitely requires an overnight stay unless you are super-fit and are willing to dedicate a full day to it!

In order to fish the loch, I’d definitely suggest an overnight stay. 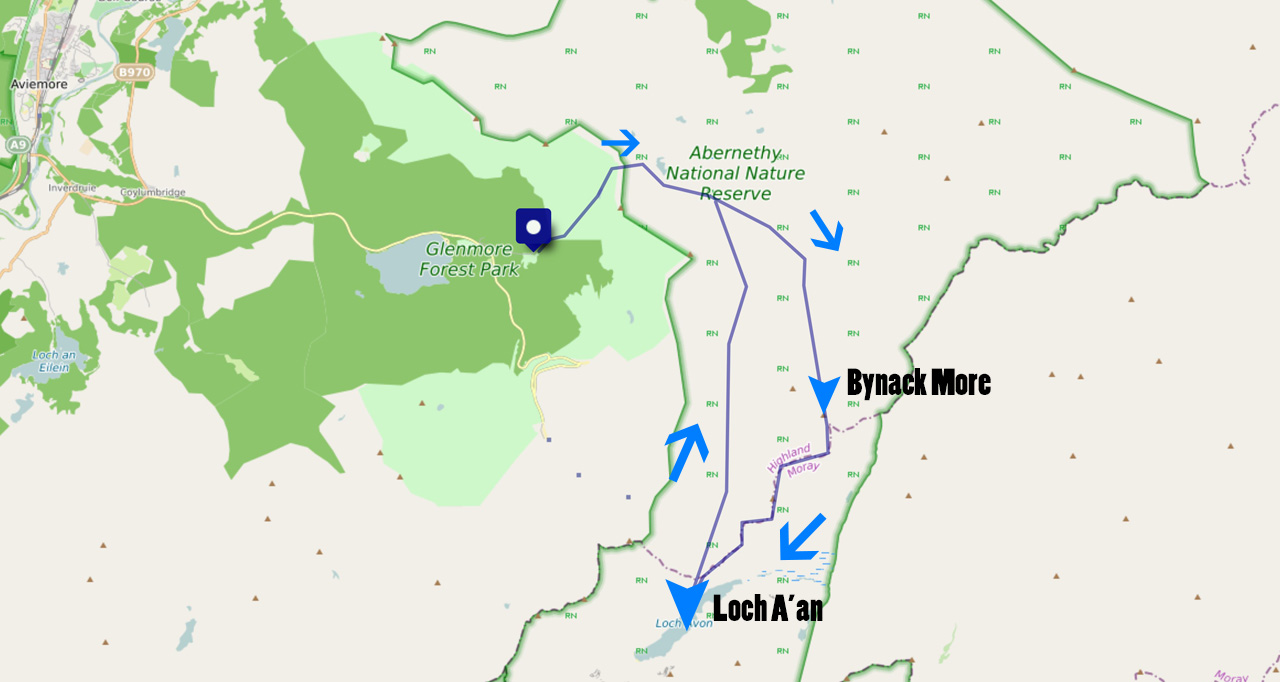 Map of the Route (From www.openstreetmap.org)

From the busy Glenmore Lodge car park, the track twists through beautiful woodland (keep your eyes sharp for red squirrels) and past the pretty little loch ‘An Lochan Uaine’.

Following the well-trodden Braemar track, the walking was easy and the views were very pretty. Eventually, the track comes to the small bridge (that would be a welcome sight on day 2!) over the River Nethy that is the split point of the walk. The track either goes upwards to Bynack More or deeper into the glen. 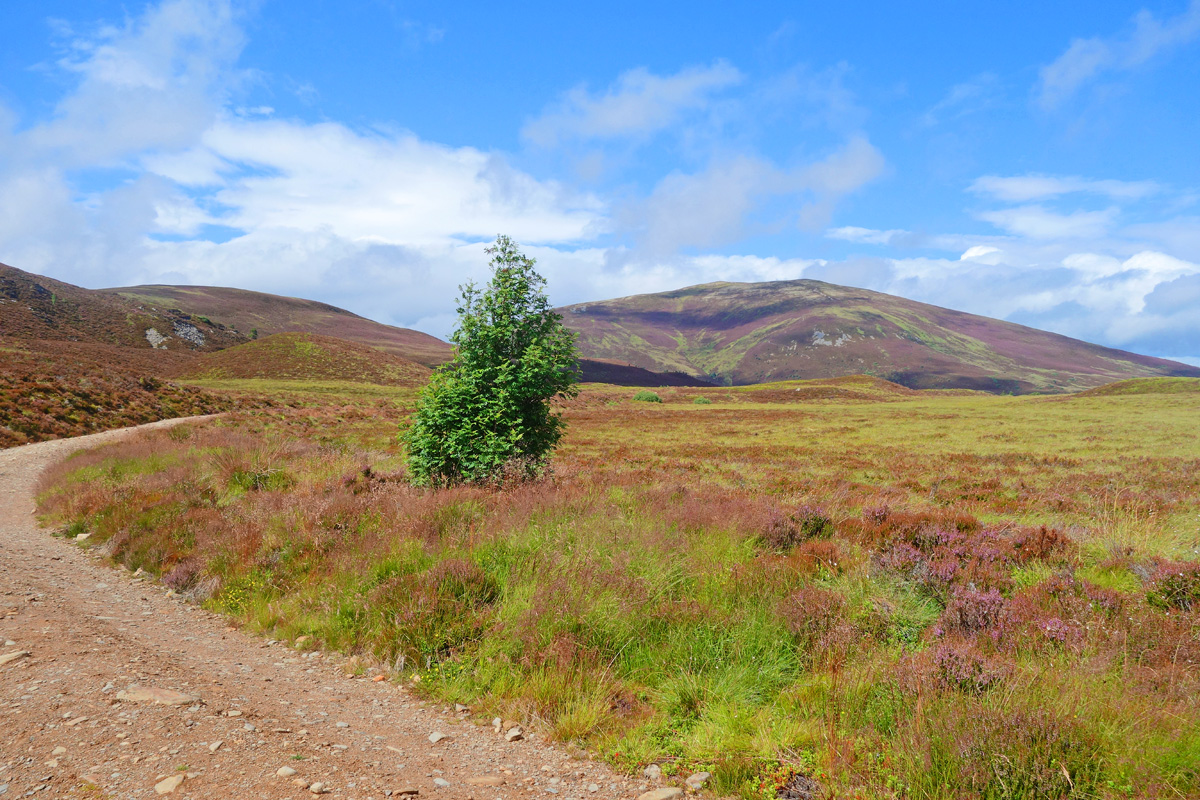 Looking Back to Meall a Bhuachaille 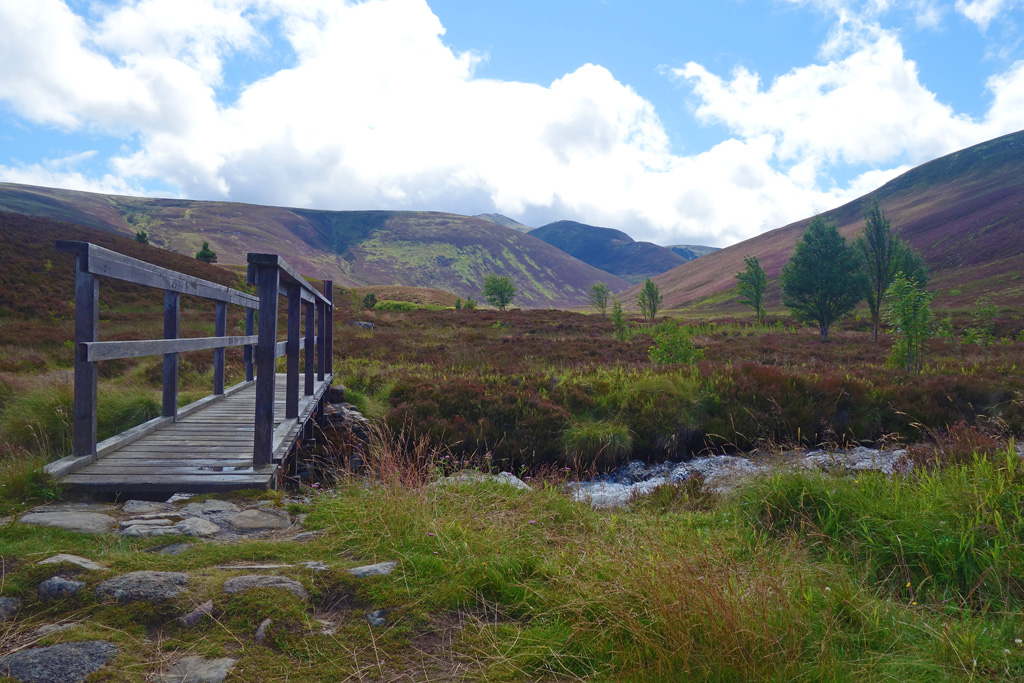 The Bridge Over the River Nethy

The Beautiful Return Glen on the 2nd Day

On this day, it was upwards. Although I spent a wee while stopping and looking down that beautiful glen. I knew I’d be walking back along it the following day, heading back towards the little bridge. It looked beautiful.

It was also easier to look at the pretty glen than it was to tackle the 3,580ft Munro that was looming to my side. 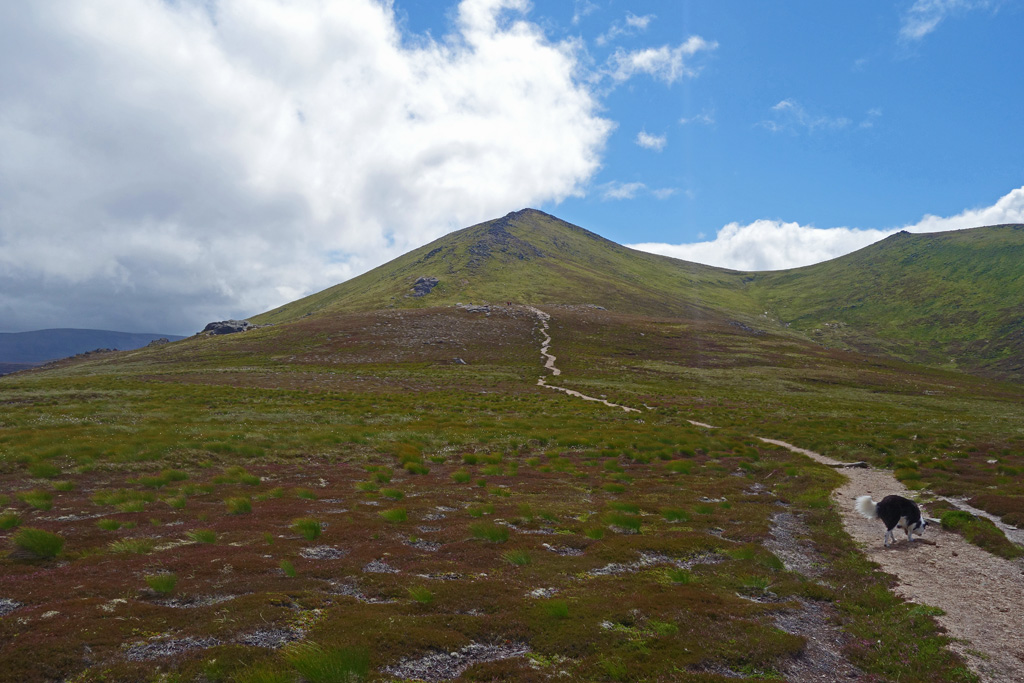 One thing I will say in Bynack More’s favour is that the track is easy to follow all the way to the summit. There were quite a few people intent on bagging the peak and the route was obvious. What was also apparent was that this was my first proper mountain in months due to Covid-19 and, with the weight of my heavy pack, frequent breaks were needed! 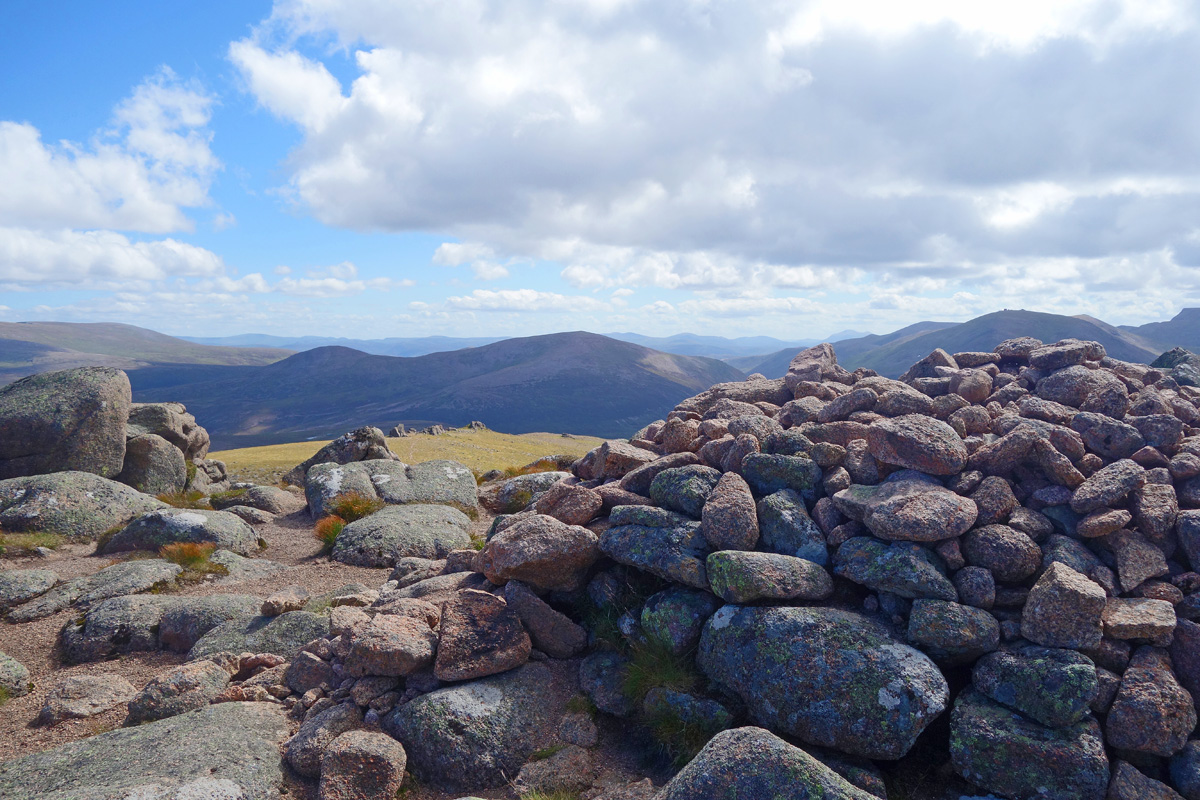 The Summit Cairn of Bynack More

Once on the summit, after a needed break, I took in the spectacular views and noticed the incredible rock formations. Huge, ancient rocks stand just below the summit and make for a fascinating feature of this Munro. Walkers were having a look and posing for pictures against the geological marvels. 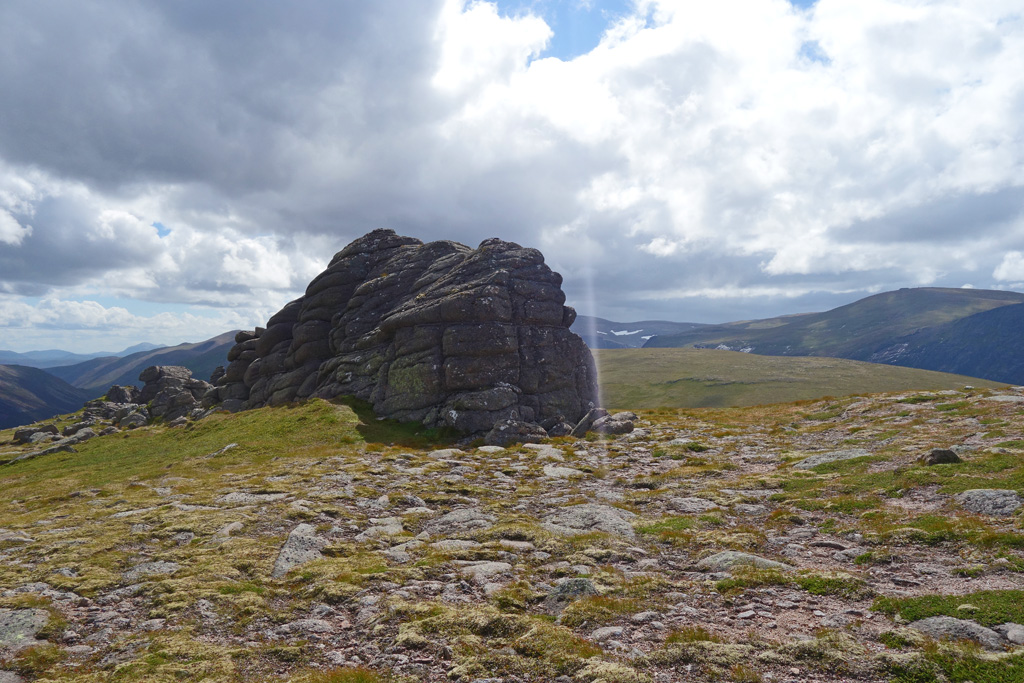 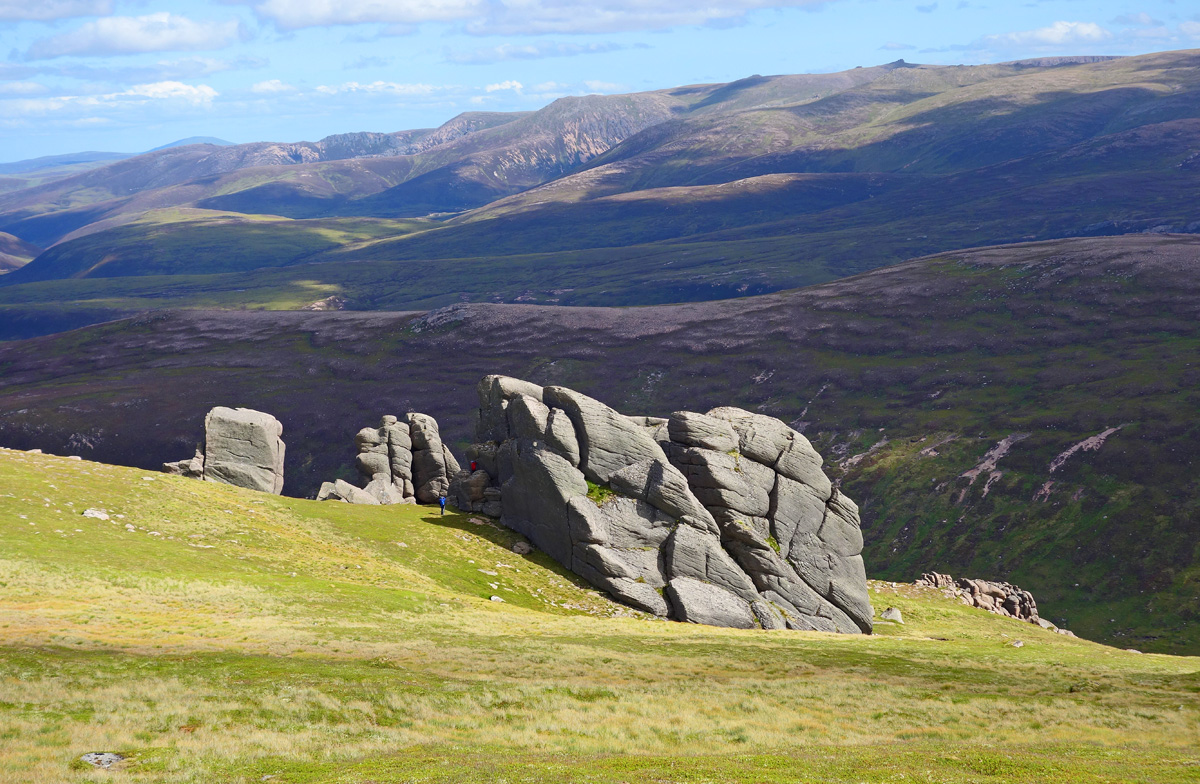 With People For Scale!

It was at this point, as I headed beyond the stones and out towards Loch A’an I noticed that…everyone else was turning back. As I descended towards the sub-summit of A’ Choinneach I knew I’d hit that point of no return and my next stop would be the loch.

There was no turning back!

The walk to the loch was deceptively taxing. The track vanished and it was a walk over peaty, boggy moorland. Descent somehow became ascent again as A’ Choinneach needed to be conquered. By this point my pack was feeling heavy and I was looking forward to seeing this fabled loch and having a rest. 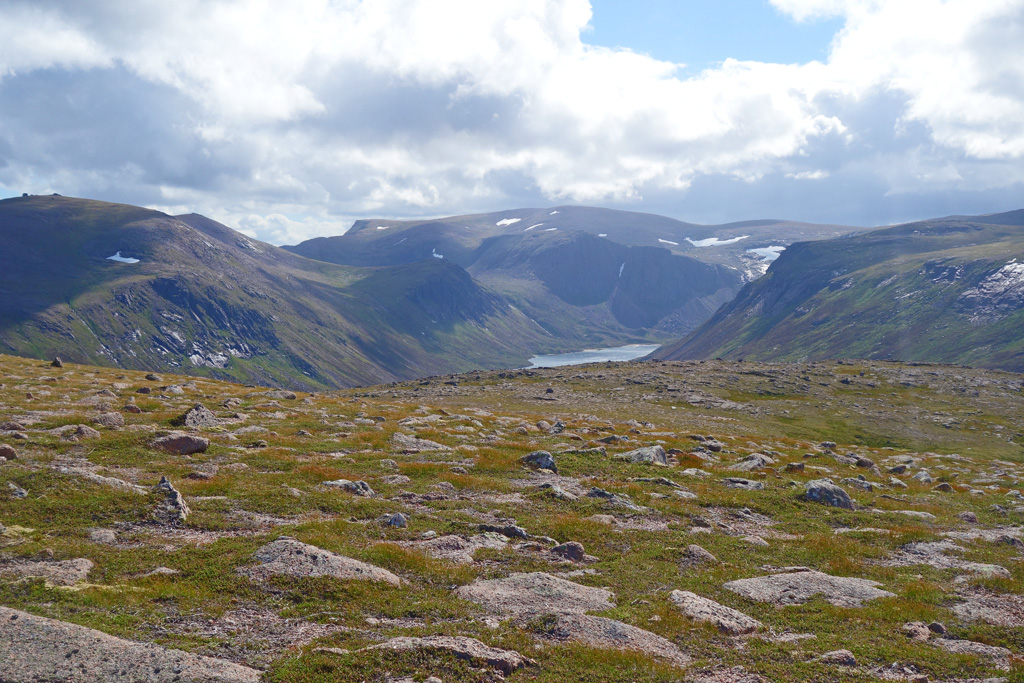 The First Glimpse of Loch A’an

Finally, Loch A’an came into view and I got a second wind. I’d read about the loch for years. Nestled in a spectacular glen, surrouned by some of the largest Munro’s…but seeing it for real, in that environment…it was spectacular.

One of the Most Beautiful Places I’ve Ever Been 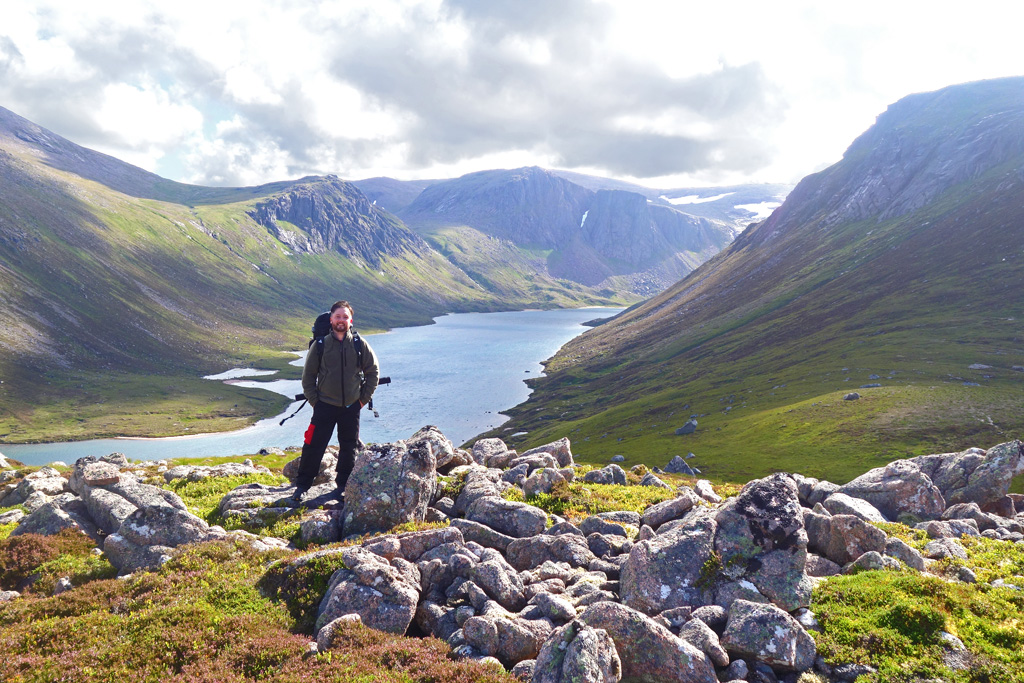 Loch A’an was deepl blue, grey and turqoiuse in different areas. Cragged cliff faces surrounded the western side and small sandy beaches and each end bookened the loch. It was like something out of Lord of the Rings, or Game of Thrones or whatever fantasy setting you prefer!

“One of the Most Beautiful Pleaces I’ve Ever Been” 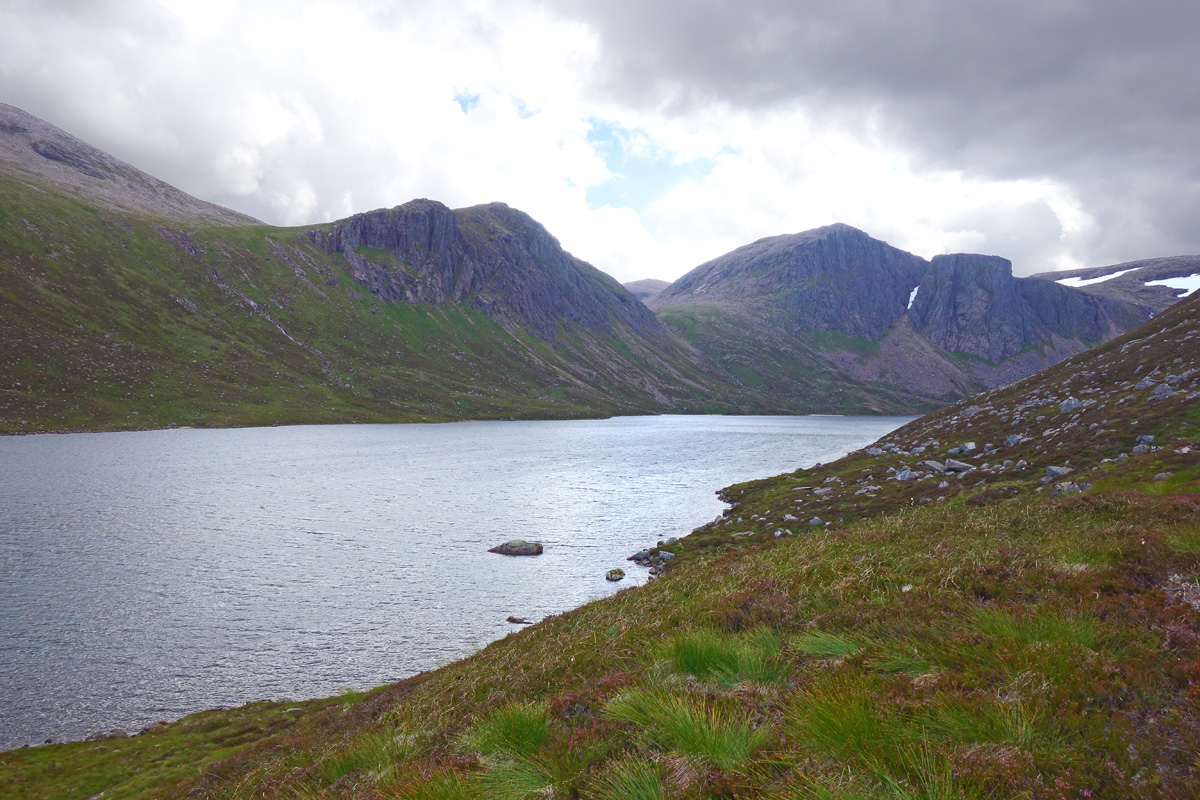 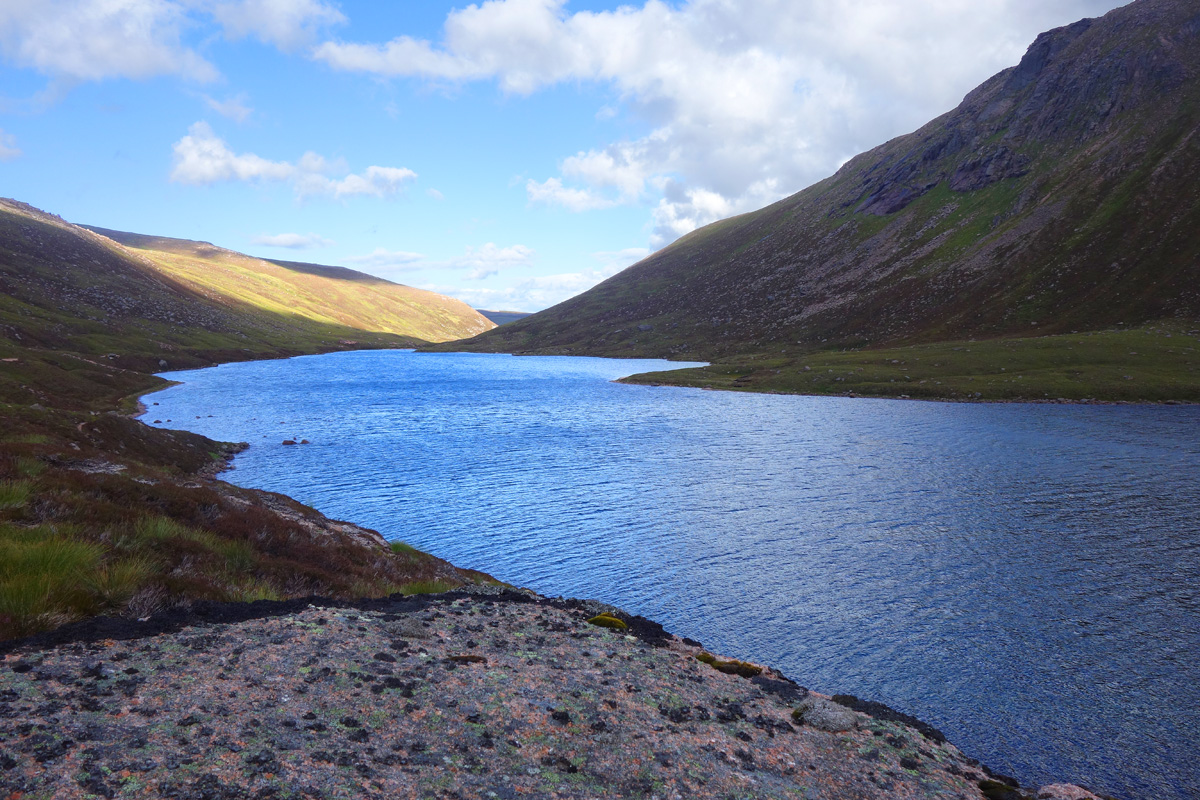 I think I glided down to the loch. I couldn’t get to it quick enough. Dreams of brown trout and arctic charr were splashing through my mind and I was eager to fish the loch. No, not eager.

After a wee struggle with the tent I became concerned. The wind was picking up and was driving down the glen. I had my rod set up and found casting an impossibility.

Then the rain started.

I left the rod set up out side the tent as I sought shelter. “They said it was to be nice, tomorrow was to be better. Surely it will ease up? At least in the morning it will definitely be better” I thought to myself as I heard the rain battering the tent and the wind rippling the fabric. I dismantled my rod and waited.

Throughout the night I was genuinley concerened about the integrity of the tent. Violent gusts battered the tent and didn’t ease up. If I managed a wink of sleep it was fleeting. Before I knew it, morning had arrived. The rain was heavy.

From 6am until 10am I sat, peaking through the zip at the rain. The wind blowing across the water. It was July, this wasn’t the plan and it wasn’t what had been forecasted. I knew I had a long walk ahead, I was tired and I had to admit defeat.

I wouldn’t get to fish Loch A’an on this trip. The walk home was in endless rain, the pretty glen I was looking forward to on the way back was soaking, damp and I was a bit miserable.

The trip was beautiful and whether you are a walker, fisher or both I’d definitely recommend visiting this gorgeous part of Scotland.
I have seen Loch A’an and, on this occasion, the weather defeated me.
But I will be back!