Some people screwed their faces up at me when I mentioned visiting Belfast. “Belfast? What’s special about Belfast?” I heard. You might get the same.

I, personally, had two motivations for visiting Belfast. Firstly, I wanted to see Titanic Belfast which is THE Titanic museum, based in the renovated ‘Titanic Quarter’ of the city, yard from where the historic ship was launched. Over the years I have grown fascinated by this ship and the history behind it. The hope, the grandeur, the expense, the optimism and ultimately the tragedy of this ship is absolutely fascinating to me and, being a big museum geek, I always wanted to visit this highly regarded museum.

Secondly, I have never been to Belfast and it is so close-by. As a part of the United Kingdom, Northern Ireland is so easy to get to and it just seemed like somewhere I really ought to visit at some point in my life. I wanted to travel to a city ‘abroad’, solo, for the first time in my life and I wanted to see if it was possible to spend one day in Belfast, via flying, and have a good time. Could it be done quickly? Was is convenient? Would there be enough to do?

I am going to write this section from the perspective of someone visiting from the UK but the information should still be valid for those planning to visit from further afield.

Belfast is serviced by two Airports. The city can be reached by Belfast International Airport (which is about 18 miles from Belfast) and by George Best City Airport (which is a mere 3 miles from the City Centre). For me, George Best City Airport was my destination and I flew from Glasgow Airport in Paisley. Now, if you are flying to Belfast from the UK you are spoiled for choice. A quick look on Google or Skyscanner will reveal a wide range of departure choices. At the time of writing this article flights from Glasgow, Edinburgh, Leeds, Manchester, Birmingham, Nottingham, Aberdeen, Cardiff, Doncaster, Exeter, Inverness & Southampton are available. Belfast is easy to get to.

Being an internal flight, no passport was required (joy!) and the flight was to be a reported 40 minutes. It felt like half that time. The plane barely felt like it had straightened up before it was descending again and I was in Belfast for the first time in my life.

The First Thing You See On Arrival

Belfast is serviced by two international airports and has a wealth of taxi’s, coaches, buses, the train service and ferries for you to use to get to the city and travel around it. HERE is a link to the official Visit Belfast transport page for you to prepare your journey.

One thing I had resolved to on this trip was to walk everywhere. No public transport would be used. From the airport, around the city and back to the airport. I wanted to see if Belfast City could be explored entirely on foot. So before I set off, I made sure I had a pair of my walking boots on and headed off for the airport.

Let’s see what Belfast had to offer!

A very short walk from the airport is Victoria Park and I had marked this as the first thing I wanted to see on my itinerary for the day. It looked like a pretty park and a nice route through which to reach the Titanic Quarter in the city. 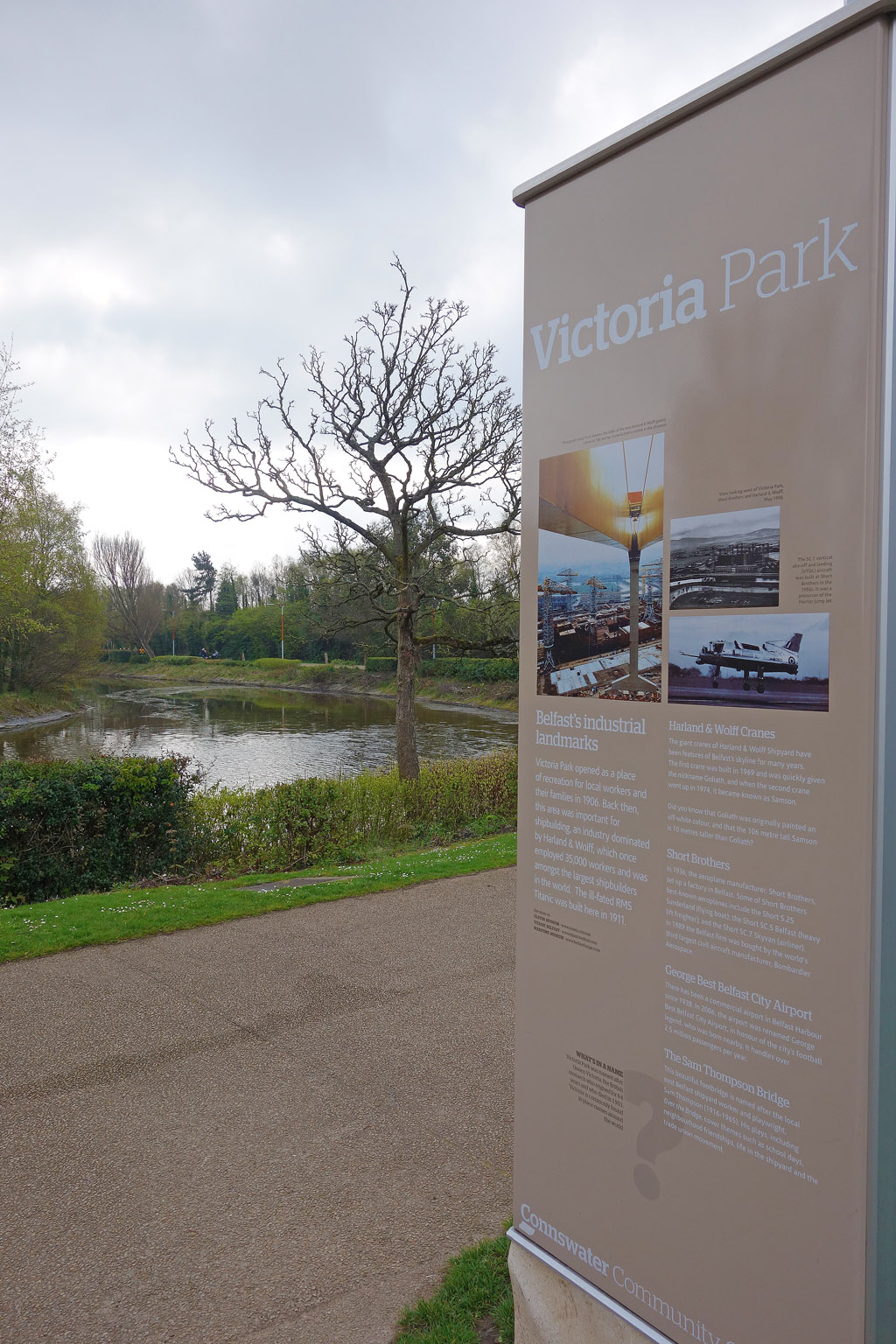 Just One of the Information Boards Dotted Throughout the Park

The park was lovely. A small lake encircles a central island which holds various football pitches and other things, the lake itself is full of wildlife (I enjoyed watching a coot diving under the gentle ripple of the water!) and the whole atmosphere of the park is very pleasant. Joggers, dog walkers and couples strolling hand-in-hand all passed me as I made my way through it: there is even an observation area (I presume for bird watching).

I also have to commend Belfast City Council and indeed the people of Belfast: the park was immaculate. Strolling along the tree-lined pathways, with well-kempt grass, was a lovely introduction to the city for me. There was no litter in sight either and the waterways were very clear with abundant wildlife. 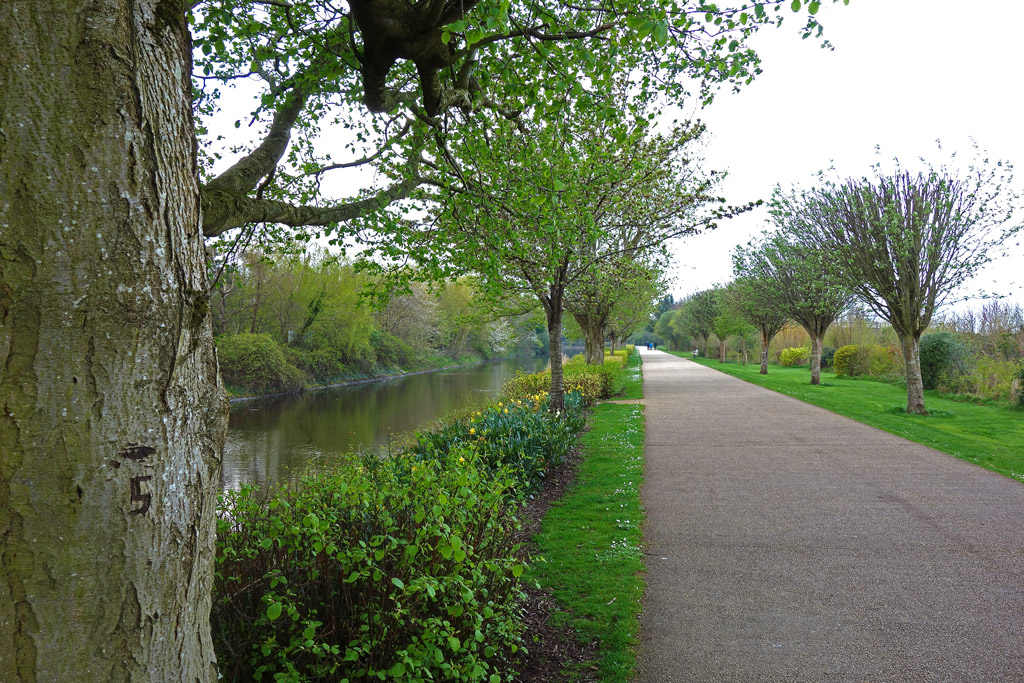 It’s little wonder it has such great reviews on TripAdvisor.

I left the park, passing over the pretty Sam Thompson Bridge and I was immediately transported to an industrial setting and I felt myself panic a bit if I’m honest. “Oh I hope Belfast isn’t all industry, factories and trucks!” I remember thinking to myself as I left the idyllic park and was faced with…factories and trucks! Now, admittedly, this won’t be an issue if you drive or use public transport but if you walk from the airport as I did I can assure you: you have nothing to worry about.

En route to the Titanic Quarter the industry began to give way to trendy office buildings, marina-side apartments and docked yachts! (I also got a little distracted by the amazing Audi and Porsche garages that sit side by side on Sydenham Road) 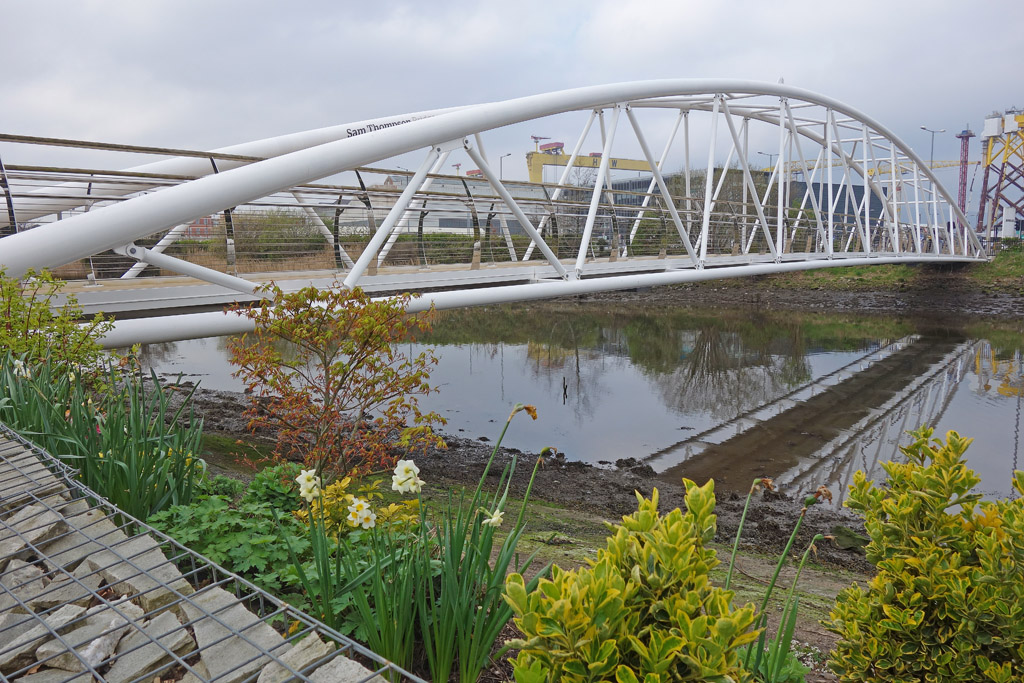 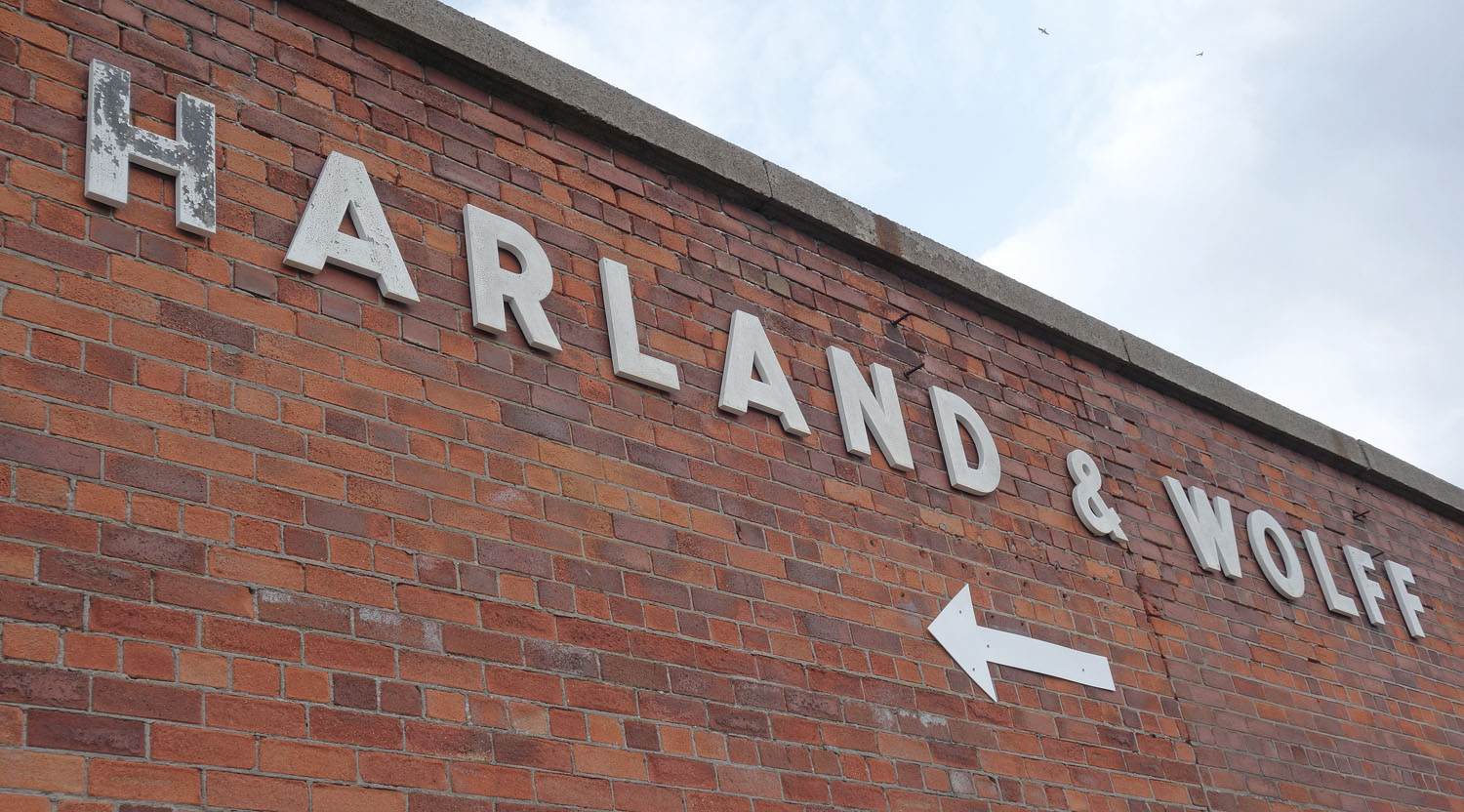 Harland & Wolff: The Famous Shipmaker That Constructed the Titanic 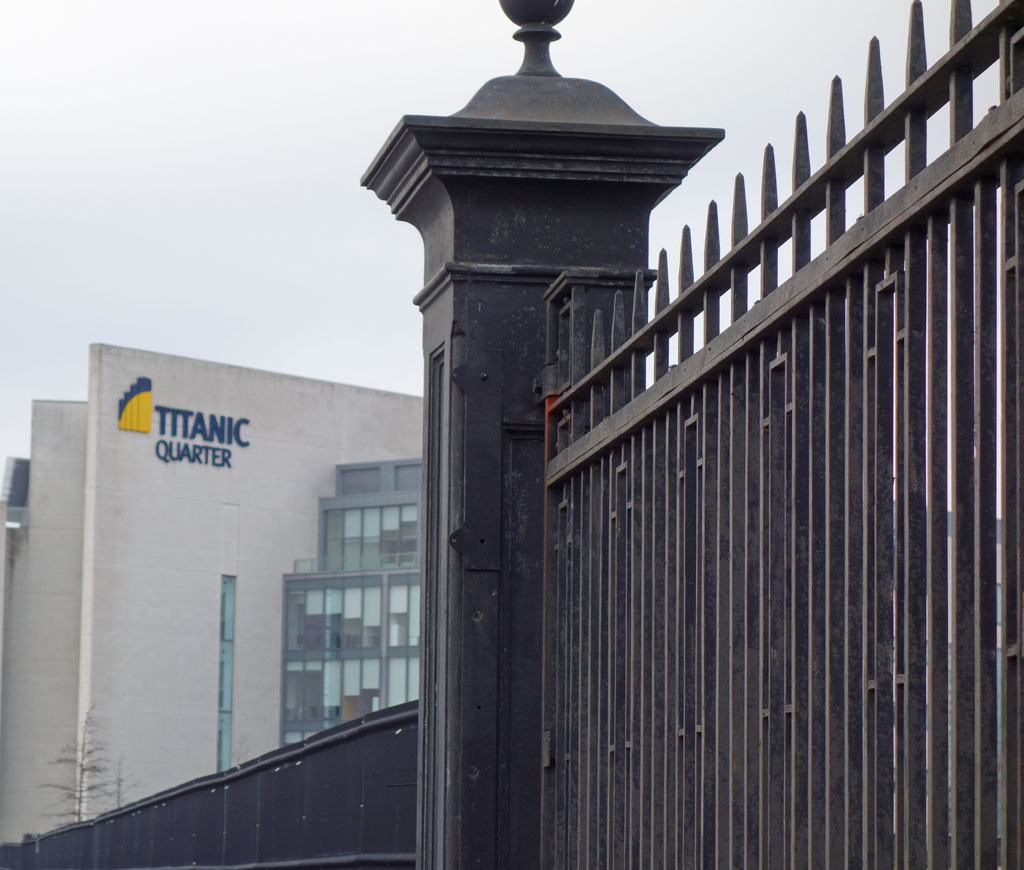 My Target Comes Into View 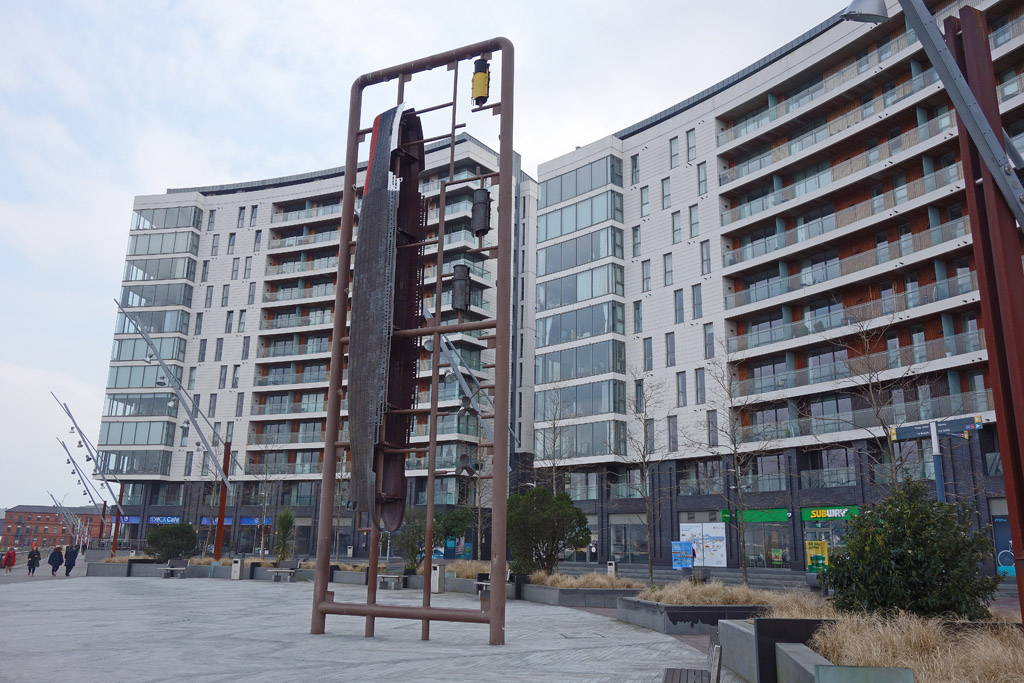 ‘Kit‘ the Sculpture of Titanic: In The Beautiful Titanic Quarter

I work in the museum field. I spent two years of my life earning a Museum Studies Master’s. Wherever I go to in the world, I visit the local museum. It’s a superb way to get a feel for the local culture, by learning about the history. So when I say Titanic Belfast is one of the best museums I have ever visited that really means something.

The building itself is beautiful and gives off the vibe of looking at the prow of a ship (The pointy, front-nose part!). On the Titanic Belfast official site they say:

The façade is clad in three thousand different shaped silver anodized aluminium sheets folded into complicated asymmetrical geometries, creating an awe-inspiring visual appearance, enhanced by reflective pools of water surrounding the base. The facades lean out at angles of up to 72 degrees.

Of the three thousand panels, two thousand are completely unique, while none of the ‘typical’ panels repeat more than twenty times – creating a startlingly random effect, always managing to catch the light, a bit like a cut diamond. 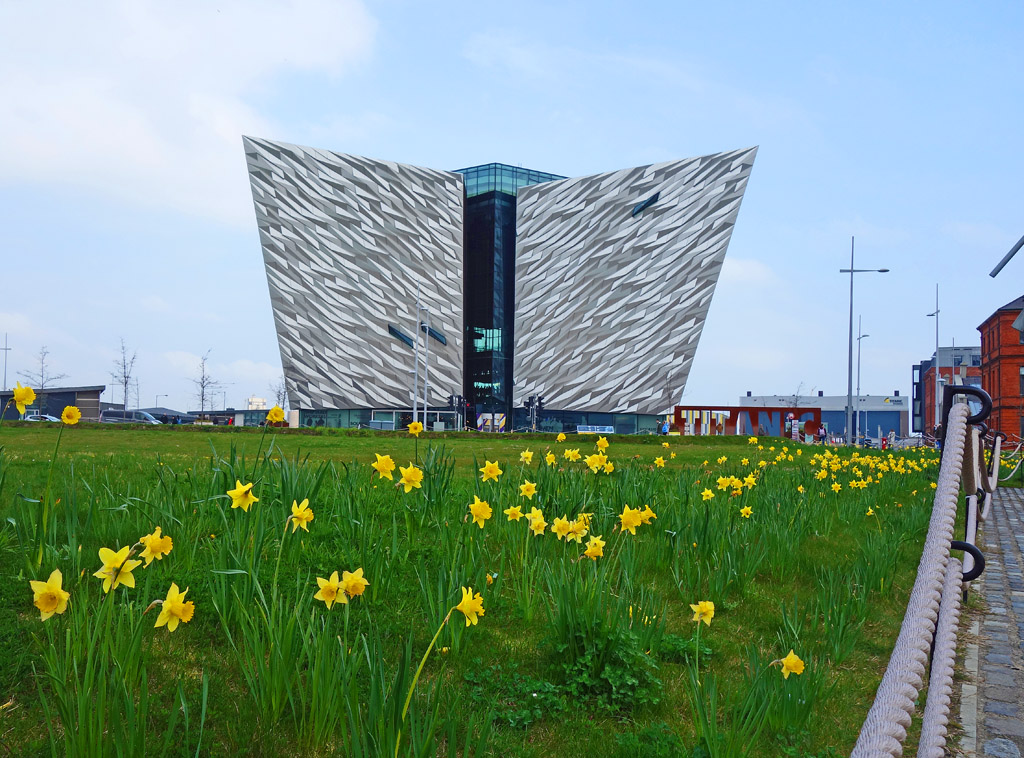 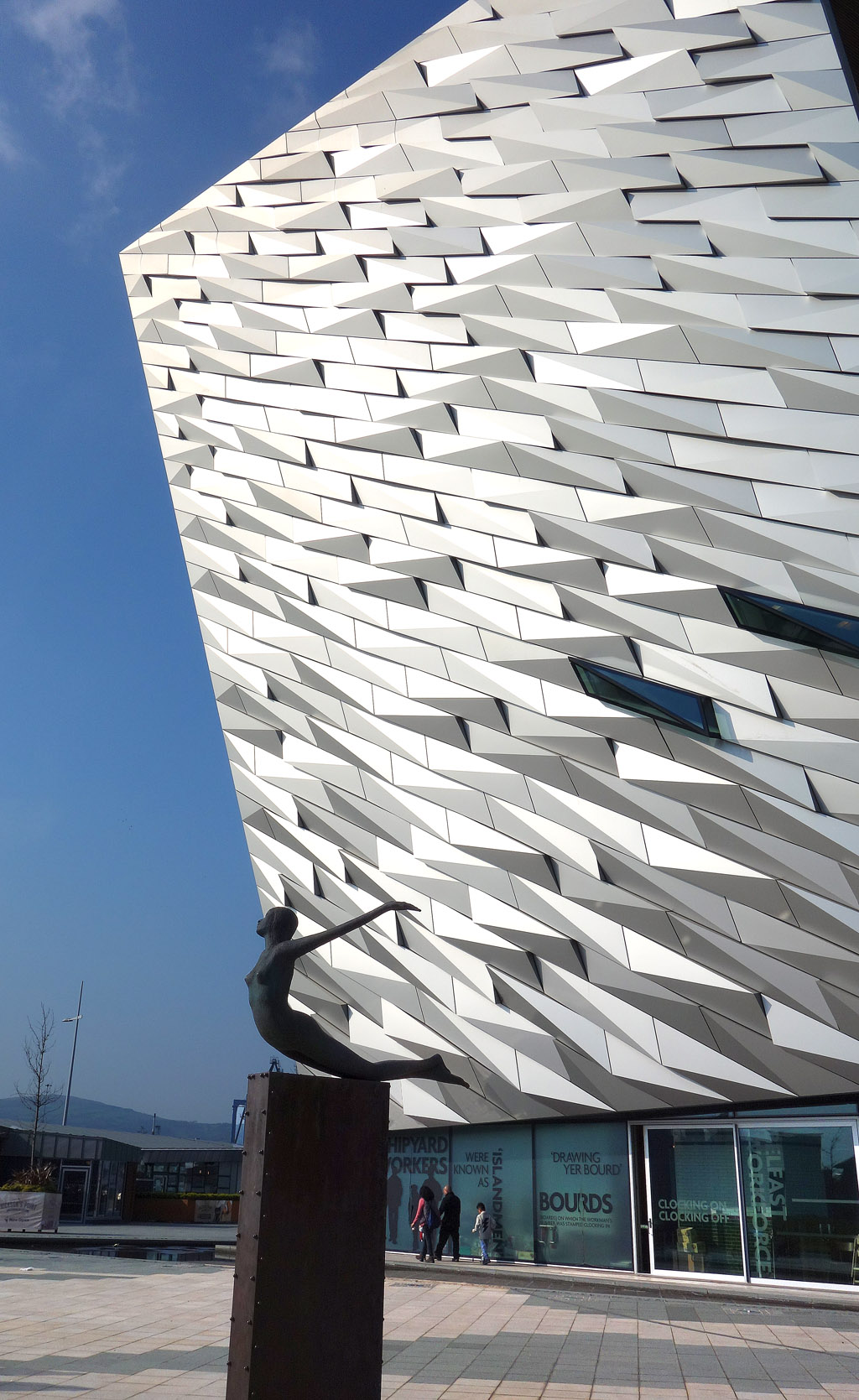 Once you get inside you are in for a real treat! Once you buy a ticket (for a scheduled time: the place is busy!) you will ride the elevator up and begin a tour through the history of the legendary ship. Beginning with a history of Belfast at the start of the 20th century, you will ride a mini-car and feel the heat of the shipyards, experience the joy of the launch of the vessel, walk through the recreations of the rooms aboard the titanic, learn how about the sinking including hearing interviews from survivors and eventually watch a film in the unique theatre of divers exploring the wreck.

I spent almost 3 hours in the museum. It could have easily been more. 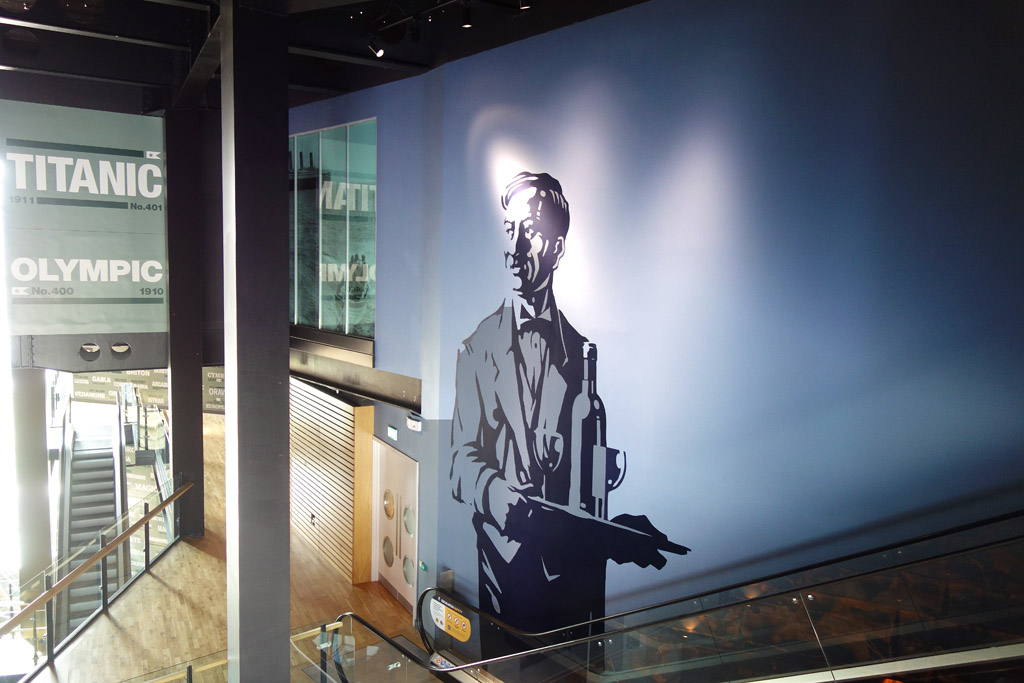 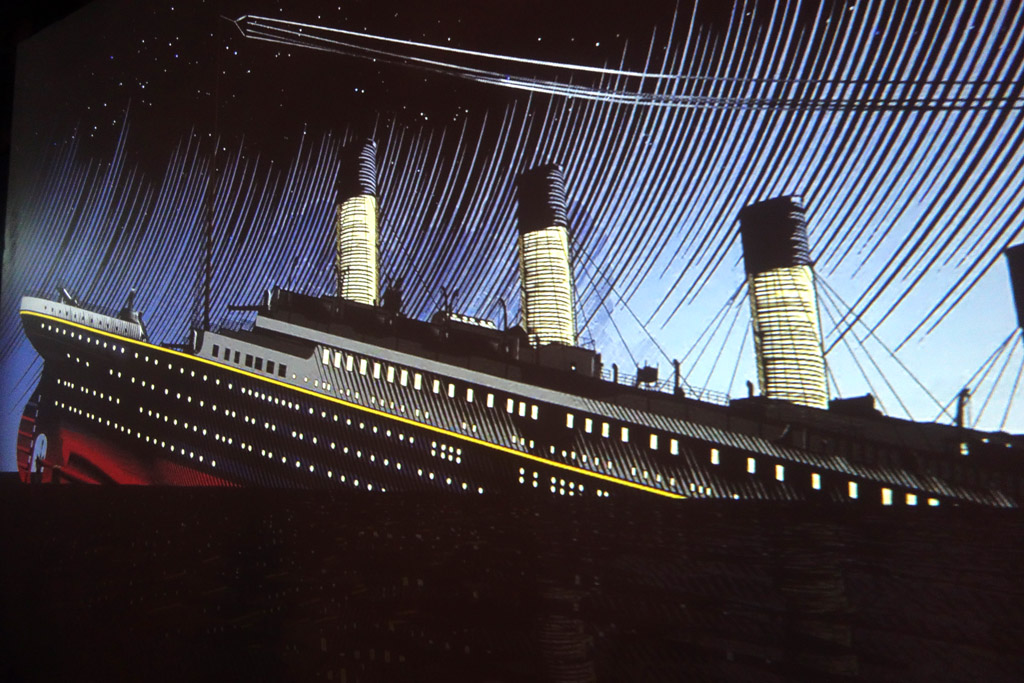 A Colourful Animation of the Sinking in a Darkened Room 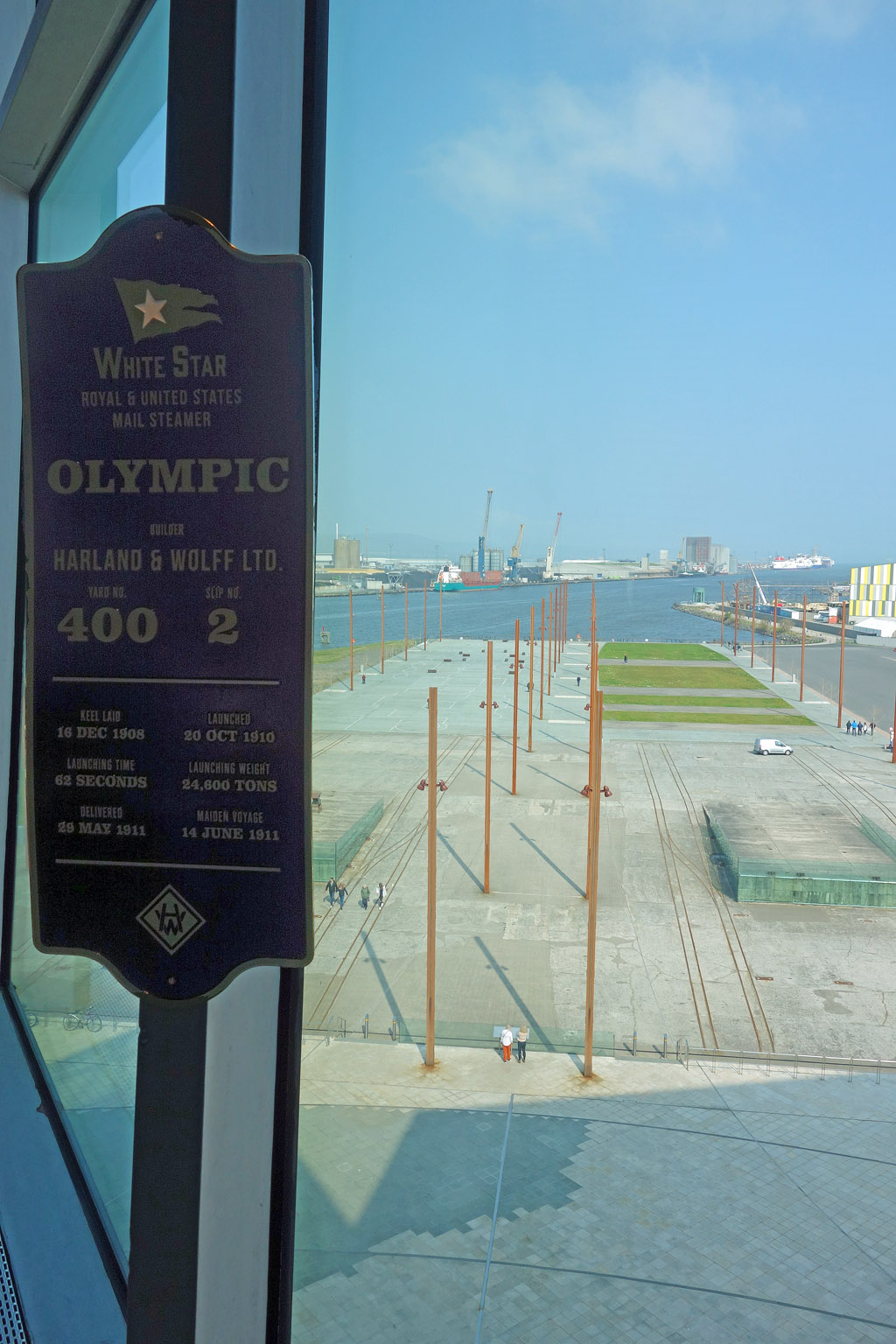 The Yards Where Titanic & Olympic Were Launched

As part of your entry fee to Titanic Belfast, your ticket also grants you access to SS Nomadic: the last remaining White Star Line vessel still in existence, she was used to transfer passengers and mail to Titanic & Olympic. 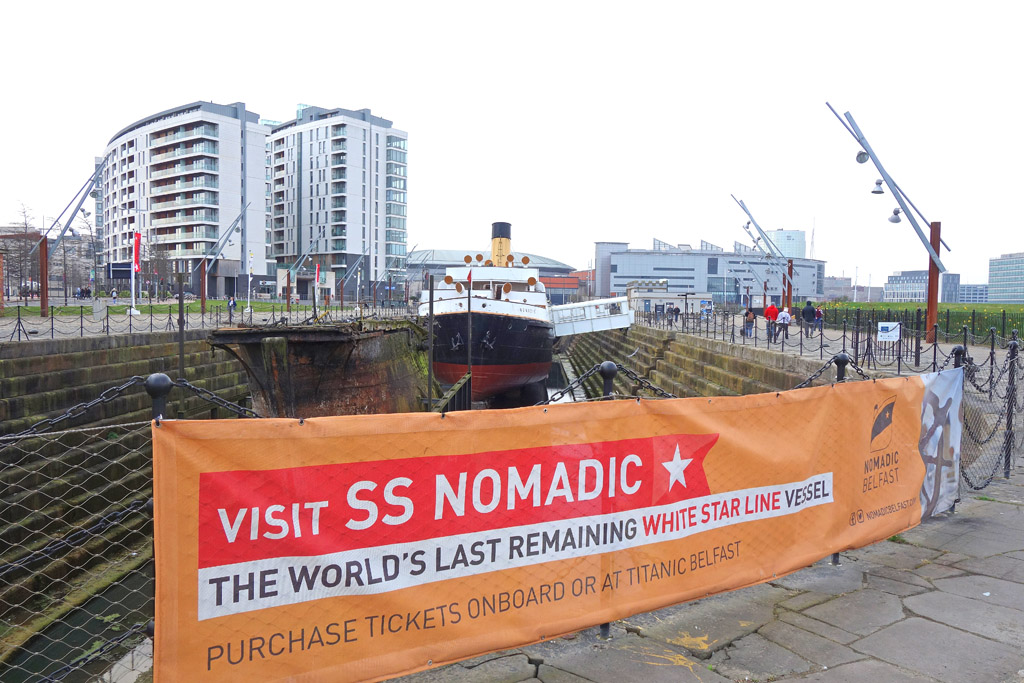 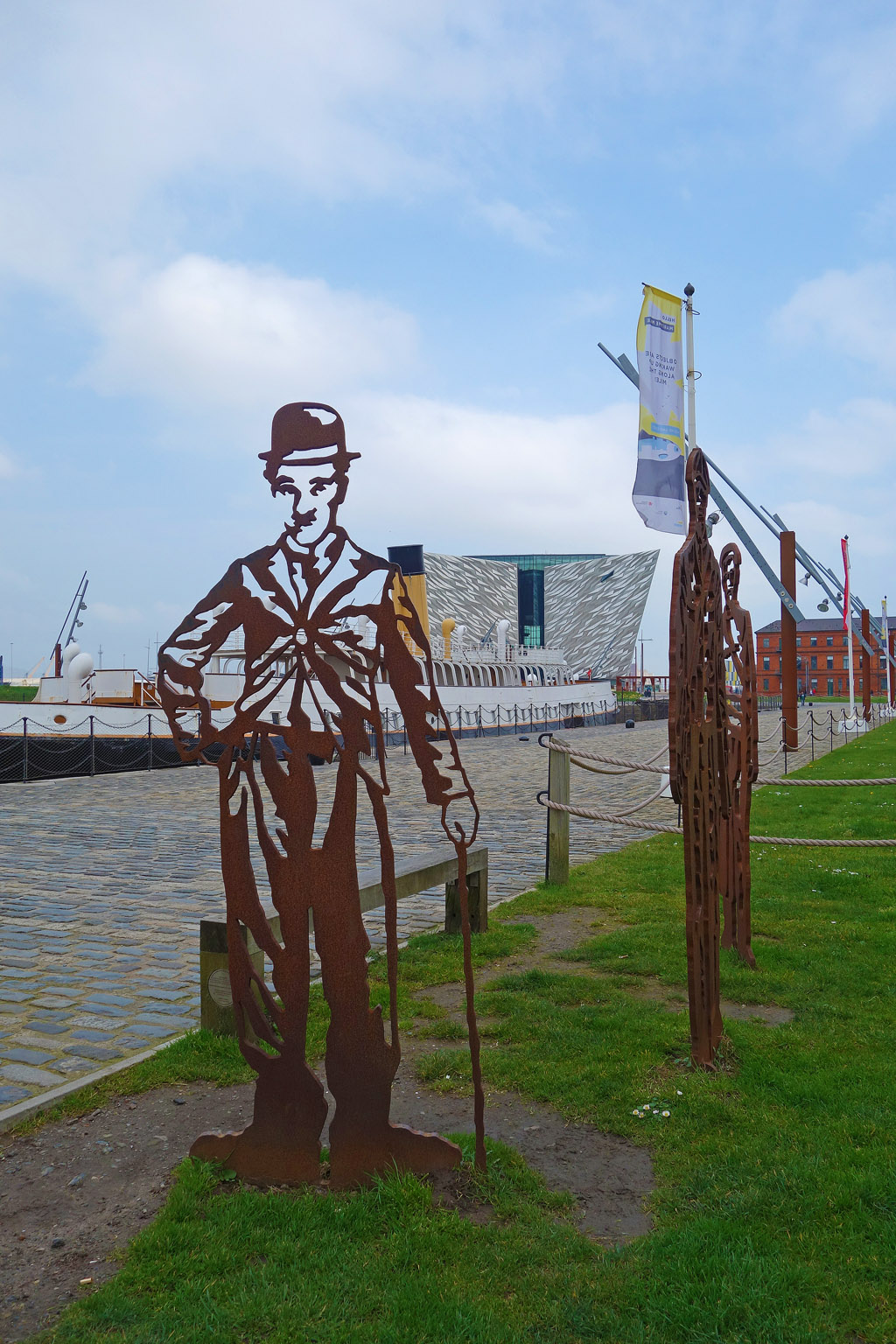 Aside from Titanic Belfast, one of the main things I wanted to see was HMS Caroline. Not only is she a surviving WWI light-cruiser but she is also the last surviving ship that fought at the Battle of Jutland in 1916 (the last battle fought primarily with battleships).

A single adult ticket is £10.75 and I’d say it was well worth it to walk around this amazing piece of naval history. Your tour starts at the museum that gives a history of the ship before picking up your included audio guide and boarding the ship itself. The tour starts with a brilliant video about the Battle of Jutland and then you are free to wander throughout the ship, from the engine room to the deck. 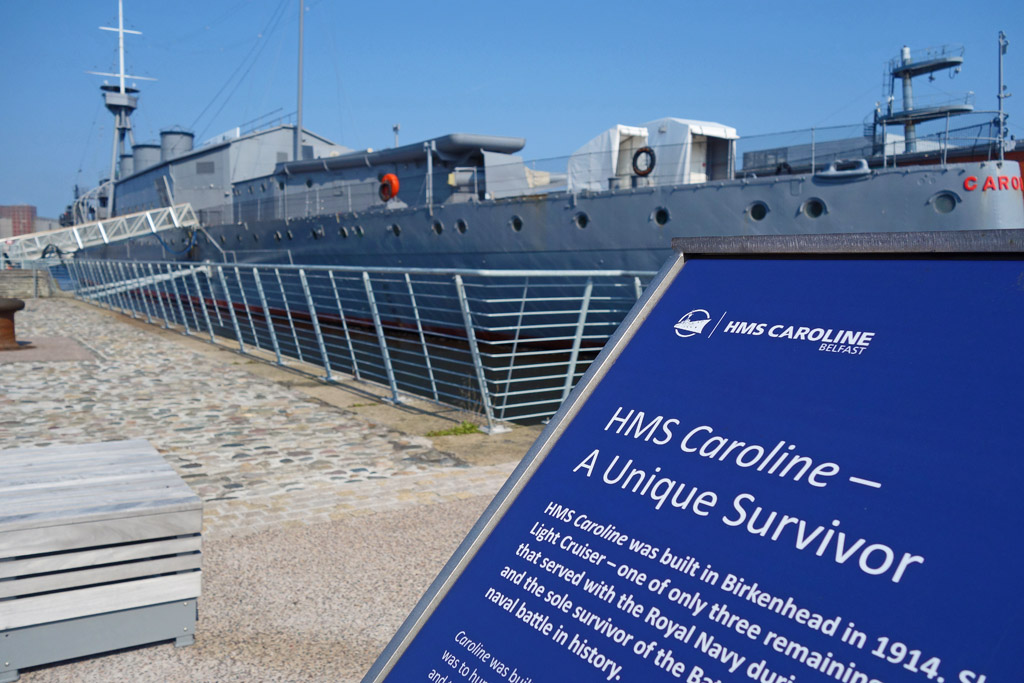 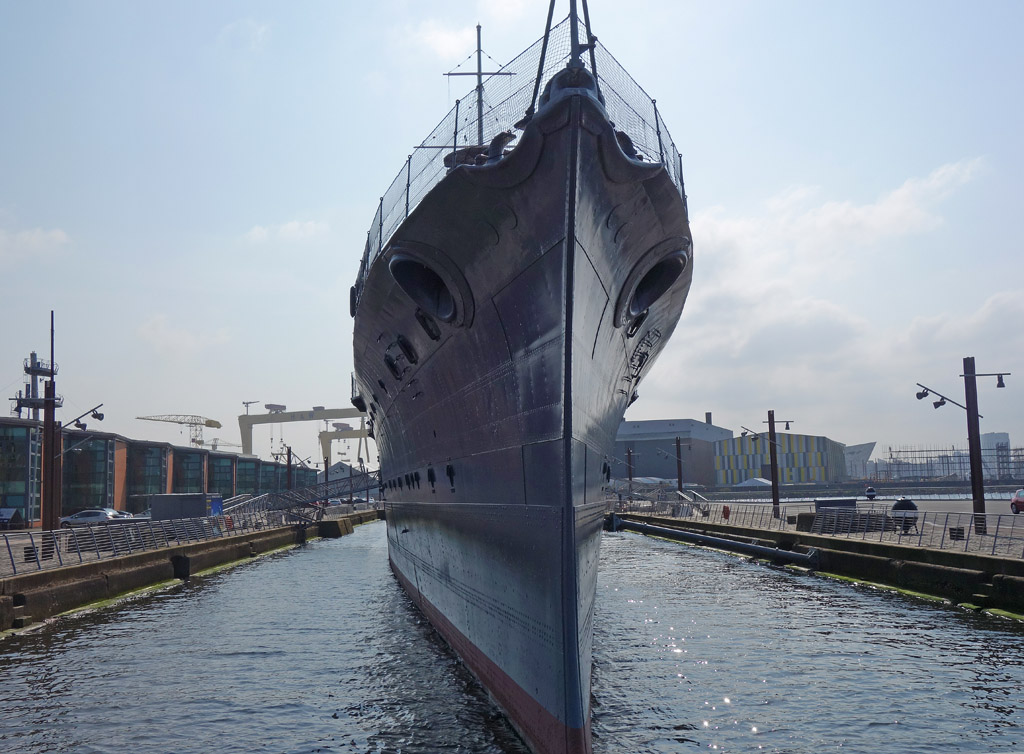 The Walkway to the Museum Gives Amazing Angles 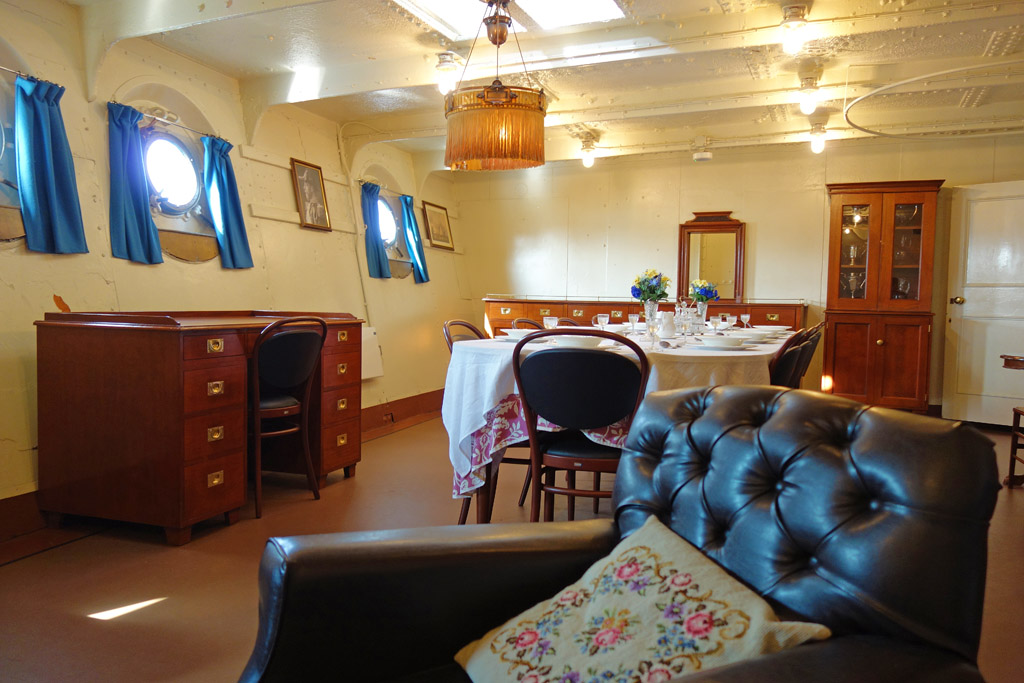 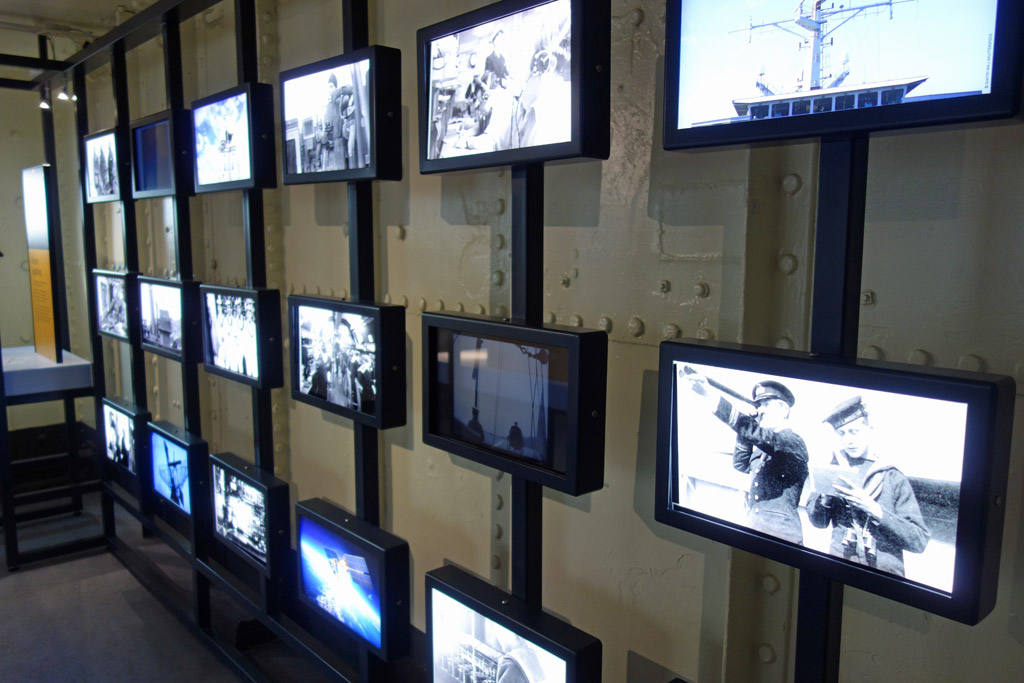 No seriously. Belfast has a sculpture of a big fish. 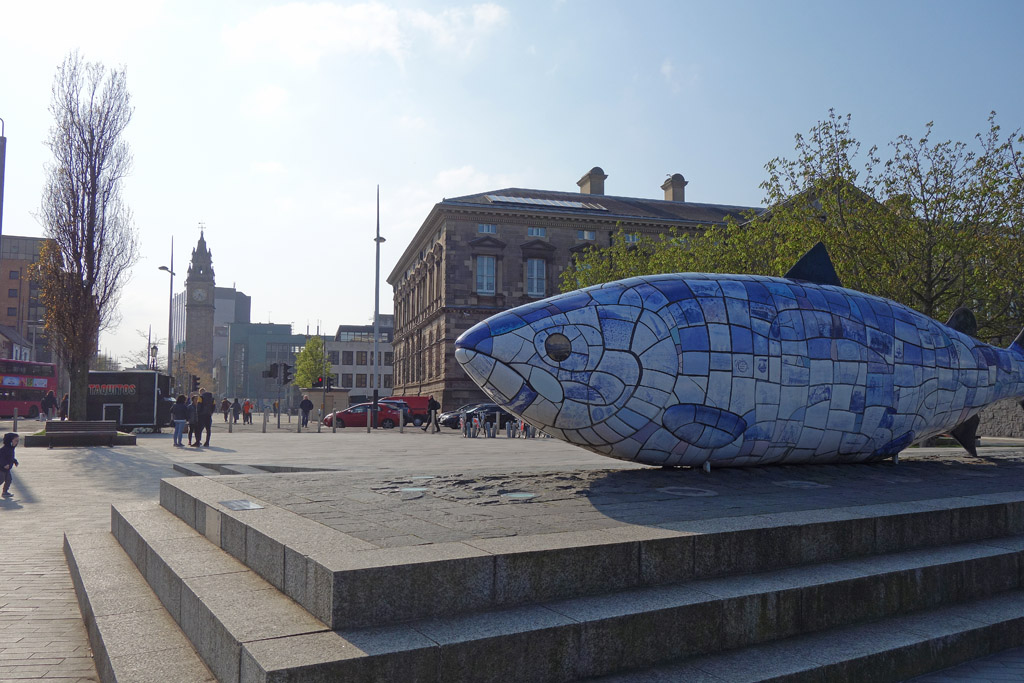 I’m not sure if it’s because I fly fish, because it’s a salmon or because of the dozens of tourists taking pictures of it…but I loved the ‘Big Fish’. It also has quite possibly the greatest sign I have ever seen.

The Architecture of Belfast

The Belfast City Hall is gorgeous. Surrounded by tourists (for good reason) and an incredible building. It’s a must-see in the city.

You could also visit the Parliament Building in Belfast which is out with the City Centre. I didn’t have time to visit it but it looks wonderful. 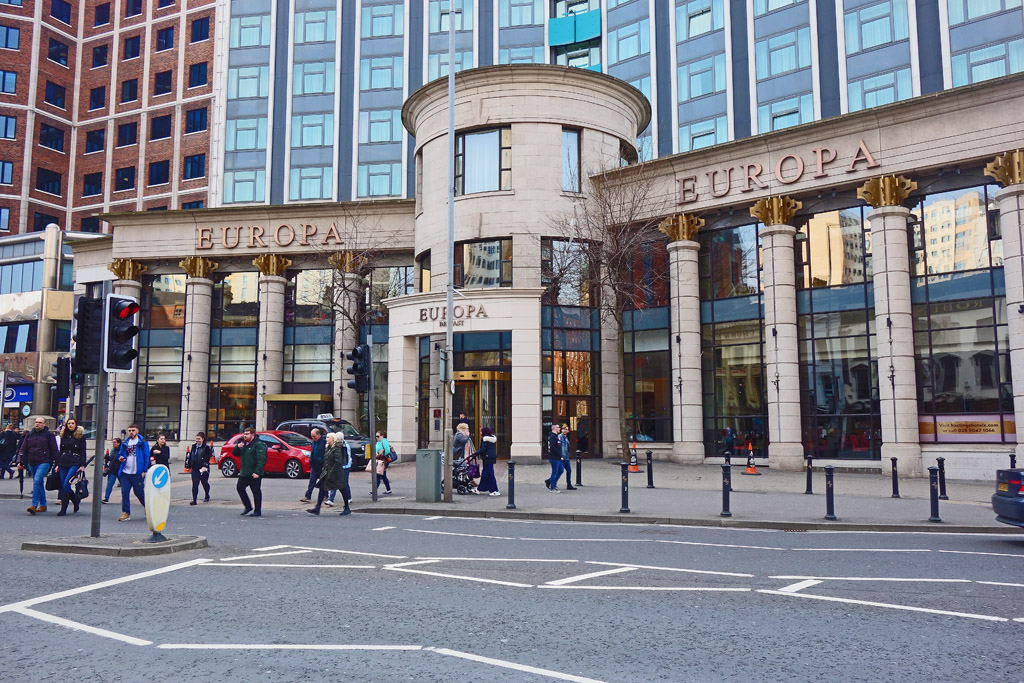 The only reasons I knew to visit this building was thanks to one of the wonderful guides at the Victoria Square Dome who recommended I go and see the Europa Hotel (because I mentioned I wanted to see the Grand Opera House) because it has a very interesting history: during the Troubles, it had the amazing record of being the most bombed hotel in Europe! 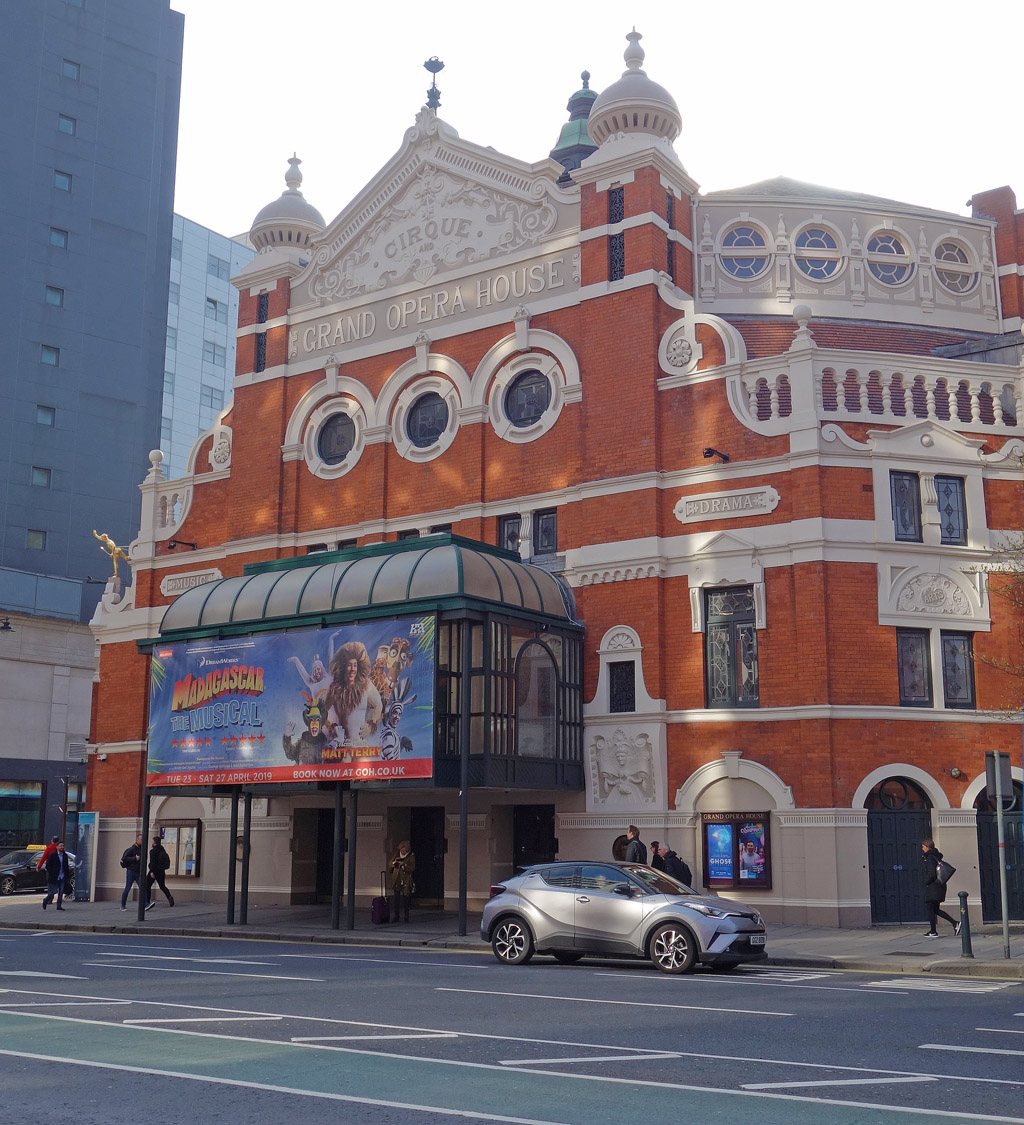 Next door to the Europa is the beautiful Grand Opera House. I love the design of the building and it stands out a mile away on Great Victoria Street. 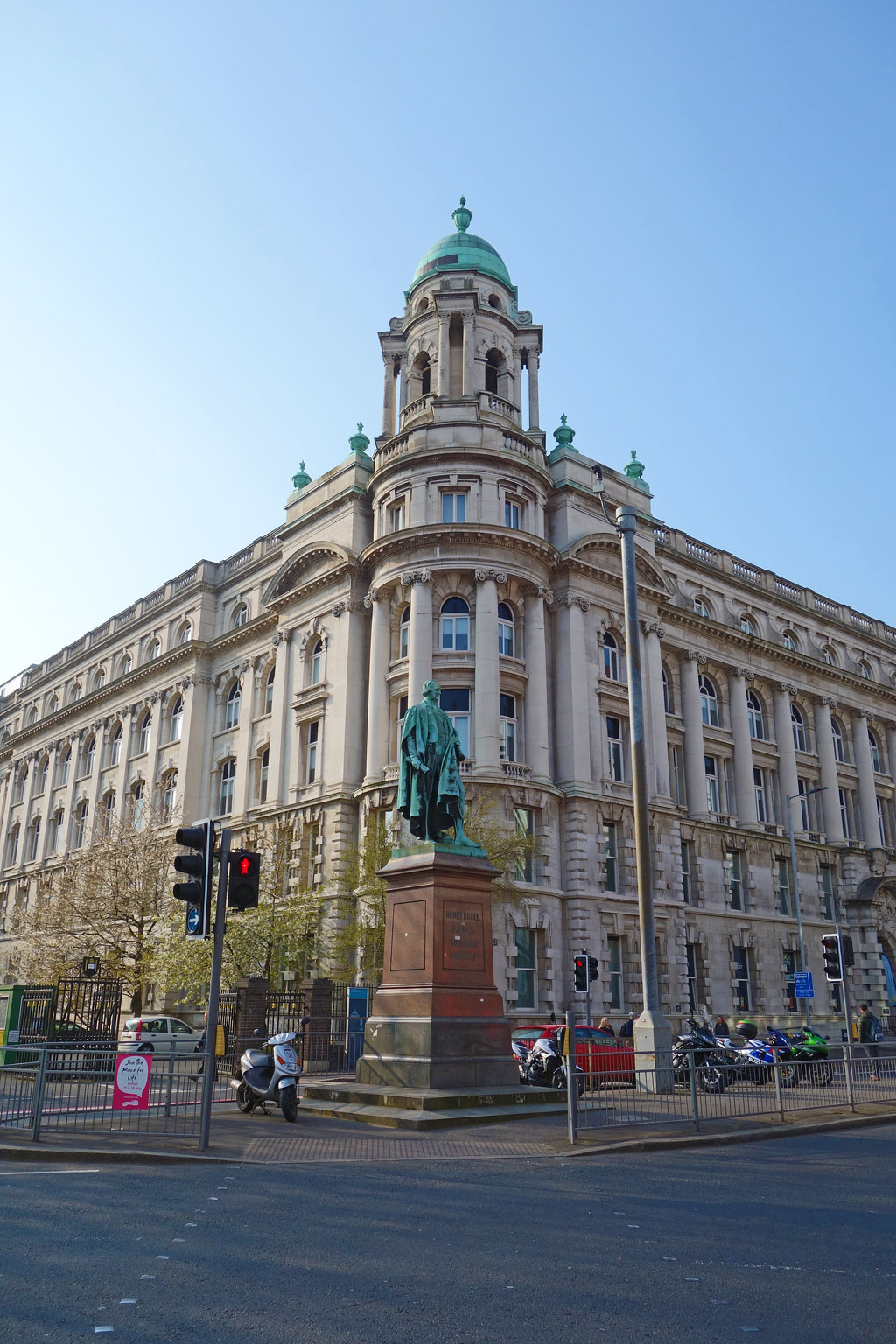 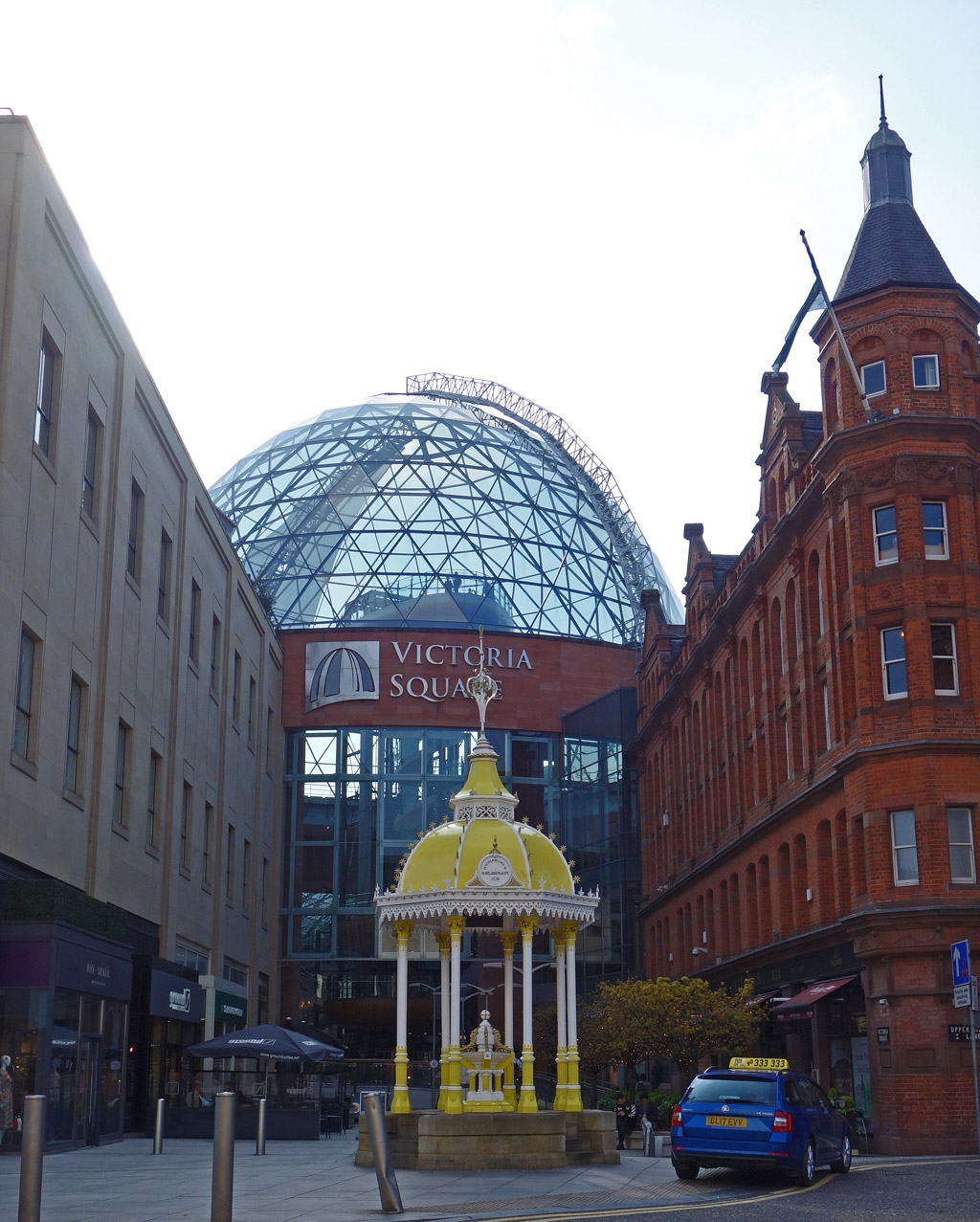 The Shopping Centre With The Amazing Dome

If you visit Belfast then you must see this. In the centre of the city is Victoria Shopping Centre and at the top of the centre is an awe-inspiring glass dome which offers 360 degree views around the entire city. Not only that, but the Dome is staffed by 2 guides who will help you with your visit by recommending things to see and pointing our highlights on the skyline.

As you’d expect, Belfast has a bountiful supply of wonderful restaurants serving traditional Irish food and just about everything else you can imagine. I checked the usual places, TripAdvisor has a great ‘top ten’ list of places to eat, the BBC has a guide and Google throws up a million results. The choice really is up to you! As for me, I Tweeted asking for suggestions for somewhere nice to eat and Emma from the blog ‘More Than London‘ sent me a link to her guide to places to eat in the city and ‘Yardbird‘ caught my eye so that’s what I decided on.

A trendy bar hidden down a small side street called Hill Street in the city centre. It has a stunning mural outside and once you head upstairs you will find a wonderful chicken restaurant. I had a quarter of chicken & chips with a large cider to wash it down (It IS Ireland after all). 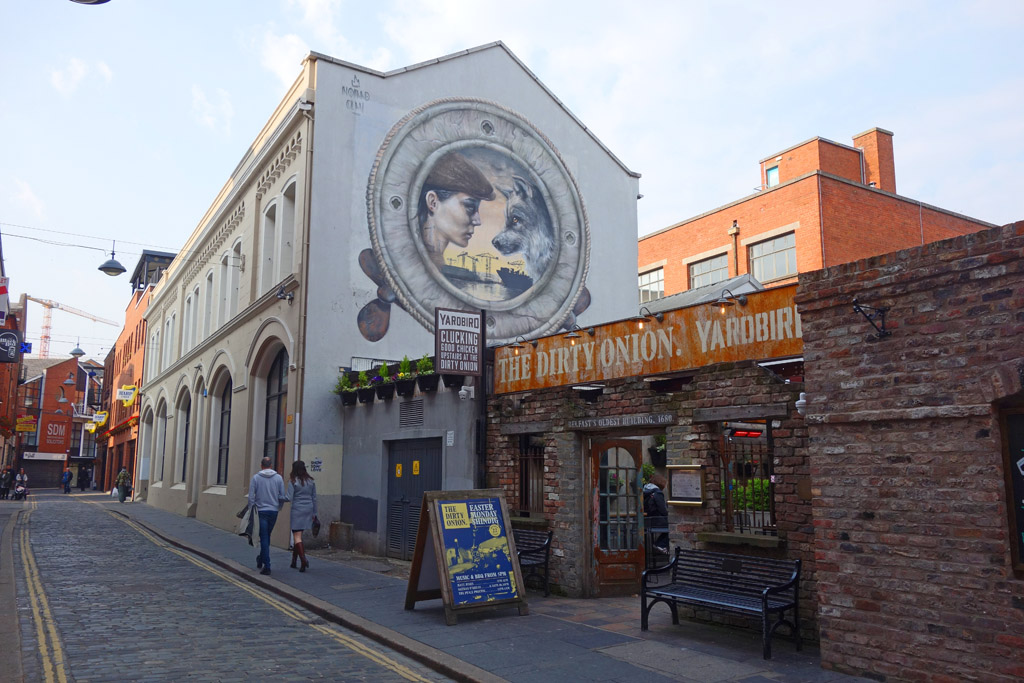 I Just Love The Vibe of Yardbird

I was blown away by Belfast at the end of my visit. I had expected an industrial town with an important museum and what I got was one of the most aesthetically-pleasing cities I’ve ever been to with a wealth of things to see and do. The fact it was easier to get to than Aberdeen or Inverness was remarkable to me. Titanic Belfast is one of the best museums I have ever seen, HMS Caroline was a wonderfully unique ship to see.

Think of a city that is as vibrant, trendy and easy to stroll around as any I have ever been to. 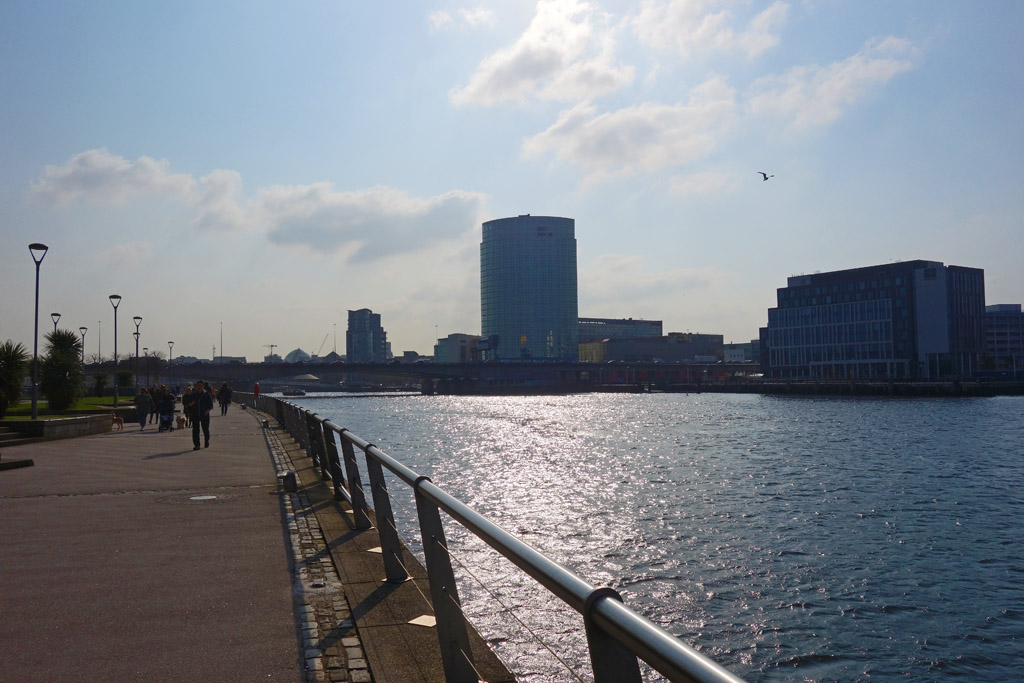