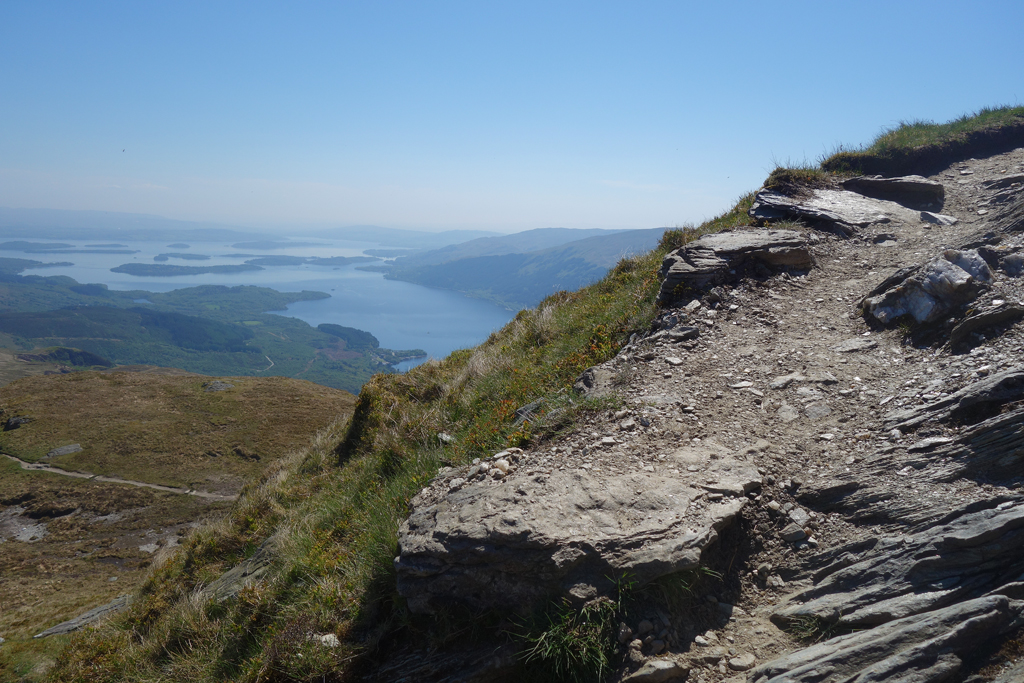 Ben Lomond is one of the most famous Munro’s in Scotland and I had completely ignored it. This wasn’t anything to do with the mountain itself, on the contrary, it always sounded like a spectacular summit in a beautiful location. However that popularity see’s about 30,000 visitors climb it every year which naturally puts me off as I love to venture out to these mountains to get away from people and to enjoy the seclusion and serenity. This is why I haven’t gotten around to bagging other famous peaks such as Ben Nevis, Schiehallion or Ben Lawyers.

Recently though, with such lovely weather, I decided a day spent bagging Ben Lomond would be a fun way to spend a beautiful day. I could quite easily tolerate a crowded summit if it meant spending a sunny day out in the wilds of Scotland.

I was, as usual, too excited. I tossed and turned the night prior and sprung out of bed very early. After packing my bag and practically inhaling breakfast I jumped into the car and headed north. It was early in the morning, the sun was shining and the sky was a rich summer blue. I’d opted for just a shirt with a fleece for a backup just incase. On reflection, this was utter idiocy. Who packs an emergency fleece in a heatwave? Well, apparently I do. My inner-Scot just always expects rain regardless of weather reports saying otherwise and weeks of burning sun giving me ample evidence.

The drive northwards was lovely. I crossed the Erskine Bridge with the river Clyde shimmering underneath and soon I was bearing down on Loch Lomond. I just love the villages here and if you are in the area I really suggest you stop and soak in the atmosphere. Drymen and Balmaha are two pretty little villages in secluded woodland settings which have a variety of hotels and pubs where you can get a meal and a drink or plan a longer stay.

From Drymen the road becomes quite narrow, with the usual blind bends and twists and turns I have come to expect from the Scottish countryside. Eventually though, I arrived at the Ben Lomond car park (just before Rowardennan Lodge). It is a beautiful place. Once I had my boots on and my bag on my back, I ambled to the loch to enjoy the stunning views. 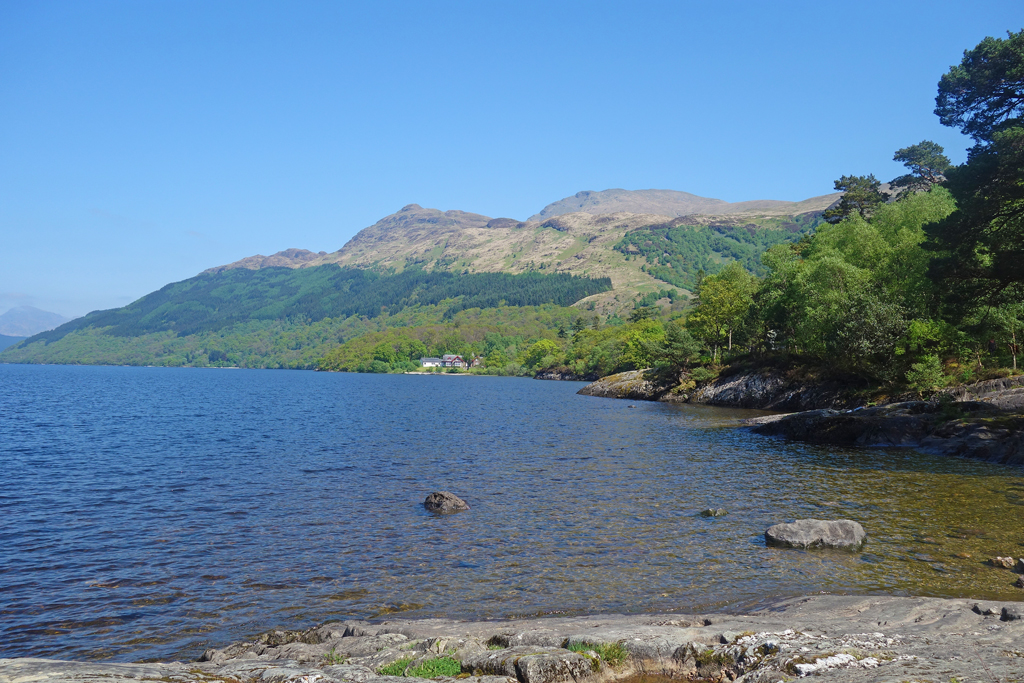 One feature I particularly enjoyed was the Loch Lomond National Park Memorial Structure which offers a very pretty photo opportunity. If you look through it, it is said it focuses on one of the prettiest views in Scotland. 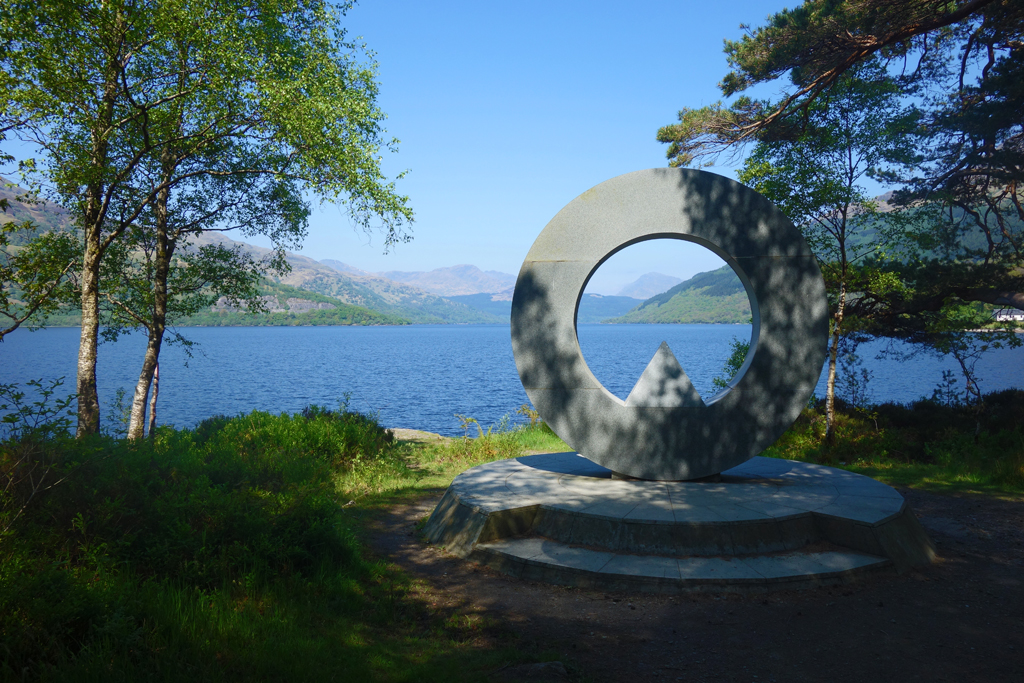 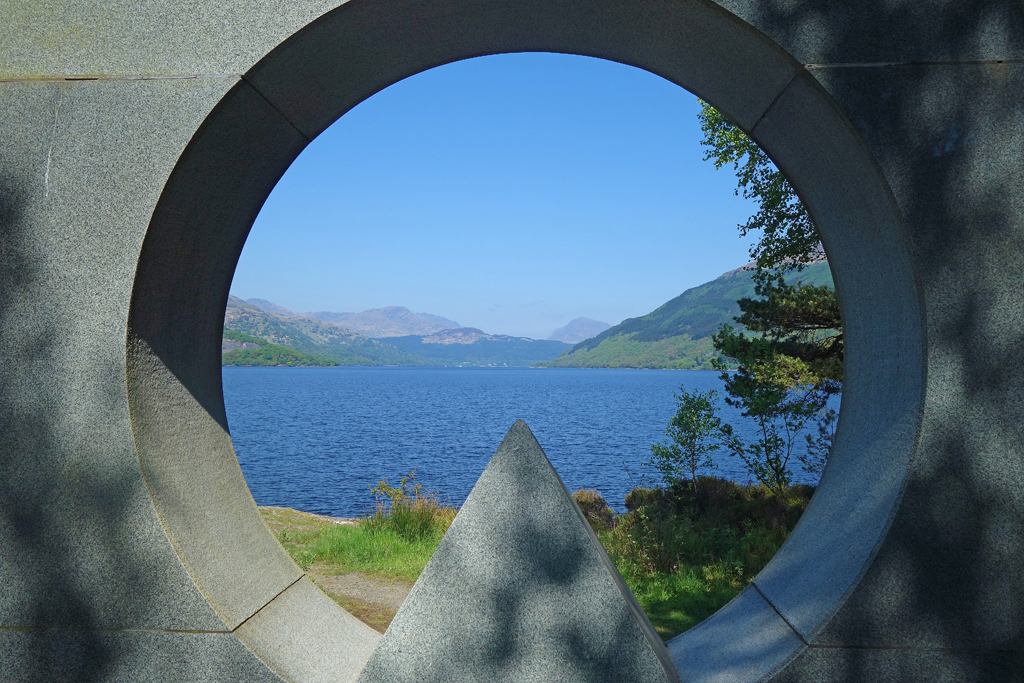 I spent quite a bit longer at the Lochside than I had intended. I was enjoying listening to the gentle sounds of the water on the small bay, I was enjoying the gorgeous views and the pretty sculpture. The sun was now very warm and the whole setting had a lovely relaxed atmosphere. I lost all track of time but, eventually, I knew there was a Munro to be bagged and I slowly set off on my chosen route.

Which route? Well, Ben Lomond has two main routes. There is the tourist route, which is a relatively straightforward ascent from the car park on broad paths. There is also the Ptarmigan Ridge route which is a far more arduous route, ascending up the western side of Ben Lomond before climbing the Munro itself.

On this very warm day, guess which route your buddy Bry chose? 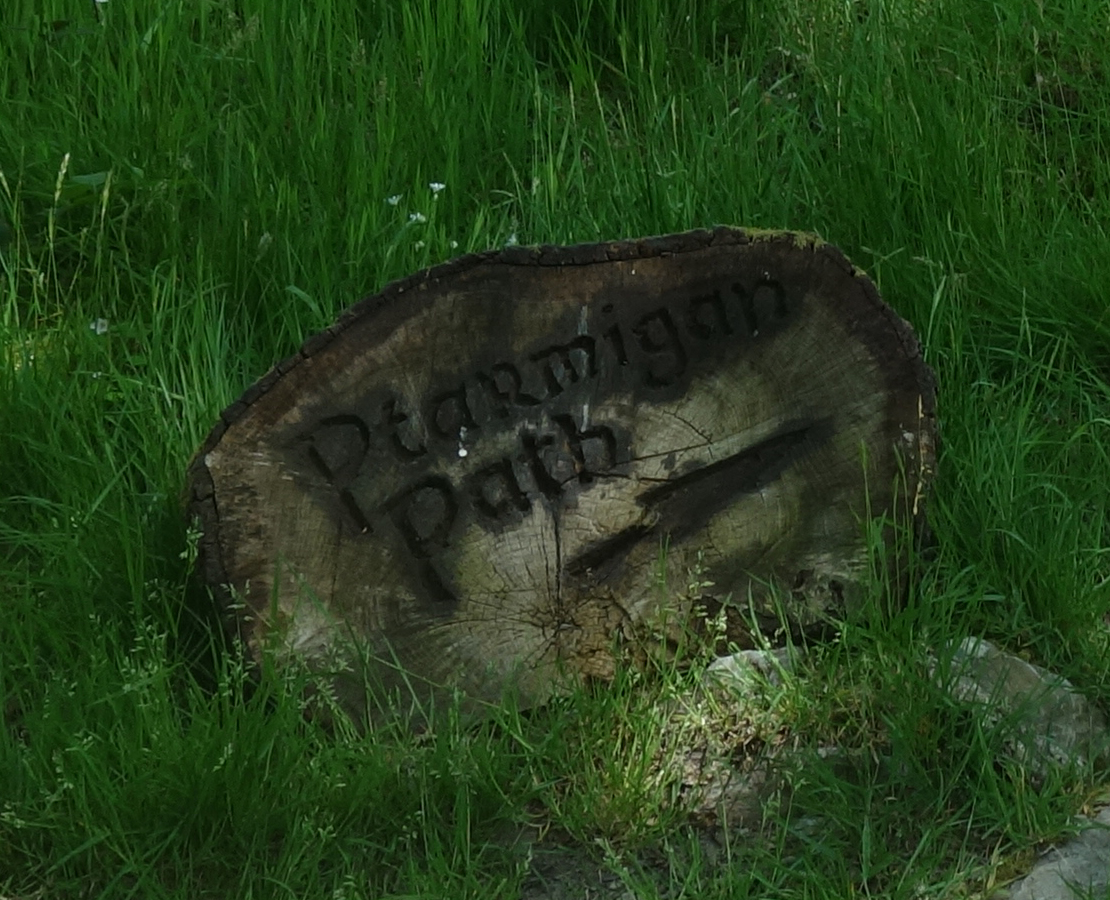 As If There Was Any Doubt

I wanted to really ‘earn’ this summit and opted to avoid the tourist route. The Ptarmigan Ridge route seemed like a great idea. A narrow path, climbing above the beautiful loch below. It certainly started off well once I set off: I was immediately in a field of bluebells and the colours were gorgeous. 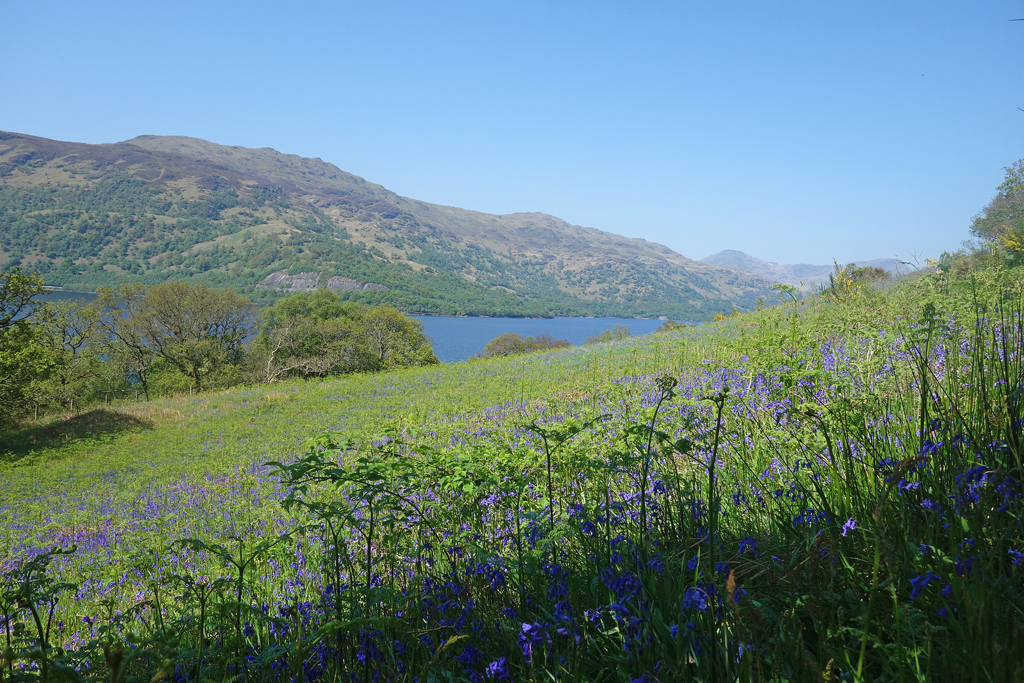 It wasn’t long though before I decided I may have made a slight tactical error. It was warm. Very warm. It wasn’t long before my shirt was being unbuttoned and I was beginning to question if perhaps today was a bit too warm for this walk.

As you ascend through the tree’s, the views begin to appear and the beautiful sunlight was at least creating some great photo opportunities. 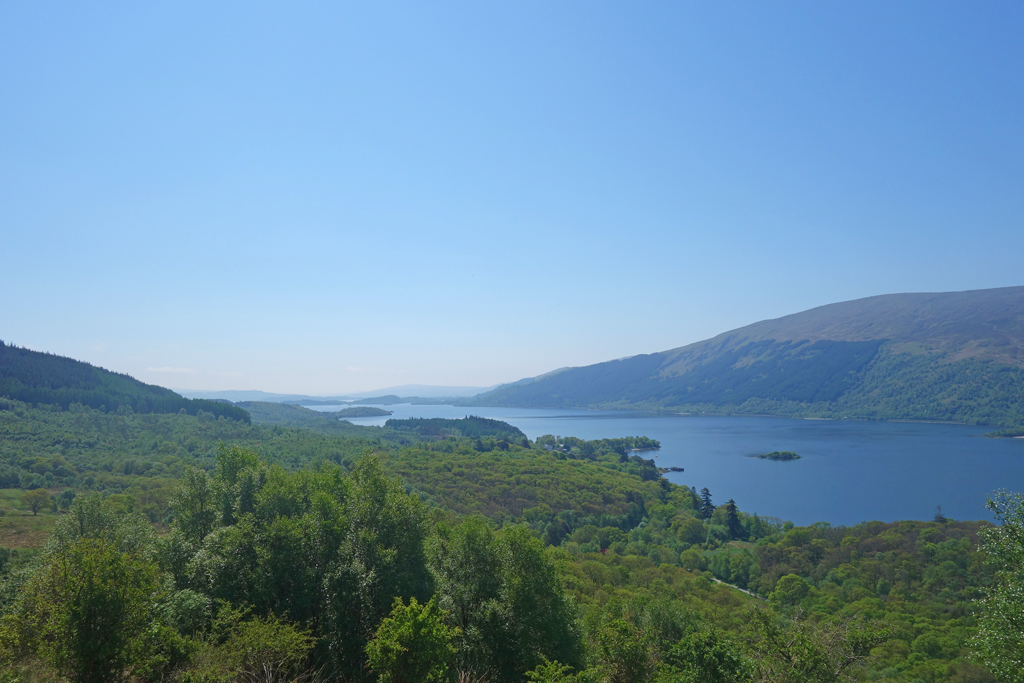 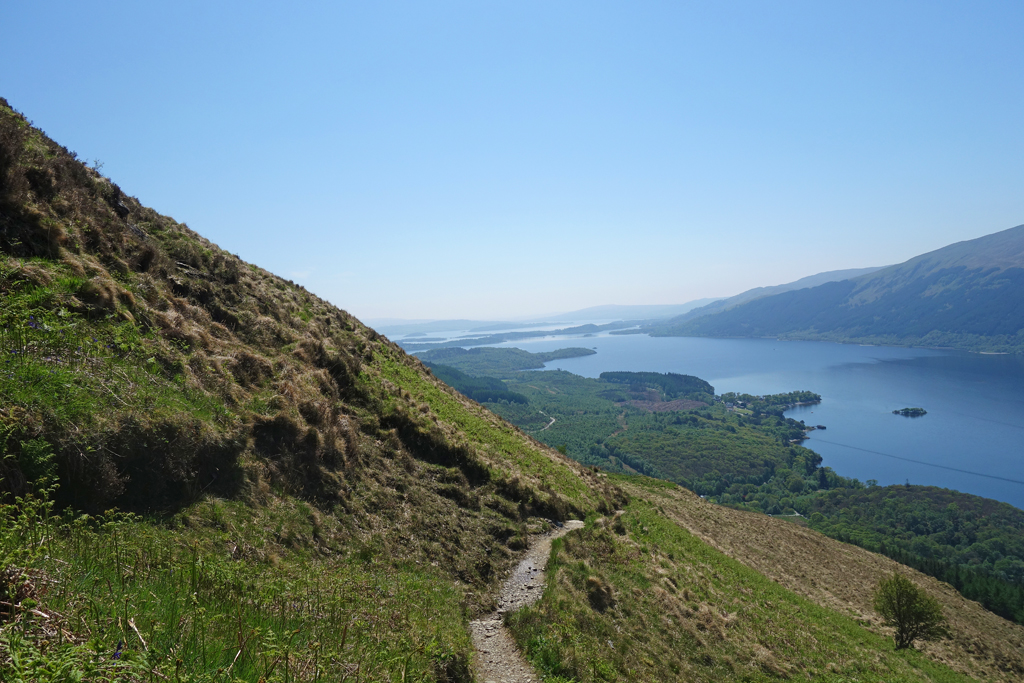 The path is relentless and does nothing but climb. On any other day this wouldn’t have been a problem but on this day? I was struggling. The sweat was on my brow and my pace was slow. I was taking frequent breaks not for my legs but to try and cool down. When I had started I noticed two other walking parties: a fellow on his own and a young couple all ascending with me and we were all very slow. I noticed the two groups taking frequent stops also. Ben Lomond was going to be a slog. A long, slow, slog.

Eventually the path reaches a stile and you are greeted with Ben Lomond. The rocky ascent looked wonderful but I knew I would need to rest before I attempted it. However, these thoughts were premature as I still had the Ptarmigan ridge on the left to conquer. 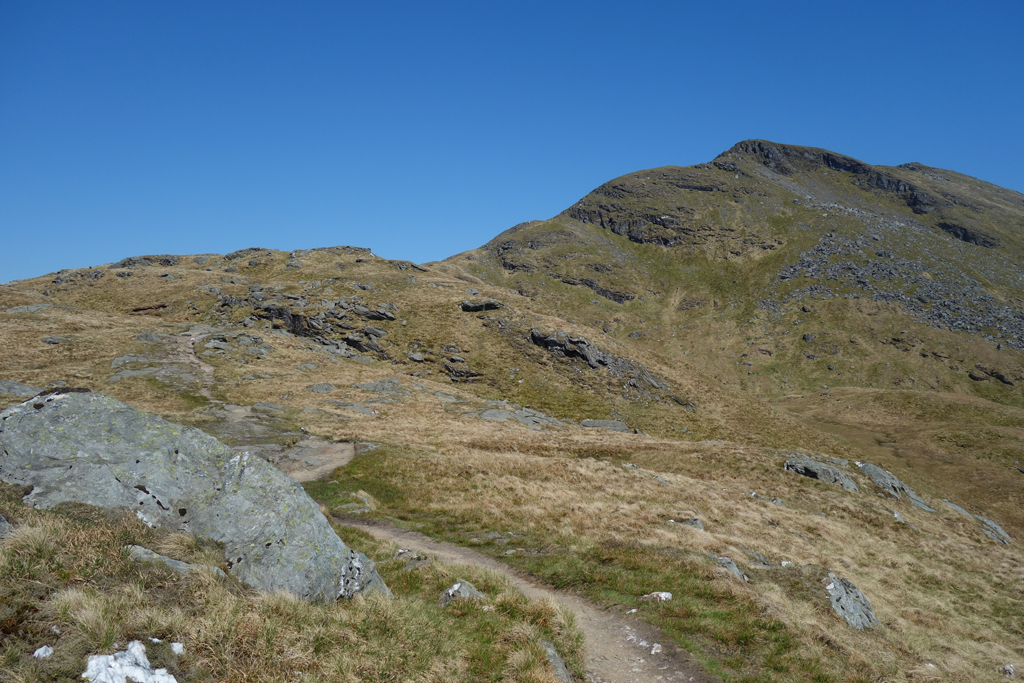 The Beautiful Geology of the Route 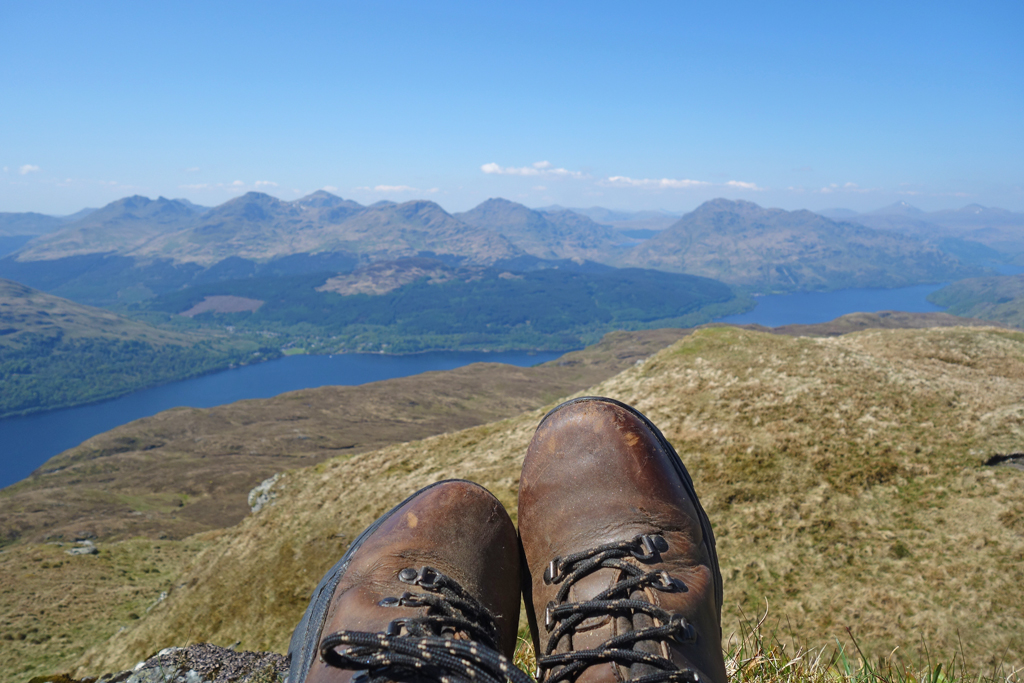 A Nice Spot for a Break

I decided to take a break on the top of Ptarmigan Ridge. The rocks and boulders were only getting more pronounced, there was a small lochan and the views were stunning in all directions…and I wasn’t even on the summit yet!

I was desperately trying to ration my water. My trusty water bottle was worryingly low and I hadn’t reached the summit of Ben Lomond yet. I decided to have an apple and a good rest before assaulting Ben Lomond itself.

One quirk of the day was the couple I had seen earlier had vanished behind me and it was just myself and the other lone walker heading for the summit. We had overtaken each other numerous times, passing each other as we took breaks, and had exchanged numerous motivation quips for each other. As I was enjoying my apple and the view, I glanced over and noticed that he was doing the same! We were beginning to resemble a red-faced, sweaty relay team.

The only other people we saw was the steady stream who had ascended via the tourist route and were descending via Ptarmigan Ridge. I think some of them may have suspected I was loopy for ascending this way on such a warm day. Regardless, I had to press on and soon I was starting the ascent of Ben Lomond. Even in the baking heat, the rock formations were gorgeous. 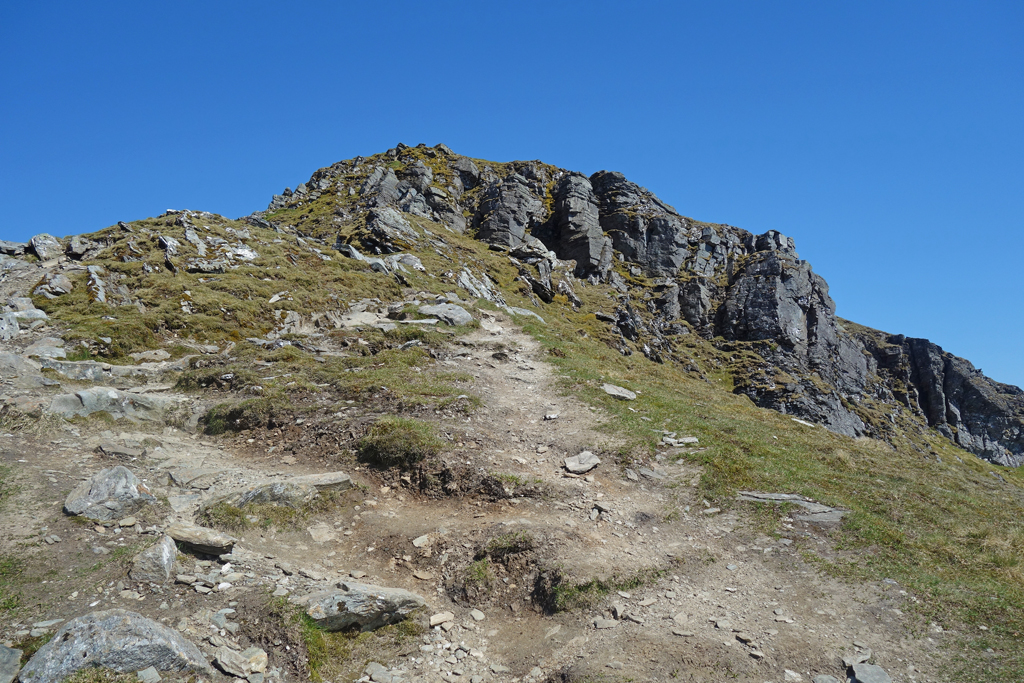 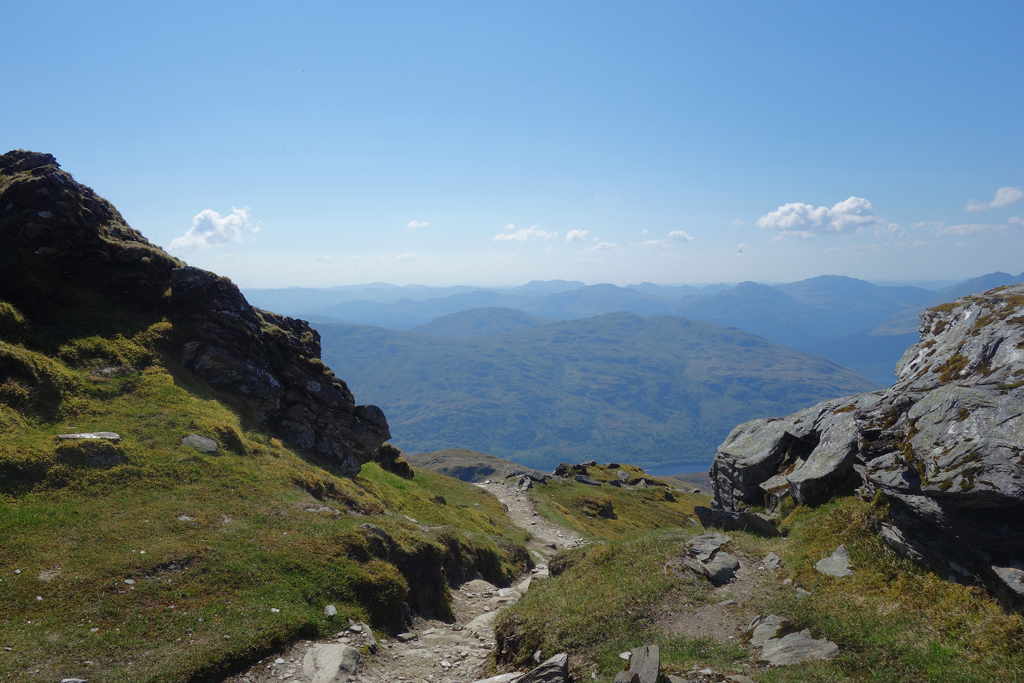 It took quite a while, with a lot of pausing, but eventually I came over the ridge and onto the summit of Ben Lomond. The effort was worth it. The views stretched in all directions and the beautiful day just made it better. 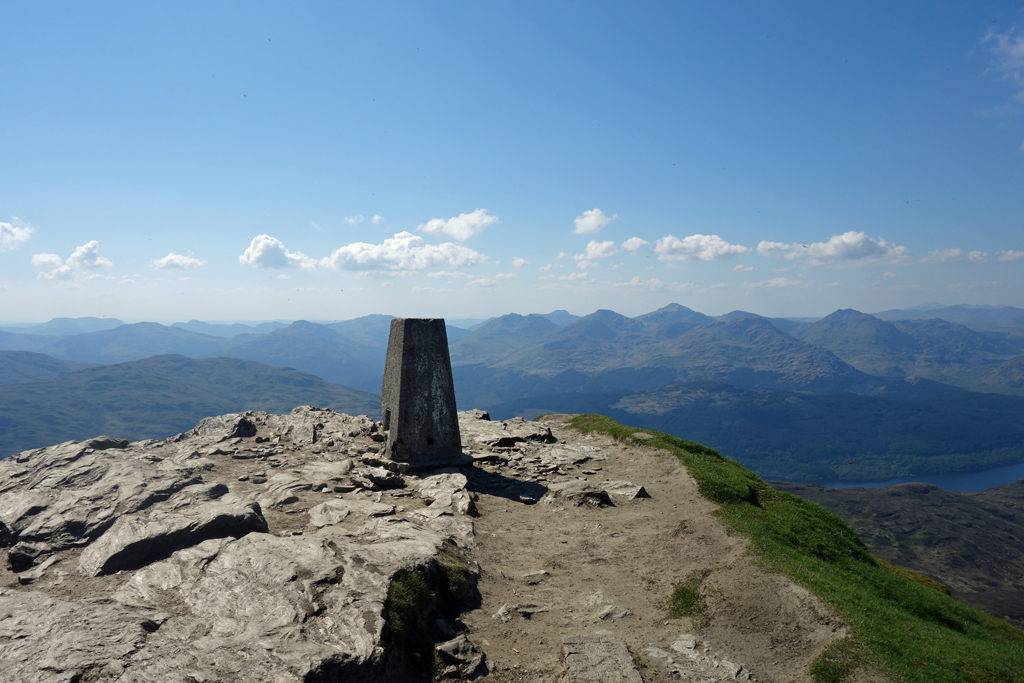 The Summit of Ben Lomond 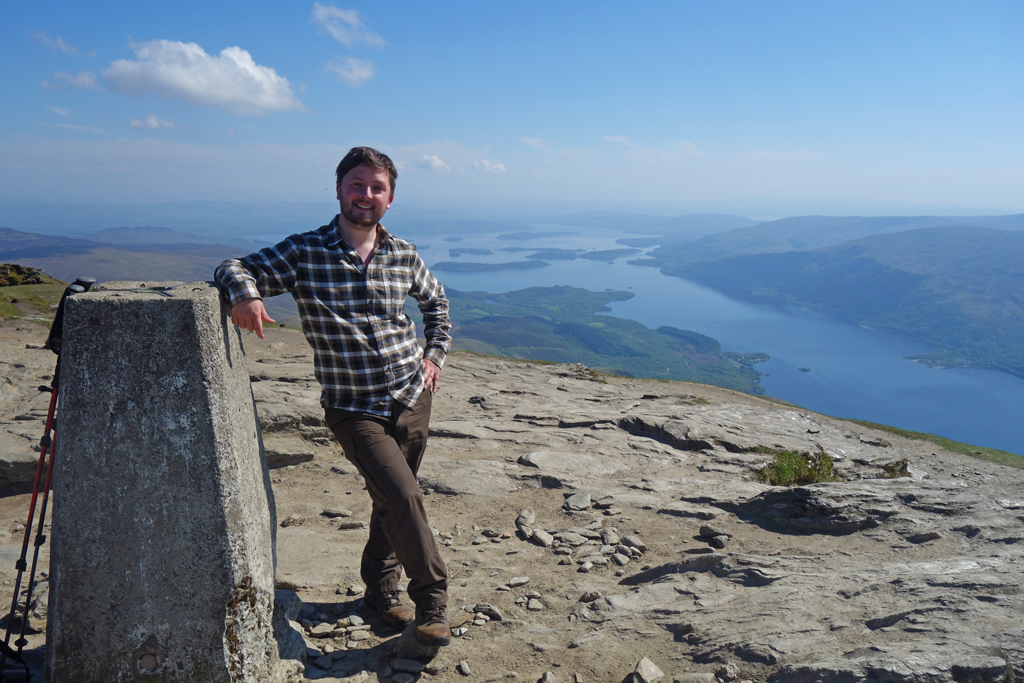 Trying to Look Cool While Melting

I spent quite a while on the summit. I was enjoying the views and I was also recovering from the ascent. I finished off the rest of my water, had a quick bite to eat and decided to saunter back down. One large descent sounded wonderful at this point and I had every intention of taking it easy: my water bottle was empty and the heat hadn’t subsided. 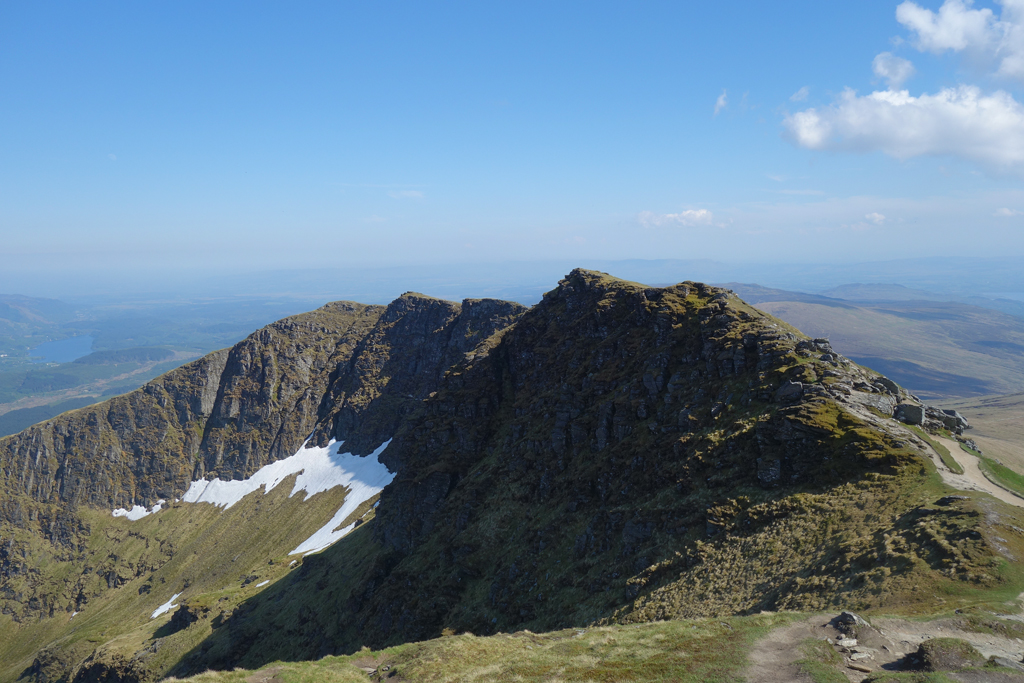 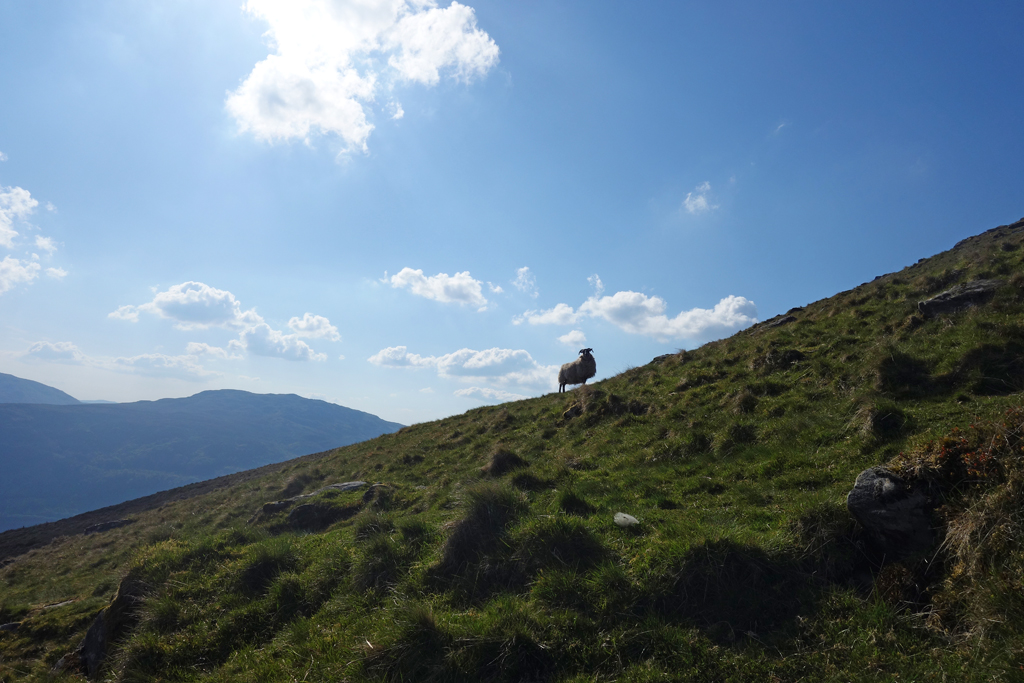 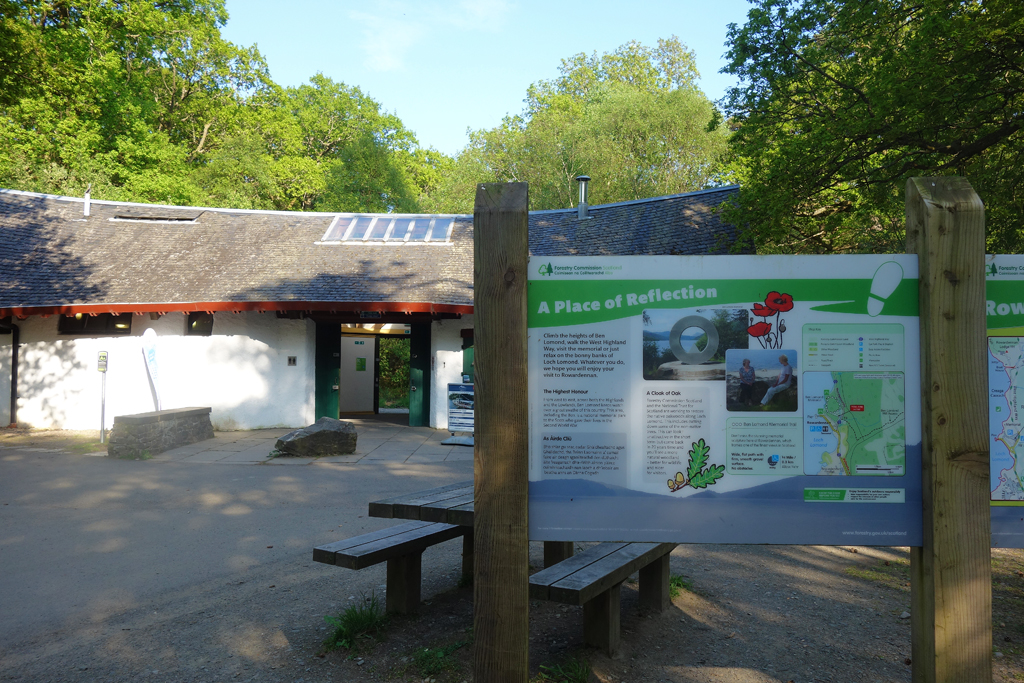 A Place of Reflection

The walk back was much easier on clear, broad paths and with a steady descent. My only concern was my increasing thirst! However I remembered the visitor centre back at the car park which had fresh tap water in the toilets: a life saver indeed!

I’d had a great day on this hill, if I had perhaps pushed myself a little hard in the baking heat. The views were tremendous, the scenery was beautiful and thanks to doing the walk via Ptarmigan Ridge, it offered enough peaceful moments throughout the day for some relection and introspection.

I’d thoroughly recommend it. Even if you don’t plan on bagging Ben Lomond, the car park has picnic tables and toilets and beautiful views. Also, the drive to it offers the chance to stop and some very pretty Scottish villages. It’s a beautiful area.